Rhizobacteria (PGPR) that promote the plant growth are essential component of sustainable agriculture. Pea (Pisum sativum L.) root nodule Rhizobium leguminosarum bv. viciae ten strains were cultured at two different temperatures (28°C and 45°C).  Out of eight strains screened the three N25, N30 and N40 were temperature tolerant while only one strain (N40) showed tolerance to pH11. The growth of Rhizobium strain N40 at 45 °C was 96.8 percent as compared to the growth of the at 28°C. The temperature tolerant strain N40 produced maximum IAA and solubilized insoluble tri calcium phosphate compared to other strains and thus can be used microbial inoculant in biofertilizer technology.

Pea (Pisum sativum L.), an important leguminous crop belongs to family Fabaceae. China, India, Canada, Russia, France and the United States of America are the main pea countries (Food and Agriculture Organization, 2012). Plants are cultivated in temperate regions and during winter season in tropical countries. In India, the area under pea cultivation is about 275 thousand hectares which accounts 4.5 per cent global area under pea cultivation. Pea is an important nutritional pulse and the green peas contain a form of omega-3 fats alpha- linolenic acid (ALA). Rhizobia are the single largest contributor to the biological N2 fixation (Jason et al., 2012). Legume-Rhizobium interaction is a key model for understanding the molecular basis of communication which represents most studied one but not fully understood symbiosis (Sachs et al., 2013). Plant growth promoting rhizobacteria (PGPR) as a microbial inoculant provide an alternative to chemical fertilizers and pesticides. In recent years, the use of PGPR has increased the productivity tremendously worldwide (Asghar et al., 2002). Combination of PGPR and efficient strains of Rhizobium in integrated biofertilizer technology has enhanced the growth of pea by inducing nitrogen fixation and efficient symbiosis (Kaur and Khan, 2013). Inoculation of Rhizobium strains with high temperature tolerance and effective nodulation to enhance plant growth would be required to improve crop productivity under climate change scenario (Singh et al.,2013, Gray and Smith,2005).

High soil temperature poses a major problem for cultivation of legume crop. Temperature of the surface soil (5-10 cm) layer reaches up to 40-50°C in the arid zone of North West India in the summer months and the microbial inoculants are often exposed to high temperatures which adversely affect the survival of rhizobia strains in the soil and establishment rhizobia-legume symbiosis. The prolonged exposure to high temperature reduces the saprophytic survival of rhizobia in soil and effective nodulation (Kiran et al., 2007). Temperature affects Rhizobium-legume symbiosis in various ways such as poor infection of root hairs, differentiation of bacteroids in nodule and nitrogen fixation. As an important a biotic factor, temperature influences the plant growth, metabolic enzymes activity and uptake of nutrients and indirectly on the solute solubility, transport of ions, membranes permeability, density and many colloidal properties of matter in soil-water interface (Sardesai and Babu, 2001; Xie et al., 2013). Rhizobium is a mesophilic bacterium and the growth optimum temperature ranges from 25°C to 31°C (Somasegaran and Hoben, 1994) with the upper temperature limits ranges between 32 – 47°C (Munevar and Wollum, 1988). The climate of Varanasi is humid subtropical with high temperature ranges between 32 – 46°C in summer and 5 – 15°C during winter (Singh et al., 2012). In the present communication, isolation and screening of high temperature and pH tolerant strains of Rhizobium isolated from pea nodules have been described. Further, the growth promoting parameters such as IAA production and solubilization of phosphate were also investigated in selected strains.

The strains were identified by cross inoculation test and based on 16s rRNA gene sequence phylogeny following the standard protocol.

Pea plant seeds were inoculated with R. leguminosarum bv. viciae strains and nodulation was checked on slant culture at 45°C in a Growth Chamber. Also, the bacterized seed were grown in the sterilized soil in earthen pot to observed the nodule formation and growth of the host plant as compared to control.

Effect of high pH
Isolated Rhizobium strains were grown at pH 9 and 11 on YEMA plates to observe their pH tolerance. The pH was maintained with sodium hydroxide (NaOH) and stabilized with Tris-HCl buffer (10mM). The plates were incubated in a BOD incubator at 28°C.

/ml filter sterilized L-tryptophan at 28°C with continuous shaking for 48 hours. Cell biomass was centrifuged at 10,000 x g and the IAA produced (ml-1 culture) was measured by mixing 2 ml culture supernatant with 4 ml of Salkowski reagent (1 ml 0.5 M FeCl3 in 50 ml of 35% perchloric acid). The absorbance of color developed was measured at 530 nm after 30 min (Gordon and Weber, 1951). The amount of IAA produced was determined with the help of standard curve of IAA (10- 100 µg/ml) and calculated by equation, y = mx + c (in µg /ml)

The pea nodulating symbiotic bacterial strain was identified as Rhizobium leguminosarum bv viciae as revealed by 16s rDNA gene sequence phylogeny and the accession number of the strain is KT150239.1 which has been submitted in NCBI.

The growth of all the strains retorted at 45°C as compared to at 28°C, however, some of them could survive and grow well at 45°C. The growth recorded at 45°C was in decreasing order of N40>N25>N30>N39>N29>N42>N24 which indicated that strains N40 could be considered as the best temperature tolerant among the strains. The strains N13 and N16 failed to grow at 45°C (Table 1).

A nodulation test whether strain N40 is efficient for effective and competent symbiosis at 45°C was performed. The pea seed inoculated with strain N40 formed pink color nodules on slant culture in growth chamber at this temperature. Also, the bacterized pea seed formed effective nodules in sterilized soil in earthen pot and the growth of host plant was better as compared to control. A photograph showing nodulation on slant culture has been presented in Fig. 1 Fig. 3. IAA production by Rhizobium strains after 24 and 48 hours of incubation 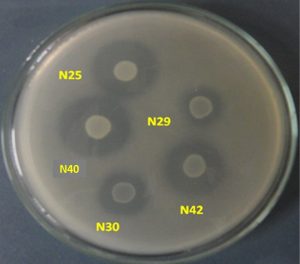 Strain UPMB19 significantly stimulated the seedling (7 days after transplanting) growth which could beat tribute to the higher N2– fixation and IAA production rates. Karnwal (2012) isolated Rhizobium strains from maize and wheat plant which were able to produce different amount of IAA in a range of 0.6 to 2.7 µg/ml. Rhizobium leguminosarun bv. viciae N40 formed effective pink color nodulation on pea plant and in slant the pod cultures. The growth and nodule formation were superior under both the conditions.

Global warming and frequent climate change are posing serious threat to the farmers world-wide. The farmers need such varieties which could tolerate high temperature and some time temperature and drought both. Thus, the microbial inoculant Rhizobium should also possess the temperature tolerance capacity. Our temperature tolerant R. leguminosarum bv. viceae strain N40 could tolerate 45°C temperature with a slight decrease in growth compared to mesophilic growth condition. Also, this strain has additional PGPR traits activity such as phosphate solubilization and IAA production. However, it is necessary to test the performance of strain N40 for PGPR activity under field condition before it is recommended for use as microbial inoculant. Among the R. leguminosarum strains, N40 strain could tolerate the performance to pH tolerance was high. The results suggested that the strain tolerant to one adverse condition may be also tolerant to other stresses. Under the climate change condition CO2 fertilization is expected to enhance the tremendous growth of the crop plants while the elevated temperature level may have adverse effect. The temperature tolerance strain under these conditions will be most fevoured choice for the farmers.

ACKNOWLEDGMENTS
The authors are thankful to Director, Institute of Agricultural Sciences and Head, Department of Botany, Institute of Science for providing the facility.

AUTHORS’ CONTRIBUTION
Every author has significantly contributed in experimentation and preparation of manuscript.