Methicillin-Resistant Staphylococcus aureus (MRSA) is an important cause of healthcare associated infections globally. New mecA homologue (mecC), was first reported in the UK and Denmark. The mecC mediated MRSA is resistant only to Β-lactams antibiotics and is sensitive to other antibiotics. Detecting the prevalence of mecC MRSA provides more options in treatment of MRSA infections. The aim of this study was to prevalence of mecC gene in clinical isolates of MRSA in Ain-Shams university hospitals & to correlate Minimal Inhibitory concentration (MIC) of Oxacillin with the mecC gene expression in MRSA isolates. Fifty MRSA isolates were collected from different intensive care units (ICUs) of Ain-Shams university hospital from April-December 2018. Methicillin resistance was detected by Cefoxitin disc, and antimicrobial susceptibility testing was done for all isolates and its results were interpreted according to Clinical & Laboratory Standards Institute (CLSI) guidelines 2018. Minimal Inhibitory Concentration of Oxacillin was detected using Oxacillin E-test and the results were interpreted according to the manufacturer’s instructions, then Polymerase Chain Reaction was done to detect mecA and mecC genes among MRSA isolates. Fifty isolates were identified as MRSA by Cefoxitin disc out of 163 samples. Twelve isolates were sensitive to Oxacillin while 38 isolates were resistant to Oxacillin. All isolates were positive to mecA gene while only 3 isolates were positive to both mecA and mecC genes. MecC is a new emerging gene responsible for methicillin resistance in staphylococci and was detected in 6 % of the isolates in this study.

Methicillin-Resistant Staphylococcus aureus (MRSA) is considered as one of the most common causes of community and hospital-acquired infections, leading to high morbidity and mortality. MRSA poses a serious problem in hospitals and its detection is crucial for infection prevention and control1.

Resistance to beta-lactams antibiotics is conferred by the presence of mecA gene, which encodes a penicillin-binding protein (PBP2’). mecA is part of a mobile genetic element called the “Staphylococcal cassette chromosome (SCC) mec.”2

The report of MRSA carrying a new variant of the mecA gene in 2011 in humans was highly significant. This new variant was named mecC gene. The presence of this gene poses diagnostic problems due to the probability of misdiagnosis of isolates as methicillin-sensitive S. aureus which may affect the results of MRSA surveillance3.

The mecC gene shared only 70% DNA identity with the mecA gene. MRSA isolates carrying mecC gene have been reported in different European countries and from several host species4.

There is limited available data about the prevalence of MRSA that carry mecC gene in Egypt, hence, this study was performed.

Collection of clinical samples
Different clinical samples were obtained from patients admitted to different ICUs of Ain-Shams university hospitals according to the regulations of scientific research Ethical Committee Faculty of Medicine-Ain Shams University during the period from April 2018 to December 2018. The collected specimens include blood, pus, sputum and swabs from burn and surgical wound.

For identification of Staphylococcus aureus isolates, the samples were inoculated on Blood agar and Mannitol salt agar, the colonies were identified based on morphology of the isolated colonies, microscopic examination of Gram-stained films, the β-hemolytic effect on blood agar and yellow colonies on mannitol Salt agar.

Then detection of MRSA strains was done by Cefoxitin discs 30µg (FOX) supplied by (Oxoid, Basingstoke, UK) using Kirbey-Bauer disc diffusion method and the results were interpreted according to CLSI guidelines 20188.

Detection of oxacillin minimal inhibitory concentration (MIC)
MIC was done for the Fifty MRSA isolates by using Oxacillin E-test supplied by LIOFILCHEM company, and the interpretation was done according to CLSI guidelines,2018.

PCR conditions for mecA gene9
Thermal cycler was adjusted to 2 minutes at 95°C for primary denaturation followed by 40 cycles of 45 seconds denaturation at 95°C then 45 seconds at 50°C for annealing, and 1 min at 72°C for extension. The amplified product was identified at 530 base pair (bp) by electrophoresis on 1.5% agarose gels and using 100 bp DNA ladder.

PCR conditions for mecC gene4
Thermal cycler was adjusted to 2 minutes at 95°C for primary denaturation followed by 40 cycles of 45 seconds denaturation at 95°C then 45 seconds at 60°C for annealing, and 1 min at 72°C for extension. The amplified product was identified at 137 bp by electrophoresis on 1.5% agarose gels and using 100 bp DNA ladder (Fig. 1 & 2). 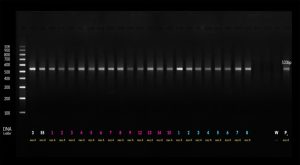 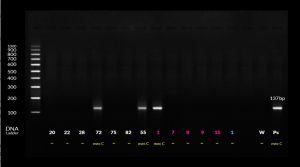 In this work, different clinical samples were collected from 163 patients admitted to different ICUs. From these samples, fifty isolates were identified as MRSA in which 25 isolates were collected from males (50%) and 25 from females (50%). Their age ranged from 18-75, and the mean age was 49.6 ± 13.1 years and all patients were under antibiotic therapy.

The results of antimicrobial susceptibility of MRSA revealed that the highest sensitivity values were found with Trimethoprim/ sulfamethoxazole (SXT), linezolid (LZD), and Chloramphenicol (C) (68% for each antimicrobial agent) while lower sensitivity (66%) was found with Rifampin (RA) followed by Levofloxacin (LEV) (62%). Sensitivity values dropped to 38% with Clindamycin (DA) followed by Doxycycline (DO) and Ciprofloxacin (CIP) with sensitivity in 36% of the isolates. The highest resistance pattern was to Erythromycin (E) and Penicillin (P) as 41 isolates (82%) were resistant to erythromycin and 48 isolates (98%) were resistant to Penicillin (P) as shown in Table (1).

Table (1):
Frequencies (n) and percentages (%) for antimicrobial susceptibility of MRSA arranged from highest to lowest sensitivity.

MRSA infections are well established in both the healthcare setting and in the community. MecC is a new emerging gene responsible for methicillin resistance in staphylococci. The mecC MRSA produces a characteristic antimicrobial susceptibility pattern different from mecA MRSA as mecA MRSA typically displays resistance to both oxacillin and cefoxitin antibiotic. On the other hand, most of mecC MRSA show resistance to Cefoxitin and are therefore reported as MRSA, although it shows susceptibility to Oxacillin 5.

In this study, the highest susceptibility of MRSA strains was found to Trimethoprim/ Sulfamethoxazole, Linezolid and Chloramphenicol antibiotic (68% for each antimicrobial agent) While lower susceptibility was found with Clindamycin (38%) followed by Doxycycline and Ciprofloxacin (36% for each). The highest resistance pattern was to Erythromycin (82%) and penicillin (98%). This goes in accordance with a study done in Egypt by Abdel-Maksoud et al. in 201610 who reported that 100% of all tested isolates were resistant to Penicillin and 70.5 % were resistant to Ciprofloxacin and 64.4% were resistant to Erythromycin and highest susceptibility was to Trimethoprim/ Sulfamethoxazole, and Rifampicin.

Also, Al-Zoubi et al in 201711, reported that the highest susceptibility of MRSA isolates was found to Linezolid (96.5%) and Chloramphenicol (86.7 %) and medium sensitivity percentages were found to Clindamycin (54.9%), Gentamicin (47%) and Levofloxacin (42.5%) and highest resistance was to Erythromycin and Penicillin.

Regarding the minimal inhibitory concentration (MIC) using E-test, we found that 12 (24%) isolates were sensitive to Oxacillin and there were 38 (76%) isolates resistant to Oxacillin .on the other hand Saeed et al.in 201412 reported (1.2%) strains were sensitive to oxacillin using phenotypic methods in the United Kingdom and Cikman et al. in 201913 reported that all tested MRSA isolates were phenotypically resistant to oxacillin and Cefoxitin.

One of the first papers published to discuss the emergence of mecC gene in MRSA isolates versus mecA gene was conducted in Denmark 2011 by Garcia-Alvarez4 who found that mecC gene represents 2.8% of MRSA isolates while in the current study we found 6% mecC gene of MRSA isolates, the author of the previous study contributed this result to rural areas as the detection of mecC gene was linked to livestock.

On the other hand, Rania et al. in 201714 in Egypt conducted a similar study showed that of 150 isolates (110 MRSA + 40 MR-CoNS) all were subjected to PCR where no MRSA isolates carrying mecC gene were reported detected. This was similar to Ganesan15 who also did not detect mecC gene in his study. Another study done in Egypt by Khairalla et al. in 201716 reported that all the MRSA isolates included in the study contain the mecA gene (n = 34, 100%), while mecC was not identified.

In conclusion, this work is one of first report of presence of mecC gene in MRSA isolates in Egypt, mecC gene was detected in 6% of MRSA isolates included in this study and this isolates also carry mecA gene, although this percentage is not alarming, further studies testing for mecC gene in larger scale using different primer sets for mecC, may increase the probability to detect mecC gene especially in rural areas as the presence of mecC is linked to livestock.

ACKNOWLEDGMENTS
The authors are grateful to members of intensive care units of Ain Shams University hospitals, for their support to carry out this study.