Western Ghats are one of the biodiversity hotspots of the world which stretches parallel to west cost of India. Climatic conditions are congenial for establishment of diverse mushroom flora. In this study, five Jelly mushroom species were collected during the monsoon season of 2015 from the Western Ghats region of Karnataka (India).  Of the five Jelly fungi collected, two species were identified as Auriculariadelicata (brown strain) and A. delicata(white strain) based on phenotypic characters. The other three Jelly fungi were identified using Internal Transcribed Spacer (ITS) region. The sequence alignment made with available data base in the National Centre for Biotechnological Information (NCBI) showed 89%, 99% and 96% homology with Auriculariapolytricha,Tremellafuciformisand Dacryopinaxspathularia respectively.

Western Ghats is a mountain range that runs parallel to the western coast of the peninsular India starting from Maharashtra, Goa, Karnataka, Kerala and ending at Kanyakumari in Tamilnadu which covers about 1,60,000 square kilometers. Western Ghats is the one of the eight hottest hotspots in terms of numbers of endemics and endemic species/area ratios for both plants and vertebrates, and habitat loss (Myers et al., 2000).  The region receives ample of its rain from south-west monsoon which makes wettest season from June to October. Annual rainfall on Western Ghats averages 2500 mm.  However, at Agumbe (place) rainfall exceeds 7600 mm (Dahanukaret al,. 2004).  The central Western Ghats of Karnataka, known as ‘Sahyadri’, represents a long mountain chain along the west coast of India and encompass the districts namely Chikmagalur, Shivamogga, Udupi, Dakshina Kannada, Uttara Kannada, Hassan and Coorg (Kumar et al., 2014).  Humid weather and high rainfall during monsoon is congenial atmosphere for the establishment of many kinds of mushroom flora which includes edible, medicinal and poisonous types.

Mushroom is fascinating fleshy fruiting body structure of a fungus belongs to class Basidiomycetes and Ascomycetes (Arora, 1986).  The species diversity of fungi and their natural beauty occupy prime place in the biological world and the western ghats of India is a cradle of these species.  Defining the number of fungi on earth has been a point of discussion and several studies have focused on enumerating the World fungal diversity (Crouset al., 2006).  Only a fraction of total fungal wealth has been subjected to scientific scrutiny and mycologists continue to unravel the unexplored and hidden wealth.  One third of fungal diversity of the globe exists in India and of this only 50 % are characterized so far (Manoharacharyet al., 2005).  This study reports five Jelly mushrooms from Western ghats of Karnataka.

The Jelly mushrooms were collected from Western Ghat districts of Karnataka viz., Hassan, Shivamogga and Dakshinakannada during the monsoon 2015.  Field information such as habitat, abundance and phenotypic characters like size, shape, color of the fruiting body were recorded (Arora, 1986).  The genomic DNA of mushrooms was extracted from tissue by using CTAB lysis buffer (Doyle and Doyle, 1987).   Stipe (stem) tissue of mushroom (0.2 g) was ground into fine powder using liquid nitrogen and the sample was transferred into 1.5ml of extraction buffer and incubated at 65oC for 45 minutes.  Equal volumes of chloroform: Iso-amylalchol (24:1 v/v) was added and mixed by inverting by tubes.  These tubes were centrifuged at 10000 rpm for 10 minutes.  Clear supernatant was collected by removing jelly layer at the top and DNA was precipitated by adding chilled isopropanol.  The pellet was washed with 70% ethanol and dissolved in Tris-EDTA buffer.  The concentration and purity were measured by using spectrometer (Eppendorf).

Amplification of ITS region was done by using ITS1 (Forward) 5’TCCGTAGGTGAAC CTGCGG3’ and ITS4 (Reverse) 5’TCCTCCGCT TATTGATATGC3’ primers (Rajaratnam and Thiagarajan, 2012).  Polymerase chain reaction was performed for 40µl reaction mixture containing 4µl of 1x Taq buffer with MgCl2, 4µl of dNTPmix, 1µl each of forward and reverse primers, 0.6µl of 3U Taq DNA polymerase, 1µl (50ng) of template DNA and 28.4µl sterile water.  Amplification was carried out with an initial denaturation at 94oC for 4 minutes, followed by 35cycles of denaturation at 94oC for 1minute, annealing at 59oC for 30 seconds and extension at 72oC and a final extension at 72oC for 10 minutes.  Amplified product was separated by 1% agarose gel electrophoresis and documented using gel documentation unit (Alpha Innotech).  The amplified band is isolated by using Genjet Elution kitTM (Thermo Scientific).  The purified PCR product was sequenced (Scigenom Pvt. Ltd., Kerala).  The BLAST search for sequence homology was performed with the sequence data available at National Centre for Biotechnology Information (NCBI) for identification of the three mushrooms. 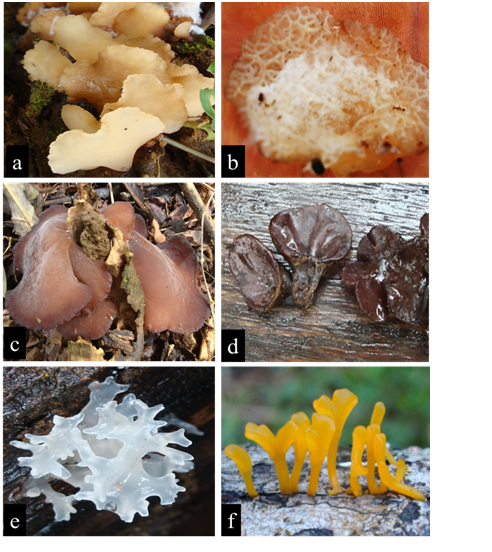 The white jelly fungus was collected from forest of Sakaleshpur, Hassan district and the brown fungus was from Dakshinakannada district of Karnataka.  Fruiting bodies of the two jelly mushrooms was soft, rubbery/gelatinous; translucent.  One strain was white in colour and the other was dark brown (Fig.1a and 1c).  The fruit body was sessile to substipitate and reniform to semicircular measuring from 6 to 10 cm diameter.  The pileus with trnslucent hairs at the dorsal side, hymenium conspicuously meruloid to porose reticulate with veins (Fig.1b) and pale hyaline cream colour. The mushroom grows gregariously on decaying wood. Pileus made up of densely compacted gelatinised hyphae with cuticular hairs with rounded tips.  The basidia were cylindrical 42 × 4µm in size with 3 transverse septa.  The spores are allantoid with 2 – 3 prominent oil globules measured 11 × 5 µm.  Based on the above phenotypic characters both the strains of mushrooms were identified as Auriculariadelicatawhite and brown strains (Sarmaet al.,2010).

Fruiting body of the cloud ear fungusdocumented from Dkshinakannada region of Karnataka was gelatinous (Fig.1d), laterally attached to the dead wood.  Stipe is short and the fruiting body was dark brown.  Basidia cylindrical, hyaline, tri – septate, spores are hyaline, reniform to allantoid, size was 15 × 4–5 ìm.   Pileus was exactly look like animal’s ear (Sarmaet al., 2010).   Amplified product of ITS region sequenced and blast searched at NCBI GenBank (Fig.2) showed 89% homology with Auriculariapolytricha. Thus, the mushroom was identified as A. polytricha.

The fruit body of Snow fungus documented from Shivamogga district was gelatinous, white and glassy or translucent (fig.1e). Diameter of the fruiting body ranged from 3.5 to 9.5 cm.  The fruiting body was erect with branched fronds.  Hyphae are clamped and occur in a dense gelatinous matrix.   Haustorial cells arise on the hyphae, basidia with oblique to vertical septa.  The spores are ellipsoid, smooth, measured 8 X 6 ìm.   Based on these phenotypic characters the mushroom was identified as the genus Tramella(Moore and O’Sullivan, 2014).   Further the mushroom species was identified by using ITS region sequence.   The sequence of the fungus when blast searched with NCBI GenBank showed 99% homology with Tremellafuciformis(Fig.3).Thus, the mushroom was confirmed as T. fuciformis.  Similarly, Spatula-shaped yellow jelly fungus (Fig.1f) was collected from Dkshinakannada and identified.  Spores of this fungus were ellipsoid with smooth-surface and translucent.   Average size of the spore was 8 X 3ìm, grow in clusters. The ITS sequence (Fig.4) of 447 bp showed 96% homology with Dacryopinaxspathulariaof the class Dacrymectes.   The sequences of the three mushrooms were submitted to NCBI GenBank and accession numbers(Auriculariapolytricha KX603667; T. fuciformis. KX603666; D. spathulariaKX603668) were obtained.

There are reports on documentation of mushrooms from forests of Western ghats but limits the record of Jelly fungi (Pandeyet al., 2012).  Ushaet al., (2014) reported the occurrence of T. fuciformis from Kodagu region of Karnataka.  Tremellafuciformishas both medicinal and culinary uses. The polysaccharides and steroids it contains reportedly have antitumor and anti-inflammatory properties.  The white jelly fungus can be included in desserts and added to soups and other dishes (Hall et al., 2003) and the fruiting bodies of A.polytricha are useful adsorbent to remove emulsified oil from water (Yang et al., 2014).  However, occurrence of Jelly mushrooms were reported to be one percent of the total mushrooms (Krishnappaet al., 2014).   Therefore, there is a need to explore more and more species of jelly fungi, culture and conserve them for further studies as mushrooms are fascinating creatures in nature.

Authours are grateful to the Department of Biotechnology, Govt. of India, New Delhi (Ac No. BT/INF/UAS Bangalore/2011) for financial support to carry out this research.