The aim of this work was to develop bionanocomposite films based biopolymer GG and TiO2-NRs for active food packaging. The TiO2-NRs were incorporated as antimicrobials agent into GG via solvent casting method. The films appearance was have 94 % of transparency. SEM micrographs indicate that the TiO2-NRs were successfully incorporated and attached to the surface of developed GG films. FTIR results revealed the interaction between TiO2-NRs and hydroxyl group of GG polymer. XRD results showed the crystalline peaks of TiO2-NRs and amorphous peaks of GG+TiO2-NRs films. The thermal stability of GG films were increasing by incorporation of TiO2-NRs materials. The GG+TiO2-NRs films showed good antibacterial activity against Gram-positive (Staphylococcus aureus (S. aureus) and Streptococcus (strep.)) and Gram-negative (Escherichia coli (E. coli) and Pseudomonas aeruginosa (P. aeruginosa)) and potentially used as antibacterial packaging films.

The most favourable biopolymers that are currently used commercially and have been extensive study is gellan gum (GG). GG is an anionic straight chain biopolymer containing β-D-glucose, α-L-rhamnose and β-D-glucuronate residues1 and usefulness industrially due to its unique structure and physical properties. Previously, GG has been approached in wound healing study2,3 as well as candidate material for tissue engineering application4 and hold a vital role in pharmaceutical. Since 1992, this materials were approved to be utilized in food industry by the US FDA (United States Food and Drug Administration) and the EU (European Union) regulation classified as  E 415 5. GG polymers have been used in varied application included as agar replacement due to its excellent gelling properties as well as highly purified polysaccharide. It has high potential to be apply in industrial as a high-viscosity biogum, a suspending agent and acts as a gelling agent6. Not limited to that, GG has been utilized for personal care included in cosmetics and toiletries products7. It has thermal stability, clarity and compatibility with nutrient additives8. Thus, it’s stable at varied temperatures and can offer an excellent stability for varied applications.

TiO2 nanostructured can be found in four dimension which is 0-D, 1-D, 2-D, and 3-D. It have been create a huge impact on the nanodevices, nanocomposite materials, nanoelectronics, and etc. 9 due to their unique and large surface areas properties. Apart from that, due to the high surface area as well as provided enough absorption sites for all involved molecules in a small space, the TiO2 nanostructured materials become subject of interest in the research field10. Nowadays, the development based on the nanostructured are getting highest ranking over the world either in nanotechnology or nanobiotechnology disciplinary due to their peculiar and fascinating properties. The utilization of TiO2 nanostructured have been explored widely as a polymers, metals, and ceramics. Their applications not only limit to against human pathogen likes bacteria but also to fight cancer and its was become focal subject in research and applications due to their potent bactericidal activity to against a resistant strains of pathogens. TiO2 is one of the inorganic materials that have getting special interest to be applied in inorganic and organic nanocomposites11. Among the versatile of TiO2 nanostructured family, TiO2-NRs have become subject of interest and it’s typically in 1-D formation and consists of solid elongated structure. Previously, TiO2-NRs have been used in development of glucose biosensor12, facilitate the DET (direct electron transfer) of GOx (glucose oxidase) 13,14, in immunotherapy for cancer therapy application15, and also as a photoelectrochemical immunosensor16. Not limited to that, due to its high extraction proficiency, enhanced for mechanical strength, and outstanding in stability, TiO2-NRs display an excellent extraction performance as solid-phase microextraction (SPME) coatings17. Above all, TiO2 is a popular substance in varied application regarding to their properties which is chemically and thermally stable, nature friendly, be biocompatible, cheap, and anti-corrosion.

Therefore, in this study, GG and TiO2 nanostructured was became an interesting candidate material to be explored as an active food packaging regarding to the environmental concern. The developments of biomaterials as an active food packaging were important in reducing the environmental pollution that causes from accumulation of synthetic packaging. Thus, GG+TiO2-NRs films were prepared and characterized using UV, SEM, FTIR, XRD, and TGA and the performance of antibacterial properties also were evaluated.

Prior to the fabrication of film, TiO2 nanorods was prepared using hydrothermal method18. In order to prepare GG incorporating 1wt% TiO2-NRs (GG+TiO2-NRs) film, 0.01 gram of synthesized TiO2-NRs was added into the 100 ml of GG solution. The GG solution was prepare earlier by dissolving 1 gram of GG into 100 ml distilled water. The solution was stirred continuously for 2 hours at 70 °C. Then the homogeneous solution was poured into the casting plate and was dried at 50 °C for 24 h. The films were preconditions for ≥48 h in the humidity chamber at controlled conditions (relative humidity 50 % at room temperature). The pristine GG films were fabricated using similar technique excluding the addition of TiO2-NRs.

The antibacterial activity of nanostructured TiO2 materials were established by inhibition ring method under UV light irradiation conditions using four types of bacteria which is S. aureus, Strep., E. coli, and P. aeruginosa19. At 0.5 McFarland standards, inoculants of each bacteria were evenly spread in sterile petri plates contained the MH agar. Antibacterial properties were evaluated by measuring the transparent antibacterial circle diameter of the materials surrounding bacterial growth after 24 hours. Fig. 1a shows the photo images of gellan gum (GG) and gellan gum with the addition of titanium dioxide nanorods (GG+TiO2-NRs). The diameter and thickness of both films were almost similar which are ~9 cm and ~60 μm, respectively. The optical transparency of films was evaluated by UV–visible analysis. The GG and GG+TiO2-NRs films were transparent with transmittance values were 98 % and 94 %, respectively (Fig. 1b). Fig. 2a displays the TEM images of TiO2-NRs samples. Its exhibits elongated nanostructures (rod-like particles) proposed that the nanorods were successfully obtained. The diameter and length of rod-like particles was found to be 25 – 50 nm and 2.25 – 3.25 µm, respectively. Fig. 2b shows smooth and homogeneous surface of GG films. In contrast, less homogenous surface was observed on GG+TiO2-NRs films attributed to the agglomeration of TiO2-NRs into and onto GG film and contributed to the rough film surfaces that may beneficial for antibacterial activity. The FTIR spectra of TiO2-NRs, GG, and GG+TiO2-NRs films are demonstrated in Fig. 3. A broad peak below 1000 cm-1 has been detected in the TiO2-NRs and GG+TiO2-NRs spectrum, which is attributed to metal-oxygen (Ti-O) stretching mode. Apart from that, a broad peak also was display by GG spectra assigned to OH stretching vibrations modes at 3408 cm-1, carbonyl group at 1666 cm-1 and C-C aromatic stretching at 1424 cm-1 20. FTIR spectra of GG films also show a prominent peak at 2936 cm-1 and 1043 cm-1 due to the C-H stretching modes and glycosidic bonds linking to galacturonic sugar unit in GG chain 21. Last but not least, another peak was appeared at 692 cm-1 attributed to the C-H bending mode. Similar peaks were observed in GG+TiO2-NRs films as GG, with slightly different in intensity and peak positions due to the interactions among TiO2 nanostructures and GG biopolymer chain. Fig. 4 displays the XRD (X-ray diffraction) difractogram of of TiO2-NRs, GG, and GG+TiO2-NRs films. TiO2-NRs presented sharp peaks at 25°, 38°, 48°, 54°, 55°, 63°, 69°, 70°, and 75°  assigned to (011), (004), (020), (015), (121), (024), (116), (220) and (125) planes of anatase TiO2 22. The sharp peaks of anatase TiO2 proposed that crystalline TiO2-NRs were produced in this study. In contrast, broad peaks which are assigned to amorphous behavior were found at 18° and 21° for both GG and GG+TiO2-NRs films. These peaks were corresponded to the characteristics of GG chains aligned through intermolecular interactions. Additionally, for GG+TiO2-NRs films, one peak with low intensity at 25° was appeared suggesting that TiO2-NRs were successfully incorporated into GG films. This crystalline peak appeared at low intensity due to the small amount of TiO2 nanostructures incorporated into GG films and it more apparently appear at high concentration of TiO2 nanostructures. 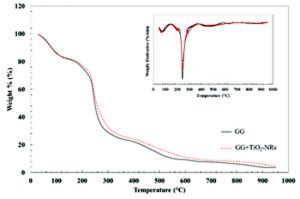 Fig. 5 shows the thermogram of GG and GG+TiO2-NRs films. At the 1st stage, the thermal stability shows 18 % of weight loss due to the moisture removal from GG and GG+TiO2-NRs surface. A weight loss at 58 % (GG) and 54 % (GG+TiO2-NRs) in 2nd stage assigned to the depolymerisation and degradation of GG biopolymer chain. A broad decomposition range of GG was observed suggesting to the homogeny distribution of TiO2-NRs in the nano-composites films. It might be due to the hydrogen bonds formation as well as coordinate interaction between TiO2 and GG. Addition of TiO2-NRs into GG increased the temperature to end up the degradation step regarding to the final temperature were verified at 390 °C for GG+TiO2-NRs films showed it contains higher heat resistant. Addition of TiO2-NRs exhibits better outcome in thermal stability regarding to the certain degree of interaction between GG and TiO2-NRs as revealed by FTIR spectroscopy. Fig. 6 shows no antibacterial activities were found after 24 h incubation of pure GG film for all the bacteria. However, the inhibition zone was recorded using GG+TiO2-NRs films at 10±0.35 mm, 12±0.06 mm, 11±0.06 mm, and 10±0.38 mm against S. aureus, Strep., E. coli, and P. aeruginosa which is comparable with penicillin control sample (Table 1). Good antibacterial activity by GG+TiO2-NRs films was due to the presence of TiO2 nanostructures which is promoted the ROS (reactive oxygen species) generation, release of metal ion, malfunction of membrane system, and  internalization of nanoparticles23. With the present of UV light, the TiO2-NRs that were incorporated into GG films produced ROS species (eg. HOO•, HO•, and •O2−) from O2 and H2O through reduction reaction. The electron in the TiO2 conduction band will leave a positive hole in the valence band when the TiO2-NRs are irradiated by UV. Then, the photo-generated electron will react with molecular oxygen as well as with water to produce superoxide radical anions (●O2−) and hydroxyl (●OH) radicals, respectively. Therefore, these reactive radicals will executed the bacteria by decomposed the organic compounds in bacterial cells24-28. The result obtained suggesting that, TiO2-NRs is a promising antibacterial agent as GG+TiO2-NRs films exhibited excellent antimicrobial property.

GG+TiO2-NRs film was successfully developed by solvent casting technique. The transparency of films was reduced from 98 % to 94 % when the TiO2-NRs were added into GG films. FTIR, XRD, and TGA results obtained exhibited the interaction of TiO2 nanorods with the GG polymer chain. SEM micrograph shows the presence of TiO2 nanorods on the surface of film and were enhanced the antibacterial activity.

ACKNOWLEDGMENTS
The authors are grateful to Universiti Malaysia Terengganu (UMT) for providing the facilities to carry out this project and Ministry of Education, Malaysia for the financial support vote FRGS 59571 and MyBrain 15.

FUNDING
This study was supported by research grant FRGS 59571 and MyBrain 15 from Ministry of Education, Malaysia.