Multivariate statistical models were utilized to identify the interaction between the inhibitory activity and the molecular properties of the different antimycotics against Microsporum canis. Information on the inhibitory potency against M. canis and molecular properties of antifungal agents were obtained from literature. The relationship between the inhibitory potency and the molecular properties of the different antimycotics against M. canis was established using multiple linear regression analysis (MLRA) and principal component analysis (PCA). Three major descriptors: topological polar surface area, molecular weight, and rotatable bond count of the antimycotics were identified to confer inhibitory action against M. canis using MLRA (r2=0.8968, p<0.0001) and PCA (95.86% total contribution rate). Both MLRA and PCA as statistical approaches demonstrate their potential as tools in computational structure design and for possible synthesis of next generation antimycotics as more effective treatments of fungal infections.

Superficial fungal infections, which are commonly caused by dermatophytes including Microsporum canis, are treated with topical antimycotics, but resistance to these topical agents was observed in cases of tinea unguium and tinea capitis which necessitate the use of systemic antifungal drugs.1-3 Molecular properties such as topological polar surface area, heavy atom count, hydrogen bond acceptor and donor counts, rotatable bond count, complexity, lipophilicity, and molecular weight were important descriptors in assessing the inhibitory effect of drugs. Since statistical modelling is a very important tool in predicting biological activities of compounds4, antifungal drugs against M. canis were statistically evaluated using multiple linear regression analysis (MLRA) and principal component analysis (PCA). In drug design, establishing the relationship between the activity and the properties of a compound is of utmost importance.5 The generated relationship will likewise unveil the relevant molecular properties of the existing antifungal drugs that would account for their inhibitory action against M. canis. Findings of the investigation would offer additional insights relevant to the synthesis of new derivatives of antimycotics as more effective treatments of dermatophytoses.

Multiple Linear Regression Analysis and Principal Component Analysis
For the model construction, quantitative relationship between the inhibitory activity of antimycotics and their molecular properties was established using MLRA. This multivariate statistical approach is a computational method frequently utilized in drug design owing to its simplicity and reproducibility.23 In variable selection, backward elimination was employed in the construction of the regression model. The adequacy of the obtained regression model was evaluated using the computed r2, squared correlation coefficient24. In addition, bivariate correlation studies examined the presence of outliers, linearity, normality, independence, homoskedasticity, and multicollinearity among the significant molecular predictors.

To assess the similarity among the antimycotics and to identify possible correlations in the different drug properties, principal component analysis was employed. Using this multivariate statistical approach, information regarding the data set is summarized into principal components where each component contains uncorrelated linear combinations of variables having the maximum variance.25 Among correlated variables, linear transformation was performed and these transformed variables were then sorted in order of decreasing variance. In the present study, principal components with loading eigenvalues greater than 1.0 were included. An absolute value correlation coefficient of at least 0.39 between the index and its principal component retains the molecular property within the given component. Data analyses were performed using STATA® V12.0 at 0.05 significance level.

The computed loading values of the three principal components have contribution rates of 50.30%, 32.55%, and 13.01% (Table 2). Complexity, heavy atom and hydrogen bond acceptor counts, molecular weight, and topological polar surface area were in the 1st principal component. Lipophilicity and hydrogen bond donor count were in the 2nd component, while rotatable bond count was in the 3rd principal component. When PCA technique was used in assessing the inhibitory effect of the 16 antimycotics, comprehensive scores (range: 6.62-34.93) were obtained (Table 3). Relatively higher comprehensive scores were observed in systemic antifungal drugs compared with topical antimycotics.

Table (1):
Descriptors of the different antimycotics.

Table (4):
Correlational analysis on the molecular descriptors of antimycotics.

When preliminary analysis using stepwise backward elimination of MLRA was employed, heavy atom count, complexity, hydrogen bond acceptor and donor counts, and lipophilicity were removed from the full model. Topological polar surface area, molecular weight, and rotatable bond count were retained as significant independent variables accounting in the variation on the biological activity of these antimycotics against M. canis. For every independent variable included in the regression model, a minimum of five samples is required.24,26 Since there were only 16 available antimycotics in this study, the constructed regression equation included at most three molecular descriptors. The generated regression model (Eq. 1) has identified three predictors and is adequate (r2=0.8968, p=0.0000) in explaining the potency values (MIC, minimum inhibitory concentration) of the antimycotics against M. canis. The three descriptors were tpsa (topological polar surface area, p=0.005), logmw (molecular weight, p=0.000), and rbc (rotatable bond count, p=0.000), with rotatable bond count and molecular weight accounting to 79.65% of the fluctuations in the response variable (MIC). The negative coefficient of logmw suggests that increasing the molecular weight lowers MIC, thus improving the antimycotic potency. The positive coefficients for tpsa and rbc indicate that MIC increases as topological polar surface area and rotatable bond count increase.

After identifying the significant molecular descriptors, various assumptions of MLRA were examined. A large F-value, F(3,12)=34.74 (p=0.0000), would indicate that the constructed regression function satisfied the requirement for linearity. Independence of the error terms was likewise met (z=-0.52, p=0.60). The linear plot obtained between the inverse normal values and the residuals (Fig. 1) suggested normally distributed error terms (p=0.482), while test on homoskedasticity identified constant variance (p=0.936). The generated boxplot (Fig. 2) showed nonexistence of an outlier. Multicollinearity among significant molecular descriptors was not present since variance inflation factor (VIF) values were all less than 10 (logmw, 1.44; tpsa, 1.39; rbc, 1.16). 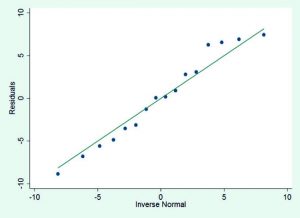 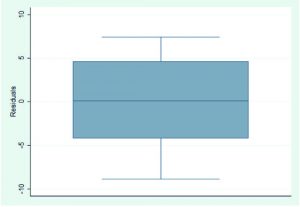 Molecular and structural properties of compounds were assessed based on their hydrogen bond acceptor and donor counts, molecular weight, complexity, rotatable bond and heavy atom counts, lipophilicity, and topological polar surface area. The present study identified molecular weight, rotatable bond count, and topological polar surface area as significant properties of antifungal drugs which confer inhibitory action against dermatophytoses particularly caused by Microsporum canis. In drug design, r2 is a useful determinant of model validity24 and a value of at least 0.6 is considered satisfactory27. In the present study, the regression equation is adequate to capture the functional relationship between the inhibitory activity and molecular properties of the antimycotics against M. canis.

Evaluation of the various descriptors of the antimycotics against M. canis revealed that molecular weight exhibited a positive correlation with heavy atom count, complexity, topological polar surface area, and hydrogen bond acceptor count. Molecular weight is a very important property especially in small molecule drug discovery28,29 because it affects several pharmacologic events30. Molecular weight of the antimycotics was directly correlated with molecular complexity and these molecular descriptors were identified as significant properties included in the first principal component. Molecular complexity is positively correlated with heavy atom and hydrogen bond acceptor counts, and accounts for various properties such as carbon hybridization, chirality, and aromaticity. Aromaticity is directly related with lipophilicity and albumin affinity.31 Aromatic molecules with more than three rings had poor compound developability and were associated with increased toxicity risks.32 In the selection of lead compounds, moderately complex structures are preferred because of their binding specificity33 and are associated with pharmacologic properties34 and biological activity35. Furthermore, topological polar surface area has been identified as one of the significant molecular descriptors in the regression equation and in the second principal component. This molecular property, defined as the total polar atom surfaces, has correlation with drug transport property, permeability, and absorption.36 Complexity and hydrogen bond acceptor count are directly related with topological polar surface area. Topological polar surface area and rotatable bond count influence molecular complexity and compound bioavailability.37

There are five classes of available antimycotics intended as treatment for fungal infections: allylamines, azoles, echinocandins, nucleoside analogs, and polyenes.38 In the present study, antimycotics were classified as either a systemic drug or a topical agent. The use of these antifungal drugs depends on the sensitivity profile of species, anatomical site it was found, and the type of infection.39 Echinocandins such as anidulafungin, caspofungin, and micafungin are considered as a new class of drugs exhibiting fungicidal effects.40 The mechanism of action of echinocandins prevents glucan synthesis41 which renders inability of fungal cell wall to withstand osmotic stress42. On the other hand, thiocarbamates and allylamines, such as naftifine and terbinafine are antifungals which rupture fungal cell membrane and promote accumulation of squalene which inhibits the synthesis of ergosterol.41 Terbinafine is the most potent systemic drug against dermatophytoses.6 In addition, allylamines also restrict sterol derivatives production.39 Another class of antimycotics are polyenes, which include amphotericin B, which are responsible in the leakage of intracellular constituents including magnesium, sugars, and potassium which disrupt the fungal membrane structure.43 In spite of its effectivity, amphotericin B has high toxicity restricting its use compared to azoles.

Finally, azoles are semi-synthetic and synthetic compounds with broad spectrum of activity and are classified either as triazoles (itraconazole, fluconazole, and voriconazole) or imidazoles (clotrimazole, econazole, ketoconazole, and miconazole).39,44 Triazoles are intended for systemic and superficial mycoses.45 Despite structural differences between triazoles and imidazoles, imidazoles have similar mechanism of action as triazoles.46 Imidazoles, except for ketoconazole, are used in treating superficial infections.44 In the present study, azoles intended as systemic drugs against dermatophytoses were classified to have higher comprehensive scores using hierarchical weighted principal component analysis when compared with azoles as topical agents. Azoles affect fungal cell growth and proliferation41, but there are limitations on the utility of these antifungal drugs because of hepatotoxicity and resistance47. In general, mucosal or superficial mycoses can usually be successfully treated by imidazole topical agents48 although triazoles have a broader application in the therapeutic management of both invasive and superficial mycoses49.

Computational approach was employed in classifying antimycotics and in establishing functional relationship between their inhibitory activity and molecular properties. Topological polar surface area, molecular weight, and rotatable bond count were identified as significant molecular descriptors of these antifungal drugs conferring their inhibitory action against dermatophytoses caused by Microsporum canis. Increase in the molecular weight and decrease in the rotatable bond count and topological polar surface area of the antimycotics will render better potency.

AVAILABILITY OF DATA
All datasets analyzed in the study are included in the manuscript and presented as tables.