In the recent past application of synthetic pesticides used to control mosquito-borne diseases like Zika, dengue, and filariasis. However, the vectors become resistant to chemical insecticide and few botanically-derived compounds. A plant producing compounds often show higher mortality against disease-carrying vectors. This study described that Caryota urens synthesizing silver nanoparticles shows the highest mortality against dengue causing vector Aedesa egypti vector. Synthesized nanoparticles were characterized by UV- Visible Spectroscopy, XRD and TEM. At a different concentration of nanoparticles from C. urens applied against various instars of A. aegypti. Ovi position deterrence of A. aegypti also described with a different concentration in that the highest concentration of C. urens shows increasing activity. Therefore, this study concluded that plant-producing nanoparticles are eco-friendly and safe for humans.

Mosquitoes act as a disease-causing vector it outbreaks the disease throughout the world. Mosquito is often observed everywhere because of improper maintenance of the drainage system specifically in rainy seasons, ponds, ditches and rice fields. This environment provides a favorable breeding place for mosquitoes (Komalamisra et al., 2005). Among the worldwide showed mosquitoes, more than a hundred species can transmit several diseases in humans and other vertebrates (Rueda, 2008). Mosquitoes can spread malaria, dengue fever, yellow fever, filariasis, Japanese encephalitis, and chikungunya to humans and creates allergy in humans. Gradually mosquito transforms dengue from one person to another in the way of biting infected persons (Das et al., 2003; Nour et al., 2009).

In lateral years, the application of chemical insecticides to control mosquito vectors and their program has been limited. Because of the demand for new insecticides, cost-effective synthetic insecticides, the sustainability of environment concern, public health and non-target peoples, their non-biodegradable environment, increased rate of biological expansion through organization and insecticide conflict on a global exfoliation (Ghosh et al., 2012).The man-made or synthetic insecticides has been dramatically increased condition to make control of various pest and disease in agricultural areas as well as disease carrying mosquito vector in urban area. In another side, the utilization of these synthetic insecticides has been represented the highest level of the resistance between the mosquitoes (Mahyoub et al., 2016).

This has necessitated the research demand and exploitation of eco-friendly, biodegradable and cheap cost endemic methods for mosquito control, which is employed with minimum handle by individuals and communities from a specific perspective (Kumar et al., 2012). There is provoking concern in research for bioactive compound against various pest from natural origins (Mickymaray S, Alturaiki, 2018; Mickymaray, 2019; Mickymaray and Al Aboody, 2019 Ganesan et al., 2020; Al Aboody and Mickymaray, 2020) as they do not develop any contrary consequences on the non-target organisms and are biodegradable persists a exceed research problem for research related with substitute mosquito control (Redwane et al., 2002).

In previous research eshasde scribed the potential of plant crude extracts, derived compounds and essential oils against larval stages of the mosquito. However, its diligence of botanical extracts in the field is even to be determined (Kannaiyan et al., 2012; Mickymaray et al., 2016). Nevertheless, biological reduction of heavy metals would be profitable for the emergence of impertinent, non-toxic, and eco-friendly nanoparticles; the synthesized silver nanoparticles are naturally hydrophilic, disseminate uniformly in water, stable, and had substantial larvicidal activity (Amer and Mehlhorn, 2006; Abdul Rahuman et al., 2008).

Nanoparticles comprises of more dimensions with the range of 100 nm or below have absorbed great maintenance because of their strange and captivating attributes (Kato 2011). Recent research focused that synthesized that nanoparticles have been highly explored for various properties like anti-cancer, anti-inflammatory, and antimicrobial activity (Johnston et al., 2010). Recently they are several increased number of plant-borne compounds have been researched for their efficiency and extracellular synthesis of nanoparticles, which exhibits the potential activity against mosqitocidal properties in atmospheric condition (Benelli, 2016).

Novel research in application nanoparticles makes great attention of researchers, which is involving the extensive utilization, and development of nanotechnology in various fields like electronics, material sciences, drug development, and disease diagnosis. The exploitation of green synthesis of aqueous crude plant extracts and microorganism are processing the synthesis of nanoparticles is developing in nanotechnology (Roopan et al., 2013). The application of crude plant extract, bacteria, and fungi for the biosynthesis of metal nanoparticles like silver, gold and oxide extends various profits like eco-friendly and characteristic for pharmaceutical and biomedical properties as they do not apply any toxic chemicals in the synthesis of nanoparticles (Aboody, 2019; Yang-Ke et al., 2019; Prabakar et al., 2013)

Many biological systems, such as that of fungi,algae,bacteria, and plants have been studied for the biosynthesis of silver nanoparticles (Balaji et al., 2009; Krishnaraj et al., 2010; Philip, 2010). These synthesized nanoparticles are reported to have several beneficial activities. The larvicidal activity of cobalt nanoparticles synthesized by Bacillus thuringiensis against Anopheles subpictus and Aedesaegypti (Diptera: Culicidae) was studied by Marimuthu et al., (2013).

Nevertheless, plant and plant-derived nanoparticle synthesis can be beneficial compared to other methods to control larvicidal activity. The reaction rate for the synthesis of nanoparticles is very high, eco-friendly and not harmful to Non-target organisms. (Naik et al., 2014).Economically the exhaust of the fresh inflorescence of C. urensis useful to prepare various fermented products (Namoff et al., 2011). It also renders potent fibre, woody stems for building fabrics and starch has been extracted from the coconut pith. In Asian countries, stem starch of C. urens plays a role as a major food source between tribal peoples (Ranasinghe et al., 2012). Therefore, the present work was carried out in search of new microbial and mosquito control agents. With the information gained from the previous reports, silver nanoparticles were synthesized from the plant species Caryota urens and antimicrobial activities AgNPs against soil pathogens and their larvicidal activity against mosquito larva were studied.

Sample collection
C. urens were freshly collected from in and around Tamil Nadu, India. The C. urens were cleaned; shade dried and makes fine powder by mixer or grinder. C. urens powder was allowed into soxhlet with methanol. Extracts from soxhlet were used for further experiments.

Insect Bioassay
C. urens synthesized nanoparticles were determined with dengue causing vector A. aegypti. A. aegypti at third in star were ordered into a container with various concentrations 4, 8, 12, 16 and 20 ppm of C. urens silver nanoparticle. For experiments,20 mosquito larvae per dose were employed and these experiments were replicated. Mortality was observed every 24 h. The percentage of mortality was detected by using the formula (1) and corrections for natural mortality when essential were done by using Abbott’s (1925) formula (Revathi et al., 2013).

The data from the mortality after correction were presented to probit analysis to calculate effective concentration (EC50). The data were analyzed with analysis of variance (ANOVA) by Minitab software (Chandrasekaran et al., 2014).

Ovi position deterrence index
From various concentrations of C. urens silver nanoparticles with rearing food in16 and 20 ppm containers to find out the concentration coveted for the experiments with A. aegypti. The female A. aegypti were afforded between treated and control containers. During the experiments, the sets of female larvae were continued separately for two days in cages measuring 25×25×30 cm. After the treatment period, the laid eggs were calculated, the ovi position deterrence index was determined as followed by the formula XRD
XRD pattern of C. urens synthesized silver bionanoparticles, observed hits from spectrum results range from 20° to 90°. XRD results observed that crystal-like silver structures have been compared with the standard chart, which is released by the Joint Committee on Powder Diffraction Standards. It observes differently concentrated rings furnished for the planes observed for crystalline particles (Fig. 4). 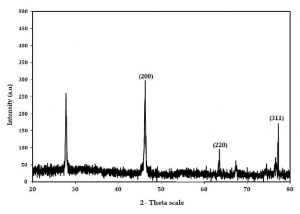 Bioassay
The bioassay results were observed through the mortality of mosquito larva and the effective percentage was observed (Fig. 5). This mortality rate of the experiments was observed that C. urens synthesized nanoparticle is increased level for mosquito control. The increased concentration of silver nanoparticles (F = 23.5; df = 5; P≤0.001) exhibited the mortality rate against A. aegypti. At 4 and 8 ppm, lower concentrations were also exhibited the deformed growth of larva and malformation of adult (Fig. 6). 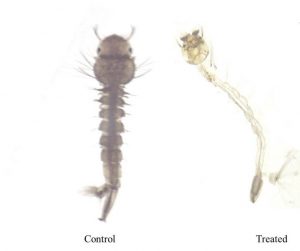 In recent decades, disease-carrying mosquitoes in nearly all developing countries have dispersed and conveyed about the infections which causing endangering life and debilitating diseases. Uninterrupted utilization of synthetic or man-made insecticides for disease-causing vector control amends the non-targetable biological arrangements. So diligence of substitute systems like biological control factors is the most necessary (Dhanasekaran and Thangaraj, 2013; Gomathi et al., 2019).

Several mode of action has been developed against insects and their control. Most of the insecticides have detoxification proeperty through certain mechanism in the insects fat body. This increased insect resistance problems in the insect control management has been viewed as the major problem to eradicate various insect vectors, because of this contrary effects of synthetic and chemical pesticides on environment and human health aimed to develop novel eco-friendly insecticides form living organism and insect growth regulators. (Mayoub et al., 2016).

In conclusion, biosynthesized silver nanoparticles using C. urens methanolic extracts harmless to non-toxic organisms and the non-toxic advance in formulating the larvicidal activity against A. aegypti. It is one of the costs efficacious methods may very applicable against mosquito control, the agricultural field, and biomedical applications.

ACKNOWLEDGMENTS
I gratefully acknowledge the Department of biology, College of Science, Majmaah University, Kingdom of Saudi Arabia for providing all the resources and platform to complete this research.

FUNDING
We are thankful to the Basic Science Research Unit, Deanship of Scientific Research, Majmaah University, The Kingdom of Saudi Arabia (Project Grant no: 1440-112) for research facilities and funding assistance.

ETHICS STATEMENT
This article does not contain any studies with human participants or animals.