It is the cry of the day to develop protocols for fabrication of noble metal NPs. Present study deals with the facile synthesis, and characteristics of sparfloxacin-mediated Ag-Sp/Au-Sp NPs (Scheme 1). The synthesized Ag-Sp/Au-Sp NPs were characterized using FTIR, UV-Vis, AFM and SEM. For the first time, the anti-bacterial activity of sparfloxacin-mediated Ag-Sp and Au-Sp NPs is reported. 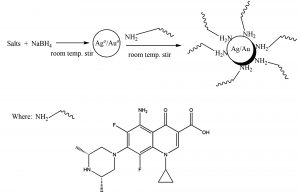 Scheme 1. Capping action of sparfloxacin with silver and gold NPs 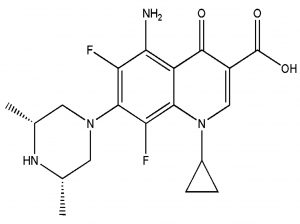 Synthesis of sparfloxacin-mediated silver and gold NPs (Ag-Sp and Au-Sp NPs)
The fresh stock solutions were prepared by using de-ionized water, (1 mM solutions of silver nitrate, tetrachloro auric acid, and sparfloxacin). Sparfloxacin drug (Fig. 1) is sparingly soluble in de-ionized water; hence methanol was used as co-solvent for preparation of drug solution. Ag-Sp and Au-Sp NPs were synthesized using NaBH4 as a mild chemical reductant. Reactions were carried out by mixing different volumes of sparfloxacin and metal salt solutions. The reaction mixtures were stirred robustly for 40 min at ambient temperature, followed by the drop wise addition of 0.2 mL of 50 mM NaBH4 solution. Gradual change in the solution color is a preliminary indication for the formation of Ag-Sp and Au-Sp NPs. After the addition of reducing agent, the light-yellow solution turned maroon, followed by brown and/or ruby red, depend on the molar ratio of the metal to the drug (Fig.s 2 a & b). Absorption maxima of noble metal nanoparticles were recorded as a function of retention time in the range of 300 to 700 nm. For Ag-Sp NPs, the best optimal metal: drug ratio observed was 10:1, while for Au-Sp NPs the optimized ratio was 1:2 (metal: drug), at room temperature (Fig.s 2 a & b). The residual salts and drug were removed via centrifugation at 10 rpm. The supernatant, containing Ag-Sp or Au-Sp NPs was lyophilized and furthermore, subjected for characterization and biological evaluation.

FTIR analysis
FTIR was performed to detect functional groups and reducing agent using FTIR spectrometer. FTIR spectra were logged with a Shimadzu IR-460 spectrophotometer. For these measurements, Ag-Sp and Au-Sp NPs were lyophilized and small amount of freeze-dried sample (0.01 g Ag-Sp and Au-Sp NPs) were mixed with KBr to prepare round pellets for FTIR measurement.

SEM analysis
The morphological analysis of the fabricated Ag-Sp and Au-Sp NPs was performed by SEM (JSM591, JOEL, Japan). The SEM image was recorded at 40,000× magnification operating at 20.00 keV. The presence of Ag and Au in Ag-Sp and Au-Sp NPs was confirmed using the energy dispersive X-ray spectroscopy (EDX, JEOL-JED, 2300). EDX represent the chemical nature of synthesized-NPs.

Anti-bacterial activities of Ag-Sp and Au-Sp NPs
The antibacterial activities were analyzed using well diffusion method with Mueller Hinton agar . Anti-bacterial efficacy of fabricated Ag-Sp and Au-Sp NPs were performed against bacterial strains of Bacillus subtilis (ATCC 6633), Staphylococcus aureus (ATCC 25925), and Klebsiella pneumonia (ATCC 700603) obtained from American Type Culture Collection (ATCC). The culture was developed in triplicates for 72 h at 37°C. The broth standards (0.6 mL) of the species were located in a sterilized Petri dish then 20 mL of the sterilized molten Mueller Hinton Broth (MHB) was employed. Streptomycin (2 mg/mL) was utilized as a standard. Inoculation was accomplished for 60 min to facilitate the diffusion of the antibacterial mediator into the medium. Incubation for 24 h at 37°C and the breadths of the zone of inhibition (ZOI) of bacterial development was calculated in the plate in millimeter (mm). After incubation at 37°C for 24 h, the diameter and growth inhibition zones were screened, averaged and the mean values were presented (Abdel-Aziz et al., 2014). The activities were repeated in triplicate.

Statistical analysis
The results collected for microbial activity are displayed as the mean ± standard error of the mean (SEM). The achieved data were assessed to one way analysis of variance (ANOVA). The analysis was done by using Graphpad Prism 5. The confirmation of surface morphology and the size of Ag-Sp and Au-Sp NPs was also performed by SEM. SEM images indicated spherical Ag-Sp NPs (40-50 nm) with uniform distribution (Fig. 3c). SEM results for Au-Sp NPs were comparable, that further confirming the AFM analyses. The shapes were found to be slightly spherical in the range of 70 to 80 nm as presented in Fig. 3d. EDX illustrated (Fig. 4 a & b) the chemical nature of Ag-Sp and Au-Sp NPs showing signals at an energy of 3 KeV for silver, and 2.12 and 9.71 KeV for gold (Nisar et al., 2015). 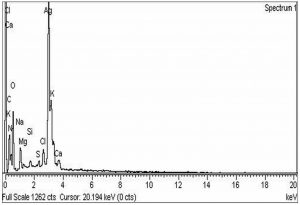 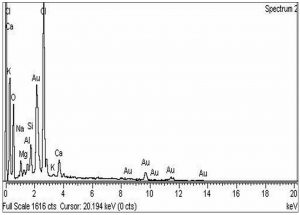 Fig. 5. FTIR spectra of sparfloxacin and its silver and gold NPs

Temperature is an important factor that affects the stability and properties of Ag-Sp NPs and Au-Sp NPs. Ag-Sp NPs were stable at broad range of temperatures (Nisar et al., 2016) (Fig. 6e). Surface plasmon resonance (SPR) bands up to 100°C indicated a decrease in intensity with a blue shift from the original band that is due to NPs degradation with decrease in particle size. Au-Sp NPs exhibited also less stability by increasing the temperature to 100°C. Temperature also affect the color of Au-Sp NPs, wherein the color changes from pink-purple to colorless, indicating the aggregation of Au-Sp NPs with the increase in temperature (Khan et al., 2019) (Fig. 6f). Anti-bacterial properties
Ag-Sp and Au-Sp NPs anti-bacterial activities were screened against bacterial strains including Staphylococcus aureus, Bacillus subtilis, and Klebsiella pneumonia, by agar well diffusion method (Table 1). The inhibition zones indicated that Ag-Sp NPs and Au-Sp NPs are active antibacterial agents against a range of bacteria. At a concentration of 3 mg/mL, Ag-Sp NPs and Au-Sp NPs revealed significant anti-bacterial activity against tested stains, showing a ZOI ranging from 20±0.98 to 24±0.94 mm (Ag-Sp NPs), and 22±0.79 to 26±0.92 mm (Au-Sp NPs). The results were comparable with sparfloxacin (30±0.92-32±0.94 mm) and the standard streptomycin (28±0.75-30±0.98 mm).

Staphylococcus aureus is a Gram-positive bacterium that develops resistant against antibiotics such as tetracycline, penicillin, semisynthetic penicillin, and aminoglycosides. The reason for this resistance could be the overuse of antibiotic (Reddy et al. 2012; Mittal et al., 2016). Bacillus subtilis is a Gram-positive bacterium, found in the gastrointestinal tract of humans and ruminants and as well as in the soils. There is limited information on their resistance to antibiotics. Many Bacillus subtilis were sensitive to vancomycin (4 mg/L), tetracycline (8 mg/L), and gentamicin (4 mg/L), but resistant to streptomycin. The sensitivity to chloramphenicol, clindamycin, and kanamycin was a species specific (Adimpong et al., 2012). Klebsiella pneumoniae is considered the most encountered carbapenemase-producing Enterobacteriaceae (Won et al., 2011). Increasing the antimicrobial drug resistance, including carbapenem-resistant K. pneumoniae (CRKP), depend on the substantial increases in illness (Won et al., 2011). Few antimicrobial therapies are exist for CRKP infections (Sanchez et al., 2013).

A rapid, facile and time effective protocol, to formulate noble metal (Ag/Au) NPs stabilized with sparfloxacin, was introduced. Synthesized-NPs had sizes in the range of 40-45 nm (Ag) and 70-80 nm (Au), respectively. The results showed the potential to produce stable noble metal (Ag/Au) NPs stabilized with sparfloxacin confirmed by different methods such as FTIR, UV-vis spectroscopy, AFM and SEM. Stabilities of Ag-Sp NPs and Au-Sp NPs were tested under different conditions including temperature, salt solution, pH, and time. The results revealed that both Ag-Sp NPs and Au-Sp NPs are sable. EDX analysis confirmed the inorganic structure of the biosynthesized Ag-Sp NPs and Au-Sp NPs. The synthesized Ag-Sp NPs and Au-Sp NPs are freely water soluble. Analysis showed that amine and carboxylate moiety might be a cause of NPs capping. Moreover, Ag-Sp and Au-Sp NPs exhibited good antibacterial potential against Gram-negative and Gram-positive bacteria.

ACKNOWLEDGMENTS
Shujaat Ali Khan is grateful to the Higher Education Commission of Pakistan for financial support.

FUNDING
Authors are grateful to the Higher Education Commission of Pakistan for financial support under the indigenous PhD program.