Urinary tract infection (UTI) is the second most common infection worldwide and Escherichia coli (E. coli) is the chief causing pathogen. Antimicrobial resistance results into therapeutic failure. This study aimed to incrimination of E. coli as uropathogen harbouring cnf1 gene (necrotoxin virulence)and to detect the in vitro antimicrobial efficacy of several selected essential oil/antibiotic combinations against the isolated uropathogenic E. coli. Well diffusion method was used to determine the minimal inhibitory concentrations (MICs) to essential oils (EOs) individually. Broth micro-dilution method was used to determine the minimal inhibitory concentrations (MICs) to antibiotics and in combinations, to figure out the interactive efficacy of tested combinations. Necrotoxin cnf1 gene was detected by PCR assay. E.coli was detected at a rate of 40.6% of the isolated urinary pathogens and 47.8% showed ESBL production. In-vitro synergistic efficacy was only observed for cinnamon oil/gentamycin combination in 100% of selected 15 tested isolates (P-value <0.001). The cnf1 virulence gene was detected in 40% of tested isolates showing no significant correlation the conferred pattern of resistance among the E. coli isolates. Cinnamon/gentamycin combination against drug-resistant E-coli is promising and can pave the way for further clinical trials to formulate pharmacological combinations.

Urinary tract infection (UTI) is one of the most common causes of febrile diseases in children. In low-income countries, UTIs are ranked as the third most common bacterial infections in children1,2. E.coli is the chief uropathogen, accounting for 80% of UTIs3. The emergence of resistance among bacteria has worsened the therapeutic clinical outcome of bacterial infections4. Antimicrobial resistance in E. coli can be mediated by the production of extended-spectrum beta-lactamases (ESBLs) that confer resistance to all β-lactam antibiotics leading to the emergence of multidrug-resistance (MDR)5,6. Recently, essential oils (EOs) have been proven to serve as antimicrobials7. The synergistic effect of oil/antibiotic combinations exceeds the sum of the individual effects of the oil and antibiotic8. However, further studies are needed to elucidate mechanisms by which oils modulate bacterial drug resistance8.

Necrotoxigenic E. coli (NTEC) produces cnf1 toxin, which is considered highly lethal among bacterial toxins and is implicated in cystitis and pyelonephritis with remarkable rates10.

The present study aimed to test the antimicrobial effects of different types of EOs and investigate the in vitro efficacy of selected oil/antibiotic combinations against E. coli uropathogen. Furthermore, we aimed to detect the cnf1 virulence gene by a PCR assay.

Collection of urine samples
The present study included 400 urine samples collected from children suspected of having UTIs at tertiary-care paediatric hospital in the period from March 2017 to September 2017.The study conformed to the ethical guidelines of the 2013 ‘Helsinki Declaration’ and was approved by the research committee of the paediatric hospital at Cairo University.

Detection Minimal inhibitory concentration (MIC)for Essential oils (EOs) and antibiotics
Oils of cinnamon (Cinnamom umverum), thyme (Thymus vulgaris), clove (Syzygium aromaticum), peppermint (Mentha piperita), lavender (Lavandula angustifolia), anise (Pimpinella anisum), rosemary (Rosmarinus officinalis L.), lemongrass (Cymbopogon citratus), cumin (Cuminum cyminum) and castor bean (Ricinus communis) were obtained from the National Research Center (Cairo, Egypt). Each oil was tested individually against E. coli by the well diffusion method15 and the one with the widest inhibitory zone was selected to be tested in combination with each of 3 antibiotics (gentamycin, meropenem and cefotaxime) (Oxoid, UK). The individual MICs of EO and antibiotics against E. coli isolates were detected by the broth micro-dilution method in Mueller Hinton broth (Oxoid, UK) (with Tween 20 at a final concentration of 0.5%) into a 96-well micro-plate (2017)11,16,17. The MIC was defined as the minimal concentration of tested agent that inhibited bacterial growth16,17.

Testing the efficacy of oil/antibiotic combinations
The efficacy of the selected three oil/antibiotic combinations was tested against 3 groups of E. coli isolates (ESBL E. coli, AMPC E. coli and non-ESBL-non-AmpC E. coli). The antimicrobial effect of the combinations was detected by the broth micro-dilution method in Mueller-Hinton broth (with Tween 20 at a final concentration of 0.5%). Ten-fold dilutions of antibiotics and EO were prepared in a 96-well micro-plate9. The MIC values of each antibiotic and EO alone and in combination were determined, and the fractional inhibitory concentration index (FICI) was calculated according to the following equations:

The bacteriolytic effect of individual antibiotics compared to oil/antibiotic combinations was detected by measuring the optical density (O.D.) at 600 nm.

Detection of the necrotoxin gene (cnf1) by multiplex PCR
As this study aimed at detection of (cnf1) gene and its correlation to antibiotic resistance pattern, considering the previously published study by Duzgun et al., 2019, who found that (cnf1) gene which is chromosomally encoded as the most common necrotoxin gene associated with antibiotic resistant E. coli in urinary tract infection18, we chose the necrotoxin gene (cnf1) to be investigated in 100 E. coli isolates by PCR assay. Bacterial DNA was extracted by the boiling method, and PCR was carried out using a set of oligonucleotide primers for cnf1 gene19.

This study included 400 urine samples from patients clinically suspected of having UTIs, The E. coli was the chief isolate and accounted for 40.6% of the positive culture (Fig.1). ESBL and AmpC resistance patterns were found in E. coli with rates of 47.8% and 20.8%, respectively. Table (1):
Inhibitory zone diameters (in mm) of tested oils against the selected 3 groups of E-coli isolates.

Table (3):
Bacteriolytic effect of oil/antibiotic combination compared to the individual effect of the antibiotic alone. 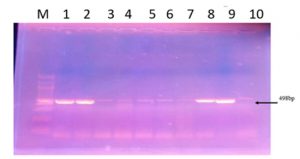 UTIs are common infections in clinical practice. Approximately 150 million people are diagnosed with UTIs each year20. In the present study, 71.7% (287/400) of the urine samples were culture positive. This result was consistent with a study that reported positive cultures in 74.8% of urine samples; however was not complying with another study that reported a lower rate of 32.5%21,22. Variations in infection rates can be attributed to epidemiological variation among different geographical areas, as well as sex variation in the study population23. In the present study, E. coli accounted for 40.6% of the isolated uropathogens, which was consistent with many studies that reported E. coli as the chief uropathogen in UTIs20,21,24.

In the present study, ESBL production was demonstrated in 47.8% of the E. coli isolates, which was consistent with that of another study(41.9%). ESBL production was reported at higher rates of 63.6% and 66.78% by other studies, which could be due to the criteria used to select the study populations, who had complicated UTIs25,26.According to the Infectious Diseases Society of America, ESBL-producing E. coli are among the six drug-resistant microbes for which new therapies need to be developed27.

Many studies have been published on the antimicrobial properties of plant extracts against different microbes28-30 especially cinnamon oil, as a safe antimicrobial alternative. Cinnamon oil at least partially gets metabolized into cinnamic acid in stomach and small intestine and almost completely gets metabolized into cinnamic acid in liver before it is absorbed into blood31. As reported by several studies, cinnamon oil has a powerful antimicrobial effect due to deformation of the microbial cytoplasmic membrane28-30. In the present study, cinnamon oil showed the strongest antibacterial effect,with a significant difference (P-value <0.001) among the three E. coli groups (ESBL E. coli, AmpC E. coli and non-ESBL-AmpC E. coli), which agreed with several previous reports 22,28,32,33, however opposed by a study that showed no synergy34. The present study had the advantage of testing oil/antibiotic combinations against drug-resistant E- coli isolates from patients, as most of published reports tested ATCC drug- susceptible strains15.

The cnf1 virulence gene was detected in 40% of isolates. Several studies reported variable prevalence rates of 61%, 22.9% and 37%, that could be attributed to different study population35-37,39. Previous studies showed that the NTEC isolates had variable degrees of resistance towards antimicrobial agents19. Moreover, it was assumed that E- coli serotypes involved in cnf1 production differ from those of ESBL production19,38.

ACKNOWLEDGMENTS
We would like to thank Abu ElRich AlMonira 3ry care pediatric hospital laboratory staff (faculty of medicine, Cairo university)for providing assistance on methods through out this research.

AVAILABILITY OF DATA
All datasets generated or analyzed during this study are included in the Supplementary Files.