The present investigation was conducted to find out the fungal diversity on leaf litter samples collected from Ratangarh forest, Datia. The samples were collected from Jan 2017-June 2017 at monthly intervals. Serial dilution method and PDA media was used for the isolation of fungi. During present investigation, 14 species belonging to 6 different fungal genera have been isolated and identified. Out of these, 2 species belongs to class Zygomycota and 12 species belongs  to class Ascomycota and their anamorphs. Species namely Mucor hiemalis, Rhizopus stolonifer, Aspergillus niger, Aspergillus japonicus and Torula sp. were early colonizers while Aspergillus nidulans, Aspergillus flavus, Aspergillus fumigatus, Emericella nidulans, Ascochyta sp., Penicillium chrysogenum, Penicillium aurantiogriseum, Trichoderma reesei, and Trichoderma viride were found as late colonizers over leaf litter of Acacia catechu. In all stages of decomposition, fungi belonging to the Ascomycota were predominant. The present investigation provides valuable information about diversity of leaf litter fungi of tropical forest.

Forest produces a large amount of organic matter in the form of litter which provides unique habitats for fungi. Leaf litter fungi are the major degraders of plant litter which is composed of basically cellulose and lignin and play a major role in carbon and nitrogen cycling in the forest ecosystem1. Decomposition of plant litter is a physical and chemical process which is involved in reducing litter to its elemental chemical constituents and as such a major determinant of nutrient cycles2. Fungi are the major component of soil microbiota in the forest ecosystems which utilize the organic substrates present in leaf litter as energy and nutrient source by the process of decomposition. In their role as decomposers, leaf litter fungi also sequester carbon and move it to the recalcitrant carbon stores of the soil3.

In addition to their vital role in ecosystem services, fungi are of great interest for biotechnological application in food, wine and textiles industries⁴, ⁵, for energy generation⁶, for plastics degradation⁷, and to produce highly-added value compounds such as biosensors, cosmetic products and organic acids⁸,⁹.

The replacement of fungal species on a particular substratum over time has been termed as ‘succession’ and has been the focus of numerous studies10-15. Studies on litter fungi of tropical ecosystems are limited as compared to temperate ecosystems16-18. In recent years numerous studies on litter fungi have been carried out specially on plant species e. g. Manglietia garrettii19, Ficus pleurocarpa20, Magnolia liliifera21, Pandanus sp.22, Ficus sp.23, Hevea brasiliensis24, Anacardium occidentale and Pavetta indica25,26.

The genus Acacia belongs to family Mimosaceae comprising about 2800 species, 37 in Madhya Pradesh, mostly found in scrub and dry deciduous forests of Balaghat, Bhopal, Chindwada, East Nimar, Gwalior, Hoshangabad, Indore, Jabalpur, Mandala, Panna, Raisen, Sagar, Satna, Shivpuri, Sidhi and Datia. Acacia catechu (L.f.) Willd., locally known as ‘khair’, (Fig. 2b) is a medium sized deciduous tree up to 15 m high with hooked spine. Branchlets armed with pseudo-stipular spines in pairs below the petioles. It occurs in edaphic climax types of dry deciduous as in Anogeissus forest. ‘Khair’ is chiefly used as a source of kattha and kutch. Kattha is extracted from its heart wood and used in pan. It is also used as a timber, fuel, fodder, gum, medicine, furniture material and household articles by the local people. There have been only a few recorded studies on the fungal succession on leaf litter in India. The present study has been aimed to isolate and identify litter decomposing fungi and their ecology in the forest of Datia district at different time intervals during leaf litter decomposition of Acacia catechu. 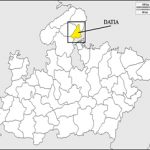 Fig. (1a). Map of India and Madhya Pradesh (1b) Study site Box denotes the site.

Litters of Acacia catechu family have been collected randomly from research field from January 2017 to June 2017 at monthly intervals. Collected leaves were brought to laboratory in sealed polythene bags within 4 hrs of collection for further study. Isolation of fungi
The isolation of litter fungi was carried out by using serial dilution method28. 10 g of decaying leaves were transferred into 250 ml Erlenmeyer flask containing 100 ml distilled water and shaken thoroughly for 15 min on a horizontal mechanical shaker for spore suspension. The suspension was further diluted 103 and 104 times. One ml of this suspension was inoculated separately into each of five Petri plates containing 15 ml potato dextrose agar nutrient medium i.e. PDA (Potato 200g, Dextrose 20g, agar 15g, pH 5.5, Distilled water 1000 ml) supplemented with streptomycin to avoid bacterial contamination in culture plates. The plates were subsequently incubated at 28 ± 2°C. Fig. 4. (a & b). Shows heterogeneous or mixed fungal colonies. Development of fungal colonies was noticed from third day of incubation. The heterogeneous or mixed fungal colonies appeared after 5 days of incubation. Desired colonies were transferred to freshly poured Petri plates containing PDA media in order to obtain pure and mono culture. The pure cultures were then preserved on PDA slants and maintained at 4ºC for further studies.

Identification of fungi
The majority of sporulating isolates were identified on the basis of their cultural, morphological and spores characteristics with the help of standard texts and keys29-31. Preparation of microscopic slide of the isolated fungi, to aid identification, was done using the pure culture. For the preparation of semi permanent slides of fungal fruiting bodies a portion of mycelium of the representative colony was picked up with the help of a pair of needles and mounted on a clean slide with solution of cotton blue in lactophenol. The slide was examined under Trinocular microscope (Olympus) with 10x & 45x objectives and 10x & 15x eye pieces and the microphotographs of the individual fungal species were taken.

Six fungal genera and fourteen species have been isolated and identified from leaf litter of Acacia catechu over a period of six month of decomposition (Table-1) following serial dilution method. Out of these, two species belongs to the class Zygomycota and twelve species belongs to class Ascomycota and their anamophs. On the basis of their occurrence on leaf litters, fungal species were divided into early and late settlers. Fungal species namely Mucor hiemalis, Rhizopus stolonifer, Torula sp. and Aspergillus nidulans were initially highly frequent on available substrate and regarded as early colonizers. The appearance of Aspergillus flavus, Aspergillus fumigatus, Emericella nidulans, Ascochyta sp. Penicillium chrysogenum, Trichoderma reesei, Trichoderma viride and Penicillium aurantiogriseum increased in 2-6 months and decreased thereafter as the decomposition progressed and thus were termed as late colonizers. The fungi Aspergillus niger and Aspergillus japonicus dominated the overall litter assemblages throughout the 180 days of decomposition.

Table (1):
Fungi identified associated with the litter of Acacia catechu in the forests of Datia district in order to appearance.

These results presented indicate that the total number of species recovered from the decomposed leaf litter of Acacia catechu increased initially and started to fall later. M. hiemalis, R. stolonifer, Torula sp. and A. nidulans were dominated during the early stage of decomposition and Ascochyta, Trichoderma and Penicillium sp. were dominant during the later period of decomposition. Emericella nidulans which is teleomorphs of A. nidulans have been isolated from the decaying litter. The fungi have been isolated in its sexual cycle only. In all stages of decomposition, fungi belonging to the Ascomycota were predominant. During the entire decomposition process, species richness ranged from 4 to 12 species with the highest value found at 90 days of decomposition. After 120 days of decomposition, the numbers of fungal species decreased and were replaced by new colonizers. Findings in present work are similar to that of32-34,19,35,36,20,37,25,24,38. Occurrence of fungi during succession study on senescent leaves of Mangletia garretti for 56 days recorded 22 fungal taxa with the fungal community composition differing at each stage of succession. Greater fungal communities were recorded from the mature stage of decomposition19. A similar trend was observed in the studies of succession of the woody litter of Magnolia liliifera for 35 months at bimonthly samplings, where the number of fungal species was higher during the mature stage of decomposition21. On the other hand, species diversity tends to be richest and the number of fungi usually highest during the early and middle stages of colonization24. Most of the fungi isolated from degrading biomass are the members of Ascomycetes whereas very few fungi belongs to other groups like Zygomycetes39-40, reported similar observations when they isolated mycoflora of Chenopodium leaf litter.

The results of present investigation shows that the tropical leaf litter is colonized by numerous fungi and the type of fungal species changes as decomposition progress. M. hiemalis, R. stolonifer, A. niger, A. japonicus, Torula sp. and A. nidulans appear first on available substrates and they give way to other colonizers with greater ability to degrade the leaf litter. The appearance of A. flavus, A. fumigatus, E. nidulans, Ascochyta sp., P. chrysogenum, T. reesei, T. viride and P. aurantiogriseum were increased with the progress of degradation. The dominance of A. niger and A. japonicus in all stages of decomposition indicates the higher survivability of these species in tropical deciduous forests of district Datia.

In the decomposition process, the initial colonizers are main utilizers of simple organic compounds (sugars) whereas the later once are capable of exploiting complex organic molecules such as cellulose and lignin41. Initial colonizers or pioneers gradually disappear and another inhabitant replaced earlier ones. This is possible because of the availability of different kinds of nutrients in different levels of decomposition. The species of Aspergillus, Penicillium and Trichoderma are capable of using cellulose as a source of carbon for their growth and multiplication. The physiochemical environment, litter quality and the composition of the decomposer community are the three main factors controlling litter decomposition42-44.

Rhizopus stolonifer Ehrenberg
(K) Initially colonies were white then become blackish with spreading stolons, internodes brown, rhizoids branched at internode, unbranched. Sporangiophores were in group of 3-10 which become dark brown at maturity. Sporangia appears black, Spores were irregular round and oval, angular in shape and grey in color31.

Torula sp. Peersoon ex Fries
(C) Colonies small, discrete, olive brown or dark brown or sometimes black in color. Mycelium superficial unbranched or sometime branched but irregularly. Conidia blastic dry, in simple or branched chains which arise from surface of the conidiogenous cells. Cells are cylindrical or spherical may break into with phragmoconidia.

Trichoderma viride Pers.
(O) Colonies appears hairy due to formation of aerial mycelium, glaucous to dark bluish green; conidiophores may be formed on the aerial or creeping hyphae, main conidiophores producing smaller side branches, ultimately a conifer-like branching system is formed, conidia globose or short obovoid, or broadly ellipsoidal, sometimes with distinct apiculus- like base because of distinct minute roughening on their walls, bluish green to dark green31.

The present investigation provides valuable information about the leaf litter fungal diversity of tropical forest. The fungal communities of the tropical forest were entirely dominated with Ascomycota and co-dominated with Zygomycota. The data presented here indicates that Aspergillus niger, Aspergillus japonicus, Aspergillus flavus, Emericella nidulans, Ascochyta sp., Trichoderma spp. and Penicillium sp. may contribute or be useful in future work in the area of nutrient recycling and may also act as fungal bio-indicators of decomposition in the particular forest area of Datia district.

ACKNOWLEDGMENTS
The authors are thankful to Principal and Head of the Department of Botany and Industrial Microbiology Jhansi (U.P.) and the authorities of Government PG College, Datia (MP) for providing necessary facilities throughout the course of this investigation.