Sterilization can be conducted using chemical or physical methods such as dry heat, steam with pressure, hydrogen peroxide, and chemical solutions. Disinfectants are chemicals applied to non-living objects and able to kill or eliminate pathogenic microbes with the exception of bacterial spores. Inanimate objects used in health care are mostly disinfected by wet pasteurization or liquid chemicals 1.

Instrument classification
To determine the amount of chemical agent and the type of disinfection method required for surgical and other medical instruments that are reusable, the instruments are classified in three types: critical, semi-critical, and noncritical. Critical instruments are those that are used on sterile tissue, including blood vessels, implants, endoscopic biopsy forceps, laparoscopes, and arthroscopes. Semi-critical instruments are in contact with mucous membranes or non-healthy skin, but are not used on sterile tissues. Cystoscopes, gastrointestinal endoscopes, gronchoscopes, anesthesia, vaginal probes, and respiratory therapy equipment are examples of this type of instruments. Noncritical tools are those in contact only with intact skin, such as blood pressure cuffs, tourniquets, linens, general use equipment, furnishings, and environmental surfaces2.

The efficacy of any sterilization and disinfection method depends on the following three basic aspects. First, to achieve an effective destruction of living organisms. Second, the sterilizing processes and tools must be validated and suitable in design and procedure to accomplish a good combination of temperature and sterilant agent to be effective on microorganisms. Devices undergoing a disinfection process must be cleaned to reduce bio burden to further confirm the effectiveness of the disinfection process. Third, there must be enough contact between the sterilant and all surfaces and cracks of the device to be sterilized3. There are many methods used to sterilize and disinfect instruments such as steam, heat, chemicals, and others chemical methods using compounds with antiseptic or antimicrobial properties.

Chlorhexidine gluconate (CHG)
Chlorhexidine gluconate is active against gram-negative and gram-positive bacteria including aerobes and anaerobes, yeasts, and fungi. CHG is a synthetic antimicrobial drug widely used as a broad-spectrum antiseptic in clinical and veterinary medicine4. The mechanism of action is through the interaction of the positive charge on the CHG molecule with negatively charged phosphate groups on the microbial cell wall resulting in a change in the osmotic equilibrium of the cell. The increase in the cell wall permeability allows the CHG molecule to penetrate the microbe and facilitate the release of cytoplasmic material5,6. Sterilization and disinfection are necessary to prevent the dissemination of infectious pathogens to patients and staff. The current study is an attempt to obtain a better sterilizing method.

Povidone-iodine
Povidone-iodine is produced by the binding of free iodine to the solubilizing agent polyvinyl-pyrrolidone (PVP). This process is conducted to decrease the degree of toxicity of iodine as it exerts its antimicrobial effect when released from the PVP molecule7. Once released, iodine is toxic to microbes because it irreversibly associates with residues of tyrosine in the protein structure, interacts through the formation of hydrogen bonds with several amino acids and nucleic acids, oxidizes sulfhydryl groups, and reacts with lipid unsaturation8. Povidone-iodine is a broad-spectrum antimicrobial solution effective against a variety of pathogens including Staphylococcus aureus9. In addition to its antibacterial activity, it is also effective against fungi, viruses, protozoa, and some bacterial spores10. PVP-iodine has rapid in vitro activity (it is bactericidal within 15–20 s) and the duration of the effect on the skin has been reported to be 12–14 h due to a phenomenon called back-diffusion11,12. Compared with antibiotics, there is little chance for bacteria to develop resistance to PVP-iodine because of the multiple cellular targets13.

Alcohols
Alcohols are colorless solutions having one or more of functionally active hydroxyl groups14. Alcohols are classified as bacteriostatics or bactericidals against vegetative bacteria; they also act as a fungicidals, tuberculocidals, and virucidals but they do not destroy bacterial spores15. Methyl alcohol (methanol) has the weakest bactericidal action among all alcohols and thus, it is seldom used in healthcare16. Ethanol exhibits rapid broad-spectrum antimicrobial activity, and as a dehydrating agent causes cell membrane damage, rapid denaturalization of proteins concomitantly interfering with metabolism, and cell lysis17. Ethyl alcohol is used to disinfect surgical instruments, facemasks, thermometers, and for skin antisepsis before injections13. A major advantage of alcohol aqueous solutions is that they do not leave any residue on treated items18.

Aim of the study
This study was aimed at introducing new combinations of different concentrations of povidone-iodine, CHG, ethanol, and methanol to achieve sterilization of surgical tools and equipment.

The novelty of this research is the use of four different concentrations of each agent in addition to the combination of two or more agents. This approach allows the determination of the best combination that provides the greatest protection against infective microorganisms especially considering the high amount of new resistant microorganisms. The best combination may be used in the sterilization of instruments and tools in surgery and other medical devices that are in direct contact with patients, such as thermometers, laparoscopes, and other tools.

Preparation of sterilizing/disinfecting agents
The sterilants/disinfectants used in the current study are standard solutions of povidone iodine (10%), CHG (5%), ethanol (100%), and methanol (100%). The chemicals were used to prepare various concentrations of fresh solutions diluting them with distilled water19 (Table 1).

Sterilization and contamination of surgical tools
All the surgical tools included in this study were pre-sterilized in an autoclave at 121°C for 30 minutes and under 15 pounds of pressure for standardization. Spore-forming Bacillus thuringiensis bacterial isolates were obtained from the College of Agriculture, Kufa University and were characterized to the species level using morphological and biochemical tests20,21. The isolate was confirmed as B. thuringiensis through the amplification of the 16S rRNA gene with PCR22. To obtain a homogenous spore suspension, a tube containing 5 mL of saline was inoculated with a 1 mL of a spore suspension and then incubated for three days at 55°C. Further, pre-sterilized surgical tools were contaminated with B. thuringiensis for 5 minutes, subjected to the sterilant solution for 5 minutes, and then washed with saline. The suspension was vortexed and 0.1 mL of the washing solution was seeded onto 8 cm-diameter Petri dishes containing nutrient agar (Himedia, City, India). Petri dishes were incubated for 24 hours at 37°C and the number of well-isolated colonies counted. The control group consisted of contaminated surgical tools subjected to the same procedure without using any sterilizing solutions.

The best sterilizing concentrations of single agents were combined as indicated in Table 2, and a second round of procedures were conducted as described above but using the mixtures.

For confirmation purposes, the combination of disinfectants was used to sterilize vegetative growth of pathogenic bacteria that were obtained from the Microbiology laboratory of the College of Dentistry, Kufa University. Bacteria used were the following: P. aeruginosa, K. pneumoniae, S. aureus, and E. faecalis. All bacteria were cultured and a suspension of the bacterial growth was prepared on nutrient broth (Himedia, City, India). The same above procedures described for endospores have been repeated with vegetative bacteria.

Any invasive medical procedure requires surgical tools or equipment and therefore, infection may arise without effective sterilization. The use of standard sterilizing solutions may be ineffective because of bacterial resistance and the presence of bacterial endospores poses and additional challenge. Sterilization aims at achieving complete destruction or elimination of all type of microbes and it can be performed through autoclaving or incineration; however, for medical instruments that need to be reused the two procedures may not be effective23.

This study included the testing of various concentrations of different disinfectant solutions and a combination of them with the goal of killing bacterial endospores to achieve sterilization of surgical tools and equipment. The reason why B. thuringiensis endospores were used in this study is that it is a non-pathogenic spore-forming bacterium that is heat resistant and easy to germinate and form colonies24. 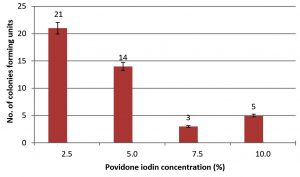 The best povidone-iodine effect was obtained with the 7.5% concentration yielding only 3 CFU, this may be explained considering that iodine makes direct contact with living cells and iodinate the lipids components of the plasma membrane25. Higher chemical concentrations show lower activity probably because of their lower oxidation ability due to competition for the site of attachment and penetration within the walls of the endospore. Lower concentrations such as 5% and 2.5% resulted in lower antibacterial activity because of the low concentration of the active compound. The growth of Bacillus subtilis endospores was inhibited with a one-minute exposure to 0.5 – 1 % of iodine in a 70% ethanol solution26. The higher CHG efficacy corresponded to the 5% concentration and the effect might be due to positively charged CHG salts binding to negatively charged compounds on the bacterial cell wall making it more prone to leaking and for the cell to burst, and because of the blockage of the potassium channel27. Other concentrations produce a lower effect because of the low availability of CHG. 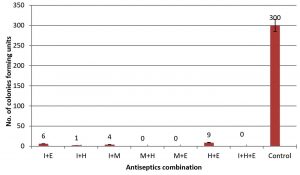 Antibacterial effect of methanol
Methanol is rarely used as a sterilizing solution; but in this study, we used it as a single agent to compare it with others chemicals tested and to study the effect of the combination of methanol with other reagents. A 90% concentration treatment yielded 20 CFU, whereas 80%, 70%, and 100% concentrations resulted in 27, 42, and 40 CFU, respectively.

Methanol was less effective in killing bacterial spores compared to other solutions. The best concentration to inhibit bacterial growth was 90% and this is probably because this concentration prevents endospore germination without killing it. A similar behavior was reported for methanol-treated fungal spores31. Methanol has also been used as a solvent for the inactivation of Bacillus pumilus spores on heat sensitive devices32. Furthermore, ice-cold methanol was used in the precipitation of polyhydroxybutyrate from endospore-forming Bacillus megaterium demonstrating its ability to destroy endospores33.

* Prepared by mixing equal volume of each agent of certain concentration example iodine 7.5% with Chlorhexidine 5%.

There was no vegetative growth of P. aeruginosa, K. pneumoniae, S. aureus and E. faecalis for the above combination of disinfectants.

Several of the combinations tested were effective preventing germination of bacterial endospores. The combination of CHG with ethyl alcohol and cetyl lactate produces a very high topical antimicrobial effect with and immediate, persistent, and residual bactericidal activity; this also relates to the low temperature used in the manufacturing process for the production of CHG salts in alcohol-based formulations34. The results of our study did not agree with the results of CHAKRABORTY et al. were endospores of B. subtilis were not inhibited with a 70% aqueous ethanol solution after the exposure of spores for 24 hours at 4°C, 25°C, and 37°C26.

ACKNOWLEDGMENTS
All the diagnosis of bacterial isolates supported by the microbiology lab, faculty of dentistry, Kufa University.