Members of Enterobacteriaceae family are responsible for both community and hospital acquired infections. Because of development of antimicrobial resistance carbapenem has remained as last resort of drug for treatment of infections caused by these bacteria.Mechanism for development of this resistance in carbapenem resistant Enterobacteriaceae (CRE) may due to production of carbapenemases, efflux mechanism or loss of outer membrane porins.The most common carbapenemase enzymes are Class A – KPC, Class B – NDM, VIM and IMP and Class D oxacillinase(OXA-48 like enzymes).In India, most prevalent carbapenemase encoding gene is NDM-1but there is rising threat of OXA-48 prevalence. Unlike the phenotypic methods, the genotypic methods are useful to discriminate the type of carbapenemase enzyme, specifically for OXA-48 like enzymes. Total 170 CRE isolates were subjected for multiplex PCR study for their molecular characterization. Of the 170 CRE isolates,68.2 % (n=116) were positive for NDM-1 gene while 44.1 % (n= 75) of the isolates showed presence of OXA-48 gene. VIM (2.3%), KPC (1.7 %) were responsible for carbapenemase production while none of the isolates showed presence of IMP gene. NDM-1 and OXA-48 coexisted in 21.2 % (n=36) of the total isolates. OXA-48 causes weak hydrolysis of carbapenem because of which it is under reported with routine diagnostic methods. Early detection of OXA-48 and other carbapenemase encoding genes, helps for contact precautions and effective therapy which prevents further escalation and horizontal spread of CRE.

Most of microbiome of human intestine consists of Enterobacteriaceae family. The members from this family are responsible for both community and hospital acquired infections which includes wound infections, pneumonia, septicemia, meningitis, peritonitis, pylonephritis, cystitis and various catheter related infections1,2.Because of development of antimicrobial resistance carbapenem has remained as last resort of drug for treatment of infections caused by these bacteria3. But recently a major threat has emerged out as a  result of carbapenem resistance leading to therapeutic failure. This has lead to serious healthcare concern especially in association with nosocomial outbreaks. Carbapenem resistance may occur due to production of carbapenemases, efflux mechanism or loss of outer membrane porins4,5.

In India, most prevalent carbapenemase encoding gene is NDM-1 which is been proved in many studies8. But of late the OXA-48 is seen to be closely following the NDM-1 prevalence, though it is more prevalent in Turkey, Morocco, Tunisia, Russia, Germany and other countries compared to India5,9.

Study population
A total 170 carbapenem resistant Enterobacteriaceae isolates obtained from clinical specimens received for culture and sensitivity in the department of microbiology from June 2016 to May 2018 were included in the study.

Bacteriology Workup
Standard methodology was used for processing of samples12. All the clinical specimens received during the period were cultured on blood agar,chocholate agar, and MacConkey agar12. The growth in the culture media was identified by the Vitek. ®2 system (BioMerieux, France). Antimicrobial susceptibility testing was done by Vitek®2 system (BioMerieux, France)13. 170 isolates of Enterobacteriaceae were confirmed resistant to any one or all carbapenems tested in the gram negative antimicrobial panel and defined as carbapenem resistant Enterobacteriaceae isolates14.

Polymerase Chain Reaction
Detection of carbapenemase encoded genes blaNDM-1, blaKPC, blaOXA-48, blaVIM, and blaIMPwas done with subset of primers. Primers used in the study were as shown in Table 1.

Table (1):
Primers used for carbapenemase encoded genes in the study.

PCR reactions were processed in a Master Cycler Gradient (Eppendorf, India) in 20 µl mixtures containing 2 U Taq polymerase(GeNei, India), 1 X assay buffer consisting of 10 mMTris-HCL(pH 9.0 at 2.5°C),1.5 mM MgCl2, 50 mM KCL and 0.01 % gelatin, each dNTP at a concentration of 200 µM and 10 pmoles of each oligonucleotides primers per reaction.

The amplification product of multiplex PCR were analyzed by electrophoresis in 2.0% agarose gel at 100 V for 1 h in 1X Tris acetate EDTA (TAE) buffer stained with 0.01 mg/ml ethidium bromide. For molecular weight marker 1 Kb DNA ladder was loaded in a gel along with the samples to confirm specific size of the corresponding gene. For staining of the gel ethidium bromide (10mg/ml) was used and UV transilluminator was used for visualization and results were photographed in gel documentation system (Bio- Rad Laboratories).

The analysis of derived nucleotide sequences for identification of sequence similarity was performed using the NCBI/BLAST network service of National Centre for Biotechnology Information System (NCBI) website (www.ncbi.nlm.nih.gov/BLAST). The obtained DNA sequences from isolates were aligned with representative of the sequences for identification of sequence similarity from gene bank database (NCBI blast search) with the help of nucleotide alignment program. The DNA sequence of both OXA-48 and VIM genes were sent for publication in National Centre for Biotechnology Information (NCBI) database and were assigned with GenBank accession number MK183750.2 and MK183751.2 respectively24, 25.

Statistical Analysis
Data were filled in the MS Excel Software. Analyzed results were expressed as percentage and p values by Chi square test using GraphPad Instat Software. If the probability is less than 0.05, the association or difference is said to be significant. 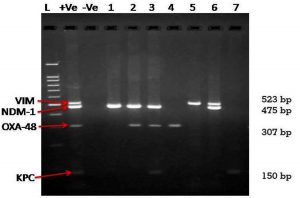 Molecular methods are gold standard method for detection of carbapenemase production3. Also it discriminates different types of carbapenemase production unlike phenotypic methods which fails to discriminate the types of carbapenemase3,27. Of the 170 CRE isolates 158 isolates were encoded by at least one carbapenemase producing gene. According to Centre for Disease Control (CDC) definition,remaining 12 isolates were CRE14 but negative for blaNDM-1, blaOXA -48, blaKPC, blaVIM, blaIMP14. These 12 isolates might be having other mechanism for carbapenem resistance like target site mutation, OMP alteration and efflux pumps28. Chromosomal mediated genes like blaIMI, blaSME, blaNMC are also having carbapenem resistant activity29. In the present project, plasmid mediated genes were focused and because of low prevalence of other mechanisms, they were not studied. Multiplex PCR study is one of the reference method for simultaneous detection of genes encoded for carbapenemases of different classes21.NDM-1 has been predominant carbapenemase in Indian CRE isolates8. In a SENTRY Antimicrobial Surveillance Program, 2006-2007 Castanheira M. et al. retrospectively found a prevalence rate of 38.5 % of NDM-1 among Enterobacteriaceae isolates collected from multiple Indian cities30. In one of the pioneer study from India, Kumarasami K. found it as 31.2 % and 55.3 % in isolates from Chennai and Haryana respectively31. A higher prevalence of 91.6 % was found by Deshpande P. et al. in clinical isolates from a tertiary care hospital in Mumbai but the study included only 24 isolates32. In a study from Mumbai Kazi M. et al. have found prevalence of 75.2% in 2012.33In blood stream Enterobacteriaceae isolates Mohanti et al. found 65.6 % of the CRE isolates conferred with NDM-1 gene34. Almost similar but slightly higher that is 68.2 % of the CRE isolates in present study were encoded with blaNDM-1 gene.

In life threatening or invasive infections carbapenems are most used antimicrobials because of their bactericidal effect which is concentration independent36,37. Also because of their broad spectrum activity which includes action against Gram-positive, Gram-negative bacteria including anaerobes, their use is widespread28. The widespread use, selection pressure of antimicrobial surviving resistant strains, horizontal plasmid spread among Enterobacteriaceae isolates might be contributing factors for raised prevalence of NDM-1 and OXA-48 in the present study. Also being tertiary care centre many patients referred have already received antibiotics, β –lactams being preferred one.

In the present study NDM-1 and OXA-48 coexisted in 21.2 % (36/170)of the isolates Simultaneous presence of blaOXA-48 and blaNDM-1 among E. coli in the study by Khajuria A et al. was found to be (25/300) 8.3%35. Certainly there have been increasing reports of outbreaks and case reports seen across the globe42. This rapid spread of OXA-48 like gene is mediated by plasmid mediated transfer of genetic elements which is seen quite common among Enterobacteriaceae family43. OXA-48 like enzymes causes weak hydrolysis of carbapenems. As a result minimum inhibitory concentration of carbapenems remains on lower side44. Also routine phenotypic methods fails to detect presence of OXA-48 like enzymes. Therefore molecular detection of OXA-48 like genes is a must at present time. Early detection of the OXA-48 and other genes helps for active management and prevents further horizontal spread7.

None of the isolates showed presence of bla IMP in the study. Similar findings were observed by Mohanti et al.34 and Solankhi et al.20 among Indian studies. IMP type MBL gene is endemic in Japan and Taiwan though rest of world does show some sporadic cases45. Similarly VIM is more prevalent in Greece but outbreaks and single reports are from all over world46.

blaNDM-1 carrying clinical isolates is characterized by presence of other resistance factors.29 Total 42 (24.2%) of the isolates positive for NDM-1 were carrying at least one other carbapenemase encoded gene. Mohanti et al. found multiple gene in 39.4 % of the isolates34. Such co-occurrence of multiple carbapenemase gene was detected in 5.9%, 10% and 13% from studies in Sultanate of Oman41,China40and Turkey39 respectively. Higher percentage of multiple gene co-occurrence in NDM-1 strains specifically in combination with OXA- 48 in the present study is a cause of concern.

Though NDM-1 is leading carbapenemase encoded gene in carbapenem resistant Enterobacteriaceae isolates, the spread of OXA-48 is also quite noticeable. As there is no well defined phenotypic method available for detection of OXA-48-like producer emphasis should be on its molecular detection. This will help in contact precautions and to prevent further escalation of carbepenem resistance. Further considering a raised prevalence of coexistence of OXA-48 and NDM-1 gene,a study on role of NDM-1in transfer of plasmid mediated transfer of OXA-48 is warranted.

ACKNOWLEDGMENTS
We thank all the staff at the department of Microbiology, KIMS and at Department of Molecular Biology and Genetics, KIMSDU, Karad for their support.

ETHICS STATEMENT
Informal consent was taken before the study from each patient. Study approval was issued and maintained by the Institutional Ethical Committee of KIMSDU, Karad before starting the research project.

AVAILABILITY OF DATA
All datasets generated or analyzed in relation to aims and objective of above research project are included in the manuscript.