Colistin is considered the last option for treatment of infections caused by Multidrug Resistant (MDR) Gram negative pathogens. The mcr-1 gene could transfer the resistance to colistin between different species. Therefore, screening of this resistance mechanism will help greatly in the control of further spread of colistin resistance and enhancing the outcomes of patients. The current work aimed to study  the frequency of colistin resistance among MDR Gram negative pathogens isolated from clinical samples at Ain Shams University Hospitals and to explore if the mcr-1 gene was the responsible mechanism for this resistance. These pathogens were isolated from various samples including; blood, pleural fluid, sputum, urine, swabs from surgical and burn wounds, that were submitted from wards and intensive care units to the central microbiology laboratory at Ain Shams University Hospital, Cairo, Egypt, during the period from June to December 2019. Culture and bacterial identification were done by conventional microbiologic techniques. Eighty Gram negative bacterial pathogens were assayed for antimicrobial susceptibility by disc diffusion test. Sixty MDR Gram negative isolates were identified and further studied for colistin susceptibility by E- test, as well as real- time PCR to detect mcr-1 gene. Totally four isolates (6.7%) were phenotypically resistant to colistin. We found mcr-1 gene in three of the obtained isolates (5%); 1 Pseudomonas aeruginosa ( 5.3%) and 2 Acinetobacter baumannii (14.3%). In conclusion, although we detected a low prevalence of mcr-1 positive isolates from human clinical samples, continuous monitoring and implementation of infection control precautions are greatly required, to interfere with the further occurrence and transfer of bacterial species carrying the mcr-1 gene.

The emergence of multidrug-resistance among Enterobacteriaceae, Acinetobacter baumannii (A. baumannii ) as well as Pseudomonas aeruginosa (P. aeruginosa) is considered a critical issue in different healthcare settings. Infections that are caused by such antimicrobial resistant pathogens usually result in much higher morbidity and mortality rates1. Treatment options are limited because MDR Gram negative bacteria are resistant to most classes of antimicrobials2. The high incidence of these microorganisms and the shortage of suitable newly developed antimicrobials are the leading causes for the re-introduction of polymyxins, a previously known class of cyclic polypeptide antimicrobials, again as a helpful therapeutic option3 .

Clinicians used colistin, which is known as polymyxin E, in the time period between 1950s and 1980s. However, they stopped using it because of its noticed toxic effects on the kidneys and nervous system. This antibiotic was limited for treatment of chest infections in patients with cystic fibrosis and decontamination of intensive care patients’ guts4. Colistin acts mainly by binding to lipid A within the cell wall of Gram negative bacteria, displacing calcium and magnesium ions, resulting in lysis of the bacterial cell wall and death. Other suggested mechanisms include possible endotoxin effect and inhibition of respiratory enzymes located in the bacterial membrane5.

Polymyxin resistance has been attributed to chromosomal mutations. Until late 2015, when a plasmid-mediated polymyxin resistance gene named mcr-1 was first reported in China. The frequency of positive isolates for this gene from human patients’ samples was 1%, while higher rates were found in raw meat samples and animals of 15% and 21% respectively6. Several countries reported an increasing detection rate of isolates harbouring mcr-1 gene7. A transferase enzyme is encoded by this gene adds a phosphoethanolamine molecule to lipid A, thus decreasing the negative charge of the target and hence reducing its affinity for ploymyxins8. Moreover, the mcr-1 gene has been observed on plasmids containing other antimicrobial resistance genes9.

The prevalence of colistin resistant bacterial isolates varies among different countries and changes over the eras. Conducting surveillance programs for mcr-1 gene detection and applying proper infection control precautions are the two main pillars to minimize the spread of isolates positive for this gene. Thus the current work aimed to study the frequency of colistin resistance among MDR Gram negative pathogens isolated from various clinical samples at the central microbiology laboratory of Ain Shams University Hospital and to explore if mcr-1 gene was the responsible mechanism for this resistance.

Identification and antibiotic susceptibility of the isolated organisms
Identification of the isolated bacterial species was done based on colony morphology, microscopic examination of Gram stained films and conventional biochemical reactions of the isolates in accordance with Wilson et al.10 Eighty Gram negative pathogens were randomly selected and assayed for their susceptibility to different antimicrobial classes, by disc diffusion test, following the CLSI guidelines11. The following antibiotics (Oxoid, England) were included: amoxicillin/clavulanic acid, ampicillin/ sulbactam, piperacillin /tazobactam, cefepime, cefotaxime, ceftazidime, imipenem, meropenem, tobramycin, amikacin, sulfamethoxazole / trimethoprim, doxycycline, ciprofloxacin, and levofloxacin. Nitrofurantoin was used only in urine samples. MDR organism was defined as the isolate was non-susceptible to at least one drug in three or more classes of antimicrobial12.

Determination of colistin minimal inhibitory concentration by E- test
Minimal inhibitory concentration (MIC) of colistin was determined for the different MDR bacterial species, by the E-test method (Himedia laboratories, India) according to the manufacturer’s recommendations. The breakpoints used here were: ≤2 mg/l considered as sensitive to colistin, while ≥4 mg/l considered as resistant 11. Escherichia coli (E. coli) ATCC 25922 and P. aeruginosa ATCC27853 served as a quality control for the antimicrobial susceptibility testing.

Detection of mcr-1 gene by Real time PCR
DNA Extraction from the studied MDR bacterial isolates was performed by QIAamp DNA Mini Kit (Qiagen, Germany) following the manufacturer’s instructions. Purified DNA was preserved at -20°C until used. Amplification and detection of mcr-1 were performed using SYBR Green quantitative PCR (qPCR) assay by Rotor Gene Q5 plex (Qiagen, Germany). The used primers were CLR5-F 5’ CGGTCAGTCCGTTTGTTC- 3’; CLR5-R 5’-CTTGGTCGGTCTGTAGGG-3’, according to previous report 6. The final volume of PCR reaction was 25 μl; composed of 12.5 μl QuantiTec SYBR Green qPCR Master Mix (2X), 5 μl template DNA, 0.7 μl for each primer, 6 μl RNase- free water. Positive and negative controls were also included. The real-time thermal cycler was programmed as: initial denaturating step for 15 min at 95°C, then 45 cycles of denaturation at 95°C for 15 sec, annealing at 55°C for 30 sec and extension at 72°C for 30 sec. This program was followed immediately by a melting program consisting of 1 minute at 95°C, 30 sec at 55°C, lastly to 95°C for 30 sec. 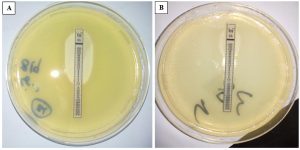 Colistin is usually used as the last option of antimicrobials in treatment of multiresistant infections13. Transfer of plasmid -mediated colistin-resistance between different Gram negative pathogens requires frequent surveillance to limit the spread of this global threat 14.

As previously reported by Somily et al.15, most of the MDR isolates in this study were obtained from ICU patients (76.67%). This can be explained by several factors that predispose ICU patients to bacterial infections such as the use of invasive devices, severity of diseases, prolonged duration of hospitalization, comorbidities, and the higher use of broad-spectrum or multiple antibiotics.

In this study phenotypic colistin susceptibility was carried out by E- test. Several studies found the high agreement between E-test and dilution methods, which have made it a reliable alternative to these tests16. All Enterobacteriaceae isolates obtained in this study were sensitive to colistin, while 12.12% (4/33) of the non-fermenters were resistant to colistin; representing 6.7% of the studied MDR isolates. One previously reported study in India found a total of 24 colistin resistant isolates (8.5%) among 281 Enterobacteriaceae and non-fermenters isolates17. In Kuwait, a study reported that 12% of studied Acinetobacter  isolates were colistin- resistant18. Several studies conducted in other Egyptian hospitals also reported low rates of colistin resistance ranging from 0 to 5% among A. baumannii19-21. Kandeel et al.16, found 8% and 3% rates of colistin resistance among MDR P. aeruginosa and A. baumannii, respectively, in Saudi Arabia. Khedr et al.22 found that 4.5% of Enterobacteriaceae and 7.9% of non-fermenters isolated from patients’ samples in the pediatric oncology department at the national cancer institute, Egypt, were resistant to colistin. Other investigators reported higher rates of colistin resistance. Shawky et al.23 detected 13.8% of 65 carbapenem resistant K. pneumoniae were colistin resistant. Another report studied MDR and extensively- drug resistant Gram negative bacteria isolated from Tanta University Hospital, and found 10 isolates among 61 Gram- negative bacilli (16.4%) were resistant to colistin. Among these colistin resistant isolates, 8 were K. pneumoniae and only 1 E. coli isolate and 1 P. aeruginosa24. The difference in the rates of resistance to colistin reported in the above studies is mostly attributed to differences in the studied populations and variability in the infection control measures applied. Also the low level of colistin resistace observed in our study may be due to the limited use of this antibiotic in our hospital.

Regarding the results of the real time PCR, 3 of the studied isolates (5%) were positive for mcr-1 expression; including 1 P. aeruginosa (1/19; 5.3%) and 2 A. baumannii (2/14; 14.3%). This report confirms previously reported findings that alarmed the spread of this gene. El nahriry et al.26 firstly reported mcr-1 gene in single E. coli isolate out of 241 Gram-negative clinical bacterial isolates, from Egypt. Zaki et al.25 revealed this gene in 2 bacterial strains (4%); “1 E. coli and 1 K. pneumoniae” out of 50 colistin resistant Enterobacteriaceae spp., that were recovered from health-care associated infections in Mansoura. However, Osama et al.27 detected one E. coli isolate (3.3%) harbouring mcr-1 gene, while Emara et al.24 didn’t detect mcr-1 gene among any of the phenotypically colistin resistant K. pneumoniae isolates.

The four colistin resistant isolates recovered in this study exhibited a high level of resistance against tested antimicrobials; as 75% were resistant to piperacillin/ tazobactam, fluoroquinolones, cephalosporins, carbapenem, and aminoglycosides. These findings also agrees with Zaki et al.25, who reported marked resistance to the third generation cephalosporin (60%), fourth generation cephalosporin (78%), and carbapenem antibiotics (50%). Another study found resistance to ciprofloxacin, piperacillin/tazobactam and nitrofurantoin was 90% for each one, 30% to carbapenems, and 20% to aminoglycosides24. This variability in resistance pattern can be explained by difference in antibiotics policy applied in health care settings within different geographical regions.

Worldwide the prevalence of mcr-1 in animal isolates is much higher compared with human clinical isolates, which may be related to the misuse of colistin in agriculture and the animal production28. Genes for colistin resistance are excreted in the feces of animals, and infection can be transmitted to humans when animal feces are used as manure, or contaminate the water bodies29.

In this study, we found one phenotypically colistin resistant P. aeruginosa isolate (MIC=4μg/ml). This could be explained by either the presence of chromosomal-mediated resistance, or the presence of other mcr gene variants. About 13 mcr-1 subgroups were already described in several countries, differing from mcr-1 by only one nucleotide. In addition other nine mcr variants have been described30.

Ongoing transfer of mcr-1 may lead to higher rates of poor treatment outcomes and consequently greater morbidity and mortality rates31. Thus surveillance for colistin resistance mediated by this gene should be conducted and studies should involve greater collection of isolates.

Although we detected a low prevalence of mcr-1 positive isolates from human clinical samples, continuous monitoring and implementation of infection control precautions are greatly required, to interfere with the further occurrence and transfer of bacterial species carrying mcr-1 gene.

AUTHORS’ CONTRIBUTION
All authors listed have contributed to the work, and approved it for publication.