In this study, SPIONs were produced in the presence of cobalt as catalyst. SPIONs formed by this chemical co-precipitation were size around 20 nm. After producing the SPIONs, it was subjected for functionalization with oleic acid and loaded with drug – itraconazole (a drug possess antifungal and antibacterial activity) and encapsulated with polyhydroxybutyrate (PHB). The produced core-shell SPIONS was used for antimicrobial study against two bacteria namely – Pseudomonas aeruginosa and Brevibacillus brevis and a fungi – Candida albicans. It was found to be effectively releasing drug for more than 3 hours. The SPIONs alone was acting good as contrasting agent and used for enhancing X-ray imaging.

In this modern era metal based nanoparticles are being exploited in different fields including environmental remediation, processing of leather etc.1-7 Present days, metal based nanoparticles are used in biomedical applications for diagnosis and therapy. As a part of therapeutics, these particles used for targeted drug delivery could reduce the concentration of drug required and also enhance the potency of drug. Some metals are known to have side effects, but can be ruled out when proper nanoparticle is chosen as drug carrier, one such is SPIONs (superparamagnetic iron oxide nanoparticles), which is known for its biocompatibility, even it can modified to aid the tagging of any drug/ ligand / molecule/ protein and helps in targeted delivery to desired site8-11. These SPIONs can be moved or brought to target location by controlled external magnetic movement. SPIONs do have superparamagnetic property which do have various properties including high saturation field, extra anisotropy contributions or shifted loops after field cooling12. Sometimes these SPIONs’ properties influence them to not to have magnetic property, this can be overruled by using proper functionalizing agent, these functionalization helps in adding desired molecules too. Reports are there for using these SPIONs in targeted drug delivery in vivo as well as invitro11-14. Moreover, these kind of SPIONs have been used to deliver antibiotics against bacteria8,10. Functionalization also gives stability to it11,15. Having understood the application and properties of SPIONs, this work to has been done to produce these SPIONs having Cobalt as one of catalyzing agent (to study it’s influence in SPIONs formation), after production it was functionalized with oleic acid, followed with itraconazole coating and studied for its in vitro antibacterial activity. The produced naked SPIONs was utilized as contrasting agent for X-ray imaging.

Chemical used
All chemicals were bought from Qualigens, India and all are of analytical grade. Pure microbial fermentation product Poly hydroxy butyrate (PHB) was obtained from Sigma Chemicals, India.

Synthesis of SPIONs and drug encapsulated SPIONs
The synthesis of superparamagnetic iron oxide nanoparticles was carried out by mixing 100 mL of 1 M FeCl3.6H2O, 1 M FeSO4.7H2O and 1M Cobalt chloride hexahydrate (CoCl2.6H2O) to equal volumes of 5M Sodium hydroxide solution. The reducing condition for the precipitation method was maintained by heating the  precursor solution to 60°C for 15 min while drop wise adding the CoCl2-NaOH mixture. Further the contents turned black upon steady exposure while drop wise addition with concentrated ammonia. The precipitates were subsequently washed several times in distilled water to remove excess ammonia and then subjected to lyophilization. 50 mg of the synthesized SPIONs were functionalized by treating it with 25mL oleic acid in ethanol for 6-7 h kept in a shaker at room temperature. Particle were made into nanostructure by subjecting to sonication for 45 min and lyophilized. As mentioned in our earlier studies the drug itraconazole was conjugated to the nano particles and finally encapsulated with polyhydroxybutyrate (PHB)8.

Characterization of SPIONs
The formation of core-shell was carefully monitored and thoroughly characterized by scanning electron microscopy at every stage.

Drug release studies
The drug release kinetics of SPIONs were done immediately after the encapsulation with PHB by sonication process and lyophilized. The drug release was observed watchfully and scrutinized by dialysis methods as detailed in previous reports8,16-18 followed with measuring its absorbance at 267nm19.

In-vitro antimicrobial activity
The inherent ability of the nanostructures to interact with micro molecules was studied by letting the synthesized SPIONS to intermingle with microorganisms taken in an agar plate. The study was extended to both the bacterial and fungal species namely Pseudomonas aeruginosa, Brevibacillus brevis and Candida albicans2,8.

X-ray imaging
The differential interaction of SPIONs in electromagnetic radiations were observed by exposing them in X ray which could be developed as material for contrast imaging was carried out by injecting the particle to the yolk of the chicken egg as mentioned in our earlier studies8,19.

Characterization
The observation of the superparamagnetic iron oxide nanoparticles under Scanning electron microscope at disclosed the change in the size of the nanomaterial as it was processed to core-shell formation. The initial size of the nanoparticle as 20nm was subsequently increased to 250nm after being functionalized with oleic acid, coated with the drug Itraconazole and encapsulated with poly hydroxy butyrate(Fig. 1a – d). Evidence for the change in size of the particle was reported in earlier researches also8. Drug release studies
The release profile of the drug Itraconazole by the superparamagnetic iron oxide nanoparticles coated with PHB was observed upto 3h (Fig. 2). Extended release profile was likely observed for the PHB based nanoparticle as reported by Senthilkumar et al.18. The surface characteristic of the nanomaterial conferring a steady release of the drug molecule encourage the results as to consider the molecule a suitable candidate for sustained release or extended release. 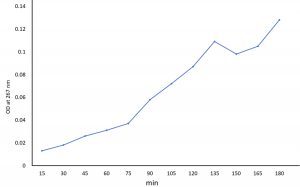 In-vitro antimicrobial activity
The interaction of the drug loaded superparamagnetic iron oxide nanoparticles on microbial species had pronounced results on both the bacterial and fungal species (Table 1). The almond gum used as a coating agent for the itraconazole loaded nanoparticles too had an effective antibacterial and antifungal response8. Extensive studies on these types of nanomolecules with sustained release contours could institute a valuable strategy for treating epidemic outbreaks.

X ray imaging
SPIONs had differential interaction when observed under X rays. The ability of the molecule to offer a better contrast to the unstained background and illustrating the clear boundary of the yolk as evidenced in(Fig. 3b) than the control (Fig. 3a) could recommend the use of superparamagnetic iron oxide nanoparticles as better contrasting agent in the imaging protocol. The results coincided with the similar imaging reports of Justin et al20 and Sruthi et al.8.

Fig. 3. X ray imaging of SPIONs a) without SPIONs b) with SPIONs. The black arrow denotes the egg yolk (which is clearly seen in SPIONs loaded eggs)

The superparamagnetic iron oxide nanoparticles (SPIONs) synthesized by co-precipitation method in presence of cobalt was found to be around 20 nm in size. These molecules upon funtionalization, drug loading and encapsulation were increased in size to 250 nm. The SPIONs was noticed to have a constant, extended drug release profile following first order kinetics and releasing drug steadily and successful in combating the microbial growth. Further this molecule also proffered as a contrasting agent under X rays. It is amazing that these molecules can be proposed to target microbes admonishing a suitable choice for sustained drug candidate. These materials in nanoscale could offer promising results to combat bacteria and fungi. Further their proficient imaging profile as a contrasting agent could suggest an effective approach to track the microbial colonization and targeted drug delivery.

AUTHORS’ CONTRIBUTION
The ideology and research were supported by all the authors. All the authors involved in manuscript writing.