Vitamin D deficiency is an unrecognized health problem worldwide. This investigation was carried out to assess the level of vitamin D and to figure out the reasons of vitamin D insufficiency in children living in Jeddah city, Kingdom of Saudi Arabia. This investigation was carried out in Pediatric and Maternity Hospital Almosadia in Jeddah, Saudi Arabia from October till December, 2015. One hundred healthy children were involved in this study, aged 5 to 15 year-old. Serum calcium and 25-hydroxyvitamin D levels were estimated. Supplemental vitamin D consumption and sun-exposure time were determined. Respondents age was between 1 to 15 year-old. The males were 45(45%) and females were 55 (55%). 98 % of them were Saudis, 1% were Yemeni and 1% were Palestinian. The average exposure to sun light was 7.12±4.39 minutes/day. The mean of daily vitamin D intake was 163.8±55.44 units/day and 26% of children were taking more than 200 IU/day. The average of vitamin D serum level was 15.01±4.5 ng/ml and only 16% of subjects had serum concentration of vitamin D >20 ng/ml (P=0.036). The calcium serum mean level was 7.24±2.04 mg/dl (P=.001). Eminent prevalence of vitamin D insufficiency was observed among very healthful children residing in a sunny Jeddah city. Proper exposure to sunlight and vitamin D supplements can prevent vitamin D deficiency.

Vitamin D is an important hormone which is necessary for calcium absorption from gastrointestinal system. Low levels of vitamin D is associated with bones diseases.1Several studies stated that vitamin D deficiency could be a causative for many diseases; for example, diabetes mellitus, heart diseases, cancer, neuromuscular problems and multiple sclerosis.2

Vitamin D deficiency affects around 50% around the world and it can affect all ages or ethnic groups. The important  reason of vitamin D deficiency is reduced sunlight exposure which is required to produce vitamin D by ultraviolet-B in the skin. Black people can absorb high amount of ultraviolet-B more than white people, so they need more exposure to the sun to produce enough amount of vitamin D.3 People with fat malabsorption and bariatric patients are barely consume fat-soluble vitamin D, and also people suffering from kidney related problem lose 25-hydroxy vitamin D, attached to the vitamin D binding protein through urine excretion. Moreover; some drugs can cause vitamin D deficiency including anticonvulsants and medication for treatment of HIV.3 In 2011, Institute of medicine committee,4 in an agreement with Pediatric Endocrine Society,5 stated that the normal serum level of 25-hydroxy vitamin D is at least 50 nmol/L in children.

Vitamin D is synthesized from skin exposure to the sun light.3 Moreover, there are some sources of vitamin D in our dietary nutrition including egg yolk, fatty fish, dairy products and beef liver.4

The American Academy of Pediatrics recommends that the dose of all infant and adult eligible for the age of fifty years is 200IU/day and adult from 51-71 years needs 400-600IU/day.5 In November, 2008 the AAP doubled the approved dose of vitamin D for infant from 200IU – 400IU/day.1

In 2010, there was a cross-sectional study conducted on 510 children aged 4-15 year-old  in pediatric clinic at Jeddah Clinic Hospital-Kandrah, KSA.

The objective of our investigation was to measure the levels of vitamin D in children living in Jeddah city near to Holy place Makkah. Moreover; to study most important vitamin D sources. The result was that seventy children had normal vitamin D levels (13.72%), three hundred (58.82%) had a deficiency and 140 (27.45%) had very low level of vitamin D. There was a relation between vitamin D deficiency and bone aches. In addition, Sun exposure and dietary intake had an impact on vitamin D measure in examined children.1

Purpose of this investigation is to measure the prevalence of vitamin D insufficiency in children residing in Jeddah, Kingdom of Saudi Arabia and to figure out the main reasons of its deficiency.

This investigation was carried out in Pediatric and Maternity Hospital Al Mosadia in Jeddah, Kingdom of Saudi Arabia from the month of October 2015 till December 2015. An authorized permission was approved by the department of research at the hospital and consent was approved by parents of the children. One hundred healthy children were involved in this study, aged 5 to 15 year-old. Serum calcium, alkaline phosphate, phosphorus and 25-hydroxyvitamin D levels were measured. Many parameters like supplemental vitamin D absorption, sun light exposure period & the % (percentage) of the body surface area (BSA) exposed to the sun light were determined. A questionnaire was filled by parents that including daily meals frequency, type of food and daily exposure of child to the sun (minutes per day).  The body surface area that is exposed to the sun light was determined by asking about the clothes worn at daytime. Neck and face 3%, hands surface 2.5%, arms and forearms 4%, feet  and calves (2.5% &6%) were determined. The body surface area was measured using  Mosteller formula:1BSA (m²) = {[height (cm) ×weight (kg)]/3600}½. The calculated % of the body surface area exposed multiplied by the result of a well known standard formula, the BSA was converted to cm2 from m2.

Levels of vitamin D <20 ng/mL and <7ng/mL were supposed to be related and serious insufficiency.1

A cross-sectional study was conducted on one hundred healthy children attended to the Pediatric and Maternity Hospital Al Mosadia in Jeddah, Saudi Arabia from October till December, 2015. Their ages were between 1 to 15 year-old. The number of males were 45(45%) while number of females were 55(55%). Nearly about 98% of them were Saudis, 1% were Yemeni and 1% were Palestinian. The demographic data of the results represented in (Fig. 1). When parents were asked about sources of healthy vitamin D enriched diet, We found that 53% of parents did not know the sources of vitamin D (Fig. 2). For their children to their body mass average was 27.8 ±13.31kg, average height was 50.5±23.27cm. The average of exposure to sun light was 7.12±4.39 minutes/day, (Table 1). The mean of daily vitamin D intake was 163.8±55.44 units/day and 26% of children were taking more than 200 IU/day, (Table 2). The daily average of milk cups that children were taking was 1.5 ±1.10 cups/day, and the mean of monthly intake of fish meals was 4.9±2.32 fish meal/month. The average of vitamin D serum level was 15.01±4.5 ng/ml and only 16% of subjects had serum concentration of vitamin D >20 ng/ml. The calcium serum mean level was 7.24±2.04 mg/dl. 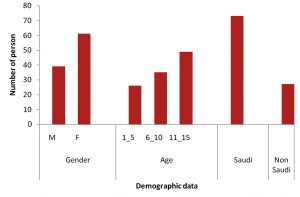 Table (1):
Correlation between Exposure to sun and Concentration of vitamin D. 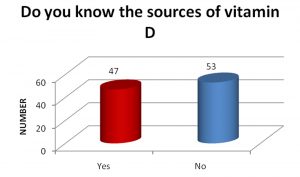 It is an inquiry point in this investigation that the unanticipated broad number of healthful children has vitamin D insufficiency (86%) despite Jeddah which is a sunny city. Many studies worldwide reporting increase in vitamin D deficiency in children together with those in equatorial regions. The prevalence of vitamin D insufficiency has been recorded to range from 15 to 80%.1 Children in school-aged and adolescent have the major percentage of vitamin D deficiency, reflecting life-style changes.1

Low level of vitamin D in infant is liable to the poor food intake and deficient exposure to sun light. Majority food items lack  vitamin D source except fish oil, eggs and a few species of fish and marine food. Hence, it is not liable that children in Jeddah will get adequate vitamin D from food sources alone.1

In this study, the average vitamin D level was 15.01± 4.5 ng/ml which is higher than previous study that was conducted in Jeddah,1 2010. Vitamin D insufficiency is described as a level <20 ng/ml as recommended by the thirteenth Workshop Consensus for Vitamin D Nutritional Guidelines held in British Columbia, Canada (April 2007).

There was a direct relation between vitamin D levels and time of sun exposure, body surface area exposed to sun rays and day to day intake of vitamin D (Table 1). However, one more investigation reveals that serum vitamin D level was not relevant to the evaluated vitamin D intake. An average time of sun light exposure was 7.12 min/day which indicate absence of sun light is an important factor of vitamin D deficiency because a lot of children tend to spend most of their time inside homes to do homework, play games and watch television. The same finding was reported by Mansour and Alhadidi in Jeddah city.1

Sun exposure is an important factor of vitamin D levels, which is in accordance with supplementary researches and the reality is that the main origin of vitamin D is exposure to sun. In our cases the average span of sun light exposure was lesser than that recorded in various other investigations.

We observed that 75% of cases are taking less than 200 IU vitamin D daily. These indicate the demand to impart children with additives and diet abundant in vitamin D. In USA, the incidence of vitamin D insufficiency was 14%, about 50 to 60% of infant obtain the endorsed USDA intake of 200 IU of vitamin D regularly via diet and/or supplements. There is a proof that the endorsed daily intake of vitamin D needs to be increased to reach a minimal serum of vitamin D level of 20 ng/ml.

The limitations in our study were limited number of children participated and absence of measurement of fat mass with BMI.

High prevalence of vitamin D insufficiency was evaluated and its rate was higher than that reported by Mansour and Alhadidi, among healthy children living in a sunny city (Jeddah) KSA in this investigation. Early general test for vitamin D is highly recommended for all children even healthy ones. Parents, teachers and health caregivers should be knowledgeable and informed about vitamin D and its importance in growth and development of our kids. We should help parents to choose healthy vitamin D- enriched diet for their children to improve vitamin D levels for them. We must aware the society about healthy exposure to the sunlight. Further studies on larger number and a broader are advised for good evaluation of vitamin D status and management.