This survey aimed to study the occurrence of Listeria species in fish and meat samples and characterization of their virulence genes. Over all, Listeria spp. was found in 25.22% samples out of which 9.0% and 16.21% were L. monocytogenes and L. innocua, respectively. L. monocytogenes (n=10) belonged to 4b, 4d and 4e serovars. All the isolates revealed presence of virulence genes- plcA and iap, while plcB gene was also present in 90% of the isolates. The occurrence of L. monocytogenes in samples shows cogent evidence for their zoonotic potential and has public health significance.

The genus Listeria is facultatively anaerobic, rod-shaped bacteria and dispersed in food, environmental and clinical samples1. L. monocytogenes is a known pathogen, whereas the pathogenicity of L. seeligeri, L. ivanovii and L. innocua have been less documented2. Listeria monocytogenes is disseminated from animals to humans through fecal-oral route. The fatality rate is higher (30 to 75%) especially in pregnant women, neonates, aged people and people with grievous underlying disease conditions like immune-suppression3. Ninety percent of cases of Listeria contamination due to use of contaminated food products are reported4.

Listeria monocytogenes was differentiated into 13 serotypes5. Only serotypes 1/2a, 1/2b, 1/2c and 4b are responsible for 95% of human illnesses6. In 2012 in the US, serotypes 4b (54%) and 1/2a (28%) were most commonly identified7. Many virulence determinants act as essential factors for the pathogenesis of L. monocytogenes, including hlyA, inlA, inlB, inlC, inlJ, actA, iap and plcA gene8. The hlyA gene is the main virulence determinant in L. monocytogenes; a hemolysin gene. The pore-forming cytolysin listeriolysin O is encoded by this hlyA gene. The product of hlyA is the first virulence factor which play a vital role in the L. monocytogenes pathogenesis, helps in intracellular parasitism9.

Little information is available on Listeria contamination in animal originated foods from North-East India. This survey aims to estimate the Listeria spp., identify the main serotypes and to screen the L. monocytogenes isolates for presence of different virulent genes.

Collection of Samples
One hundred and eleven (111) samples, including fish gill, fish intestine and beef (15 each), chicken and pork (24 each) and mutton (18) were collected from various markets in Aizawl, Mizoram, a hilly state in the North-Eastern region India. The samples were collected aseptically by maintaining cold chain and were processed for microbiological analysis within 24 h. This study was conducted for a period of one year from July 2018 to June 2019.

Isolation of Listeria
For isolation of Listeria, ISO 11290 method was used. Each sample was inoculated aseptically in Half Fraser Broth followed by incubation at 30°C. It was subcultured in Fraser broth, further streaked onto PALCAM agar and incubated at 37°C. The grey-green colonies on PALCAM agar with diffuse black-zone was plated on Tryptone Soya Yeast Extract agar. Gram staining and Biochemical tests comprising catalase test, fermentation and acid production from various sugars, followed by MR/VP tests were performed for identification of the isolates. All the Listeria isolates and the control strain were preserved in nutrient agar stab (with 1.5% agar agar) and 16% glycerol for subsequent analysis. L. monocytogenes ATCC 13832 was utilized as the standard strain.

A 25 µl volume of reaction mixture was prepared for PCR same as prepared for Listeria identification. Listeria monocytogenes (ATCC 13832) serotype 4b was used as the positive control. PCR conditions for amplification were as previously described by Michel et al.10

After confirming the isolates by hlyA gene, a simplex PCR was done to determine the three virulence genes, plcA, plcB and iap (Table 3). The composition of reaction mixture was the same as for the other genes used in this study. PCR conditions for amplification of all the three virulence genes were standardized at denaturation at 95°C (5 min.), followed by thirty cycles of 95°C (30 sec.), 52°C (30 sec.), 72°C (30 sec.) and a final elongation at 72°C (5 min.). 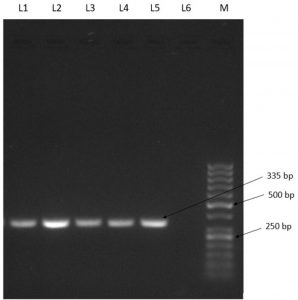 Serotyping
All L. monocytogenes showed PCR amplification of both ORF2819 and ORF2110, which identified them as serovars 4b, 4d or 4e (Fig.’s 2 and 3). Serovars 1/2a, 1/2b and 4b are linked with listeriosis16 and 4b was linked with major outbreaks of listeriosis17. Thus, the presence of serovar 4b in foods inflicts greater warnings on human health18. Serotype 4b was proclaimed from 37.2% of foods in Turkey19 as well in India and the United States of America with 60.4%20 and 16.4%21, respectively. The difference in rate of the prevalence might be due to contradiction in the types of foods selected for each investigation. According to Michel et al.10, the serotypes 3a, 4d, and 4e are infrequent in foods, therefore the serovars 4b, 4d and 4e were marked as 4b serogroup. In the present study, all the isolated L. monocytogenes were confirmed as 4b serogroup which is a major public health concern, since isolates of L. monocytogenes belonging to this serogroup are potential human pathogens. 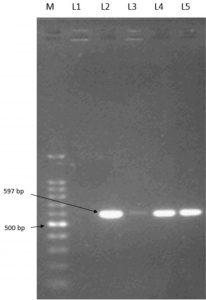 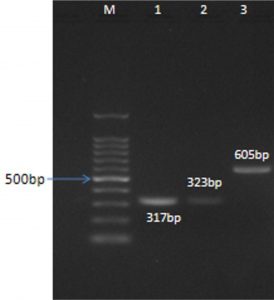 In a study in North-East India, Pegu et al.22 found virulence-associated genes, hlyA (40.7%), iap (29.6%), plcA (40.7%) and plcB (22.2%) of 27 isolates from fish. The mechanism of pathogenicity of L. monocytogenes is stated to be usually associated with production of haemolysin encoded by hlyA gene23. In our study, all the suspected isolates exhibited existence of hlyA, plcA and iap genes. This indicated that the isolates are potentially pathogenic. Occurrence of such pathogenic bacteria in meat has significant public health implications.

This seems to be the first study on isolation and serogrouping of L. monocytogenes in foods from Mizoram. The prevalence of serogroup 4b reported to be associated frequently with human listeriosis seems to be of serious public health concern. These virulent strains can contaminate other foods during processing, packaging or storage. Hence, large-scale screening of various food and food products sold in the markets of northeast India at regular intervals for the incidence of virulent strains is of utmost importance.

AVAILABILITY OF DATA
All datasets generated or analyzed in this research are included in the manuscript.