Chitosan nanoparticles have attained more attention due to its potential applications in food, agriculture and pharmaceutics. Owing to its high biodegradability, and nontoxicity and antimicrobial properties, chitosan is widely-used as an antimicrobial agent either alone or blended with other natural polymers. The purpose of the experiment was to assess the antimicrobial bustle of chitosan based nanoparticles against few medical pathogens by using chitosan conjugated nanoparticles which are prepared based on the ionic gelation of chitosan extracted from the crab shell waste along with tripolyphosphate (TPP) anions. The chitosan nanoparticles characterization was confirmed by the diffraction study and spectral analysis. The size of the nanoparticle was identified using Transmission electron microscopy (TEM). The spectral studies showed a characteristics bands of –NH2 (amide) at 3450cm-1 and carbonyl at 1629cm-1. X-ray diffraction (XRD) patterns also indicated two characteristics crystalline peaks approximately at 20° and 35° (2q). The antibacterial activity of chitosan nanoparticles against medical important pathogens such as Escherichia coli, Staphylococcus aureus was estimated using minimum inhibitory concentration (MIC). The presence of primary amine groups in repeating units of chitosan grants reveals it several properties like antibacterial activity, antitumor activity.

Chitosan is a linear polysaccharide composed of randomly distributed b-(1—4) linked D-Glucosamine (deacetylated unit) and N-acetyl-D-glucosoamine (acetylated unit). It is made by treating the chitin shells of the shrimp and other crustaceans with an alkaline substance, like sodium hydroxide. Chitosan and its derivatives have shown broad range of applications due to their antimicrobial and antifungal activity. It is made by treating the chitin shells of shrimp and different scavengers with a basic substance, similar to sodium hydroxide. Chitosan has conceivable biomedical employments. It may be utilized in horticulture as a seed treatment and biopesticide, helping plants to fend off contagious diseases. The chitosan is a characteristic nontoxic biopolymer by the removal of acetate in chitin1.

The chitosan based application started two decades back, with concentrates on the natural marvels emerging from nourishment borne and soil borne pathogenic organisms in the sustenance and farming ventures2. Chitosan and its derivatives have shown impressive enthusiasm because of their antimicrobial and antifungal activities. The antibacterial activity of chitosan is affected by different components that depend mainly on the different types of chitosan, the dimension of chitosan polymerization and a part of its other physicochemical properties. The antibacterial activity of chitosan is affected by different components, including the kinds of microorganisms, pH, dissolvable and sub-nuclear mass3,4. This found antimicrobial properties of chitosan were improved by stacking chitosan with different metals. The removal of the acetate ions from the chitosan microspheres was set up for controlled landing of dynamic antimicrobial administrators, for instance, amoxicillin antibiotics and metronidazole in the gastric pit5. Chitosan and its subsidiaries additionally have natural implementations in the field of antimicrobial and biomedical applications, for example, expansive range antimicrobial movement6-10. In winemaking, it tends to be utilized as a fining operator, additionally avoiding waste. In industry, it very well may be utilized in a self-recuperating polyurethane paint covering. In medication, it is valuable in swathes to lessen draining and as an antibacterial specialist; it can likewise be utilized to help convey sedates through the skin.

The crab shell via chitin was prepared from the dead and dried crabs, which were collected from the fish market in the locality. The flesh was removed and the exoskeleton was crushed and made into fine powder by commercial mixer. The powder was then transferred to a sterile beaker and left for air-drying in room temperature. Chitosan was obtained from the crab shell in the form of chitin. The run of the mill generation of chitosan from shellfish shell for the most part comprises of three fundamental processes, which include the demineralization, deproteinization and deacetylation. The shells were demineralized by disrupting reliably with 5% Hcl at the extent of 1:15 (w/v, shell to plan) 36 h at room temperature. The demineralized shells were treated with 5% NaOH course of action at the extent of shell to of 1:10 (w/v) at 90-95°C for 5 hours. The deproteinized removed shells were isolated and washed with fixture water until NaOH was emptied absolutely, by then dried medium-term in an oven at 55-60°C. The shells were filtered and washed with deionised water until wound up objective. By then de acetylating of the chitosan was then completed by hydrolyzing with 80% NaOH at the extent of 1:20 (w/v, chitin to dissolvable) at 90-95°C for 5 hours. The obtained extract was washed with water until it ended up unprejudiced and dried medium-term at 55-60÷C. In the arranging of chitosan 1.0% (w/v) chitosan were dispersed in a 1.0% (v/v) acidic destructive course of action. Chitosan activity was procured and disrupted over night with a stirrer and autoclaved at 120°C for 15 minutes at 15-PSI weight11.

Assay for antibacterial activity
1 ml of the microorganism innoculums to be tested was added to 0.9 ml chitosan solution (0.1 or 1% w/v) in 0.1 M sodium acetate buffer with a PH 6.5 under aseptic conditions. The mixture was incubated in orbital shaker for 1 h at 37°C, and the number of viable cells was calculated. To get the microorganism suspension, a loopful of inoculums from the agar plates with sterile tampon into clean saline (0.9%) solution, at that point weakened to 10 5–10-6 settlement/ml. Test arrangements were autoclaved at 121°C for 15 min. One milliliter of test arrangements and 9 ml autoclaved supplement agar were filled in the autoclaved petri-dishes, cooled, one ring of microorganism suspension was drawn as line on cooled supplement agar, Minimum inhibitory concentration was carried out (MIC) 12.

Sulphated ash studies and morphology of the chitosan nanoparticles
The powder substance of the separated chitosan from the crab shell was evaluated by utilizing the mute heater. The powder estimation is a marker of the viability of the demineralization venture for expulsion of CaCO3. Disposal of the demineralization brought about items having 31-36% of the fiery remains13. The removed crab shell squander had 35.27% fiery remains content. The fiery remains substance of the chitosan acquired in this examination was run from 0.36% to 4.25% with huge contrast. The Table 1 demonstrates the substance of the dampness, sulphated cinder and the yield. The outcomes appeared in the (Fig. 1) demonstrates the remaining movement of the chitosan extricate when treated with different groupings of HCl. The qualities demonstrated that 4% and 3% HCl can adequately lessen the fiery debris substance of the got chitin up to 0.36% and 0.50%, separately. A few polluting influences, for example, the left over fiery remains may influence the solvency, subsequently adding to bring down thickness, or can influence other progressively last items14.

Fig.1. The residual activity of Chitosan extract with various concentration of hydrochloric acid. 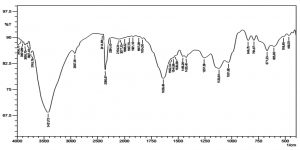 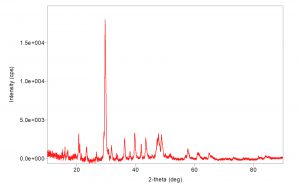 Fig. 4. The growth curve showing the various concentration of ciproflaxin conjugated chitosan nanoparticles and its effect on E.coli.

Table (2):
Shows the MIC of chitosan nanoparticles conjugated with antibiotics towards th microorganisms in water and acetic acid.

The Antimicrobial activity of the chitosan-conjugated nanoparticles showed that the ciproflaxin had enhanced activity on the bacterial strains. The ciproflaxin antibiotics had shown enhanced activity towards the E.coli growth when measured in the spectrophotometer when compared to the S.aureus. The Fig. 4 and 5 Shows the optical density was measured at a wavelength of 600nm where the concentration of 50µg shown a high value for the growth of the E.coli rather than the S.aureus. The conjugated chitosan nanoparticles show a similar absorbance with that of the controls which is the antibiotic ciproflaxin alone. The crude extract of the chitosan nanoparticles showed that the values are similar to the commercial available antibiotics. The pure chitosan if purified is used can enhance the activity of the chitosan towards the pathogens.

Fig. 5. The growth curve showing the various concentration of ciproflaxin conjugated chitosan nanoparticles and its effect on S.aureus. Microscopic study using TEM
Transmission electron microscopy (TEM) was used to investigate the surface morphology of chitosan nanoparticles. Micrograph of (Fig. 7) shows that chitosan nanoparticles has uniform, very well capped particle structure less than 120nm in size. There is no agglomeration of nanoparticles (may be due to the presence of the chitosan as capping agent) and the surface was somewhat rough. The present study showed that the morphology as a smooth and size was 100nm20. The TEM revealed nanoparticles with average size of 90nm with narrow size distribution. In another study chitosan/DNA, nanoparticles were prepared through simple electrostatic interaction between the cationic chitosan and anionic DNA. Showed that the TEM images shows the chitosan chain dimension of around 20-40nm, consistent with a hydrodynamic radius of 15.8nm. Fig. 7. TEM micrograph showing the size of the chitosan nanoparticles.

The study showed that the chitosan obtained from the extracts crab shell waste showed that the positive face charges improves the strength in the presence of biological cations and improve for their antibacterial activities due to the communication with negatively charged biological membranes and site specific targeting in vivo. The chitosan-loaded nanoparticles along with the antibiotics showed the high antibacterial potential against the microorganisms. The study reveals to facilitate chitosan nanoparticles to be generally used as the antimicrobial agent in medicine for their high antibacterial activity and acceptable biocompatibilities and mainly used as biopolymers and it can be used for the targeted drug delivery mechanism. The morphology of the chitosan nanoparticle showed a size of 100nm that was comparatively higher when compared to previous obtained nanoparticles derived from the chitosan from the crab shells.