In this study, sixty specimens were collected of Staphylococcus aureus isolation from several sources but found twenty-five specimens of Staphylococcus aureus isolated from skin from External laboratories in Baghdad, Iraq, during the period of December to May 2018. Then the samples were inoculated on culture media (Mannitol agar). The results of the sequencing showed congruence with isolation Staphylococcus aureus of amplified product of 16S rRNA gene appeared 99%compatibility. The results as shown After alignment of product amplification of 16S rRNA having seven Transition(A>G, A>G, T>C, T>C, G>A, C>T and A>G, and having three Transversion (T>G, G>C and A>T) from the Gene Bank.Registration of Iraqi isolate for Staphylococcus aureus bacteria in National Center for Biotechnology Information and under the accession number MH 145371.1. and it is available for download at NCBI: https://www.ncbi.nlm.nih.gov/nuccore/ MH 145371.1. The aim of the study was to determine the phylogenetic tree of Staphylococcus aureus based on 16S rRNA sequencing.The local Iraq isolate was registered after the correspondence of (NCBI), and obtained accession number and became a reference to Iraq and the Middle East and the world found variations of the local strain on the world.

Staphylococcus aureus is a ubiquitous organism responsible for widespread infections both in community as well as in hospital settings1. These infections include pneumonia, skin and soft tissue infections, osteomyelitis, endocarditis, toxic shock syndrome etc.2. Skin and soft tissue infections ranged from furuncle, carbuncle, boil, impetigo, erysipelas, cellulitis, and abscesses to surgical site infections etc. Incision and drainage is the primary therapy for abscesses3. Staphylococcus aureus is a Gram-positive coccus bacterium, facultative anaerobic, catalase-positive, with single cells aggregate in clusters. Its responsible for many infection in human for example skin lesions (impetigo, furunculosis, folliculitis, hidradenitis-suppurativa, mastitis and Staphylococcal scalded skin syndrome.), in addition to infections of the subcutaneous tissue4. its colonizes the mucous membranes of  nasopharynx, it is presented in apportion 50-60% in human as carriers5. The carrier state is a major risk factor for staphylococcal food poisoning, folliculitis and furunculosis6. S. aureus is transmitted mostly via contaminated hands of patients and medical staff and this lead to nosocomial infection. S. aureus has multiple factors and mechanisms of antibiotics resistance thereby is able to cause health and life-threatening infections4. The major virulence factors in this bacteria include enzymes, peptidoglycan and toxins. Other factors which lead to  damaged tissue include (protein A and clumping factor)7. Hemolysin and Panton-Valentine leukocidin cause killing of white blood cells and red blood cells, whereas hyaluronidase, lipases, proteases, DNA, coagulase and fibrinolysin facilitate spreading the toxins within the human body8. PCR amplification from protected regions of the bacterial genome, especially the 16S rRNA gene followed by sequence analysis, is a steadfast technique for the identification of Enterobacter cloacae9. 16SrRNA gene sequence are considered as perfect standard for conclusion the phylogenetic relationship of microorganism10,11. Aim of the study was to determine the phylogenetic tree of Staphylococcus aureus based on 16S rRNA sequencing.

Bacterial isolates
In this study, sixty specimens were collected of Staphylococcus aureus isolation from several source but found twenty five specimens of Staphylococcus aureus isolation from skin. Then the samples were inoculated on culture media (Mannitol agar). Microscopic examination was done by using Gram stain 12. Mannitol salt agar was used as selective medium13.

PCR amplification of 16S rRNA genes
Partial 16S rRNA gene sequences were amplified by PCR using primers 16S rRNA Forward strand primers 5’- AGAGTTTGATCCTGGCTCAG -3’ and Reverse strand primers 5’- GGTTACC-TTGTTACGACTT -3’ 14. The PCR reaction mixture included 1.5 ml of bacterial DNA, 16.5 of ddH2O, 5 ml Master Mix PCR (intron, korea), and l ml each primer in a final reaction volume of 25 ml. Amplifications were performed as follows: initial denaturation at 5 min at 95°C, followed by 40 cycles of denaturation 95°C for 45 sec, annealing at 52°C for 1 min, extension at 72°C for 1 min and a final extension of 72°C for 7 min. The PCR products were separated on 1% agarose gel. The gel is left to run for 90min with a 70volt/65Am current. Following electrophoresis, visualization was conducted with a UV trans illuminator after red stain staining.

Genetic Detection of Staphylococcus aureus by 16S-rRNA
The present research findings pertain to the isolation of Staphylococcus aureus ,samples were confirmed as on the basis of morphological, and molecular characterization . PCR is a rapid, sensitive, specific and inexpensive method. After gradient PCR has been performed ,bands has been obtained as presents in Figure 1. Showing that the best annealing a temperature to give 16S-rRNA was (52°C, 45s) depending on results of gradient PCR amplification procedure Several studies have used PCR for the detection of 16S rRNA by PCR method more rapidly and reliably. The results of current study agree with result of a same study in Iran reporte15. Who noticed that amplification of 16s-rRNA confirmed all the  staphylococcal isolates as Staphylococcus aureus. Utilizing the 16S rRNA gene instead from whole genome information is not only computational efficient but also economical16 however, will provide an analysis that demonstrates that at least in the context of oral microbial communities, the 16S rRNA gene retains sufficient information to allow us detect unknown bacteria17. Figure 1 showed PCR amplification of the 16SrRNA where a specific product at 1250bp was observed. 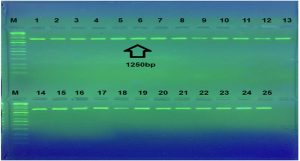 Sequencing
The sequencing and BLAST analysis of partial 16S rRNA gene figure 2 and 3. The results of the sequencing showed congruence with isolation Staphylococcus aureus of amplified product of 16SrRNA gene appeared 99% compatibility. (87 to 1178) number of nucleotide from gene of gene bank, and have number score (1925) bits, expect (0), and corresponds to the global number ID: NR_118997.2. The  results as shown After alignment of product amplification of 16S rRNA having seven Transition (A>G, A>G, T>C, T>C, G>A, C>T and A>G, and having three Transversion (T>G, G>C and A>T) from the Gene Bank. 16SrRNA gene was successfully amplified using specific PCR primers for gene. Submission of local Iraq isolate in NCBI
Broad-range PCR targets the 16S rRNA gene which  is the most common housekeeping genetic marker because the ribosomal small subunit is present universally in all bacteria28. Registration of Iraqi isolates for Staphylococcus aureus bacteria in National Center for Biotechnology Information and under the accession number MH 145371.1. and it is available for download at NCBI: https://www.ncbi.nlm.nih.gov/nuccore/ MH 145371.1.

The efficiency of genetic methods in the detection of accurate and rapid bacterial isolates thus shortening the time and cost and giving the correct treatment and accurate treatment of disease without error and time loss. After obtaining the  global number of Iraqi isolates proved near the Iraqi isolates of the isolates USA :North Dakota , South Korea: Seoul.

Acknowledgements
Praise be to Allah, the Lord of words. First of all, I owe the utmost sincere gratitude to my creator, Allah, for giving me strength and patience to face the difficulties of completion of this Research. I would like to thank the Al-maarif University College, Department of Medical Laboratory Techniques , and all the staff of Biotechnology Research Center, Al-Nahrain University.