The virulence factors of dermatophytes play a vital role in the etio-pathogenesis and emergence of drug resistance. Regular surveillance is essential for constant monitoring of association of virulence factors in the emergence of drug resistant isolates and to guide proper therapeutic strategies to combat infections due to drug resistant isolates of dermatophytes. The aim of this study is to isolate and identify various enzymatic and non-enzymatic virulence factors of dermatophytes isolated from clinically suspected cases of dermatophytosis attending the dermatology outpatient clinic. From 30 clinical samples received from department of Dermatology to the department of Microbiology during the study period July to December 2019, KOH mount and fungal culture was done and only the isolates which grew dermatophytes were used for detecting virulence factors using standard methods. Among 30 affected patients, 13 were male (43.3%) and 17 were female (56.7%) with age range of 13 to 60 years. Skin sample yielded positive growth in 96.6% of the cases. Out of 30 samples, 6 samples were positive for Trichophyton mentagrophytes. Tinea corporis was the common manifestation which yielded positive growth. Female predominance was seen. Male predominance was seen in younger age group while females were more commonly affected in older age group. Adolescents were commonly affected age group (40%). Then people between age 41-50 (middle age group) were mostly affected. The six Trichophyton mentagrophytes were found to have enzymatic and non- enzymatic virulence factors. All the virulence factors included in the study were present in Trichophyton mentagrophytes.

Dermatophytes are known as fungal agents causing infections in immunocompromised individuals and also nosocomial infections. Based on the habitat, dermatophytes are divided into three groups like: Zoophilic (animal), anthropophilic (humans) and geophilic (soil). In developing countries like India, dermatophytic infections are predominantly seen. In addition the disease is more common in this country because of the prevalence of hot and humid weather1. Over the past few years, the prevalence and incidence of dermatophytosis is increasing at an increasing rate across the country2. The immunity of the host will determine the disease outcome which ranges from cutaneous or subcutaneous to invasive, disseminated, and life-threatening infections3.

Clinical cure is associated with development of cell mediated immunity. Pathogenesis of dermatophytes involves mainly three steps like adherence to the host tissue, invasion, and progression of host immune response. Pathogenesis is also due to production of virulence factors which may be involved in the emergence of anti-fungal resistance. Studies have been done on the production of virulence factors like protease, lipase enzyme and hemolytic (CAMP-like) activities of the dermatophytes.

Proteolytic effects have been identified and also differentiated from bacterial proteolytic effects. The enzyme is helpful to characterize and identify the microbial proteases and play a major role in pathogenesis of infectious diseases. Extracellular enzymes like keratinase, elastase, protease, phospholipase, lipase, hemolysins and CAMP like factors are produced by dermatophytes using plate assay technique. Hemolytic factor plays a vital role in dermatophytic infections because of the cytotoxic effects on RBC as well as phagocytic cells which results in the formation of pore and lysis4. Important fungal pathogens like Trichophyton mentagrophytes, Trichophyton rubrum, Microsporum canis and Microsporum gypseum were more commonly isolated from the keratin substances in hair with production of keratinase activity.

In the past few years, antifungal resistance has emerged because of the irrational use of antifungal agents in cutaneous mycotic infections5. Routine monitoring is essential for the surveillance of drug resistant isolates and also for timely tracking of virulence factors on dermatophytic fungal infections to pay a way for proper treatment. So to know the exact picture of dermatophytosis in India, there is need for more studies in vitro6. The present study was to phenotypically characterize the enzymatic and non-enzymatic virulence factors, and evolution of drug resistance among clinical isolates of dermatophytes.

These 30 samples were parallely observed with microscope using Potassium hydroxide (KOH) mount and then it was inoculated simultaneously in plain Sabourauds Dextrose agar and Sabourauds Dextrose agar with chloramphenicol (30µg), Gentamicin (30µg), and Cycloheximide in duplicate. These inoculated plates were incubated at 25°C and 37°C and were regularly monitored for about six weeks. The growth of the dermatophytes were identified based on their colony morphology, microscopic examination by using lacto phenol cotton blue (LPCB) mount. Among 200 patients visited OPD of Dermatology department, 30 patients clinically diagnosed for dermatophytosis irrespective of their age and sex and who were not undergoing treatment for the same were included in the study.

Enzymatic virulence factors
The phenotypic identification of enzymatic virulence factors were performed for these dermatophyte isolates according to the following methods: Phospholipase and Protease production was done using Candida albicans as positive control. The dermatophytes were inoculated on egg yolk agar and incubated at 25°C for 2 weeks, clear halo zone of precipitation around the colony indicates phospholipase enzyme production7. For Gelatinase (protease) production, the dermatophytes were stab inoculated into gelatin tubes and incubated at 25°C for 2 weeks. Formation of clear zones around the colonies indicates gelatinase enzyme production. Staphylococcus aureus was used as positive control7.

Non-enzymatic virulence factors
The phenotypic identification of non-enzymatic virulence factors like hemolysin was detected using Colombia agar with 5% sheep blood and the plate was incubated at 37°C for 1-5 days as explained by Schaufuss et al.10 Production of CAMP like factor (Co-hemolytic activity) was performed using the standard strains of bacteria S.aureus (ATCC 25923). After incubation time for hemolytic activity, the edge of a loop was used to streak each bacterium in straight lines across the plate at a distance of 10 mm from the border of dermatophyte colony. The plates were then incubated at 25°C and inspected daily for 1-7 days. A distinct arrow head zone of hemolysis at the intersection of the standard strain and the test dermatophte colony was considered as positive result for CAMP-like reactions10 . 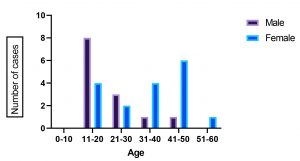 Fig. 1. Distribution of patients according to sex 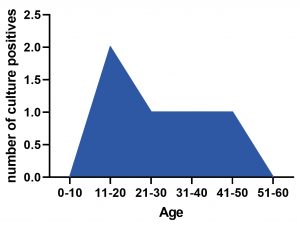 Fig. 2. Distribution Of Patients According To Age 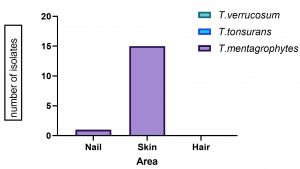 In this study many clinical specimens like hair, skin, nail and tissues were received in the mycology laboratory. Skin was the predominant clinical manifestation in 96.6% of the cases
(Fig: 3). This is similar to the study where out of 150 children recruited in the study and examined for Tinea infections, 81.3% (122 persons) were found to have skin lesions caused by dermatophytes17. All six samples were taken from patients with Tinea corporis in our study. Nearly, 66.6% of Tinea corporis was identified and 10% of patients presented with the dermatophytic infections (Fig: 4) which is similar to the study done by Surendar et al where they have reported Tinea corporis as the commonest clinical manifestation (44.3%)13. In the studies by Veena timmappa et al, Tinea corporis was reported as the commonest presentation (40.5%)18. But Tinea cruris was the most common clinical presentation (23.4%) followed by Tinea corporis14% in a study done by Ujjwal kumar et al19. 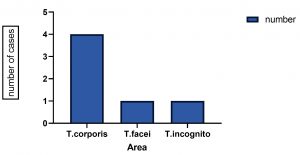 An enzyme called lipase, plays a major role in the early stages of infection initially by breaking the lipid surface layer and colonizing the stratum corneum of the skin .The enzymatic virulence factors like phospholipase, lipase, proteinase, gelatinase, elastase and the non-enzymatic factors like hemolysin and CAMP-like factor production plays vital role as biomarker for identification of dermatophytes. Our study is in par with study done by Elavarasi et al where the virulence activity of phospholipase, lipase, protease and gelatinase was observed in all the dermatophyte species7.

Dermatophyte infections are very common in our country due to hot, humid climate and poor hygienic conditions.

The enzymatic and non-enzymatic virulence factors of dermatophytes contribute a major role in emergence of anti-fungal drug resistance. Our study emphasizes the importance of identifying these virulence factors among clinical isolates of dermatophytes. The emergence of resistance may reflect poor antifungal stewardship. Periodic monitoring of fungal profile is essential. Strict policy should be formulated to avoid irrational use of anti-fungal agents responsible for emergence of drug resistance.

ETHICS STATEMENT
This research work has been approved by our Institutional Human Ethics Committee (IHEC).

AVAILABILITY OF DATA
Data available in the Department of Microbiology, Mahatma Gandhi Medical College & Research Institute, Pondicherry. Could be provided if necessary, to anyone.