Escherichia coli (E. coli) is a significant species and a common dweller in the guts of humans and animals causing urinary tract infections, wound infection, otitis media, bloodstream infections, and other complications in humans. Worldwide resistance to antimicrobials is a serious public health problem. β-lactamases production by E. coli is responsible for resistance to frequently used beta-lactam antibiotics. 1) To determine antibiotic susceptibility pattern of Escherichia coli isolated from pus and urine samples 2) To determine ESBL producing Escherichia coli and its antibiotic susceptibility pattern. Retrospective study of E. coli isolates from urine and pus samples was performed by collecting data from bacteriology registers. Gender, age details of patients, number of E. coli isolates, and their antimicrobial susceptibility profiles were collected from the records. Out of 747 samples 102 E. coli were isolated and among them 60 (59%) were ESBL producers. Male preponderance was seen i.e. 59 (57.84%) and majority 68 (66.66%) were isolated from the age group of <18 years. E. coli showed maximum sensitivity to imipenem 88 (86.27%), followed by piperacillin-tazobactam 84 (82.35%), aminoglycoside group 76 (74.5%) and maximum resistance was seen to penicillin groups 92 (90.19%), followed by cephalosporins 71 (69.6%). Urinary isolates showed maximum sensitivity to nitrofurantoin (93.67%). ESBL producers showed resistance to ciprofloxacin 47 (78%). This study helps in the periodic formulation of regional antimicrobial policies and also giving continuous information to the clinicians with respect to the sensitivity pattern along with ESBL production which can help to avert further drug resistance.

In the genus Escherichia, Escherichia coli (E. coli) is the most important species and a common dweller in the guts of humans and animals, and also dwells in vegetation, water, and soil. It is the predominant pathogen that causes urinary tract infections, and the most common isolated bacteria that cause wound infection, infections of the bloodstream, otitis media, and other human problems.1

Based on the severity of illness, pathogens isolated, the local pattern of antibiotic sensitivity, standard antibiotics are used to empirically treat these infections. In recent years, the therapeutic options have drastically decreased due to increased and high recurrence rates of antibiotic resistance. Acquired plasmids which code for extended-spectrum β-lactamases (ESBLs) harboured by E. coli are of concern as they are increasing globally.2 Unfortunately, a very narrow range of effective antibiotics is left as these plasmids rapidly spread resistance to all other important antibiotic groups including aminoglycosides and the fluoroquinolones.3

A key example of antibiotic resistance that can cause fatal infections is multidrug-resistant (MDR) and ESBL-producing Escherichia coli and any deferral in providing appropriate therapy can cause severe complications. Significant variations have been observed in the antibiotic resistance pattern between various geographic areas in India. As empirical treatment is given to most of the infections, the choice of the antibiotics should be based on the pathogen most likely to be isolated and its anticipated antimicrobial susceptibility.3 The present research was therefore carried out in order to understand the local antimicrobial susceptibility trends of the E. coli along with its ESBL pattern for providing a prudent empirical treatment.

Method of Data Collection
A retrospective analysis was conducted in the Department of Microbiology at the tertiary care hospital in the Chamarajanagar district of Karnataka. Ethical Clearance for the study was obtained from Institutional ethical clearance committee. For the analysis, secondary data of Escherichia coli isolated from urine and pus samples, maintained in the laboratory registers in the department of Microbiology, for a duration of 1 year from January 2019 to December 2019 were collected. The following information has been noted – name, age, gender details of patients, number of E. coli isolates, and their antimicrobial susceptibility profiles.

Bacterial isolation and identification
After receiving the urine and pus samples in the laboratory, they were processed according to the standard procedure for direct microscopy, aerobic culture, and sensitivity. Samples were streaked on to the respective medias and isolates were identified on the basis of colonial morphology, Gram stain, and biochemical reactions. In urine samples, significant bacteriuria was considered if culture yielded≥105 CFU/ml.4

Criteria for selection of ESBL strains
Isolates showing zone of inhibition of ≤ 22mm for Ceftazidime, ≤ 27mm for cefotaxime, and ≤ 25mm for Ceftriaxone by disc diffusion method were suspected of ESBL production.

Table (2):
Distribution of Escherichia coli isolates according to age and gender (n= 102). 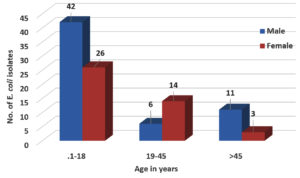 Fig. 1. Distribution of Escherichia coli according to age and gender. E. coli occurrence and susceptibility profiles show significant variations in various populations, environments, and geographical areas. The prevalence of E. coli in our study was 13.65%. These results are similar to the findings from other research.1,6,7 Many researchers have reported a higher prevalence rate ranging from 60%-80%.8-12

Resistance to antibiotics in E. coli has been reported globally and its rising rates in both developed and emerging nations are a serious concern as it complicates the treatment of infections. This may be attributed to increasing unreasonable intake or non-compliance with medication, self-medication of antibiotics available without a prescription, sales of drugs of inferior quality, eating food from animals that have obtained antibiotics, and spreading resistant isolates among individuals.1 By and large, E. coli resistance to antibiotics in this analysis was high.

Among the several antibiotics tested, E. coli isolates showed maximum sensitivity to Imipenem (86.27%), piperacillin-tazobactam (82.35%), and aminoglycoside group (74.5%), and maximum resistance to penicillin group (90.19%), cephalosporin group (69.6%) and ciprofloxacin (59.8%). These findings are consistent with other studies.1,3,8,9,11,13-18 Maximum sensitivity (93.67%) to nitrofurantoin was observed in this study, which is similar to the previous studies.6,7,15 As this drug is sparsely used in the outpatients’ department for the treatment of uncomplicated lower urinary tract infections as it does not achieve bloodstream therapeutic concentrations and is used for complicated cystitis only.

ESBL producing E. coli has been considered as the main risk to public health and is associated with a high death rate, increased duration of hospital stays, and high cost.13 ESBL producing E. coli was higher (59%) in our study which is in concordance with other studies2,3,12,14,15,19 and this may be attributed to the increasing use of antibiotics both in outpatient and hospitalized patients and definitely needs to be used with caution as an empirical choice.

Concurrent administration of β- lactamase inhibitors such as clavulanate or sulbactam, along with β- lactam antibiotics increases the spectrum of activity. ESBL producing E. coli. showed maximum sensitivity to imipenem (83%) followed by piperacillin-tazobactam (72%), aminoglycoside group (65%) and resistance to ciprofloxacin (78%), cotrimoxazole (72%). Other researchers have reported similar results.20

Unfortunately, the mechanism of drug resistance by ESBL-producing organisms comprises the plasmids that carry the genes of beta-lactamase that transmit the resistance to other classes of an antibiotic such as the aminoglycosides and the fluoroquinolones, allowing limited therapeutic choice and increased threat of treatment failure in patients infected with such strains.16 In our study fluoroquinolones resistance was seen by ESBL producing E. coli.

Carbapenems are the last choice for the treatment of many bacterial infections and lately, warnings have been raised about the spread of resistance to carbapenem groups due to New Delhi metallo-β-lactamase (NDM-1) production. Presently, no new antibiotics are in the pipeline to battle carbapenem resistance, and the spread of this gene globally. Resistance gene spread is considered to be a potentially frightening situation.8 Our study revealed 86.27% sensitivity to imipenem and this drug could be a reserved therapeutic option for infections that have not responded to other antibiotics.

E. coli is one of the most common pathogens associated with UTI and pus-forming lesions, worldwide. The increased rates of antibiotic resistance have left clinicians with fewer therapeutic options. Since drug resistance is an evolving process, its recognition by clinical microbiologists becomes the need of the hour. To detect ESBL producers test like the combination disk method can be regularly done. The hospitals should have its own antibiotic policy, based on the local susceptibility profile of area-specific pathogens and the clinicians should be constantly informed about the periodically revised antibiotic policy.