Staphylococcus aureus causes one of the most common types of chronic mastitis.
Mastitis is an inflammation of the mammary gland with local and symptoms that
occasionally result in a systemic infection. This disease has profound impact on animal
welfare and milk quality. This study allowed us to determine the MLST and spa typing
diversity of Staphylococcus aureus isolated from cases of bovine mastitis in the west
Algeria. The first purpose of this work was to investigate the phylogenetic profile of
Staphylococcus aureus by spa typing and Multilocus sequence typing (MLST) isolated
from Mastitis subcliniques and clinical cases which were previously investigated by
Mass Spectrometry Maldi-Tof and spa typing. The second purpose was to determinate the
complex clonal of strains. In total, 213 quarters milk samples were collected from 56
dairy cows at 6 farms in the region of Oran, from 2011 to 2012. The quarter milk samples
were bacteriological analyzed and scored using California Mastitis Test. The prevalenceisolated bacteria were Staphylococci (38.9%).

Although several bacterial pathogens can cause mastitis, Staphylococcus aureus is one of the most prevalent etiologic agents of this disease in dairy cattle [17, 4], Staphylococcus aureus is involved in a wide variety of diseases in humans and animals and its pathogenicity is mainly related to a combination of toxin-mediated virulence, invasive capacity, and antibiotic resistance[4, 3].

As an agent of intra-mammary infections, this pathogen can contaminate the bulk milk tank and thus may constitute a bacteriological hazard for raw milk dairy products consumed. In this context, molecular subtyping tools are of great interest for the comparison of genotypes in order to identify sources and transmission routes for control improvement [5, 6], S. aureus encodes many virulence factors including the surface Ig-binding protein A (spa) whose function is to capture IgG molecules in the inverted orientation and therefore prevent phagocytosis of the bacterial cells by the host immune system [11, 12, 16].

During the past decade, the epidemiology of S. aureus mastitis in dairy cattle has been studied using various molecular typing methods. MLST is a relatively new approach to identifying [4, 9], MLST is an excellent technique for investigating MRSA clonality. MLST is based on the analysis of seven 500-bp sequences derived from housekeeping genes. The sequences represent distinct alleles and contain sufficient information to define the isolate using an online data search tool [4, 9].

The main mechanism of methicillin resistance in S. aureus is through the expression of a foreign Penicillin binding protein (PBP), PBP2a.MRSA differ genetically from Methicillin-sensitive S. aureus isolates by the presence, in the chromosome, of a large stretch of foreign DNA (40-60 Kb), referred to as the mec element and the presence of the mecA gene that encodes the 76 KDa penicillin-binding protein PBP2a (Also referred as PBP2).

The most intensively studied species of strains of  Staphylococcus, Staphylococcus aureus is a common pyogenic agent in humans and several animal species. The strains were selected as pure cultures obtained after mastitic milk cultivation on agar plates. Only one strain per case was considered for this study.

The aim of this work was to study S. aureus isolated from different cow’s milk produced in Algeria. The first aim of the present study was to use spa typing and Multilocus sequence typing (MLST) typing to investigated the phylogenetic profile of Staphylococcus aureus strains from mastitis in dairy cows, the objective was also to better determinate the clonal complex of strains. Detected MRSA isolates were further phenotypically and genomically characterized.

Bacterial strains
A selection of 56 MSSA isolates strains from cases of bovine mastitis clinical or subclinical cases of dairy bovine (n=118) in Oran were performed by bacteriological methods and by different molecular techniques (Maldi Tof and MLST, spa typing). The milk samples were collected all over Oran region during a year. The strains were selected as pure cultures obtained after mastitic milk cultivation on agar plates. Screening for pathogenic S. aureus was done by performing a determination of toxic profile by PCR in real time [4]. andvarious biochemical assays, including the coagulase test, β-hemolysis, DNase test and growth on S. aureus agar medium. Methicillin resistance was tested on columbia agar with 5.0% salt (Oxoid) with BBL Sensi-Disc 1 μg Oxacillin discs (BD) [4].

Identification Maldi Tof (Matrix Assisted Laser Desorption Ionisation Time Of Flight)
The mass spectrometry allowed us to determine and confirm the identification of the species of Staphylococcus aureus strains [8].

DNA extraction
To extract bacterial DNA requires the preparation of a DNA suspension from a bacterial strain [8]. Prepare a suspension of 4 to 5 colonies in 1 ml of sterile distilled water. Centrifuge 1 minute at 10000-12000 rpm and then remove the supernatant, Add 200 .µl of InstaGene Matrix to the pellet and incubated for 30 min at 56°C. High Speed Vortex for 10 seconds then places the tube at 100°C for 8 minutes. Collect the supernatant and store at -20°C until PCR [8].

DNA isolation was done following the mini preparation method. Isolated DNA samples were checked for purity and quantified by spectrophotometric analysis. The samples were then resolved on agarose gel (0.8%) with 1 ml of template DNA mixed with 3 ml of loading dye (xylene cyanol + bromophenol blue) and electrophoresed at 100 volts for 1 h. DNA samples showing intact bands were used for PCR amplifications.

PCR amplification of virulence genes
PCR amplifications of four virulence genes was done as described by Peacock et al. [14], Specific primers (Table 1) were used to amplify the four virulence genes in all S. aureus isolates. To amplify the, 25 ml of reaction mixture was made containing 20 ng of template DNA, 100 ng of primers genes, 160 mM of dNTP mix, 1.25 U Taq polymerase, 1X Taq buffer, and 0.5 mM MgCl2. All 67 isolates were amplified individually for all four genes using the specific primers, with 32 cycles of denaturation at 95°C for 1 min, annealing at 50°C for icaA, 45°C for sdrE, and 55°C for hlg and cna for 1 min, extension at 72°C for 1 min, and a final extension at 72°C for 2 min, on a DNA engine (PTC-100, MJ Research, USA). PCR products were resolved on 1.0% agarose gel at 60 volts for 2.5 h. Gels were stained with Ethidium Bromide solution (0.5 mg/ml) and documentation was done using the Gel Doc system (Bio-Rad).

Genotyping data production and analysis
Spa-typing
A staged spa-typing protocol was developed to enable identification of multiple-strain colonization on a large-scale. The polymorphic X region of the protein A gene (spa) was amplified with primers 1095 F: 5′-AGACGATCCTTCGGTGAGC-3′ and 1517R: 5′-GCTTTTGCAATGTCATTTACTG-3′ PCR reactions consisted of 0.25 mM dNTPs (Qiagen), 0.5 U of GoTaq Flexi DNA Polymerase (Promega), Colorless GoTaq Flexi Buffer, 2.5 mM of Magnesium Chloride and 0.25 μM of primers in a volume of 10 μl. PCR conditions were 94°C for 2 min, 35 cycles each of 94°C for 30 s, 50°C for 30 s, and 72°C for 60 s, and a final extension at 72°C for 5 min. PCR products were purified using Agent court AM Pure XP beads (Beckman Coulter)[8].

Samples were sequenced with the same primers as used in PCR. Sequencing reactions used BigDye v3.1 sequencing mix (Applied Biosystems) and were cycled using 30 cycles of 96°C for 10 s, 50°C for 5 s, and 60°C for 2 min. Products were purified with Agent court Clean SEQ beads (Beckman Coulter) and separated on an ABI 3730 DNA Analyzer (Applied Biosystems)[8].

Identification of rearrangements in spa-gene
A small proportion of isolates did not yield clean sequence traces with the original primers indicating the presence of rearrangements in the spa-gene. To identify possible rearrangements, primers spa-3 F: 5′-ATAGCGTGATTTTGCGGTT-3′ and spa-3R: 5′-CTAAATATAAATAATGTTGTCACTTGGA-3′ were used to amplify the whole spa-gene. As some isolates failed to amplify even with this extended set of primers, an alternate forward primer, spa T3-F: 5′-CAACGCAATGGTTTCATCCA-3′ binding upstream from 1095 F was used together with standard reverse primer 1517R. Primer spaT3-F binds to a part of sequence encoding an IgG-binding domain of the spa-gene that is repeated five times in the gene. Due to presence of multiple binding sites for the spaT3-F primer within spa-gene, only the reverse primer (1517R) was used for sequencing [10].

The genus Staphylococcus includes several pathogenic organisms among which Staphylococcus aureus is one of the most important. The pathogenesis of staphylococcal infections is a multifactorial process that depends on expression of different virulence factors. Expression of these factors is controlled by multiple regulatory systems in conjunction with environmental signals. Most of the genetic studies in Staphylococcus aureus have been performed using different growth media, therefore, we examined the effects of different growth media on transcription of the selective target (e.g., hla, hlb, spa, sspA) and regulatory (e.g., agr, sarA family) genes. 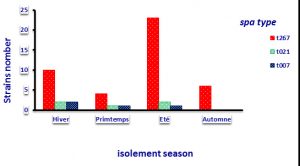 Fig. 1. Results of different types divided according to the spa isolation season during the study 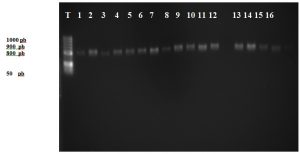 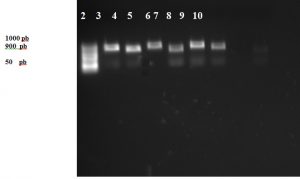 The prevalence of spa-type (t267) which represents(82.69%) for the selection of S. aureus strains identified in these results are the same as obtained in America by Haran and his collaborators in 2011.

Typing protein A which showed that the strains from all dairy farms included in the study are much closed. Much of theses strains have the kind t267 (82.99%), but five t021 (9.61%) and the other four strains (7.69%) t007whichwere positive to the presence of the gene for the toxin (TSST) by detecting the toxins by real-time PCR Step One. The results obtained are comparable to those shown in the study of [14].Type distribution spa of Staphylococcus aureus strains revealed a diversity of strains of three to two types in each studied herd, as in farms F2, F3 presence of three types of strains against farms F4, F5 two types of strains of Staphylococcus aureus and one type of strain was isolated in the F6 farm.

The results of identification by MLST selected S. aureus strains shows that the strains are match able to one clonal complexand ST1: 3 with CC30 identified ST243, 39 and 2598, these strains have a derived from T021 characteristic ST30 according to the MLST database. ST97 associated with spa-type t267. The ST97 is far from being associated with theCC3O.

Some strains do not belong to ST30 frequently found in humans in Algeria, and in relation to type the ST97 strains are of bovine origin. This study is the first molecular characterization study of animal strains of S. aureus isolated in the region of Oran.

The ST-398 MRSA found in Dutch pigs has been shown not to produce the PVL toxin, but 9% of the ST-398 MRSA bacteria in humans in the Netherlands were found to have the PVL-genes. This suggests that ST-398 MRSA in pigs could still acquire this trait, or it may even suggest that some of the ST-398 MRSA bacteria in cattle or chickens are already PVL MRSA. In Korea, however, 14 MRSA samples collected from cattle over a number of years and from different regions all had the PVL gene. This particular PVL strain is believed to have developed in cattle rather than to have been acquired from humans and Ashok Srinivasan [1].

Molecular typing methods are vital for the rapid identification of prevalent strains, which is important for active surveillance and to control the spread of disease. The polymorphic region of the gene encoding staphylococcal protein A (spa) has been found to be highly discriminatory and is useful for investigating both the local and global epidemiology of S. aureus.