Escherichia coli are commonly found in the gastrointestinal tract of humans and other warm-blooded organisms. Since E. coli can be discharge through deposition of fecal material, it has become habituated to soil and water in the environment. Hence the present study was undertaken to isolate and identify E. coli from various environments (viz., cattle waste, piggery, poultry and sewage water) and to determine their antibiogram patterns to different group of antimicrobial agents. A total of 120 samples comprising cattle wastes (30), poultry droppings (30), piggery (30), sewage water/sediment (30) were collected from the Dakshina Kannada and analyzed for the presence of E. coli. Of total samples screened, 82 (68.3%) were found to be positive to E. coli and among the 82 E. coli strains, 25 were isolated from cattle wastes, 18 from piggery, 13 from poultry and 26 from sewage samples. The antibiogram pattern of these strains showed varied multi-drug resistance profile to the selected antibiotics. Of 82 strains, 19 (23.2%) were susceptible to all the antibiotics and 63 were resistant to at least one of the drug tested. The results from present study revealed the higher relative resistance pattern to the tested antibiotic among E. coli suggesting their potentiality in transferring MDR thereby posing public health concerns in treating problems.

Antibiotics are widely used in treating infections of bacterial origin. They were predominant in treating diseases in the mid of 20th and early 21st century. Extensive use of antibiotics as medications has exerted selective pressure on vulnerable bacteria, favoring the survival of resistant bacteria1-3. These bacteria tend to take up resistance to varied antibiotics there by becomes multiple drug resistant (MDR). Infections caused by MDR bacteria are at raise posing a real threat in treating these populations. Incidence of antimicrobial resistance (AMR) is a major concern in terms of public health issue globally4. However abrupt usage of them lead to the emergence and spread of antibiotic resistance in the pathogenic organisms. The rapid emergence of antibiotic resistant bacterial strains and lack of new antibiotics to treat diseases resulted in increase in death specially in intensive care units. Thus, AMR has become a universal health threat and is a global issue. Among the food production sector, the poultry birds contribute to about 90 billion tons of meat production globally5.  Due to the rapid manifestation of diseases in poultry and livestock animal there arose the question of food security. Hence usage of antibiotics has become popular in treating infections in poultry birds as well as live stocks6. Their usage in terms of growth supplements in livestock specially in farmed animals has been one of the contributing source of AMR, which are evident in various reports on isolation of MDR bacteria from livestock populations across the globe7. The global food trade is one of the leading cause of spread and colonization of resistant bacteria globally. The massive use of antibiotics in treating diseases in humans and animals has resulted in the accumulation of antibiotic compounds in the environment leading to the emergence and uptake of antibiotic resistance6. Entry of antibiotic compounds into the environment – waterbodies could be traced out from effluent discharges from hospitals and community wastes which in turn becomes the reservoir hub harboring pathogeneous resistant microorganisms7.

Study design
In this study, two taluks of Dakshina Kannada district i.e., Belthangady and Mangalore of Karnataka were selected for regular sample collection. The samples (sewage water/sediment, poultry droppings, piggery and cattle wastes) were aseptically collected and brought to the laboratory for analysis. A total of 120 samples were collected from different sources – comprising 30 each from cattle wastes, poultry droppings, piggery and sewage water/sediment.

Detection of antibiotic resistance genes and integrons by PCR
E. coli isolate resistant to specific antibiotic was selected and tested for presence of genetic determinants responsible for resistance to particular antibiotics. Genomic DNA was extracted from the E. coli culture by CTAB (Cetyl-trimethyl ammonium bromide) method10 and used for detection of integrons and antibiotic resistance genes. PCR was carried out in 30 µl reaction mixture containing10X buffer (100mM of Tris- HCl, pH 8.3, 20mM 0f MgCl2, 500mM of KCL and 0.1% gelatin) 200mM of deoxyribonucleotide triphosphate (dATP, dTTP, dGTP and dCTP), 10 picomoles of each primer and 1 U of Taq polymerase (Bangalore Genei, Bangalore), with 2 µl of template DNA. Amplification was carried out in a MJ-Research Thermo Cycler (PTC-200, Bio-Rad) with optimized PCR programme consisted of an initial denaturation at 94°C for 5 min followed by 30 cycles with each cycle consisting of 94°C for 30 sec, Tm (annealing temperature) for 30 sec and extension for 72° C for 30 sec. The final extension was performed at 72°C for 10 min and the amplified products were resolved by 1.5 % (w/v) agarose gel electrophoresis. Different primer pairs were used for the amplification of various antibiotic resistance genes in isolates resistant to tetracycline [tetA, tetB, tetC, tetD, tetE, tetG, tetL, tetM and tetS] 11, chloramphenicol [cat1, cat2, cat3, cmlA, cmlB and floR] 11, sulphanamides [sul1, sul2 and sul3] 11, quinolones [qnrA, qnrB and qnrS] 12, ampicillin [blaTEM] and cefotaxime [blaCTXM] 11.

Multi-drug resistant E. coli strains isolated in the study were selected and examined for the presence of class 1 integron in their plasmid DNA. Plasmid was extracted by following the alkaline lysis method described by Sambrook et al. 13 and class1 integron was amplified using specific primers (Table 1) by single step polymerase chain reaction (PCR).

Isolation and identification of bacterial strains
A total of 82 (68.3%) biochemically identified E. coli strains were isolated from 120 different samples (Table 2) and confirmed by amplifying 146 bp product of uidA gene with single step polymerase chain reaction (Figure 1). The incidence of E. coli from sewage was highest 86.6%  followed by cattle waste-83.3%, piggery-60.0% and poultry-43.3%. 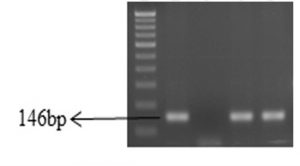 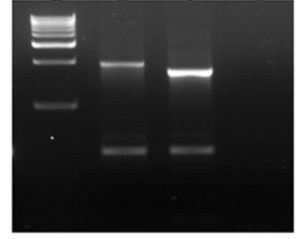 Multi-drug resistant (MDR) isolates (resistant to more than 2 antimicrobials) were screened for the presence of integrons in their plasmid using specific primers (25). Of 24 MDR isolates, 11 isolates showed positive for class 1 integrons by amplifying products of 1610 or 1859 bp (Figure 2), in addition  lower size amplicon (500 bp) was observed.

In the present study, one hundred and twenty samples from different sources (sewage water/sediment, poultry droppings, piggery and cattle wastes) were screened for E. coli. Of 120 samples 82 strains were isolated, identified as E. coli by conventional methods and confirmed by molecular tools (PCR). Of 82 E. coli strains, 19 (23.17%) were susceptible to all the drug tested and 63 (76.83%) showed resistance to minimum one of the antibiotics tested in the study.

Environments are the major harbor of antibiotic-resistant microorganisms. The emergence of antibiotic resistance in microflora of food producing animals are of great concern due to the risk of getting entry into the food chain17-19. In this study, genetic determinants for antibiotic resistance were identified using molecular methods like PCR and this provided important evidences for horizontal transmission. To determine the resistance profile of the isolated strains, we selected different groups of antibiotics like ampicillin, nitrofurantoin, tetracycline, cefotaxime, nalidixic acid, ciprofloxacin, co-trimoxazole, meropenem, imipenem, chloramphenicol, gentamicin, piperacillin-tazobactum20.

Tetracyclines are the widely used therapeutic agents in human, veterinary medicines and also used in agriculture as growth promoter. In the present study, 41.4% (34/82) of isolates exhibited phenotypic resistance to tetracycline. Among the isolates from poultry practices, 8 of 13, piggery- 7 of 18, cattle wastes- 3 of 25 and sewage- 16 of 26 showed resistance to tetracycline. Earlier reports have shown that tetracycline resistant (TCr) isolates harbor genes via. tetA, B, C, D, E, G, H, L which code for efflux proteins, tetM, O, S, W which code for ribosomal protection protein (RPP), tetX which brings about enzymatic inactivation and tetU whose function is still unknown21. Of 34 tetracycline resistant isolates, seven strains harbored more than one resistance gene (1- tetA & tetD, 1- tetA, tetC & tetS, 2- tetC & tetE, 2- tetC & tetS and 1- tetC, tetD & tetE), 4 carried tetA gene and 1 carried tetB gene. Although leftover twenty two isolates were phenotypically resistant to tetracycline, none of them carried any of the resistant genes tested. This suggests that there may be a possibility of other mechanisms like enzymatic inactivation or target modification that results in resistance to tetracycline22. The tetA and tetB genes are the most common genes responsible for resistance to tetracycline and the results of this study corroborate their observation. However, the mechanisms in those isolates that did not harbour any resistance genes needs to be elucidated to be able to understand resistance transfer.

Co-trimoxazole is a compound drug which consists trimethoprim and sulfamethoxazole at 1:5 proportion and widely used to treat wide range of pathogenic bacterial infections in both humans and animals. Total 18 (21.9%) isolates showed resistant to co-trimoxazole; of which 7 of 26 from sewage, 8 of 13 from poultry, 2 of 12 from piggery and 1 of 25 from cattle wastes were phenotypically resistant. Of 18 isolates resistant to co-trimoxazole, eight isolates harbored resistant gene tested (two- Sul1, one- Sul2, two- Sul3, two- Sul1 & Sul3 and one- Sul1, Sul2 & Sul3) and other 10 isolates did not harbored any of the tested genes. Of 46 ampicillin resistant isolates, only 2 possessed blaTEM gene and of 31 cefotaxime resistant isolates, none of them harbored blaCTX-M gene. Of total 35 quinolones resistant isolates (16- nalidixic acid resistant, 11- ciprofloxacin resistant and 8 both resistant), only one isolate harbored qnrB gene. Most of the isolates (46) showed resistance to ampicillin this result were synchronized with the works of Akinbowale et al. 23 and Boujamaa24. Although 46 isolates showed resistance to ampicillin, only 2 possessed blaTEM genes, suggesting that there could be other factors contributing to resistance mechanism.

Many research findings have shown that class1 integrons were broadly distributed in many Gram negative bacterial strains from human and animals and are major site-specific recombination mechanism25,26. All the MDR isolates obtained in this study were screened for the presence of integron in that 11 isolates showed positive for class 1 integrons. Yu et al 27 reported that the occurrence of class1 integrons was strongly accompanied by resistance to various antibiotics. Further study is required to identify the genetic elements of most of the MDR isolates which is the contributing factor to uptake resistance to antimicrobials.