Optimization of culture medium is a critical step in the development of fermentation process since it may affect the physiological behavior of the microorganism during growth and consequently control its productivity1. In general, the overproduction of a particular metabolite is affected by different fermentation parameters and perhaps the most important one is the carbon source. The type and amount of carbon source and the ability of microorganism to assimilate it effectively are the main determinants of microbial nature and its metabolic activity2. Thus, during the optimization of carbon source, it must be considered that a minimal growth requirement of the microorganism should be achieved for gaining maximum production of a particular metabolites. Therefore, in order to improve the microbial productivity of secondary metabolites, researchers optimized the type and concentration of carbon source and found that carbon source requirements were varying from strain to strain and from product to product3.

On the other hand, most research to date has tended to focus on using one carbon source in the fermentation medium rather than mixture. Although this may be feasible in terms of economics, but certainly does not display the full capacity of the microorganism in terms of metabolites production. As it is well known, the use of more than carbon source in the medium is usually accompanied with a phenomenon of carbon catabolite repression (CCR) in particular when the medium contains mixtures of rapidly and slowly used carbon sources4. In such a case, microorganism tend to consume the simplest one for example glucose and then turned to the second-best carbon source that usually associates temporally with the onset of secondary metabolites production and this normally correlate with growth cessation5. In general, for many microorganisms such as actinomycetes, monosaccharide for instance glucose is an ideal carbon source that effects global repression of secondary metabolites production. For that reason,, in industrial fermentations polysaccharides (e.g., sucrose and starch), oligosaccharides (e.g., lactose) and oils are generally used6.

For designing a production medium with most suitable carbon source, both classical and statistical strategies were used. The classical optimization is usually described as an expensive method with time consuming as it involves plenty of experiments. However, with modern mathematical/statistical techniques, optimization process has become more effective and efficient in giving the results7. In fact, the statistical method is a powerful tool for the optimization process which is basically based on finding the significant variables from large sets of variables through a set of planned experiments. It involves changing more than one component at a time instead of changing only one-factor. Therefore, the statistical method which is also called design of experiment can be more efficient because all the limitations of classical methods can be overcome7,8. In this work, a mixture design which is a special class of response surface methodology was used to evaluate the influence of ten carbon sources separately and as a mixture of two carbon sources on the production of undecylprodigiosin and actinorhodin from Streptomyces coelicolor.

Microorganism
MT1110 strain of Streptomyces coelicolor A3 (2) was used throughout this work which originally derived from the wild type strain 1147 (20). This strain was kindly provided by Professor Ferda Mavituna /The University of Manchester in UK. Streptomyces coelicolor was grown on MS agar slant at 30 C for 10-14 days. 5 ml of sterile distilled water was added to the slant to collect spores by scraping the growth gently with loop and then the obtained water was centrifuged at 8000 rpm for 15 min. Next, the collected spores were washed and re-suspend in 1ml of sterile distilled water which then counted using a haemocytometer.

In all experiments, spore inoculum was used which was kept to be approximately contain 1×109 spores/mL. 500 microliter of this spore suspension was used to inoculate 100 ml defined liquid medium which then incubated in an orbital shaker at 30°C and agitated at 200 rpm.

Carbon source optimization using mixture design
Ten carbon sources (glucose, sucrose, fructose, mannose, glycerol, mannitol, lactose, starch, maltose, methyl cellulose) were used and tested in terms of supporting production of undecylprodigiosin and actinorhodin. A statistical method using response surface methodology (RSM) was used to optimize undecylprodigiosin and actinorhodin production using mixture design. The effect of each variable and their interaction as well as the statistical analysis were investigated in order to obtain the predicted production of each pigment.

Analytical method
Actinorhodin was extracted from Streptomyces coelicolor culture by adding an equal volume of 2 N NaOH and then pH was adjusted to 12. The mixture was mixed vigorously for at least three hours. Thereafter, the absorbance of the supernatant was measured at 640 nm after removing the cell debris and actinorhodin concentration was determined using the specific extinction coefficient E (1 %, 1 cm) = 35510.

Undecylprodigiosin was calculated based on the method described by Kang, et al.11. Undecylprodigiosin was first extracted by adding an equal volume of methanol to the cell pellets collected from a known volume of the Streptomyces coelicolor growth culture. Then, the mixture was mixed vigorously for at least 3 hours. Next, after removing cell debris, the absorbance of the supernatant was determined at 530 nm. Molar extinction coefficient (E 530 =100150 M-1 cm-1) was used to calculate the concentration of undecylprodigiosin.

A carbon source is essential to provide the cell with materials necessary for most biological reactions leading to growth, provide energy source as well as product formation. Basically, they have a major effect on the expression of biosynthetic genes in microorganisms and therefore, selection of a good and adequate carbon source is vital and required to support production of a particular metabolite. In our work, a chemically defined medium was used which initially designed in 1982 by Roth and Noack and next developed by Hobbs and co-workers9 for studying the physiology of the genus Streptomyces with glucose as a sole carbon source. Preliminary results showed that the blue pigmented actinorhodin was mainly produced in this medium with maximum concentration of 64.2 mg/L after seven days of incubation. Whereas, 11.6 mg/L was the maximum production of the red pigment undecylprodigiosin obtained at the fifth day of incubation (Figure 1). Fig. 1. Production of undecylprodigiosin and actinorhodin by Streptomyces coelicolor in Hobbs’s medium.

In this work a mixture design was used to evaluate the influence of ten different carbon sources, separately or as a mixture, on the production of both actinorhodin and undecylprodigiosin from Streptomyces coelicolor. In the experimental design, each carbon source was used in two limits: zero (lower limits) and 10 g/L (upper limit). We imposed the constraints to be exactly nine factors omitted in vertex point, eight factors omitted in center edge and no component omitted in the axial CB and center point. 67 runs were generated and randomized by the software program (DESIGN EXPERT 7) based on simplex lattice method as shown in Table (1). This table illustrates both the actual and predicted values of the two responses: undecylprodigiosin and actinorhodin which approximately were closed to each other. As can be seen from the table, production of undecylprodigiosin was significantly increased in cultures contain glycerol, mannose, mannitol and sucrose. Undecylprodigiosin is belongs to a group of polypyrrole bioactive compounds called prodiginines which also involved prodigiosin produced by Serratia spp12. Most prodiginines compounds are chemically similar and almost have similar biosynthetic pathways. In reviewing the literature, we can find that sucrose13,14 glycerol15, mannose and mannitol16 were appropriate carbon sources that can support maximum production of prodigiosin. Moreover, many studies mentioned that prodigiosin production was decreased or even inhibited in the presence of glucose as a sole carbon source however, the basis for this phenomenon is incompletely understood so far17,18. The present findings seem to be consistent with previous research as production of undecylprodigiosin was poor in the presence of glucose.

Table (1):
Experimental design for actinorhodin and undecylprodigiosin production along with actual and predicted response for ten carbon sources.

The analysis of variance, ANOVA, of mixture design for undecylprodigiosin production is presented in Table (2) which shows that the lack of fit of the regression model is significant and fisher F test demonstrate high significant (P< 0.05) for the regression. The fineness of the model is evaluated using determination coefficient R2. In this case the determination coefficient (R2 =0.737) indicate that 26.4% of the total variation is not explained by the model. The adequate precision used to measure signal to noise, is supposed to be required greater than 4. In this case, the value of 20.3 revealed that the empirical model is of an adequate signal and can be used to navigate the design space. The adjusted and predicted coefficients of this model are 0.695 and 0.647, respectively.

Table (2):
Analysis of variance (ANOVA) of undecylprodigiosin production based on mixturedesign.

The experimental design from simplex lattic was fitted and can be explained in first order polynomial equation (1). The correlation is described by the ‘correlation coefficient’, a dimensionless descriptor, in which mixture design model is explained by L-pseudo component for undecylprodigiosin production19.

On the other hand, the analysis of variance, ANOVA, of mixture design for actinorhodin production revealed that the lack of fit of the regression model is also significant and fisher F test shows high significant (P< 0.05) for regression (Table 3). In addition, evaluation of fineness of the model revealed that 21.1% of the total variation is not explained by the model based on the value of determination coefficient R2 (0.789). Furthermore, the adequate precision used to measure signal to noise, is greater than 4 and the value of 21.8 revealed that the empirical model is of an adequate signal and can be used to navigate the design space. The adjusted and predicted coefficients of the model are 0.7566 and 0.6891, respectively. Moreover, the experimental design from simplex lattic is fitted and can be explained in first order polynomial equation (2).

In addition to correlation, regression analysis can be used to assess the best fit of a line using the equation y = b0 + b1x. The ideal line of best fit would have the sum of the squares of the distances from x to the line of fit as small as possible. The diagnostic of normal residual demonstrated in Figure (2) for the production of both undecylprodigiosin and actinorhodin indicated that the residual behavior has followed normal distribution and was quadratic, which is the more important assumption for checking statistical modeling.

Fig. 2. Normal probability plot of standarized residual of linear L-pseudo model based on mixture simplex latic model for undecylprodigiosin and actinorhodin production by Streptomyces coelicolor A3(2). 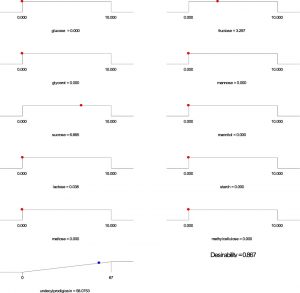 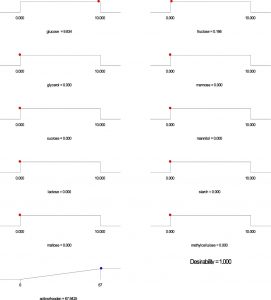 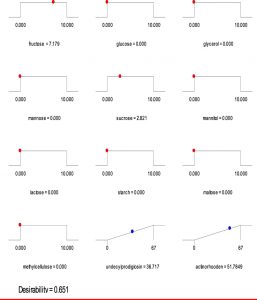 Fig. 5. Ramp chart for statistically optimize carbone source for  both undecylprodigiosin and actinorhodin production by Streptomyces coelicolor A(3)2 Fig. 7. Quadratic contour area ternary plots of three carbon sources and their effect on the production of actinorhodin and undecylprodigiosin by Streptomyces coelicolor.

In conclusion, this work has explained that glucose, fructose and sucrose are the most carbon sources among the carbon sources used in this work that affect production of undecylprodigiosin and actinorhodin from Streptomyces coelicolor. Our result showed that using sucrose and fructose can increase undecylprodigiosin instead of actinorhodin which can be increased to the maximum when glucose is used as a carbon source. The results from this study make several contributions to the current literature on using mixture design as a first step for detecting the most suitable nutritional component to enhance a particular metabolite. In addition, our findings have gone some way towards enhancing our understanding of the role that a carbon source may play in the production of two metabolites produce simultaneously. Furthermore, the finding of this study supports previous research into use mixture of two carbon sources to stimulate the production of secondary metabolites as was observed in undecylprodigiosin production.

Conflict Of Interest
The author declare that there is no conflict of interest.