Cotton belongs to the family Malvaceae and produces a natural type of fibre that grows around the seeds of the cotton plant. World wide India and China are largest producers of the cotton and the economy of many farmers of these countries were depends on production of cotton. The cotton dependent textile industry of the India is one of the leading industries in the world and the Indian government earns a lot of foreign exchange through this. Economic Survey of India shows that 16% of total world production of cotton was supplied by India1.

In 1904 Hiltner first time coined a term rhizosphere which later modified by Hartmann et al. (2008) as the area around a plant root that is inhabited by microorganisms and have 3 zones as endorhizosphere, rhizoplane and ectorhizosphere. Roots released secretory and diffusive substances plays an important role in propagation of roots, soil adhering and different rhizospheric interactions respectively2. Some microorganisms are capable to colonize rhizosphere and shows different types of interactions as pathogenic and beneficial interaction. The beneficial interaction of bacteria involves plant growth promoting rhizobacteria (PGPR) which can colonize roots in competitive environment and shows beneficial effect on plant growth3.In pathogens attacks plants will recruits the protective microorganisms and enhance the activity of metabolites for suppression of plant pathogens in rhizosphere4. There are various ways like production of antibiotics, induction of systematic resistance, production of various enzymes and peptides through which some bacterial species can show bio control activity. The high microbial diversity, density, metabolic activity, way of introduction of inoculums, some abiotic factors and competition occurring in the rhizosphere environment represents biological buffering that generally limits the establishment of new microorganism into the rhizosphere for root colonization6,7,8. Pseudomonas is a highly diverse species among all the available bacterial species. It is not that it has much special molecular machinery adopt in given niche but it is that just simple mutation in regulatory pathways that affect the expression of surface polymer and it may be spatial or temporal9. The current work is just an attempt to look inside the metabolic diversity of isolates and its application over plant growth promotion.

Sampling, isolation and identification of bacteria
Roots were collected from cotton plants growing in the mono cultivated 3 fields of Maharashtra (77.319717- 19.169815) India. The soil adhering with roots were collected, packed and transported up to laboratory in UV sterilized plastic bag. The root adhered soil sample was used for physicochemical analysis and bacterial isolation purpose. (Table 1)

Serial dilutions of soil samples were carried in sterile saline and (10-3) dilution was streaked on the edge of PDA plates and incubated at 30°C for 24 hours. A 9 mm plug of Fusarium oxysporium and Aspergillus niger was taken from the 72 hours grown PDA plate and placed at the centre of previous plate. Plates were incubated at 30°C for 6 days. The bacterial culture that inhibits the fungal growth was isolated10.The morphologically similar colonies were selected and purified by repeated streaking 11,12.

The selected isolates were turn into metabolically active by maintaining its optical density 0.5 at 620 nm, and then screened for biochemical tests, production of hydrolytic enzymes and plant growth promotion activities. The characterizations of isolates were carried out.

The screening and confirmation of siderophore was carried out over universal CAS medium. The isolates shows holo orange colour zone surrounding them was used for production and siderophore concentration was determined13.

Detection of Silver nanoparticles
The screening of silver nanoparticles producers were carried out according to the method of Jo Young-ki et al., (2009) with slight modification. The isolates were inoculated in king’s B medium and incubated at 150 rpm, 37°C for 48 hours followed by centrifugation at 8000 rpm for 10 minutes. The 1 ml supernatant was added in 1 ml (1mM) Silver nitrate (AgNO3) solution and incubated at 30°C for 24 hours for change in color from yellow to brown. The lambda max was observed at 420 nm. The vacuum dried sample was analyzed for SEM analysis14.

Determination of IAA Production
Isolates were screened for Indole Acetic Acid production, grown on Tryptic soy broth (1% Extra supplemented Tryptophan) incubated at 30°C for 72 Hrs15.After incubation, medium (5 ml) was centrifuged at 7000 rpm for 5 min and supernatant was used for IAA detection16. The isolates which give cherry red color after addition of Salkowaski reagent were used for IAA production.

For IAA production 1% extra Tryptophan supplemented tryptic soya broth was used. The inoculums were prepared and inoculated flasks were incubated at 30°C for 72 Hrs. followed by its estimation as per the method suggested by Gordon and Weber (1950). The confirmation of Indole Acetic acid was carried out by HPLC method17. (Fig. 1) 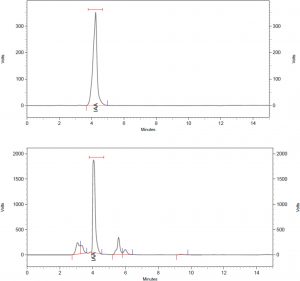 Test for Phosphate Solubilization
Isolates were screened for their Phosphate solubilising activity. The isolates were grown on Pikovaskaya’s agar, incubated at 30°C for 120 hrs. The isolate which shows clear zone around them were further used for quantitative assay18.

For production Pikovaskaya’s medium was prepared with 5% Tri-calcium phosphate addition, incubate at 30°C, 120 rpm for 336 hrs. After incubation the medium was filtered through Whatmann’s filter paper no.1. and the supernatant was used for the assay purpose. Phosphate solubilization assay was carried out as per King method (1932).

Antifungal activity
The effect of isolate on fungi was carried out by dual culture method.

Microcosm assay
The potential isolate combinations for microcosm assay were prepared. In microcosm the surface sterilized Bt cotton seeds were used19 and assay was carried out by two methods.

Effect of metabolites on germination of cotton seeds
The metabolites produced by isolates were partially purified by centrifugation process. After the centrifugation the supernatant with estimated concentrations were used for pot assay purpose. Approximately 2 ml of metabolite was added in every pot with different combinations.

Effect of metabolite producer
The metabolites producing isolates were enriched in King’s B broth at 30°C for 24 hours for 0.5 OD at 600 nm. The tested fungi enriched in Potato Dextrose broth at 30°C for 48 hours for 108 spores/ml concentration. The 10 ml of fungal spore suspension and 10 ml of bacterial suspension was mixed in sterilized flask with various combinations and 3 seeds were allowed to soak within it for 10-12 hrs. After the incubation the seeds were air dried and sown in 250 gm of soil. The seeds were observed initially for germination and after 20 days analyzed for root, shoot length and dry mass of plant.

In control non-inoculated seeds were used.

PCR reaction for 16S rRNA sequencing
The isolation of genomic material of potential isolates was carried out and the amplification of 16S rRNA gene was performed by using the universal bacterial primers 27F and 1492R. The genes were sequenced on ABI Prism and BLAST was performed for construction of phylogeny using MEGA 6 software.

Isolation and identification of bacteria
A primary selection for the antagonism test plates helps for detection of bacteria. Pure bacterial cultures isolated for those isolates were screened for production of different metabolites as mentioned in material and methods. The 40 isolates were rescreened for morphological characterization and only 5 Gram –ve, rod shaped; motile bacteria were selected and studied for 16S rRNA sequencing. A morphological, biochemical and molecular characterization of isolates allow the identification as Pseudomonas group. (Table 2 & 3). Plant growth promoting activity
95% of isolates were capable to produce IAA within a range of 13 – 70 µg/ml. The isolates AJ D 2 and AJ D 3 were highest (70 µg/ml) producers. Produced IAA was initially identified by TLC and confirmed by HPLC. 90% isolates were capable to solubilised phosphorus, among them an isolate AJ A 2 shows highest (13.35 mg/lit) solubilisation activity. Phosphate solubilisation efficiency of isolated pseudomonas was found to be higher as compared to Bacillus species23.

Table (5):
Effect of metabolite, isolates and fungi on germination of cotton seeds. The every combinatory activity was evaluated in triplicates and correlated for correlation coefficient(r) analysis. The r value comes positive and near to 1, fortify the data. The goal of this study is just to find out the direct plant growth promoting diversity of culturable Pseudomonas species and find out role of silver nano particle as a tool in plant growth promotion.