This study is aimed at isolating and characterizing strains of an actinomycetes from soils. Six strains of actinomycetes were isolated from the riverside, rhizoplane and low land of Muzaffarpur district of Bihar (India). The cultural characterisation revealed the production of diffusible pigments of different colours. Heavy sporulation was noticed in some strains. Out of six strains isolated, four strains such as KS-1, KS-2, KS-3 and KS-4 were found to be mesophilic, and the other two KS-5 and KS-6 showed thermophilic when subjected to a higher temperature. The antibiotic susceptibilities of these six strains gave the idea about the sensitive and resistance nature based on the zone of inhibition against six antibiotics. Three strains (KS-1, KS-3 and KS-5) were found to be sensitive, whereas KS-2, KS-4 and KS-6 exhibited resistance to the particular antibiotic. The antibiogram of these strains such as KS-2, KS-4 and KS-6 clearly showed the different levels of resistance such as constitutive resistance, lethal dose50 and minimal inhibitory concentration within the susceptible range of different antibiotics.  CR was found to be maximum (3.5 µgmL-1) in strain KS-4 against tetracycline, the highest lethal dose (14µgmL-1) was noticed in KS-2 against ampicillin while Minimal Inhibitory concentration was found to be maximum (26µgmL-1) against streptomycin in strain KS-6.

Actinomycetes are filamentous Gram-positive bacteria with high G+C content and are the most widely distributed group of microorganisms in nature which primarily inhabit the soil. The morphology of an actinomycete growing on agar media can provide useful and rapid clues to its identity, but viewing isolated colonies can give little worthwhile information. Morphological characters are still widely used for characterizing genera, for example, the presence or absence of spores on the substrate mycelium or pigment production. The ability to produce motile spores is more widespread in the actinomycetes.

In this study, the morphological and antimicrobial characteristics of these strains have been described. The objective of the present investigation was to screen soil samples collected from different localities of Muzaffarpur showing large, diverse and largely unscreened ecosystems for isolation of potent and useful actinomycetes and to ascertain the different levels of resistance against antibiotics.

The soil is the most favorable place for the microbial population, especially the actinomycetes. The soil samples were collected from the riverside, rhizoplane of herbaceous plants and low land of Muzaffarpur district of Bihar by digging the soil upto 6-8 inches below the surface. These samples were taken during all seasons. The samples were stored into sterilized polythene bags and taken to the laboratory of University Department of Botany, Muzaffarpur, India (26.1197° N, 85.3910° E) for further processing. The strains were grown to different media and later exposed for their identification. The strains were later subcultured in both complete and minimal media. Thus isolated strains were purified on selective media for further investigation 7(Table-1).

Table (1):
Isolation of Actinomycete strains from soil of three sites.

Composition of media
Several solid and liquid media were used for isolating the strains of an actinomycetes from different sources. The pH of the medium was adjusted between 6.8 and 7.2 either by adding 1N NaOH or 1N HCl. Then the medium was subjected to autoclaving at 121°C for 15 min. Six different media were used for the isolation of actinomycetes strains (Fig.4 and 5).

Normal saline
Normal saline was prepared by dissolving 8.7g of NaCl in one litre of distilled water. A drop of Tween-80 was poured into it. It was then distributed in 15 mL vial containing 10 mL of normal saline and then subjected to autoclaving for sterilization.

Serial dilution
A known amount (10 g) of soil was suspended or agitated in a known volume of sterile water blank (9 mL or so to make the total volume of 10 mL) to make a microbial suspension. Serial dilutions, 102…….105 were made by pipetting measured volumes (usually 1mL) into additional dilution blanks having 9 mL sterile water. Finally, 0.2 mL aliquot of various dilutions was added to sterile Petri plates containing 15 mL of sterile cooled and solid media. These plates were then subjected to incubation at a desirable temperature. The colonies appearing on dilution plates were counted, averaged and multiplied by the dilution factor to find the number of cells/spores per gram of the sample (Fig. 1, 2 and 3). Cultural conditions
The six isolates were characterized according to International Streptomyces Procedure (ISP). The colors of mycelia and soluble pigment after growing on different media were observed by the naked eyes as well as the magnifying lens. To study the mycelia and its sporulation characteristics, the direct method and inclined coverslip method were used8(Table 2).

Auxanography
Thick spore suspensions from the desired strains were mixed with cooled (45-50 °C) molten medium and then poured into sterilized Petri plates. The discs containing the different amounts of antibiotics such as ampicillin, gentamicin, kanamycin, rifampicin, streptomycin and tetracycline were placed at the specified marked position of the plates and then subjected to incubation for 48 h at 37°C. The zone of inhibition of these different antibiotics could thus be measured. 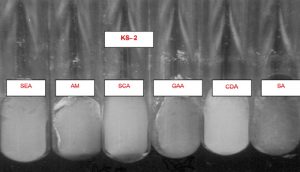 The susceptibility test was done by serial dilution method. One mL of inoculum having 104 spores in mL suspension was added to each of the test tubes containing 8 mL of sterile SCA broth. Several dilutions of drugs were prepared, and 1mLof each was added to each of the tubes to get an increasing concentration of antimicrobial agents. The test tubes were incubated at 37± 2 °C and observed after 72 h. Each tube was screened after 72 h and the lowest dilution of the drug without any growth of the organism was recorded as MIC. A graph was prepared for the percentage of the bacterial population against the different concentrations of antibacterial agents and thus 50% of the growth of strains was extrapolated from the graph. This was known as LD50 of the chemical against the strain.

Statistical analysis
All the data’s were statistically analyzed and represented means of three replicates of each factor and all the bars denoted the standard error.

In this study, only six different actinomycetes isolates were obtained based on cultural characteristics. Several media were screened to grow luxuriantly and observe mycelia formation, pigment production and sporulation. Temperature is one of the important parameters for the growth of actinomycetes strains. Out of six strains, four (KS-1, KS-2, KS-3 and KS-4) grew on 37°C and were termed as mesophiles while a few of them (KS-5 and KS-6) thrived on 50°C when subjected to a higher temperature and were denoted as thermophiles 9 (Table 3).

The antibiogram of six strains such as KS-1, KS-2, KS-3, KS-4, KS-5 and KS-6, which were isolated from three different areas of soil, revealed the susceptibility of these organisms towards different antibiotics. The antibiotic resistance was not found to be uniform amongst the six strains. This suggests the acquisition of this resistance occurred early in the development of these strains. The low susceptibility of antibiotics could be due to the breakdown of a drug by factors present in the cell or due to defective uptake system10.

Table (4):
Antibiotics and their concentrations per filter paper disc.

Table (5):
Antibiotics and zone of inhibition of Actinomycete strains. Those strains of actinomycete which did not show growth demonstrated their sensitivity towards the metabolite secreted by actinomycetes, whereas those strains which showed growth exhibited their resistance towards the metabolite. In order to select the potent antibiotic cultures, the strains of actinomycete were cultivated in 100 mL Erlenmeyer flask containing 30 mL sterile starch-casein broth. The flask was incubated in a stationary position for 2-7 days at 30 +2°C. After incubation, the antibacterial activity of the culture was tested by agar cup plate method. The potency of the organism was measured by showing the degree of inhibition zone.11

All the isolated strains were screened for their resistance profiles to a battery of six antibiotics representing different groups depending upon their mode of action. A strain must be resistant to the antibiotic it produces and it has been shown that multiple resistant genes whose expression is not constitutive confer that resistance in order to fit a maximum to the physiological condition. The perusal established that these strains were found sensitive to most of the antibiotics; however, the level of sensitivity was different in different antibiotics12,13. Prolonged usage of antibiotics against microbial infections in inappropriate doses leads to the development of antibiotic resistance which is a recent concern of importance19.

The antibiotic resistance was found to be different on a solid medium than on a liquid medium. It is because the rate is always slower on the solid substrate than in liquid shake culture. That is why, the concentration of antibiotics required for either natural resistance (no inhibition) or 50 percent or total inhibition has been found to be more in liquid shake culture than those required for solid culture of Thermoactinomyces vulgaris where the level of antibiotic resistance in liquid medium were two to five times higher than those on solid medium14. Since the liquid shake cultures facilitate synchronous growth of mycelia, the accurate and convenient way to monitor the growth profile against antibiotics or curing agents continues to be through liquid culture15.

The present investigation was carried out to ascertain the different levels of resistance of antibiotics, i.e., the constitutive resistance (CR) at which there was no inhibition of growth of the strains, LD50 at which there was 50% inhibition of growth of the strain and minimal inhibitory concentration (MIC) at which there was complete inhibition of growth of the strains16. Minimum inhibitory concentration is important as it indicates as to what level of dilution can be achieved while still retaining the level of activity. The different types of antibiotics were selected for this purpose. The levels of resistance of the antibiotics such as ampicillin, gentamicin, kanamycin, streptomycin, rifampicin and tetracycline were examined against the isolates KS-2, KS-4 and KS-6 which were isolated from the soil of three different sites as mentioned in Material and Methods.

The level of antibiotic resistance for the strains KS-2, KS-4 and KS-6 was established by determining constitutive resistance (CR), lethal dose (LD) and Minimal Inhibitory Concentration (MIC) of the antibiotics such as ampicillin, gentamicin, kanamycin, rifampicin, streptomycin and tetracycline (Fig.8, 9 and10). 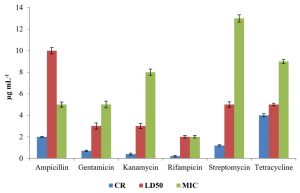 Fig. 8. Level of resistance against different antibiotics in strain KS-2 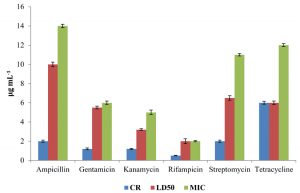 Fig. 9. Levels of resistance against antibiotics in strain KS-4 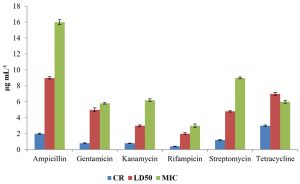 Fig. 10. Level of resistance against antibiotics in strain KS-6

The measure of the zone of inhibition was considered as an important parameter for preliminary screening17.The plates for suitable medium were streaked with the strains of actinomycete so that half of the plates were found to have grown with the strain within seven days. The rest part of plates was streaked with different bacterial strains, and such plates were subjected to incubation at 37°C within 24 h and observed.

ACKNOWLEDGMENTS
The authors fully acknowledge Council of Scientific and Industrial Research (CSIR) for the fund, which made this indispensable study possible. Authors are also grateful to Prof. Arvind Kumar Jha, Principal, MRM College, Darbhanga for his constant encouragement with respect to the publication of this article.

AVAILABILITY OF DATA
All data sets obtained or studied during this study are incorporated in the manuscript.