Fenitrothion – Organophosphate insecticide is a cheap and widely used Insecticide throughout worldwide since 1959 and play an important role in modern farming and food production. It is commonly used in Paddy, Cotton, Fruits and Vegetables for controlling beetles, borers, fruit flies, foliar-feeding larvae, nematodes. Fenitrothion is dangerous to all living ecosystem, Excessive exposure to Fenitrothion effect the brain and peripheral nervous system of humans. Fenitrothion is an Acetylcholinesterase inhibitor and Carcinogenic. Fenitrothion with complex structure has high persistence in ecosystem and biosphere. The target aim of this study is to eliminate FEN residues from contaminated sites specifically in Paddy soils with Fungi. Isolate the Fenitrothion degraded fungi by the Screening process and check the potential degradation levels in both solid & liquid media’s and here the potential isolate uses phosphate as an energy source, examine the fungi under the microscope. The Pure fungi are subject for Molecular characterization with 26S rDNA gene sequencing and phylogenetic analysis and identified as Aspergillus parasiticus.

Insecticides are substances or preparation used for killing insect pests, include ovicides and larvicides. Insecticides are commonly used in agriculture, industry, medicine.

Insecticides are pesticides that are formulated to kill, harm one or more species of insect. Insecticides effects insects in various ways that it disrupts the nervous system, may damage their exoskeletons, repel them. Insecticides commonly used as sprays, dusts, gels, baits.

A pesticide may be a chemical substance like Inorganic, Organic Pesticides, a Biological agent like Virus, Bacteria and Antimicrobial agents. Including Insecticides, Pesticides are grouped as Fungicides, Bactericides, Ovicides, Larvicides, Adulticides, Herbicides, Nematicides, Virucides, Molluscicides etc. Based on mode of action Pesticides are grouped as Fumigants, Stomach Poisons, Systemic Poisons, Contact Poisons etc.

Fenitrothion is flowable, It is available in different emulsifiable concentrations like 95%, 50%, the molecular formula is C9H12NO5PS, the chemical class is organophosphate/contact insecticide, the specific gravity is 1.3227; 1.32;1.34;1.3084 at 20degreed C.

Enrichment of Fenitrothion degrading fungi
From the Paddy fields of Pakala, Chittoor District, Andhra Pradesh with a continuous history of farming for more than 35 years the soil samples at the depth 0-16 cm was collected, transported to the laboratory in plastic bags, and stored at 4°C for further analysis.

By using an inoculum of Fenitrothion treated soil Fenitrothion degrading fungi were isolated by the enrichment culture technique, 10 g of soil sample was diluted and inoculated in 250 ml Erlenmeyer flasks with 100 ml potato dextrose broth at the temperature of 28°C for 24 h.

Flask without inoculums was also prepared for the biotic disappearance of the Fenitrothion and kept for incubation at 28°C for 24h.

Preparation of Pure culture
Spread plate method was chosen for isolation of Fungi pure culture. The enrichment culture of fenitrothion resistant fungi one loop full were spread on potato dextrose plates which are amended with fenitrothion, and incubate at 24-48h at 28°C. The different colonies were isolated and sub-cultured on potato dextrose plates at 37°C for fungi characterization.

Morphological characteristics of fungi
The morphological characters of the fungi strain degrade the fenitrothion were observed with already identified other strains, namely the colour of spores, mycelial colour, conidiosphore structure were observed microscopically, radial growth of the test organisms was observed. Molecular characterization has proceeded for identification of the isolated fungi.

Preperation of genomic DNA
Genomic DNA was isolated from 24 h old culture. The 100 µg of mycelium was measured into a 1.5- microfuge tube ground the mycelium in a mortar and pestle treated with liquid N2 5-6 times. The frozen powder was transferred to Eppendorf tube and 660-750 µl of was added and 10 µl of b- mercapor, vortex the mixture for few seconds and keep it for incubation at 650c for 1h by using water bath , later keep it for centrifugation at 3500 rpm for 5 minutes, collect the top aqueous layer in to a fresh Eppendorf tube and added 700 µl of chloroform, isopropanol (24:1) and adjust the volume to meet a 1:1ratio of aqueous phase, centrifuge at 12000 rpm for 10 minutes and followed by 70% 0.5 ml ethanol and centrifuge for about 5 minutes , collect the pellet and treated with 100 µl of TE buffer (PH-8). After further purification DNA was quantified by spectrophotometrically keep it for gel electrophoresis.

The complete work focused on the Isolation and characterization of the Fungi stains which shows resistance to Insecticide (Fenitrothion), to identify potential fungi for the fenitrothion bioaugmentation. Diverse colonies were observed, among them one fungus were selected because of their potential growth on fenitrothion amended Czapadex media.

Isolation of Fenitrothion resistant fungi
With enrichment culture technique 9 fungi were isolated, when these cultures were subject for potential degradation of fenitrothion with higher ppm concentrations like 300, 400 ppm only one fungus shows good degradation when compared to others. So one fungus was isolated. 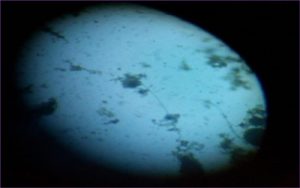 Genomic DNA extraction
When agarose gel was illuminated to UV light1 band of genomic DNA was identified, when compared with 1 Kb DNA marker. Lane one indicates the DNA marker and lane 2 indicates the fungi genomic DNA. The Isolated gene has intimated in Fig. 7. 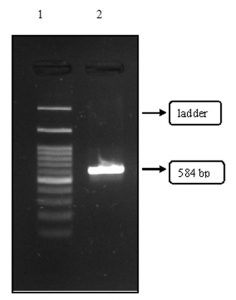 Organophosphorus Insecticides are useful because of their low cost, more effective against Insect Pests, but remains a major environmental contaminant, make clinical problems in humans and other organisms, make microbial imbalance of soil, The excessive pollution of the ecosystem has been formed by organophosphorus pesticides, which is used for fields in Agriculture. The present study, the fenitrothion degrading fungi were isolated by enrichment culture technique, enrichment cultures from the soil which utilize organophosphate as the major source for their growth. Sheela and Pai used enrichment culture technique for degradation of organophosphates.

Nine fungi colonies were isolated, basing on their active growth on fenitrothion amended media one fungi was selected for present work. Basing on their microscopic, Morphological appearance, Molecular characterization the Fungi was identified as Aspergillus parasiticus. When compare to other eight isolates the Aspergillus parasiticus degrade the Fenitrothion up to 400 ppm concentration, and also the degradation of fenitothion were also determined by Chromatorgaphic techniques like FTIR, GCMS, HPLC, which is discussed on my further articles, Organophosphourus hydrolase (OPH) has the ability of hydrolyzing organophosphorus pesticide.

Acknowledgements
We would like to thank the DST-CURIE, Co-ordinator and staff (Sri Padmavati Mahila Visvavidyalayam, Tirupati) for providing their lab facilities.