The COVID-19 caused by a new type of coronavirus has emerged from China and led to thousands of death globally. Despite the efforts engaged in studying this newly emerged virus and searching for its treatment, the understanding of the COVID-19 drug and target protein interactions still represent a key challenge. Several molecules have demonstrated In-Vitro activity against the SARS-CoV-2 virus and/or potential clinical benefit in observational and non-randomized studies. Randomized clinical trials of an appropriate size are currently ongoing to establish the efficacy of these therapeutic proposals. Herein, concerning these diverse guidelines and therapeutic suggestions of different approaches to the treatment, this research aims to provide a molecular analysis of the interaction between the principal molecules cited in bibliography and the active protease site of the virus.

In order to face the SARS-CoV-2 pandemic, several therapeutic protocols have been issued across the world, these proposals are based on the repositioning of drugs or on clinical trials being conducted in China as the country where this pandemic first emerged. However, given the lack of molecules that can selectively inhibit the virus, the use of this methodology remains the appropriate temporary solution.

To date, there is not yet a specific and effective antiviral agent against the SARS-CoV-2 available. Nevertheless, current research suggests that some treatments with appropriate viral restriction mechanisms may show promising results and approved methodological trials. The main protease of SARS CoV2 is a key protein that has an essential function in mediating viral replication and transcription. This enzyme is a prominent target for the development and the conception of antivirals against coronavirus infections.

The bibliographical screening for the lopinavir/ritonavir combination reports that clinical studies on SARS have been associated with reduced mortality and intubation rates, but their retrospective and observational nature precludes definitive findings1. Chloroquine or its hydrochloric derivative appears to be effective in preventing the replication of this virus; those molecules also play a particularly beneficial immunomodulatory function, which explains the implication of these molecules in the treatment of other autoimmune inflammatory diseases.

Other treatments were reported as therapeutic strategies against SARS Cov2 infections, notably Azythromycine2, oseltamivir, and lopinavir/ritonavir treatments were also adopted3-5 nitazoxanide, an antiviral against a broad range of viruses6 and Favipiravir7. In parallel and for a specific purpose, other molecules were used in this research, including molecules hypothesized to be involved in SARS CoV2 infections, the peptidomimetic AG7088, and drugs from the class of protease-targeting antivirals.

The objective of this research was to investigate the applicability of the SARS CoV2 main protease (ID: 6LU7) as a target protein for treatments by examining the binding and their affinities. Besides, this may provide insights into the current knowledge of the therapeutic efficacy of different pharmacological approaches.

The study selected the 3-chymotrypsin-like protease (3CL-protease) as a targeted enzyme, necessary for virus survival, which it’s role: the cleavage of polyproteins into replication-linked proteins. The 3CL-protease structure PDB ID: 6LU7 was obtained from the Protein Data Bank.

Referring to the literature data, we tested and analyzed the affinity of the recently reported pharmacological proposals. All the 3-D structures of these drugs were obtainable from the PubChem database. For the simulation of the binding affinity, and the structural visualization Molecular Operating Environment (Chemical Computing Group) had been employed.

The classification was based on the S score, permitting the assessment of the treatment and the active site of the protease affinities; meanwhile the Root Mean Square Deviation reference is used for the conformational analysis as well as the hydrophobic and polar interactions.

Table 1 presents the results of the molecules related to 3CL-protease. A part of these molecules is proposed and used. These scores were obtained from our modeling model and represent the relative binding affinity.

Table (1):
The docking score of molecules and the active site of Protease. Fig. 1. 3D Illustration of interaction between Lopinavir and 3CL-protease

The characteristic of this interaction is the high polarity between Lopinavir and the active site of the Protease.

An interesting exploration, Azithromycin well-known for its anti-bacterial activity, showed an interesting result with a relatively high score compared to the rest of the treatments, hence it is interesting to investigate its clinical results. This interaction is characterized by a higher number of amino acids (Fig. 2). Fig. 2. 3D Illustration of interaction between Azithromycin and 3CL-protease

Oseltamivir as the first neuraminidase inhibitor available orally, classified in the third position with scores very close-to hydroxychloroquine, thus the interaction with the Protease is essentially with its N radical (Fig. 3). 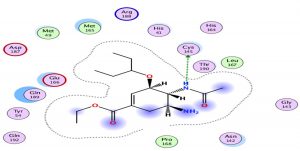 Fig. 3. 3D Illustration of interaction between Oseltamivir and 3CL-protease

Chloroquine and its derivative have the same classification with an approximately identical score with hydrogen interactions. However, hydroxychloroquine seemed to be more effective than chloroquine (Fig. 4). Fig. 4. 3D Illustration of interaction between hydroxychloroquine, chloroquine, and 3CL-protease

The lowest scores were observed for Sequinavir and Favipiravir respectively. It was also observed that Favipiravir had the lowest number of amino acids generated in this interaction (Fig. 5). Fig. 5. 3D Illustration of interaction between Nitazoxanide, Favipiravir and 3CL-protease

In the following table we provide the 3-dimensional interaction of the molecules that are not included in the therapeutic strategies proposed, although they might be used as therapeutic alternatives (Table 2).

Table (2):
3D illustration of interaction of molecules including antivirals drugs and peptidomimetic agent.

Remaining objective, our results demonstrate solely the scores that we were able to demonstrate based on our modeling methodology. That means that our results do not influence the favoritism of one treatment over the others. The treatments we have investigated in the manuscript are typically the subject of several clinical trials. Although our study is like the first trial, comparing the different treatments.

It has been suggested that the therapeutic effect of lopinavir on SARS-CoV2 may be primarily due to their inhibitory effect on endopeptidase11. Oral treatment with oseltamivir has been used as an empirical drug for several cases of SARS-CoV2 in Chinese hospitals12. Another analysis comparing only antiviral agents had mentioned their efficacy on the modeling level, this Screening has studied 61 molecules, Lopinavir binds to all SARS-CoV2 protein structures with a docking score less than -6.5. Also, it is interesting to note that HIV protease inhibitors have shown strong results in silico docking13.

A briefing in China reported that chloroquine has been used successfully to treat more than 100 SARS-CoV2 infected cases resulting in improved radiological findings and viral clearance, and reduced disease progression. The score we obtained throughout our docking can be explained by the indirect action on the virus, although the proposed mechanism for chloroquine and hydroxychloquine Increases endosomal and liposomal pH required for virus/cell fusion9.

All of our results provide an overview of the prescription and repositioning of the different treatments cited in the literature. It is important to notice that the benefit-risk ratio and the therapeutic tolerance range should be taken into consideration.

The azithromycin seems to have an inhibitive effect on viral replication, given its broad spectrum of activity. The documents mentioning azithromycin report that it only may be used in association with other treatments, whereby, based on our analysis, the second classified azithromycin would be considered as a treatment with adaptations according to its pharmacokinetic parameters. Oseltamivir is being used in several clinical trials as a comparison group; the reasons for this are not unraveled except its effectiveness against influenza. A recently published In silico research demonstrated that Oseltamivir may have an inhibitory effect on the SARS Cov2 main protease12.

There are limited trials investigating the antiviral activity against SARS Cov2 of the agents listed in Table 2. Concerning tipranaivir nonpeptidic protease inhibitor used in combination with ritonavir and demonstrated beneficial effect against HIV14. It was reported that nitazoxanide, through preventing membrane fusion and acting as an antiprotozoal agent, may have an inhibitory activity against COVID-1915. Zanamivir is an approved medication for the treatment of influenza A and B viruses16. Indinavir and Saquinavir have been shown to treat and prevent HIV. Remdesivir inhibits viral replication by initiating effective metabolic conversion in cells to activate nucleoside triphosphate which, in turn, inactivates viral RNA polymerases17. This agent has shown promising antiviral activity In-Vitro and is accessed for activity against SARS-CoV-218.

In the present context of the rapid spreading of the SARS CoV-2 pandemic and its huge impact both in terms of global health and socioeconomically, it is difficult to assess what would be the efficient alternative treatments in the shortest possible time. Although scientific rigor is inherent and adherence to guidelines is ideal, it seems difficult to achieve perfection and apply all methodological recommendations in every situation to evaluate and identify successful therapies.