Staphylococcus aureus is one of the major causes of life threatening pneumonia, especially in immunocompromised population. In HIV positive patients, S. aureus associated pneumonia can be either health care associated or community acquired and responsible for high rate of mortality. In this study total 102 throat swab samples of HIV-Infected Patients with suspected pneumonia were collected during 2014-2016, out of them 46 samples (45.1%) were found positive for S. aureus by biochemical tests. 38 (82.6%) isolates were found multiple drug resistant while 9 (19.6%) strains showed resistance to cefoxitin antibiotic, were considered as methicillin resistant Staphylococcus aureus (MRSA). Only one strain (2%) was found vancomycin intermediate (VISA), remaining 98% isolates were sensitive to vancomycin antibiotic. In PCR test, all cefoxitin resistant strains were found positive for the presence of MecA gene.  Biofilm former S. aureus were screened by tissue culture plat (TCP) methods. In TCP assay, 21 (45.6 %) isolates were confirmed as high biofilm formers (OD value > 0.250), 16 (34.8 %) were moderate biofilm formers (OD values- between 0.150 to 0.250), while 9 (19.6 %) were low biofilm formers (OD value < 0.150). A significant association was found among multiple drug resistance and high biofilm formation (p value < 0.05). High prevalence of biofilm forming MDR isolates in airways of pneumonia suspected HIV patients is matter of great concern as poor antibiotic response may cause more severe diseases with increasing cost and duration of treatment. The MecA gene might be a cause of methicillin resistance among MRSA isolates.

In contrast, S. aureus normally colonize in skin and mucous membranes in the upper respiratory tract of healthy individuals without any complications, but in immunocompropised people, S. aureus has been associated with many syndromes such as pneumonia, bacteraemia, septicaemia, urinary tract infections, diarrhea and skin infections with increased severity7. The detection and characterization of S. aureus among clinical samples is generally done by biochemical tests such as mennitol fermentation, coagulase and DNase. Few studies suggested the polymerized chain reaction (PCR) as molecular technique using amplification of nuc gene for early diagnosis of S. aureus8.

The prevalence of multiple antibiotic resistances in S. aureus is increasing globally, which causes poor antibiotic response and economical burden especially in developing countries7. In the 1960s, first case associated with methicillin resistant S. aureus (MRSA) was reported and in the late 1990s It became a well known cause of community and hospital associated infections9. Previous studies suggested that resistance to methicillin among S. aureus is associated with presence of mecA gene which encodes penicillin binding protein 2a (PBP 2a). Staphylococcal chromosome cassette mec (SCCmec), a mobile genetic element of 21 to 60 kb contains mecA gene. SCCmec may also carry genes such as pT181, Tn554 and pUB110 which may associated with resistance for non-beta lactam class of antibiotics10. Expression of PBPs provides capacity to bacterial cells to continue cell wall synthesis in presence of higher concentration of cell wall synthesis inhibitors11. Molecular detection of the highly conserved mecA gene using PCR amplification has been proved as a benchmark for the early diagnosis of MRSA in the clinical samples12. As an additional virulence factor many S. aureus strains have capacity to form biofilms on biotic and abiotic surfaces13. Biofilms are multilayered arrangement of bacterial cells enclosed in exopolysaccharide matrix, which helps bacterial cells in survival, providing protection against extreme environmental conditions, antimicrobial agents and host immunity14,15.Because of higher level of resistance against host immune responses and antibiotics, biofilm forming S. aureus may lead to sever and chronic disease in individuals with weak immunity such as HIV positive patients. Although in HAART era, a significant fall in opportunistic infections has been noticed, but HIV positive people are still at high risk of opportunistic bacterial respiratory infections16.

HIV patients are under high burden of medications, wrong selection of antibiotics for the treatment not only enhances duration of treatment and financial burden but also make disease more complicated and life threatening. Early detection of S. aureus and evaluation of their virulence such as antibiotic resistance, presence of mecA gene and biofilm formation ability is essential for selection of proper antibiotic for the treatment of pneumonia in HIV patients. The involvement of biofilm forming, MRSA in HIV patients suffering from pneumonia, is not well studied. The aim of this study is to detect the prevalence of multiple drug resistant and biofilm forming Staphylococcus aureus among pneumonia suspected HIV patients and evaluate the presence of mecA gene among isolates.

Isolation and characterization of S. aureus from clinical samples
The isolation and characterization of S.aureus from clinical samples (throat swab) was done by direct throat swab inoculation on mannitol salt agar (MSA) (HiMedia laboratories private limited, India) plates, followed by incubation at 37 °C for 24 h. Gram staining was performed followed by biochemical confirmation tests such as DNase, mannitol fermentation and coagulase tests. All strains which were positive for mannitol fermentation, coagulase and DNase tests were confirmed as Staphylococcus aureus17.

Detection of nuc and mecA genes by PCR amplification
A multiplex PCR was standardized for screening of nuc and mecA genes among isolates, using specific primers (Table-1). The thermal cycling conditions: an initial denaturation at 95 °C for 5 min, followed by 35 cycles of denaturation at 95 °C for 30 Sec, annealing at 51 °C for 30 Sec and extension at 72 °C for 90 Sec, final extension at 72 °C for 10 min., followed by agarose gel electrophoresis. DNA bands were visualized under gel imaging system (Bio-Rad Laboratories).

Table (1):
Primers used for the molecular detection of nuc and mecA genes.

Screening of biofilm forming S. aureus strains was done by tissue culture plate (TCP) method19 with some modification20. TSB media (HiMedia laboratories private limited, India) enriched with 1% glucose was inoculated with isolates and incubated for 24 h at 37 °C. Log cultures were diluted (1:100) with fresh TSB medium, each well of 96 welled TCP was filled with inoculated media (200 µL) followed by incubation for 24 h at 37 °C. After incubation the content of plate was removed and washed three times with 200 µL of phosphate buffer saline (PBS). 0.25% crystal violet solution (200 µL) was added to each well and incubated for 20 min and rinse thrice with PBS. 200 µL of 95% ethyl alcohol was added. Optical density (OD) of stained biofilm in each well was determined by ELISA Reader (Thermo Fisher Scientific, India) at wavelength 630 nm. TCP assay was repeated three times for each strain.

Statistical analysis was performed using SPSS software (IBM SPSS statistics 20). The chi square test was performed to compare MDR and non MDR isolates for the presence of virulence factors such as biofilm formation and mecA gene. 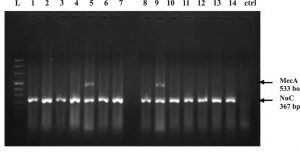 Acquired immunodeficiency syndrome (AIDS) is a major health issue specially in developing world7. Weak immunity in HIV positive people place them at increased risk of opportunistic infections. Opportunistic associated respiratory illness is more common in immunocompromised people than healthy individuals3,5. Although most of the respiratory infection are self limiting and can be treated with medications but in HIV patients these infection may cause severe complications and life threatening conditions1. In HAART era the immunity status of HIV patients has significantly improved due to improvement in the level of CD4 cell count but the threat of opportunistic infections among HIV positive individuals cannot be denied16.

S. aureus is a common opportunistic pathogen associated with community acquired as well as nosocomial infections7. The emergence of antibiotic resistance and rise in level of virulence among S. aureus is a burning health issue both within the community and hospital settings. Occurrence of MRSA in respiratory infections has increased over time among HIV patients21, 22. MRSA associated pneumonia among HIV patients can be community acquired or health-care associated and may lead to higher rate of morbidity and mortality. The rate of colonization by S. aureus is higher in HIV positive patients. As a colonizer MRSA may associated with increased risk of infections23, 24. In our study, out of 102 throat swab samples of HIV patients, 46 samples (45%) were positive for S. aureus. Out of the confirmed S. aureus, 82.6% were MDR while 19.6% were found MRSA. All MRSA were MDR. In a previous study, S. aureus was found associated with 25% of pneumonia cases in HIV-positive patients, among them 65% were MRSA25. Another study showed 85.7% prevalence of MRSA in cutaneous abscesses of HIV patients26.

High prevalence of biofilm forming MDR isolates in airways of HIV-Infected Patients with suspected pneumonia is matter of great concern as poor antibiotic response may cause more severe diseases with increasing cost and duration of treatment. The methicillin resistance among MRSA isolates showed positive association with the presence of mecA gene. Biofilm formation among S. aureus isolates might be a cause of increasing multiple antibiotic resistance.

Acknowledgements
We would like to thank to Indian council of medical research (ICMR) for financial supports.