Mannose and mannooligosaccharide acted as prebiotic that consumed by probiotic bacteria. Mannanase were the second most important enzymes for the hydrolysis of hemicelluloses, beside xylanase. The objective research was to obtain eminent strains of Bacillus sp. in mannan degradation which can potentially be a probiotic candidate. The study employed a completely randomized design using four concentration levels repeated six times. Halotolerant Bacteria were isolated from mangrove ecosystem at Hanura beach, Teluk Pandan, Pesawaran District in Lampung Province. They are grown on the sea water complete agar media. Mannan degradation isolates were then characterized to determine their character with a variety of tests, including resistance to pH, salt, and metal ions, pathogenicity, and determination of mannanase production duration. Thirty strains are found to grow at 3-6% salt content, and 9 of them have mannanolytic activity. They grow optimally at pH 7-10. Seven isolates were proven to be positively hydrolyzed blood agar in the pathogenicity test. The addition of Iron (III) Chloride increased the enzyme activity by 11.12% in IBK3 isolates at 96 hours of cultivation period which was 0.05 UmL-1. It acted as cofactors of enzymatic reactions. Strains Bacillus sp., were able to degrade mannan substrate. It quantified using Index of mannanolytic. Strain IBK3 has the highest index of mannanolytic activity as much as 10.74. Their ability to grow in salt media indicated that they were halotolerant. They were more likely to live at base rather than acid habitat. Only IBK3 and ID2K1 showed non-pathogenic isolates. Only FeCl3 addition has proven to rise up enzymatic activity.

Mangrove is a coastal intertidal wetland forest composed of halophytic tree and shrub species1 and Indonesia has the largest mangrove forest in Southeast Asia2. The area of mangrove forests in Lampung Province was 17.110 ha3. Hanura Village, Teluk Pandan District, Lampung was one of the many Lampung regions that had a mangrove ecosystem. The coastal waters of Hanura Village were mostly overgrown with mangrove forests and make them fertile because they get an accumulation of organic material from marine aquaculture activities in the form of sediment residues and mangrove leaf litter on the forest floor4. Organic materials from litter and dead mangrove stems are materials that decomposed by microorganisms. The microorganisms produce minerals that help maintain the fertility of the surrounding soil5. Structural analysis of the polysaccharides in the cell walls of dicotyledon is known to consist of cellulose, hemicellulose, and lignin6.

Hemicellulose was the second polysaccharide which was very abundant in nature after cellulose. Hemicellulose had two main components, namely hetero-1.4-β-D-xilan and hetero-1.4-β-D-mannan7. The mannan component breaks down by mannanase into mannose and mannooligosaccharide. Mannose and mannooligosaccharide acted as prebiotic that consumed by probiotic bacteria. Mannanase enzyme activity has different levels depending on the source. This enzyme can be found from various sources including animals, plants, and microorganisms. In research, generally mannanase is taken from microorganism because it can be produced in large quantities and the isolation process is also easier8. Mannanase producing microorganisms was include Bacillus subtilis MAN-5119, Bacillus subtilis TJ-10210, Bacillus pumilus M2711 and Bacillus cereus N112. It would be very good if these bacteria are also probiotic. Probiotic bacteria produce enzymes that are able to break down complex compounds to be simple so they are ready to be used by fish feed13. The type of probiotic bacteria is influenced by the environment. Environmental factors such as pH condition and salinity where the bacteria are isolated greatly affect their ability to grow, develop and to carry out their functions as expected14. The ability of microorganisms to degrade mannan was very helpful in the field of aquaculture. It applied to the media for shrimp maintenance, water media, sub grade and feed. This study aims to obtain eminent strains of Bacillus sp. in mannan degradation which can potentially be a probiotic candidate for shrimp farming.

Salt tolerance test
Mannanolytic isolates were further tested for their resistance to salt content. Bacteria were grown on SWC agar with the addition of salt as much as 0%, 3%, and 6% NaCl. The size of the colony was observed after an incubation period of 24 hours at room temperature15.

pH tolerance test
Mannanolytic isolates were tested for their resistance to media pH stress. Bacteria were grown on SWC agar media with pH 4, 7, and 10 whereas 1 N HCl and 1 N NaOH were utilized respectively. After an incubation period of 24 hours at room temperature, growth and size of the colonies were observed and recorded15.

Pathogenicity test
Mannanolytic bacterial isolates were tested for their pathogenicity using sheep-blood agar media. Observations were made after an incubation period of 24 hours at room temperature. Isolates that have the ability to hemolysis are shown by the formation of clear zones around the colony16.

Metal susceptibility test
Selected isolates that did not show any pathogenicity in the previous test were further tested in determining the mannanolytic index by growing on SWC media with the addition of metal substrates and ions to know mannanase acivity in metal ion present. The metals used are Fe, Pb, Cu and Al in the form of salt FeCl3, PbCl2, CuCl2, and AlCl317.

Enzyme production
Determination of the length of production time proposed by taking 5 mL of culture every 24 hours of incubation for 7 days. It centrifuged at 8500 rpm for 15 minutes. Enzyme activity was determined using 3.5-dinitrosalicylic acid (DNS) method and the absorbance was read at a wavelength of 540 nm. One unit (IU) of -mannanase activity was defined as the amount of protein producing 1 μmol/L of reducing sugar per minute (e.g., mannose) under standard conditions15.

Bacteria Selection for Mannanolytic activity
The selection results showed that there were 9 mananolytic isolates from a total of 30 isolates tested. These isolates were IAK1, IAK2, IAK4, IBK3, IDK6, ID2K1, ID2K2, IKK1, and IKK3. The IBK3 isolate gave the largest mananolytic index of 10.74 which was indicated by the clear zone formed around the colony (Table 1). Gram staining indicated that IBK3 isolates were Positive-bacteria in bacilli form.

Salt tolerance test
Probiotic microbes were able to grow and form colonies on bile salts18. The results showed that salt levels can affect bacterial growth. It is indicated by the size of the colony which varies in 0%, 3%, and 6% salt content. Colony size of some bacteria tends to be larger in media with salt stress 0% and 3%, whereas in media with salt content of 6% the size of the colony tended to be smaller (Fig. 1).

pH tolerance test
In testing the pH of the media showed that all isolates resistant to alkaline stress but not resistant to acids, this was indicated by the absence of appearance of bacteria that grow on media with a pH of 4 (Fig.2).

Metal susceptibility test
The presence of metal ions in the media acted as inhibitors or as cofactors of enzymatic reactions. The addition of FeCl3 metal as much as 20mM increased the mannanolytic index of IBK3 isolates which was 3.76 or 11.12% higher when compared to controls (Fig.4).

Enzyme production
Mannanase enzymes are primary metabolites needed by bacteria to degrade carbon sources in the form of mannan contained in the locust bean gum substrate during bacterial growth. One unit of mannanase activity was defined as the amount of enzyme that released 1 μ.mol-1 of reducing sugar per min under standard assay conditions22. The IBK3 isolate showed the highest enzyme activity at the production time of 96 hours, which was 0.05 UmL-1 and continued to decline until 168 hours (Fig. 5). 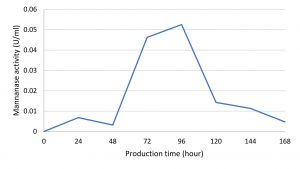 Isolation of bacteria on SWC agar media with the addition of 0.5% locust bean gum (LBG) substrate showed the growth of mananolytic bacteria. The presence of mananolytic bacteria indicated by the presence of clear zones formed around bacterial colonies after staining with congo red and NaCl. Congo red was bound into the ß-1.4-D-manopiranosil bond and turned red to the media. LBG contained in the media had broken down by bacteria as a source of carbon in the process of metabolism. The breakdown produced mannose monosaccharides, reduced the binding of Congo red dye and consequently generated a clearing zone18.

The ability of isolates to grew in stress levels of salt influenced by the source of isolates obtained that our isolate was taken from estuary ecosystem. These results were almost the same as the research of17, they were show that marine bacteria can grow well at 2.5 – 5% salt content. Bacteria need nutrients to grow during the incubation period16. Nutrients were obtained from the surrounding environment media. The more acidic in media caused more hydrogen content in media. The presence of too many hydrogen ions in the media inhibited transport nutrients.

The halotolerant organisms maintain a low level of ionic concentrations to synthesize compatible solutes to balance the osmotic level inside the cytoplasm with the outer medium. These maintenance mechanisms of the internal environment and the properties of the cytoplasmic membrane help them to adapt to changes in the saline environment as salt lakes, saline soils, and salted food products27.

Probiotic agents must not be pathogenic and had proven to have health effects18. The observation of hemolysis test gave of various results. Hemolysis divided into 3 was namely alpha, beta, and gamma hemolysis. Beta hemolysis was a complete lysis of red blood cells, it caused around the colony turn to clear area. Alpha hemolysis was partial hemolysis while gamma hemolysis was no hemolysis19. Toxicity tests were important not only to discard those few species of some Bacillus genera, such as B. cereus and B. anthracis. Consequently, these two γ hemolytic strains (IBK3 and ID2K1) were the most promising probiotic candidates from all 30 isolated Bacillus because they were not pathogenic or able of producing toxic substances that may harm fish, or shellfish. IBK3 was selected to optimize in the enzyme production due to had the highest mannanolytic index.

Metal ions were optimized through mannan degrading-enzyme activity. It conducted to understand which metal played as cofactor or even inhibitor in mannan degradation. Mannanase activity of Bacillus subtilis increased with the addition of Fe3+ metal ions20. Unfortunately it is unable tolerated Cu2+ more than 0.015mM, because7 confirmed that Cu2+ acted as an inhibitor of the mannanase enzyme from Geobacillus stearothermophillus L-07. It tolerated lead (Pb2+) less than 0.06 mM. It accumulated Al3+ in maximum no more than 3 mM. Beside that metal ions played as inhibitors when it bound to the active side of the enzyme so that the enzyme became ineffective in binding the substrate (Fig. 1). These results were in accordance with the research21 which showed the highest activity of the mannanase used Bacillus cereus in the production time of 88-96 hours. It7 showed the highest activity of the enzyme mannanase isolate Geobacillus stearothermophillus L-07 at the time of production of 36 hours with 3.1 U.mg-1activity.

Strains Bacillus sp., were able to degrade mannan substrate. It quantified using Index of mannanolytic. Strain IBK3 has the highest index of mannanolytic activity as much as 10.74. Their ability to grow in salt media from 3- 6 % salt content indicated that they were slightly halotolerant. They were more likely live at base rather than acid habitat. Only IBK3 and ID2K1 showed non-pathogenic isolates. Only FeCl3 addition has proven to rise up enzymatic activity.

ACKNOWLEDGMENTS
We would like to express our grateful thanks to Ms. Oni Mastuti for her assistance with the LAB experiments.

AVAILABILITY OF DATA
The datasets are available from the corresponding author on reasonable request.