Nanotechnology is a newly emerging branch of science with efficient techniques which gained lots of researcher attention as well as environmentalist due to their immense role in various fields1. In worldwide, the utilization of nanoparticles in various sectors has increased from 225,060 to 584,984t with 21.1% annual growth rate2. Based on their shape and structure, nanoparticles exhibited unique properties. Engineered chemical nanoparticles (NPs) were extensively utilized in cosmetics, medicine, food and biological sciences3 resulted in high incidence of discharge into the ecosystem either accidently or intentionally4. Deposition of engineered chemical NPs in the environment cause serious health ailments to the biota including humans5,6.

Nowadays, green synthesis of nanoparticles has gained researchers attention due to their non toxic or less toxic properties which has the similar unique properties. Plant extract-mediated nanomaterials synthesis is one of the most stable and suitable alternatives than compared to physical, chemical and microbial method productions. Leaf extracts were used as an alternative source for raw materials by using less energy and toxic chemicals. Green synthesis provided a hygienic environment with more stable compounds and lesser waste products12.

Green synthesis of Ag and Zn nanoparticles
The plants Phyllanthus niruri (L.) and Aristolochia indica (L.) were collected from Jamal Mohamed College (Tiruchirappalli, Tamil Nadu, India). Plant leaves were cleaned with tap water and then with distilled water. Finely chopped leaves (10gm) mixed with 100ml deionized water and boiled (10mins) at 80°C and 50-60°C for P. niruri and A. indica leaves respectively. By using Whatman (No. 1) filter paper, extraction was filtered and the filtrate was collected, kept at room temperature.

10ml of Phyllanthus niruri leaf extracts mixed with 90mL of AgNO3 (0.01M) at room temperature. Ag NPs reduction was clearly observed within 10mins. Simultaneously, 100ml of Aristolochia indica leaf extracts mixed with Zn(NO3)2.6H2O (0.1M) salt and green reducing agents19 which forms white coloured homogenous solution and kept in stirrer for 4-6hrs at 80˚C and the precipitate was calcined at 800˚C for 5hrs20. 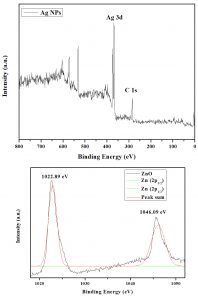 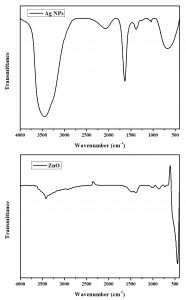 The medicinal plant extract are act as dual role like reducing and capping agent36. FTIR spectra of Anigozanthos manglesii green synthesized Ag NPs with broad absorption band at 3448cm-1 and hydroxyl (-OH) group present in the bio-macromolecules on leaf extract37. FTIR spectra of biosynthesis Ag NPs vibration frequency observed at 1381cm-1 and corresponding to –NO3 stretching whereas the peak at 692cm-1responsible for the reduction and capping during the synthesis of Ag NPs36,38. Zandi et al.39, Munoz-Hernández et al.40 and Xiong et al.41 reported results evidenced our ZnO NPs FTIR results.

Whereas photoluminescence spectra of Aristolochia indica leaf extracts green synthesized ZnO NPs excitation wavelength observed at 350nm. The emission spectra showed four peaks at 398, 408, 419 and 434nm. A peak observed at 398nm due to the radiative recombination of collision process during ZnO NPs green synthesis (Fig. 4). Fan et al.42 reported two violet emission bands at 408 and 419nm due to the electron transition between the Zn at interstitial with the high incidence ones. Mishra Sheo et al.43 also reported blue emissions peaks at 434nm, where strongly ascribed due to singly ionized Zn vacancies. 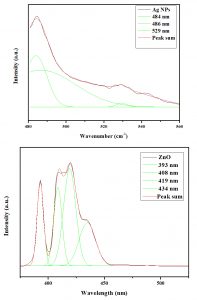