Pseudomonas aeruginosa is a Gram-negative, oxidase-positive, and aerobic bacterium found in the family Pseudomonadaceae, and they are widespread in nature.1 It is a free-living, non-enteric bacterium, commonly found in soil and water1. P. aeruginosa has biofilm-forming capabilities, and they are commonly found in moist or wet environments such as bath tubs, sinks and as common contaminants in hospitals and abattoirs. P. aeruginosa is known for its resistance to antibiotics, and the bacterium is multidrug resistant in nature1,2. Metallo-b-lactamases (MBLs) are carbapenem-hydrolyzing enzymes that have the exceptional ability to hydrolyze the carbapenems including imipenem, meropenem, ertapenem3,4,5,6. MBLs are a type of class B carbapenemases which are usually found in members of the Enterobacteriaceae family, Acinetobacter species and P. aeruginosa isolates, where they mediate bacterial resistance to the carbapenems3,6. MBL-producing bacteria are of public health interest owing to the fact that bacteria that harbour genes for their production are notably resistant to a handful of antibiotics 6,7,8,9,10,11. They confer variable range of resistance to all beta-lactam antibiotics except the monobactams such as aztreonam. More so, the presence of MBL-producing bacteria put the use of the carbapenems under threat5,6,12. Gram negative bacteria including P. aeruginosa that produces MBLs has been previously reported from hospital and non-hospital environment here in Nigeria and elsewhere8,13,14,15,16, 17,18,19. The emergence and spread of carbapenem resistance significantly limits possible treatment options for treating life-threatening infections caused by these bacteria. Pathogenic bacteria that harbour genes for the production of carbapenemases such as MBLs are of public health importance since the carbapenems are often the last line of drugs for the treatment and management of multidrug resistant infections 3. Antibiotic resistance genes are crucial in the niche colonization of microorganisms since microbes need to combat antimicrobial compounds produced by other microorganisms and higher organisms in their immediate environment 20,21. MBL-producing bacteria are a public health menace, and this necessitates the need to detect by genotypic and phenotypic techniques the prevalence of these organisms in the community in order to forestall any health danger due to them. It is in view of this that this study investigated by multiplex PCR technique the prevalence of MBL genes, particularly blaIMP-1 and blaVIM-1 in P. aeruginosa isolates from the non-hospital milieu.

Ethical consideration
This research was conducted in line with the World Medical Association (WMA) declaration of Helsinki on the principles for medical research involving human subjects and identifiable human and animal material/data 22. There was no written ethical approval as the samples were collected at the point of slaughter.

Modified Hodges (Cloverleaf) Test
The presence of MBL in the P. aeruginosa isolates was phenotypically determined. Briefly, the susceptibility of the isolates to imipenem, meropenem, and ertapenem was evaluated as per the CLSI criteria 10,24,26. Isolates found to show reduced susceptibility to the carbapenems as per antibiotic breakpoints recommended by CLSI was phenotypically confirmed for MBL production. The modified Hodges or Cloverleaf test was performed by aseptically swabbing MH agar plates with Escherichia coli ATCC 25922 strain. The inoculated MH agar plates were allowed for about 5 min; and imipenem (10 µg) single disks were aseptically placed at the center of the MH agar plates. The test bacteria (adjusted to 0.5 McFarland turbidity standards) were heavily streaked in three different directions from the edge of the imipenem (10 µg) disk to the center of the MH agar plates. Susceptibility plates were incubated overnight at 30oC. The plates were macroscopically observed for indentation, and the growth of the test bacteria towards the imipenem (10 µg) susceptibility disk. Growth of test bacteria towards the carbapenem disk is indicative of metallo-b-lactamase production phenotypically 4,10,14,26.

Multiplex PCR characterization of MBL genes
Table 1 shows the gene sequence of forward and reverse primers used for the amplification of blaIMP-1 MBL genes and blaVIM-1 MBL genes. All isolates of P. aeruginosa positive for MBL production by the modified Hodges test technique was assessed for the presence of blaIMP-1 and blaVIM-1 MBL genes by multiplex PCR technique using specific primers supplied by Inqaba Biotech limited (Inqaba Biotechnical Industries Ltd, South Africa). The specific primers for the multiplex PCR was constructed as described in a previous report 25,27. Multiplex PCR amplification of the MBL genes in the test isolates was performed in a thermal cycler (Lumex instruments, Canada) with a final volume of 26.5 µl master mix comprising 0.2 µl of Taq polymerase enzyme U/µl, 2.5 µl of 10X PCR buffer along with 2.5 µl MgCl2, 1 µl of 10 pM from each of the forward and reverse primers, 2.5 µl of dNTPs MIX (2 mM), 3 µl of DNA template (from the test isolates), 14.8 µl of nuclease-free water. The initial denaturation temperature was at 95oC for 2 min, and this was followed by 25 cycles of DNA denaturation at 95oC for 30 sec. The primer annealing was carried out at 48oC for 30 sec, and primer extension was carried out at 72oC for 30 sec. After the last cycle, a final extension step was carried out at 72oC for 2 min.

Gel electrophoresis
Agarose gel electrophoresis was carried out in order to separate the amplified DNA products according to their individual sizes when an electric field is applied across the gel 27. This was done using 1.5% agarose gel prepared by dissolving 3 g of the agarose powder in 0.5X TBE buffer. The agarose solution was heated in a microwave until all the agarose was dissolved. The molten agarose gel was cooled to about 50oC before pouring, and an aliquot of 1.0 µl of 10 mg/ml of ethidium bromide (EtBr) dye was added to the agarose gel using gloved hands. A comb was then placed in a sealed mould (gel casting chamber), and the molten agarose gel was poured into the sealed gel casting chamber. The gel was allowed to cool for 20 min before the seal and the comb was removed. Thereafter, the solidified gel was placed in the gel electrophoresis vessel or chamber that was filled with 0.5X TBE buffer. And the PCR products (i.e. the amplified genes in the Eppendorf tubes) was mixed with 1 µl 6X coloured loading buffer per 5 µl of the PCR product and then aseptically pipetted into the wells in the gel. An aliquot of 5 µl of the 100 bp DNA marker/ladder was also loaded on one of the gel well while the PCR reagent without DNA was loaded in another well as a negative control. The gel was run at 80 V for 2 h; and then visualized with UV transilluminator at 260 nm. 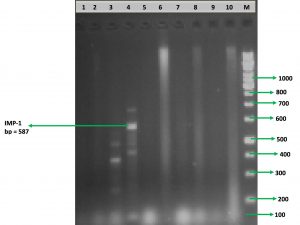 Fig. 2. Electrophoretic analysis and identification of blaIMP-1 MBL gene in the P. aeruginosa isolates. Lane M is the DNA marker/ladder which is a 100 bp marker. Lanes 2-10 shows the different DNA samples. Lane 4 shows amplified products of blaIMP-1 MBL gene with a base pair size of 587 bp. There was no amplified gene product in lanes 1,2,3,5-10. Lane 1 is the negative control which contains nuclease free water.

The result of our study is the first report on the prevalence of P. aeruginosa isolates of food-producing animals in Abakaliki, Nigeria that harbours the blaIMP-1 MBL genes. Antibiotic usage for the propagation of food-producing animals is one of the major factors through which resistant bacteria including those that produce MBLs emerge and spread in the community. The surveillance of antibiotic resistance and their genetic determinants in livestock and other agricultural practices in this part of the world should be improved upon through proper detection and awareness on proper antibiotic usage in order to contain the nefarious activities of drug resistant bacteria.