The majority of HIV / AIDS patients have common secondary infections including of oral candidiasis. Fluconazole can be used to treat oral resistance in candidiasis. Management that can reduce risk can be minimized. However, some evidences suggest that the use of fluconazole is not effective for oral candidiasis. A 34-year-old male patient went to Dr. Soetomo General Academic Hospital, Surabaya, Indonesia, with main complaint of discomfort and pain in the tongue. The physical examination showed a white pseudomembrane on the tongue and palate, which could be removed but left reddish and painful marks. The examination from tongue and palate swab found a colony of white Candida albicans and showed resistant to fluconazole, intermediate to ketoconazole, and sensitive to nystatin. The patient received nystatin oral suspension for three times a day as much as 5 ml (500,000 units). The pseudomembrane disappeared on day 10. The medication continued for fourteen days. No sign of recurrent found in two weeks after the treatment. The administration of nystatin can be used as an effective medication for oral candidiasis.

Indonesia is a country with high number of HIV/AIDS cases. There were 36.7 million HIV/AIDS patients reported in Indonesia in 2016. New cases were found in 1.6 million patients from 2010 to 20161. HIV/AIDS patients with oral candidiasis are at high risk of experiencing resistance to the treatment given.

Case Presentation
A 34-year-old male patient was presented from Indonesia (Java by ethnicity) with main complaints of discomfort and pain in the tongue for two days before visiting the hospital at March 15, 2019. He was inpatient for 14 days (2 weeks) at dr. Soetomo General Academic Hospital, Surabaya, Indonesia. The patient also had eating difficulty because of the pain he felt. He had suffered fever two days before he went to the hospital. The patient had never been examined or received treatment for his complaint. He had a history of being diagnosed with HIV stage IV and receiving ARV therapy for the past two years. He was having pain in his genital areas when urinating. His motivation of life was low and the number of nutrition consumed was few (<2000 kcal/day). Before the use ARV, his CD4 count of <200.

The physical examination of oral cavity showed white pseudomembrane on the tongue and palate (Fig. 1). The anthropometric examination showed a body weight of 36 kg and a height of 160 cm. This pseudomembrane could be removed, but left a reddish (erythematous) mark and painful. KOH examination obtained positive result to fungi (Fig. 2). The blood test obtained the following results: hemoglobin level of 11.1g/dL, WBC count of 5630/μL with 3.9% lymphocyte, CD4 count of 269, non-reactive HbsAG of <0.10, non-reactive Anti Hepatitis C Virus of 0.26, BUN of 6 mg/dL, serum creatinine of 0.6 mg, serum glutamic oxaloacetic transaminase (SGOT) of 31, and serum glutamic pyruvic transaminase (SGPT) of 52. Urinalysis examination found erythrocyte (2+), proteinuria (2+), and leucosyturia (3+). Examinations of serum electrolyte, chest radiograph, and electrocardiogram were normal. 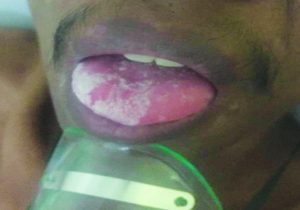 Fig. 1. Pseudomembrane in the patient’s tongue.

Fig. 2. The results of KOH and Gram examinations showed blastopores and pseudohyphae.

Based on the signs symptoms that arise in the patient gets the main diagnosis of oral candidiasis and a second diagnosis was HIV / AIDS stage IV. He has potenta urinary tract infection diagnosis and we collaborated with genital division but it was not administered any therapy. Therapy: he received were administration of fluconazole of 150 mg/day, duviral of 1 tablet/day (300 mg zidovudine and 150 mg lamivudine), multivitamin B complex and iron 1 tablet/day, counseling, educated to oral hygiene, and collaboration giving high-protein high-calorie diets.

One week later, he wasn’t not feeling better post use of fluconazole so that swab examination from oral tissue was taken. Culture was performed on Sabouraud Dextrose Agar (SDA) media at 37°C for 48 hours7. SDA agar examination was continued by culture using CHROMagar (CHROMagar Candida, France). Candida albicans and Candida glabrata colonies were identified. After being successfully identified, a resistance test was conducted using a disk diffusion method on Mueller Hinton agar with 2% glucose and methylene blue. Candida species isolates were implanted in the agar, and then paper disks containing fluconazole, ketoconazole, and nystatin were placed on top of it. Observation for the appearance of inhibition zone around the paper disc had been done for 24-48 hours. Measurement of the diameter of inhibition zone was done using a caliper (Rosco Diagnostica, Taastrup, Denmark). The interpretation of diameter of inhibition zone based on CLSI8. The results showed fluconazole resistance, ketoconazole intermediates and sensitive to nystatin. He was using fluconazole during the culture process. When, result of culture finished, fluconazole drug was replaced to nystatin drug.

March 29, 2019. He was outpatient and educated to maintain his oral hygiene, and was given a suspension of nystatin which was consumed three times a day as much as 5 ml (500,000) for fourteen days. He was also given multivitamin B complex and iron 1 tablet/day. One week later, he was called again to the hospital and treatment continued until 7 days. On the sixth day of treatment (used nystatin), the pseudomembrane began to thin out (Fig. 4a). On the tenth day of treatment (used nystatin), pseudomembrane got disappeared (Fig. 4b). On the fourteenth day, no sign of complications or recurrence was found.

In various literatures, it is stated that 50-90% of HIV/AIDS patients have oral candidiasis9-12. Candidiasis has several types but the most common type found in HIV/AIDS patients is erythematous chronic type9,13. Acute pseudomembranous candidiasis is the most frequent type of oral candidiasis. A distinct border white plaque that could be confluent in buccal mucosa, tongue, palate and gums is the pathognomonic clinical sign of oral candidiasis. This soft pseudomembrane resembles cheese and milk curd which contains desuamated epithelial cells, fungal elements, inflammation cells, fibrin, and food debris attached to the inflamed epithelium. Plaque exfoliation will expose an erythematous base. In severe case, candidiasis might spread to pharynx or esophagus. Erosion or ulceration can also occur as a complication that results in inadequate food intake due to pain and burning sensation on chest and throat. Pseudomembranous candidiasis on HIV patients typically has longer duration and often recurrent14,4.

HIV/AIDS patients experience suppression in the immune system. This condition makes HIV/AIDS patients susceptible to opportunistic infections, including fungal infections. The increased risk of fungal infections makes the use of anti-fungal drugs rises, under dose, and irrational that leads to secondary resistance. The secondary resistance causes changes and gene mutations in Candida which cause the failure of anti-fungal to carry out its mechanism of action. So far, Candida albicans is still considered sensitive to anti-fungal drugs. But because of the non-standard drug usage, some strains of Candida albicans turn into resistant strains5.

Resistance to one type of azole drug may causes cross-resistance to other azole drugs. But sometime this resistance is specific to only one drug. It depends on the specificity of the resistance mechanism (e.g. the affinity of the target enzyme or pump for certain molecular structures). Through several mechanism pathways, azole drugs are not capable to inhibit the biosynthesis of ergosterol which is an important component of the fungal membrane5. Several species of Candida non-albicans are intrinsically resistant to the azole group, namely Candida krusei and Candida glabrata18.

Anti-fungal susceptibility examination is proposed to ensure the minimum amount of drug needed to inhibit the growth of fungal strain (it is called minimum inhibitory concentration/MIC). It is generally used to determine the relative effectiveness of various anti-fungal drugs and to detect the formation of organisms that are resistant to drugs. However, the MIC value for any drug depends on the quality of the specimen, quantity of inoculum, composition and pH of the medium, temperature and time of incubation, drug solvent and growth curve19,20.

In this case report, the patient received nystatin suspension therapy in accordance with the results of the anti-fungal sensitivity test. Nystatin was consumed three times a day as much as 5 ml (500,000 units). Various literatures stated that nystatin is the first choice of topical therapy for candidiasis patients without immunosuppressive conditions9,10,13,17. Topical treatment of nystatin uses a nystatin tablet dosage of 100,000 units three times a day9. Another study reported that nystatin can beused four times a day, with a dose of 500,000 units for adults and 100,000 units for children21.

In the use of nystatin suspension, Patil et al. claimed that the dose of nystatin suspension was 400,000 – 600,000 units, four times a day, for seven to fourteen days17. Guidelines for drug dose in their journal are applied to the patient in this case report, which was 500,000 units, although the consumption is not four times a day, but three times a day. Other difference is the duration of treatment. Patil gave treatment for seven to fourteen days, whereas in this case, the duration of treatment is fourteen days. We took the longer duration regarding the immunosuppressive condition of HIV/AIDS patients.

One of the complications of systemic antifungal drug use in oral candidiasis is the occurrence of hepatitis (drug-induced hepatitis)10. Therefore, it is necessary to periodically ask the sign of hepatitis, such as of yellow eyes, fever, nausea and vomiting. The patient in this case report showed no signs of complications due to the use of oral nystatin.

Oral candidiasis in HIV/AIDS patients often occurs for years and recurrent. Therefore, some researchers suggested the use of prophylactic drugs9. In this case, after the patient stopped nystatin treatment, the administration of prophylactic drugs was not given because there were no signs of recurrent infection.

ACKNOWLEDGMENTS
We thanks to Hastika Saraswati, MD who helped us translate our manuscripts from Indonesian to English.

ETHICS STATEMENT
The study protocol was in accordance with ethical procedure (0231/KEPK/IV/2018). We were explained to patient on the aims and advantages from our study and she received consent forms.

AVAILABILITY OF DATA
The dataset used and/or analyzed during the current study are available from corresponding author on reasonable request.