Various microorganisms such as bacteria and fungi release pigments as secondary metabolic end products such as alkaloids, essential oils, antibiotics, lectins, etc.1 These pigments play a vital role in achieving bacterial virulence and protecting from the host immune mechanisms and ultraviolet light.2 Certain bio pigments extracted from living organisms exhibit antibacterial activity and utilized as medicaments.3 The colour of pigments varies with different organisms, and the change in colour intensity affects the immune-modulatory properties of bacteria.4

Pseudomonas aeruginosa produces a bluish-green pigment known as pyocyanin, which inhibits the growth of other bacteria and becomes dominant in mixed infections.5 Almost 90-95% of strains of Pseudomonas aeruginosa produce pyocyanin which is one of the major virulence factors in it.6 Serratia sp. produces a red coloured pigment called prodigiosin, which shows antimicrobial, immunomodulating and anti-tumour properties.7 The violet-coloured pigment violacein produced by Chromobacterium violaceum has many biological activities against viruses, bacteria, and anticancer properties.8 High occurrence of resistance to various antibiotics is the significant challenges of most bacterial infections.9 Pigment production of bacteria is controlled by a process known as quorum sensing, analogous with biofilm formation and other virulence factors of bacteria.10 Quorum sensing is a microbial signal mechanism that responds to cell population density by gene regulation and is also responsible for the various physiological processes of bacteria.11

Lichens are the symbiotic association of different groups of organisms such as algae, fungi, and bacterial communities and are distributed worldwide.12 It exhibits unique chemical complexity and produces secondary metabolites termed lichen acids due to the presence of a broad spectrum of microorganisms in it.13 Lichen acids provide a wide variety of bio- medicinal values such as antibiotic, antiviral, antitumor, antiprotozoal, anti-inflammatory, analgesic, antipyretic and cytotoxic effects and also a defence against adverse environmental conditions such as ultraviolet rays and excessive dryness.14

Usnic acid is one of the most important lichen secondary metabolites among the hundreds of others.15 It is effective against various types of infections, particularly those affecting the throat, respiratory tract, mouth, skin and urinary tract and also has antioxidant and free radical-scavenging capabilities.16 It is a yellowish coloured pigment and its chemical nature is 2,6- diacetyl-7,9- dihydroxy- 8,9b- dimethyl- 1,3- (2H,9bH)- dibenzo- furandione; C18 H16 O7. The two relatively similar forms of usnic acid are (+) and (-) usnic acid based on the orientation of the methyl group present in the 9b position.17

The present study aimed to evaluate the effect of the (+) usnic acid on the pigment-producing capacity of three Gram-negative chromogenic bacteria by Pseudomonas aeruginosa MTCC 2453, Chromobacterium violaceum MTCC 2656 and Serratia marcescens MTCC 8708.

The study was conducted in the Department of Microbiology, Saveetha Medical College, Chennai, India.

(+) usnic acid isolation
The lichen Roccella montagnei Bel. (Family: Roccellaceae) was collected from Kodikkarai forests, Nagappattinam district, Tamil Nadu (India). About 200 g of the shade-dried material was extracted with methanol in the cold. After 72 hours, the solvent was distilled off, and the methanolic extract so obtained was successively treated with petroleum ether and acetone. The latter fraction was column chromatographed on silica gel and eluted with solvents of increasing polarity. Elution of the column with benzene afforded shining yellow crystals with melting point of 196-198°C. The above compound was identified as (+) usnic acid.18

Effect of (+) usnic acid on pigment production
Pyocyanin extraction method
The test was done in Luria Bertani broth at 37°C for 48 hours.21 Different concentrations of the (+) usnic acid (1000, 500, 250, 125, 62.5, 31.25 and 15.63 µg/ml) from 5 mg/ml stock solution were used to check its effect pigment production in Pseudomonas aeruginosa MTCC 2453. Bacterial suspension without (+) usnic acid retained as a positive control to compare the result after the incubation period. Pyocyanin was extracted using 3 ml of chloroform and then with 1ml of 0.2 N HCl, and absorbance was measured using spectroscopic analysis at 520 nm (Biorad, smart spec 3000).

Quantification of violacein pigment
Chromobacterium violaceum MTCC 2656 was incubated at 30°C in Luria Bertani broth with varying concentrations of (+) usnic acid (1000, 500, 250, 125, 62.5, 31.25 and 15.63µg/ml) for 48 hours in a shaking incubator. The stock solution of (+) usnic acid made at a concentration of 5mg/ml. Broth culture without (+) usnic acid was the control. 1 ml culture from the overnight incubated broth was centrifuged at 8000 gravity for 5 minutes to precipitate the insoluble violacein. I ml of DMSO added after discarding the culture supernatant, and it was vortexed vigorously for 30 seconds and centrifuged at 8000 gravity for 5 minutes to remove the cells. Violacein in the supernatant was quantified by spectroscopic analysis at 585 nm22 (Biorad, smart spec 3000) and inhibition was calculated with respect to control.

Prodigiosin inhibition assay
Serratia marcescens MTCC 8708 was cultivated in Luria Bertani broth with different concentrations of (+) usnic acid (1250, 625, 312.5, 156.25, 78.125, 39.0625 and 15.63 µg/ml) at 30°C for 48 hours. 5 mg/ ml stock solution made to prepare different concentrations of (+) usnic acid. Bacterial suspension without (+) usnic acid kept as a control to compare the pigment production. Cells separated by centrifugation at 10,000 rpm for 10 minutes after the incubation period. Pigment extracted from sediment by using 1 ml of acidified ethanol solution. The pigment concentration was measured at 534 nm by using a spectrophotometer23 (Biorad, smart spec 3000). Fig. 3A. Effect of (+) usnic acid on the violacein production of Chromobacterium- violaceum MTCC 2656 cultures were grown in the presence of different concentrations (µg/ml) of (+) usnic acid. 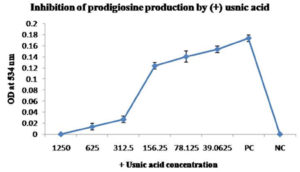 Pseudomonas aeruginosa is an opportunistic pathogen continuing to exist and covering an extensive range of environments. It is strenuous to wipe them out because of the high level of antibiotic resistance due to diverse virulence factors controlled by the quorum sensing mechanism. Violet coloured pigment is a bioactive molecule produced by Chromobacterium violaceum and modulated by quorum sensing, widely accepted as a model organism in quorum sensing studies.24 Even though seldom involved in human infection, infections caused by them are generally lethal. Prodigiosine, the pigment produced by Serratia marcescens, is essential for its pathogenicity. It is under the regulation of the quorum sensing mechanism; hence, the obstruction of pigment production is possible to reduce pathogenicity.25 Therefore, quorum quenching activities gives ground for researchers focusing on an abiding plan to achieve a solution for drug resistance in pathogens by interfering with its quorum sensing mechanism.

Some studies correlated with the natural compounds having harmful antimicrobial effects proved its antivirulence activity by its action against bacterial biofilm formation.26 This study was done to check the ability of (+) usnic acid on pigment production of selected chromogenic bacteria. The various by-products are one of the pathogenicity factors of chromogenic bacteria restrained by the quorum-sensing mechanism. The inhibition of pigment production, thereby decreasing the infective nature of bacteria.

Like plants, lichens are also numerous sources of biologically active compounds. It can live in dreadful conditions due to its slow metabolism, production of specific bioactive molecules and so on. Also, it manifested its potent activity in combination with other therapeutic agents. The biological role of usnic acid varies from species to species and depends on its collection source. The higher minimum inhibitory concentration of usnic acid on Mycobacterium- aureum was eminent compared with the minimum inhibitory concentrations of the standard drugs used. Many studies are available to describe antimicrobial, cytotoxic or anti-inflammatory properties of (+) usnic acid, but their effect on quorum sensing property of bacteria is not studied yet. Hence, the inhibition of pigment leads to the destruction of quorum sensing and reduces the disease-causing ability of bacteria.

A clinical study recorded that the concentration of 50 µM of eugenol has a remarkable effect in reducing pyocyanin production by Pseudomonas aeruginosa.31 Above 100 µg/ml of (+) usnic acid causes a 50% reduction of pyocyanin as observed in a study with Mangiferaindica L, which expressed a 69.7% reduction pyocyanin at 100 µg/ml. It was observed that three phenyls lactic acid repressed the synthesis of pyocyanin.32 Another report found a notable reduction in the pyocyanin on treatment with hordenin, 40% and 80% at 0.5 mg ml-1 and 1.0 mg ml-1 respectively.33 Clove oil caused remarkable inhibition in the production of pyocyanin varies from 37 – 75% at 0.2- 1.6 v/v concentrations.34 In contrast with the past, bacterial resistance to antibiotics is a universal problem. Consequently, there is an increasing demand for the latest anti-infective therapeutics, targeting bacterial behaviours such as quorum sensing instead of bacterial growth. This will reduce the drug resistance and undesirable side effects of certain antibiotics.35

A high concentration of (+) usnic acid (205.26 µg/ml) is required for a 50% reduction of prodigiosin in the present study. It has been already described the action of Anethumgraveolens on the decrease in the prodigiosin produced by Serratia marcescens in the level of 47, 64, 65, 66 and 71% respectively at concentrations of 64, 128, 256, 512 and 1024 µgML-1.36 This result was parallel with the conclusion of the study by N-nonanoylcyclopentylamide, which suppressed 87% of prodigiosin production AT 200µM.37

Usnic acid proved its activity against most Gram-positive organisms, and it has an inhibitory effect on the biofilm produced by gram-positive bacteria. An exciting characteristic showed by (+) usnic acid was its ability to change the morphology of the biofilm produced by Pseudomonas aeruginosa.38 In contrast, there was no antibacterial property at the lower concentration on this bacterium. This experiment established its ability to interfere with signalling molecules in quorum sensing of bacteria, which involves biofilm formation by its effect on morphology of biofilm. An identical type of biofilm morphology seen on the control polymer and the wild type Pseudomonas aeruginosa PA01 compared to biofilm in presence of (+) usnic acid.

P-value is less than 0.05. Hence, we reject the null hypothesis and conclude a high negative correlation between drug concentration & pigment concentration. The property of inhibitory activity on pigment production can make (+) usnic acid an antiquorum sensing agent. It manifested antibacterial activity at higher concentrations only. However, it may be possible to kill antibiotic-resistant bacteria while using it in association with the lower dose of standard antibiotic. Studies should be carried out on this basis, which can be positively incorporated with a reduction in the development of drug resistance. Further studies are required to test the effect of (+) usnic acid on other quorum sensing regulated virulence factors such as biofilm formation and impact on quorum sensing regulated genes to conclude its action as a quorum quenching agent.

ACKNOWLEDGMENTS
The authors are thankful to Dr Ethirajan Sukumar (Former Dean, Department of Research and Development, Saveetha Institute of Medical and Technical Sciences, Chennai), for helping in the materials and methods part.

AVAILABILITY OF DATA
All data sets generated or analysed during this study are included in the manuscript.