The biodegradation of High Density Polyethylene (HDPE) and Low Density Polyethylene (LDPE) by  Aspergillus oryzae  was examined in the current study. The optimal temperature, pH, favorable carbon and nitrogen sources for organism growth were determined. A comparative study of degradation in surface sterilized and palmitic acid treated polyethylenes was done to learn the effect of  the surfactant fatty acid on the polymer. The films degraded by Aspergillus oryzae strain were analyzed by weight loss, FTIR, SEM studies and degree of water absorption (swelling index). The organism showed 33% weight loss of black coloured HDPE and 40% weight loss of green coloured LDPE in 90 days after palmitic acid treatment.

The use of plastics in today’s world has become inevitable. Though life without plastics is unimaginable, its regular use by a population of 7.5 billion of this planet is creating havoc. The organic polymer synthesized from petroleum derivatives is utilized in almost all industries including food industry, pharmaceutical, automobile, electrical and electronics, toy, furniture etc. An accelerated decrease in petroleum products may be attributed to extreme usage of plastics.  This results in diminishing petroleum resources which is non-renewable. Further, accumulation of plastics in the atmosphere leads to disastrous effects.

Plastics cannot be incinerated like other wastes. On burning plastics, substances like dioxins, mercury, furans, halogens which are toxic and carcinogenic are released causing deleterious effects to plants, animals, humans and nature (1). The other options in management of plastics are –  recycling, biodegradation and bioplastics.

Recycling has its own demerits. Recycling of plastics from municipal waste is a very laborious , expensive and time taking process. Since each plastic product differs in its chemistry from others it may interfere in the process of recycling. A proper sorting of plastic products is recommended for recycling. The differing melting temperatures of various kinds of plastics intervene in the procedure which may lead to loss of the product. Further, there are chances of liberation of toxic gases as the plastics are retreated (2).

Bioplastics is the best option to free this atmosphere from ill effects of plastics. Since natural products are used  in the manufacture, the plastic products would readily degrade after disposal. But bioplastics may not be durable like synthetic plastics. Few bioplastics which are degradable by microorganisms are polycaprolactone, poly butyl succinate, poly hydroxy butyrate, polylactides, starch blends (3). Though bioplastics serve as the best option, the synthetic plastics which are already in the atmosphere have to be eliminated. When incineration is harmful and recycling is tedious, biodegradation is the only choice for the decimation of plastics.

Many studies have shown that various microorganisms are capable of deforming the structure of polyethylene, most of them being pathogenic strains belonging to genera – Pseudomonas, Streptococcus, Staphylococcus,  Bacillus, Aspergillus, Fusarium etc. which might in turn lead to infectious diseases (4). Hence there is a need to employ a non pathogen which could efficiently degrade polyethylene.

As per chemical resistance chart provided by Spilltech and Sunwest contianers, US (5,6), on storing palmitic acid in polyethylene bags or containers, physical properties of polyethylene alter as the polymer is not compatible with the fatty acid. On these grounds, palmitic acid has been used as the substrate to pretreat polyethylene before degradation with the organism.

To study the biodegradation , two kinds of commercially available polyethylene bags were chosen – black colored high density polyethylene (HDPE) and green colored low-density polyethylene (LDPE). The fungus, Aspergillus oryzae was isolated from the polyethylene bags buried in the soil for six months. Focus was laid on the fungal strain based on the affinity exhibited by it towards the plastic. The strain was isolated, subcultured and maintained on Potato dextrose medium. The fungus was identified as Aspergillus oryzae by macroscopic, microscopic and molecular characterization.

pH
The favourable pH of the A.oryzae strain was determined by incubating the isolate in Potato dextrose broth at pH ranging from 4 to 8 at 28±2oC for 5 days. The dry mass of the mycelial mat was noted down.

Temperature
The A.oryzae strain was grown in potato dextrose broth for 5 days at different temperatures ranging from 25oC to 45oC to find out its desirable temperature. After 5 days of incubation, the mycelial mat was recovered from the flasks, dried to remove the moisture content and the mycelial masses were noted down.

Sucrose was not added to the medium, unlike the conventional Czapek dox medium, to ensure the nutritional dependence of the organism on carbon content of the polymer.

The various carbon sources used were molasses, potato hydrolysate, dextrose, starch, sucrose, fructose and malt extract in 1% concentration. The nitrogen sources used were peptone, yeast extract, soya meal, ammonium sulfate, urea, beef extract and potassium nitrate in 1% concentration.The flasks were incubated for 5 days. The biomass of A.oryzae was recorded after removing the moisture in them.

Pretreatment of polyethylene bags with ethanol and palmitic acid
The polyethylene bags were cut into 2cm diameter discs. The discs or films were surface sterilized by 80% ethanol for 2 hours, washed with distilled water and dried overnight. The sterile discs of the LDPE and HDPE bags were transferred to 100ml of Potato dextrose broth and Czapek Dox broth (without carbon source, as mentioned in the previous section) separately and inoculated with Aspergillus oryzae for 90 days. The films were intermittently checked for weight loss for every 30 days.

The second set of LDPE and HDPE films were sterilized and pretreated overnight with 1% palmitic acid dissolved in 2-propanol. These films were added to the Potato dextrose broth  and Czapek dox broth and inoculated with Aspergillus oryzae for 90 days. The weight loss of the films was determined for every 30 days.

Biodegradation analysis
Calculation of percentage of weight loss
The polyethylene discs were washed with 2% Sodium dodecyl sulphate for 4 hrs to remove all mycelial debris 7, sterilized with ethanol and finally washed with distilled water before weighing. The percentage weight loss of a mean of five samples has been provided in the results which was calculated using the following formula 8.

Fourier Transform Infrared spectroscopy
FTIR is an effective tool to determine the change, appearance and disappearance of functional groups in a polymer 9. The differences in the structure of surface sterilized polyethylene and palmitic acid treated polyethylene incubated with the fungus were studied after 90 days. The surface sterilized and palmitic acid treated polyethylene samples were placed in the sample holder plate as such and the FTIR analysis (BRUKER model ALPH) with 32 scans in the range of 4000cm-1 to 400cm-1 at a resolution of 2cm-1 was performed. The percentage of transmittance through the polyethylene samples were evaluated by FTIR at signatures of corresponding functional groups. Therefore, a comparative study can be made between the controls and degraded samples for the detection of changes in the functional groups.

Scanning electron microscopy
For SEM investigations, Karl Zeiss instrument was used. The eroded polyethylene specimens were fixed with 2.5% glutaraldehyde in 0.05M cacodylate buffer for 90 minutes at 4oC. The samples were sputter coated for 75 seconds with gold particles after dehydration. The gold coated polymer samples were placed on the microscopic stage to visualize their weathering after incubation with  A.oryzae.

Determination of degree of water absorption by LDPE and HDPE
The ability of the hydrophobic polyethylene films to absorb water after undergoing biodegradation with A.oryzae was studied by Ljerka Kratofil Krehula et al.,2013 method 10. The HDPE and LDPE films, both control and A.oryzae treated samples were weighed before immersing in water. The films were immersed in water for 120 hours at 40oC. The masses of the polymers were measured intermittently at 24 hours, 72 hours and 120 hours. The difference in weights of the samples testifies the uptake of moisture content by the plastics. The degree of water absorption (a) was calculated using the following formula. 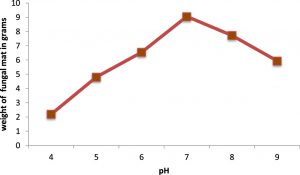 Fig. 2. Effect of pH on growth of A.oryzae 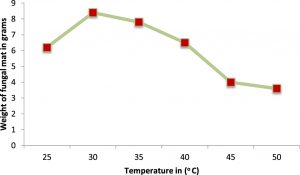 Fig. 3. Effect of temperature on growth of A.oryzae

Fig. 4. Suitable carbon source for the growth  of A.oryzae

Fig. 5. Effect of nitrogen supplementation on growth of A.oryzae

Biodegradation analysis
Weight loss determination
The films of HDPE and LDPE retrieved every 30 days showed a gradual decline in weights. The results are tabulated in Table 1.

On the whole, palmitic acid treated polyethylene incubated with Aspergillus oryzae in Czapek dox medium proved to elevate the rate of degradation. 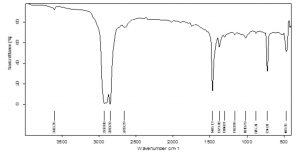 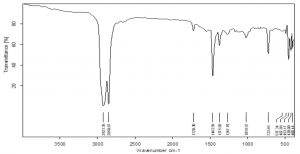 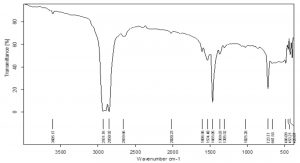 Determination of degree of water absorption by LDPE and HDPE
The uptake of moisture resulted in swelling of the polymer samples which in turn increased their weights. Being hydrophobic, the untreated control samples could not absorb any moisture and hence their masses remained unchanged. The surface sterilized HDPE and LDPE could absorb 9% and 17.6% of water while palmitic acid coated polyethylene films exhibited further rise in their masses. The highest percentage of water absorption in LDPE and HDPE were observed in palmitic acid treated polyethylene after 120 days which was 12.6% in black HDPE and 25% in green LDPE, expressing the ease of water absorption by LDPE than HDPE. The palmitic acid pretreatment of the polymer showed a notable rise in weights after water absorption which might be due to the reduction in interfacial tension and utilization of the fatty acid as substrate for the growth of fungus, thereby accelerating the degradation process. 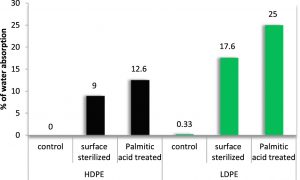 The current paper discusses about, the role of a culture medium and the role of palmitic acid in boosting the  degradation of polyethylene.
A medium used to grow an organism plays a significant role since it decides the metabolic pathway of the organism. Potato dextrose medium is nutritionally rich and is a general purpose medium to grow molds. Therefore, A.oryzae naturally utilized the nutrients available in the medium and showed abundant growth on potato dextrose medium. Though the fungal cultures were observed to grow on the polyethylene discs, the nutrients for the mycobial growth were obtained from the nutrient rich medium. This was not the case with Czapek dox medium which was not supplemented with any carbon source (11,12). Hence it is a compulsion for the fungal isolate to survive on polyethylene.  The degradation results of both LDPE and HDPE by A.oryzae followed the same principle.

The biodegradation studies of HDPE and LDPE by A.oryzae showed higher percentage of degradation after palmitic acid pretreatment. FTIR studies showed the formation of carbonyl groups, alcohols, bending and stretching of C-H bonds confirming the oxidation of polyethylene. SEM studies exposed cracks, fissures and fractures validating the physical damage caused by A.oryzae. The plastic films which are strictly hydrophobic were observed to absorb moisture after immersing them in water for 120 hours.

Aspergillus oryzae is a prospective organism for polyethylene biodegradation. The pretreatment of the polymer with palmitic acid supported the growth of A.oryzae which caused increase of water holding capacity in polyethylene films and further damage of the films led to mass loss, polymer surface erosion, formation and disappearances of functional groups in both kinds of polyethylene. The efficacy of the fungal strain enhanced on treating the films with palmitic acid which acted as a surfactant. The enzyme purification responsible for polyethylene degradation and its storage being complex and expensive, the non pathogenic  Aspergillus oryzae, can be used for the degradation of polyethylene as used in food industry.

Acknowledgements
We thank DST-CURIE laboratory, SPMVV for providing us the instrumental facility required for the study.

Conflict Of Interest
The authors declares that there is no conflict of interests.