Urinary tract infection (UTI) represents a predominant infection in both healthcare settings and community.1 The most common bacterial cause of UTI is Escherichia coli, but many other Enterobacteriaceae such as Klebsiella pneumoniae are also present.2

The Multidrug-resistant (MDR) Enterobacteriaceae is increasing as a cause of UTI.3 Bioﬁlm formation plays a significant role in UTIs.4 When these uropathogens colonize the mucous membrane of the urinary tract, they tend to form biofilm, which favors their persistence for a long time. In addition, microbial biofilms are impermeable to many antibiotics that contribute to the development of MDR bacteria.5

Fluoroquinolones (FQs) represent one of first-line agents for UTI empirical therapy.6 Efflux pumps (EPs); QepA and oqxAB are important contributors of quinolones resistance in Enterobacteriaceae including E. coli, Klebsiella spp. These pumps actively extrude FQs from the cytoplasm. QepA is a proton-dependent transporter that belongs to the superfamily of major facilitators. QepA promotes resistance to quinolone,7 whereas OqxAB is a multidrug efflux pump with transmissible resistance-nodulation division that decreases bacterial susceptibility to ciprofloxacin (CIP).8

These EPs can be blocked by in vitro inhibitors such as carbonyl cyanide 3-chlorophenylhydrazone (CCCP). The effect of EP inhibitor CCCP against resistant Gram-negative bacteria has been investigated.9 This study was aimed at finding out the role of EP in CIP resistance of E. coli and K. pneumoniae causing hospital acquired UTI. In addition, the prevalence of plasmid-mediated EP genes, biofilm, and the anti-biofilm effect of CCCP against these isolates were investigated.

Bacterial Identification
A Prospective cross-sectional study was carried out for 18 months from March 2019 to August 2020 in Mansoura University hospitals (MUHs), Mansoura, Egypt. The Institutional Research Board at faculty of medicine, Mansoura University has approved this study (with a code number R.21.09.1463). Each patient included in this study signed an informed consent. Urine samples were collected from patients with suspected UTIs. Cystine–lactose–electrolyte-deficient (CLED) agar (Oxoid- UK) plates were used to culture collected urine samples according to method described before.10

The MIC decrease factor (MDF) was calculated for each isolate using this formula; MDF = CIP MIC in the absence of CCCP/ CIP MIC in presence of CCCP.14 With MDF value of 4 or above, significant inhibition of EP by CCCP was considered (in the presence of CCCP, the CIP MIC drops fourfold or more).14

Plasmid Mediated EP Genes
Plasmid EP genes were assessed in CIP resistant isolates as previously described by two PCR: one PCR for oqxAB genes7 and the other PCR for the detection of qep A gene8 (Table 1).

Biofilm formation assays were performed for CIP resistant isolates as previously described.15 Overnight culture of isolates was adjusted to turbidity 0.5 McFarland standard. Then for each isolate, 125 microliters of 1:100 diluted bacterial suspensions were put in sterile flat-bottomed 96-well microtiter plates and incubated at 37°C for 24 hours. The wells were washed thrice with 300 mL of sterile phosphate buffered saline (PH 7.3) and dried inverted at room temperature. For staining of the formed biofilm, 125 µL crystal violet of 0.1 percent was added for 10–15 minutes followed by rinsing with distilled water for three times. Uninoculated medium was used as control. The experiment was done in triplicates. A microtiter plate was read at the optical density (OD) 600 nm. The strains were then categorized using the following criteria: The cut-off OD (ODc)= mean OD of the negative control+ three standard deviations (SD). Biofilm were classified as strong biofilm producer when (OD more than 4×ODc); OD of non biofilm producer (OD equal to or less than ODc); weak biofilm producer (ODc< OD≤2x ODc); moderate biofilm producer (2 x ODc< OD≤4 x ODc).16

The Effect of Sub-MICs of CCCP on Biofilm Formation

The effect of CCCP on the formation of biofilm were assessed on strong biofilm producing CIP resistant isolates of K. pneumoniae and E. coli.

The biofilm assays were done as above but with the addition of sub MIC CCCP concentration of each strain compared to biofilm formation in absence of CCCP as control. The microtitre plate was read at the OD600nm after 24 h incubation at 37°C.

Ciprofloxacin MIC values of isolated E. coli and K. pneumoniae ranged from 0.125 to 256 mg/L using the broth microdilution method. One hundred and three isolates were CIP resistant. CIP MIC estimates ranged from 1–256 mg/L. Sixty-four isolates (62.1%)of the isolates were high-level CIP resistance (MIC ≥ 32 mg/L), the MIC 50 and MIC90 were 32 mg/L and 256 mg/L, respectively.

Reduction of fourfold or more CIP MIC in the presence of CCCP (MDF value of higher than 4) was detected in 57(55.3%) CIP resistant isolates. 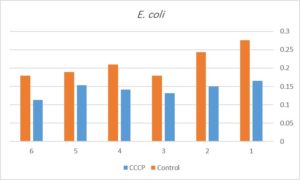 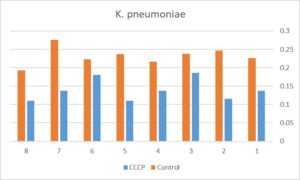 Figure 3. Impact of CCCP on the biofilm formation after 24h of incubation compared to control (a) E. coli (b) K. pneumoniae

Treatment of MDR bacteria in UTI represents a challenge in healthcare settings.3 MDR organisms expressed simultaneous resistance to common antibiotics that are used in the treatment of UTI such as aminoglycosides, beta-lactams and FQs that are considered a great concern.17 Plasmid exchange of resistance aggravates the problem and represents major threat to health care system.18 In this study, 93% and 95% of isolated urinary E. coli and K. pneumoniae were MDR, respectively. Similar high percentage of MDR in uropathogenic E. coli in a study that was conducted in Egypt, 90.85% were MDR,19 but lower percentage of MDR E. coli was reported in previous studies in Saudi arabia20 and Australia.21

Resistance to broad spectrum 2nd generation (Cefuroxime) cephalosporin and amoxicillin-clavulanic acid was found to be the highest in uropathogenic E. coli representing (86.4%, 76.1%) and in K. pneumoniae representing (76.1%, 78.9%). Resistance to 3rd generation cephalosporin cefotaxime and ceftazidime in E. coli was 75%and 68.2%, respectively and in K. pneumoniae was 71.8% and 77.5%, respectively. Imipenem resistance was presented in about forty percentages (43.2%) of isolated uropathogenic E. coli and about seventy percentages (72.5%) of K. pneumoniae isolates.

Resistance to beta lactam antibiotics is a global phenomenon, but occurrence rates are variable. Matching with the result of this study, high resistance rate to 2nd and 3rd generations cephalosporin was found by Tandogdu22 in Klebsiella and by Esmaeel et al.23 in uropathogenic E. coli isolates in Egypt. Similarly, high prevalence of amoxicillin–clavulanic acid resistance was detected in K. pneumoniae,24 and in E. coli in Asian area.22 However, lower rate of resistance was detected in K. pneumoniae in Tunisia.25

This high rate of resistance in this study to beta-lactam antibiotics and FQ could be due to their wide use as an empirical therapy for community acquired UTIs and gastrointestinal infection representing a selective pressure for development of resistance in patient’s flora, which represents the main source of UTI infection. In addition, the use of these agents empirically to treat UTIs with the absence of antibiotic policy in the hospital may represent another factor for this high rate of resistance.27

Numerous mechanisms are responsible for FQ resistance for example decreases in membrane permeability, efflux systems, and topoisomerase mutations.28 EP genes that transfer quinolones outside the bacterial cytoplasm are involved in plasmid-mediated quinolone resistance. Two of them are well known; qepAB and oqxAB.29 By transporting antibiotics across the membrane, these EP systems OqxAB increased CIP and norfloxacin MICs 32- and 64-fold, respectively, above the control strain. Because OqxAB conferred CIP resistance on other Enterobacteriaceae, the spread of this FQ resistance mechanism is very likely.

The efflux systems as a cause of drug resistance in Enterobacteriaceae is growing.9 EP inhibitor CCCP was used to reveal the contribution of EPs in CIP resistance and MIC of CIP was assessed in the presence of sub-inhibitory concentrations of CCCP. Reduction in CIP MIC (MDF ≥ 4) was as a principle for significance, efflux activity was present in 57 (55.3%) of CIP resistant isolates. Likewise, the role drug EP was detected in 47.5% of CIP resistant isolates of K. pneumoniae.31 While the role of EP was at lower rate that range from 12.1% and 18.3% of isolates of Enterobacteriaceae in other study.14 Higher rate of EP inhibition by CCCP was previously reported with CIP MIC reduction ranged from 2-64 fold in 93% of MDR k. pneumoniae.32

In this study, biofilm was produced in 60% and 75.5% of quinolone resistant E. coli and K. pneumoniae, respectively. A similar higher rate was reported in Egypt,19 Ethiopia36 and Iran,37 while, a lower rate of biofilm production Klebsiella and E. coli was also described.38,39

CIP resistance in hospital acquired uropathogenic E. coli and K. pneumoniae is of high prevalence and plasmid mediated EP is of rising concern. Biofilm development is a critical virulence determinant in these organisms. EP inhibitor CCCP represents a possible option to decrease the biofilm formation in these resistant urinary pathogens.

AUTHORS’ CONTRIBUTION
RE designed the study. RE and GM conducted experiments. RE wrote the draft manuscript. RE and GM wrote and revised the manuscript. Both authors read and approved the final manuscript for publication.

ETHICS STATEMENT
The Institutional Research Board at faculty of Medicine, Mansoura University approved this study with code number R.21.09.1463.