Soy sauce, a salty condiment with nutrient rich fermented food, has been a popular cuisine in Asian countries like China, Korea, and Japan for thousands of years. Different techniques have been implied to enrich the nutrient potentials of soy sauce. The objective of this study was to enhance the antioxidative value of the soy sauce using enzymatic hydrolysates of roasted Eupolyphaga sinensis (ES), a useful insect in Chinese traditional medicine. The optimal hydrolysis conditions of roasted ES were 300 U/g of arazyme dosage, 4 h of hydrolysis duration, and 1:25 of material/water ratio. The DPPH scavenging activity and peptide content of the soy sauce reached 75.69% and 145.19 mg/mL, respectively, when 8% hydrolysates of ES were added at late-fermentation period. Soluble unsalted solid, amino acid nitrogen, and total nitrogen were reached to 22.1 g/100mL, 0.68 g/100mL, and 1.75 g/100mL, respectively. Free amino acid and element content were increased compared to the control, while sodium content reduced significantly (p<0.05). The results showed that the novel soy sauce fermented with enzymatic hydrolysates of ES was an antioxidant rich high quality product. This study may help food industries to produce a novel antioxidative soy sauce.

Soy sauce is a salty condiment with unique color, aroma, and flavor, as well as nutrient rich fermented food. It has been a popular cuisine in Asian countries like China, Korea, and Japan for thousands of years. Studies have reported antioxidant, hypotensive, and anticancer potentials of soy sauce in addition to adjust the taste [1-3]. Production of soy sauce in China is more than half of the world [4]. There are mainly two processes in production of soy sauce in China that include low salt solid state fermentation and high salt dilute state fermentation. Soy sauce made of the former process has advantage of higher production over the traditional process per unit time [5]. However, it leads to products of considerably poor quality. Furthermore, single species of soy sauce in market cannot meet the market demand.

Eupolyphaga sinensis (ES) is an edible insect having medicinal value in China. Out of the 18 amino acids found in ES, the eight essential amino acids constitute 34.5% of total amino acids [6]. It is used to treat traumatic injury as traditional Chinese medicine [7]. It has also been reported to have anticancer, anti-thrombosis, and immunomodulatory properties [8,9].

Different techniques have been implied to enrich the nutrient potentials of soy sauce. Soy sauce has been fortified with various iron sources [14] and NaFeEDTA [15]. Since ES is an edible medicinal insect in China, the objective of this study was to develop a low salt solid state soy sauce supplemented with hydrolysates of roasted ES (HRES) during the fermentation process to increase antioxidant activity and improve quality. People are becoming health conscious and prefer foods having additive functional values; therefore, it is meaningful to develop health promoting soy sauce [16].

where; A0, A1, and A2 are absorbance of DPPH without sample, sample and DPPH, and sample without DPPH, respectively.

Production of soy sauce supplemented with ES-derived antioxidant peptides
A mixture (3 kg) of soybean meal and bran in ratio of 1.2:1 was soaked into 12 °Be brine (1.8 kg). The mixture was steamed at 2 atm for 30 min and then cooled down below 40°C. Aspergillus oryzae (20% of the mixture w/w) was inoculated to the mixture and kept for 36 h at 36°C for making Koji. Later, 12 °Be brine (1.8 kg) was added in the Koji. Morori was fermented at 42-45°C for first 10 d then at 45-50°C for last 10 d. In the production of low salt solid state soy sauce, Morori is produced by stirring brine and Koji. The final product, soy sauce supplemented with ES-derived antioxidant peptides (SSSEAP), was obtained by lixiviation, autoclaving, and precipitating [21].

Sensory evaluation
In order to evaluate the sensory quality of SSSEAP, 10 subjects who accepted basic taste test and had good ability of classification were employed. A total of 100 points was assigned for 4 sensory properties: 20 points for color, 30 for aroma, 40 for flavor, and 10 for appearance. The subjects scored the samples based on their personal evaluation.

Determination of soluble unsalted solids
Soluble unsalted solids were determined according to Miyagi et al. [23] with some modifications. Sample was shaken thoroughly and filtered through dried filter paper into an Erlenmeyer flask, 10 mL filtered sample was drawn into 100 mL volumetric flask, then distilled water was added in volumetric flask to make 100 mL. The diluted sample was dried in drying oven at 103°C until constant weight was found. The sample was referred as soluble total solid was allowed to cool at room temperature. Meanwhile, another diluted sample was titrated using 0.1N of silver nitrate solution with potassium chromate as indicator.  Sodium chloride was quantified based on the volume of silver nitrate solution consumed. Blank test was carried out at the same conditions. Soluble unsalted solids were calculated by subtracting sodium chloride from soluble total solids.

Determination of total nitrogen
Total nitrogen was determined according to Kjeldahl method [25]. Two milliliter of sample was mixed with 8 mL of concentrated sulfuric acid in Kjeldahl flask and 5 g of copper sulfate/potassium sulfate with ratio of 3:50 was added to the mixture. The mixture was heated until carbide granules vanished and digestive solution became pale green. After cooling down, 40 mL of 40% sodium hydroxide was added to distill the ammonia in mixture. Ammonia was absorbed by 35 mL of boric acid (4%) solution with methyl red- bromocresol green indicator in conical flask. Hydrochloric acid (0.1N) was used to adjust boric acid absorption solution and record the consumption of hydrochloric acid to determine total nitrogen. Blank test was carried out at the same time.

Statistical analysis
The results are expressed as means of triplicate measurements unless otherwise mentioned. The data were analyzed using analysis of variance (ANOVA) and significant differences among treatment means were identified using Tukey test at p<0.05.

Comparison of papain and arazyme on hydrolysis of ES
The peptide obtained from hydrolysis using arazyme (36.24 mg/mL) was significantly (p<0.05) higher than that obtained using papain (Fig. 1A). The DPPH free radical scavenging activity of hydrolysates derived by using arazyme was 2.34 times higher than those obtained by using papain (Fig. 1B). Therefore, arazyme was selected to produce HRES and further experiments were carried out accordingly. 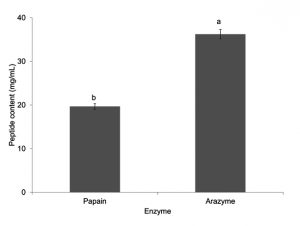 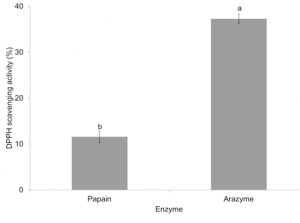 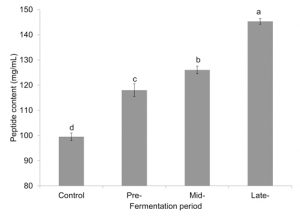 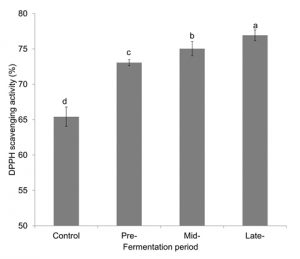 Sensory quality of SSSEAP
The highest score for sensory properties of SSSEAP reached when 8% HRES was added (data not shown). The soy sauce was bright red-brown, shiny, mellow, and clarified without any bad smell. The taste was also delicious and moderate salty. The second best was the soy sauce with a supplement of 13% HRES, followed by the 17% and 21% of HRES composition. When the added amount was increased to 21%, the taste became very light. Since the scores of sensory quality between the additions of 8% and 13% of HRES were very close, 8% of addition amount was considered for subsequent test. 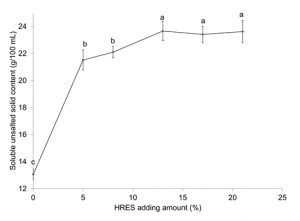 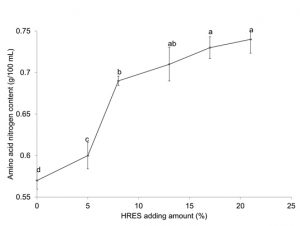 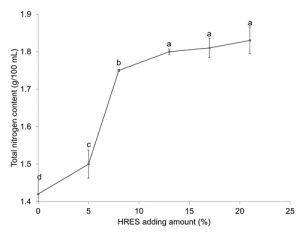 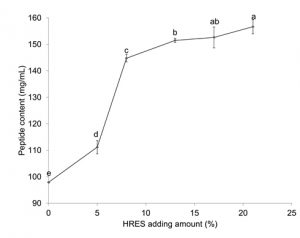 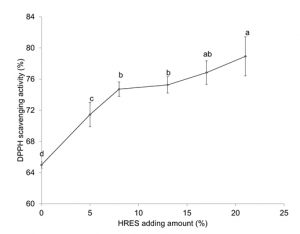 Effect of HRES amount on peptide content and DPPH scavenging activity of SSSEAP
Peptide content of SSSEAP was increased considerably with the increasing amounts of HRES (Fig. 3D). It was increased rapidly from 0-8% and after 13% was slowed down. It reached to 145.19 mg/mL when the soy sauce supplemented with 21% HRES and was 1.6 times more than the control. The DPPH radical scavenging activity of SSSEAP increased (75.69%) as compared to that of control (65.20%) when 20% of HRES was added (Fig. 3E).

Papain is derived from plants and is widely used as meat tenderizer, while arazyme is an efficient protease from insect. They were used in the present study for hydrolysis of roasted ES and their effects were assayed. HRES itself contains a large amount of peptide which could contribute to the higher peptide content in SSSEAP [13]. It is comprehensively used to evaluate antioxidant capacity in food industry. DPPH free-radical scavenging activity assay can be used for the primary characterization of the antioxidant potential of any food materials. The results of DPPH indicated that antioxidant activity of peptides was associated with amino acid sequence [28]. In addition; the fermentation process of SSSEAP, after adding HEES, may also release a lot of antioxidants to remove DPPH free radicals. Hence, SSSEAP contains higher peptide and stronger DPPH scavenging capacity than the soy sauce without HRES added during fermentation period. Peptide content of soy sauce with HRES added at late-fermentation stage was 1.46 times higher than that of control. Fermentation also can be divided into pre, main, and late fermentation. HRES was hydrolyzed by proteinase in pre and main fermentation period, which leads to a lower peptide content compared to the late fermentation. The changes in antioxidant activity could be attributed to variations in peptide content by adding HRES at different fermentation stages. The result corresponds to previous study [29].

Sensory evaluation is a widely used method for determining the food quality. Light taste of soy sauce with the increased amount of HRES may be due to the reason that the HRES was converted into a number of bitter peptides during the soy sauce fermentation period because enzymatic hydrolysis frequently results in bitter taste [30]. The soy sauce itself is a spice with sour, sweet, bitter, umami, and salty tastes. These ingredients of tastes, except salt, are generated a lot in the form of soluble solid during the fermentation process. The amount of soluble unsalted solid, an important indicator of the quality of soy sauce judgment, refers to a difference derived after subtracting the salt content in the soy sauce. The amount of soluble unsalted solid in HRES added soy sauce in the present study was significant increased indicated high quality soy sauce could be produced.

During fermentation, amino acid nitrogen content is an important characteristic index of soy sauce [26]. It reflects the level of umami flavor and quality of soy sauce. Higher amount of amino acid nitrogen content in the HRES added soy sauce may be because of Maillard reaction [31]. The peptides produced during fermentation of HRES added soy sauce can not only give more delicious taste, but also improve the nutritional value of the soy sauce. In recent years, it has been reported that ES has anithrombotic, antitumor, immune-protective, and antioxidant properties [9,32,33].

Amino acid nitrogen, one of the most important indicators of soy sauce quality, determines the quality grade of soy sauce in China [24]. The higher the nitrogen content in soy sauce, the higher the utilization of protein is, the better the quality is. Based on the Chinese standard of fermented soy sauce GB 18186-2000, SSSEAP could be classified into the first-class level by the evaluation of nitrogen content. The nutritional value of food protein depends largely on the amount and proportion of the essential amino acids that they provided for the synthesis of nitrogenous compounds [34]. Amino acids composition of SSSEAP also meets the FAO/WHO standard as it is recommended that the ideal protein pattern is the essential amino acids need to be around 40% of total amino acids. Aspartic acid, glutamic acid, glycine, and alanine could affect the umami and sweetness of the products, and these 4 amino acids were called umami amino acids [34]. The improvement of umami might be caused by free umami amino acids from ES, and it perhaps also depends on the composition and content of those amino acids. The results may infer that the amino acids of ES have an important contribution to taste composition of soy sauce.

Soy sauce is a salty seasoning having good nutrients profile. However, if the intake of sodium is too high, the osmotic pressure of extracellular fluid will be elevated, causing increased blood sodium, and aggravation of heart and kidney’s burden, leading to high blood pressure and heart diseases [36]. The soy sauce produced by using enzymatic hydrolysates of ES contained significantly low sodium than that in the control sample. The most abundant elements in SSSEAP was potassium and phosphorus as in the ES [26].