Home Vol 11 Issue 1 Development and Quality Evaluation of Multigrain Based Biscuit and their Sensory Characteristics...

Experiments were conducted for development, quality evaluation and storage
stability of multigrain flour biscuits made of different flours i.e, wheat flour, maize flour, barley flour, pearl millet flour and gram flour. The biscuits were formulated by taking different treatments and at different proportion of multigrain flours in the ratio of (C) 100:0:0:0:0, (S• ) 90:2.5:2.5:2.5:2.5, (S‚ ) 80:5.0:5.0:5.0:5.0 and (Sƒ ) 70:7.5:7.5:7.5:7.5, respectively. Biscuits were packaged in Low density polyethylene after preparation. All the samples were stored at room temperature for 30 and 60 days for quality evaluation. Sensory evaluation results were determined on the basis of the hedonic table. Results of the study revealed that the control sample were awarded overall score of 7.00 (like slightly) and biscuits prepared in the various flour ratio (S• ) 2.5%, (S‚ ) 5% and (Sƒ ) 7.5% were rated as 7.45 (like moderately), 7.80 (like very much) and 8.00 (like very much) respectively just after baking.

The bakery industry in India is the biggest in food industry. It witnesses tremendous growth with the changing demographics and an improvement in the quality of life of urban people & rural people. Bakery is a traditional activity and occupies an important place in food processing industry. Despite the advent of fully automatic and semi-automatic bread as well as biscuit making Plants, a sizeable number of people still prefer fresh bread and other products from bakery. The bakery industry in India can be categorized into the three broad segments of bread, biscuits and cake. The demand for processed foods is ever increasing due to the technological, industrial and economic advances of the developing societies of the world including India. The two major bakery industries namely bread and biscuits account for almost 82 per cent of the total bakery products. The annual production of bakery products is estimated to be more than 3.0 million tons (www.biscuitfederation.org).

The demand for fibre-enriched baked products to increase the consumption of dietary fibre and also to decrease the caloric density of the baked goods is getting importance. Consumption of dietary fibre is associated with various health benefits like lowering of cholesterol, glycemic index level, colon cancer, bowel disorders and to improve lipid metabolism. Use of grains or a combination of one or two grains, legumes, and oilseeds is a recent trend in the baking industry as it gives multiple health benefits apart from improved taste, aroma, appearance and variety. Earlier, many authors have used protein and fibre rich ingredients to improve the nutritional quality of biscuits. Combination of cereals, pulses and oil seeds will give the combined effect of increased quality protein and dietary fibre in the end product.

The experiments were conducted to develop multigrain biscuits and its sensory quality during storage. Multigrain flour comprising wheat flour, maize flour, barley flour, pearl millet flour and gram flours were used for the present study. The biscuits were formulated using various proportions of flours and other ingredients. All the experiments were conducted in food analysis laboratory and bakery laboratory in the department of Agricultural Engineering and Food Technology. Multigrain biscuits were packed in LDPE packages at room temperature. The sensory characteristics were done on the basis of color, flavor, taste, texture and overall acceptability,just after preparation of biscuits and during storage for 60 days. The study aimed to explore the potentials of development of multigrain biscuits and storage stability.

Multigrain biscuits were prepared by incorporating different levels of flours viz., wheat flour, maize flour, millet flour, barley flour, gram flour blends in ratio of 100:0:0:0:0, 90: 2.5:2.5:2.5:2.5, 80:5:5:5:5, 70:7.5:7.5:7.5:7.5 respectively. The recipe used for preparation of multigrain biscuits is 100 g flour, 45 g sugar, 45 g ghee, milk powder 10 g, 1.5 g baking powder, water and flavor. All the materials were mixed by hand until firm dough was formed. The dough was rolled out in a baking tray and cut into round in shape with a mould. The biscuits were placed in greased aluminum trays and baked in convection oven at 150 ºC for 25 – 30 minutes. After baking the biscuits were taken out of oven and cooled at room temperature. At last, the cooled biscuits were packed into LDPE bags and stored under ambient condition for further studies. Process flow diagram for the production of multigrain biscuits is shown in fig 1.0.

The studies were conducted on development and quality evaluation of multigrain biscuits by incorporating various proportions of flours .eg, wheat flour, maize flour, millet flour, barley flour, gram flour. The quality of the fresh multigrain biscuits were evaluated on thesensory evaluation was done on the basis of color, flavor, taste, texture and overall acceptability. All the biscuit samples were packed in the LDPE and were analyzed during the 60 days of ambient storage condition.

Sensory characteristics of the all four samples were determined by taking the sensory attributes flavour, colour, taste, texture, and overall acceptability. Sensory attributes of all kind of samples were evaluated in fresh condition and after 60 days of ambient storage. Hedonic rating test method was used for the evaluation of different samples in fresh condition and in stored condition had been presents in Fig. 2. Overall acceptability was calculated by taking average of all the scores of sensorial attributes. The study was conducted under ambient condition and related evaluations were conducted after every 30 days.

The sensory data for changes in color score of biscuits during storage are presented in Fig. 3. Result of the study revealed that the fresh samples having single wheat flour biscuits were awarded color score of 8.00. However samples prepared with 2.5%, 5% and 7.5% mixed flour biscuits rated as 8.00, 8.00 and 8.00 respectively for fresh sample at the time of storage. It is therefore, explicit that the fresh biscuits are prepared with only wheat flour based to obtain the maximum score of 8.00, whereas the minimum score 8.00 (like slightly) was awarded to that sample which had 2.5% mixed flour based biscuits. In general, significant decrement in color score was observed for all the samples with few exceptions during storage.

It was also found that the control sample at 0 days they were not packed had initial score of 8.00 which further decreased to 8.00 and 7.00 after 30 and 60 days of storage respectively. Similar trends were also obtained for the other mixed flour based biscuits combination. Probably the addition of different flours in wheat flour was to 2.5%, 5% and 7.5% result in the color shift of biscuits toward dark. The color characteristics of biscuits showed to be darker with increase in concentration of different level of flours.

The sensory data for changes in texture score of biscuits during ambient storage are presented in Fig. 4. Result of the study revealed that the control biscuits were awarded texture score of 8.00 (like moderately). However samples of biscuits prepared with 2.5%, 5% and 7.5% mixed flour were rated as 8.00 (like very much), 8.00 (like extremely), and 7.00 (like moderately) respectively for fresh baked biscuits at the time of packaging. It is therefore explicit that the fresh baked biscuits prepared with 7% level of other mixed with wheat 7.00. Whereas the minimum score of 5.50 was awarded to 7% mixed flour with wheat flour biscuits after 60 days of ambient storage at room temperature in LDPE. 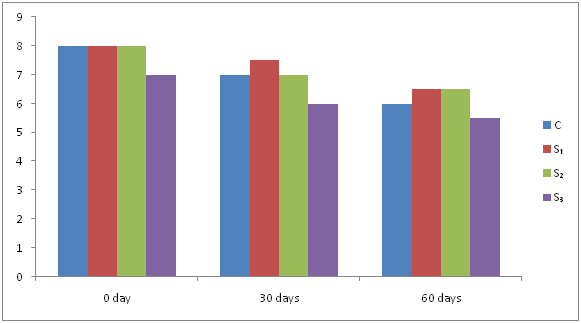 The sensory data for changes in taste score of biscuits during ambient storage are given in the Table 4.16. Result of the study revealed that the fresh prepared control samples were awarded taste score 7.50 (like. However fresh sample of biscuits prepared with 2.5%, 5% and 7.5% mixed flour were rated at 8.00 (like very much), 8.50 (like extremely) and 8.00 (like moderately), respectively. It is therefore explicit that the fresh baked biscuits prepared with 5% level of each flour mixed with white flour obtained the maximum score 8.50. Whereas the minimum score of 6.00 was awarded to control biscuits after 60 days of storage at room temperature. The fresh biscuits baked with 5% of each flour mixed with wheat flour, packaged in LDPE and stored at room temperature had initial score of 8.50 which decreased to 7.50 and 6.00 after 30 and 60 days of storage respectively. Similar trends were also obtained for the other combination 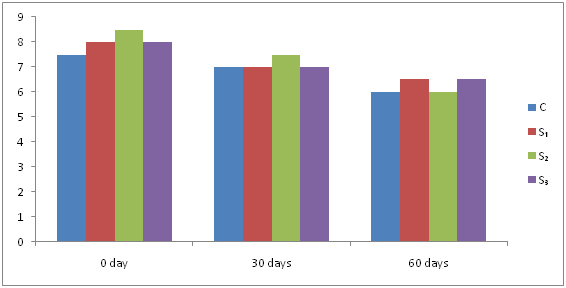 The sensory data for overall acceptability of biscuits are presented in Table 4.17. Result of the study revealed that the 7.5% sample were awarded overall score of 8.00 (like slightly). However biscuits prepared in the flour ratio control, 2.5% and 5% were rated as 7.00 (like moderately), 7.45 (like very much) and 7.80 (like moderately) respectively just after baking. It is therefore; explicit that the 7.5% biscuits were prepared the 8.00. Whereas the minimum score of 6.25 (like slightly) was awarded for control flour biscuits after 60 days of storage in room temperature in LDPE.