Bacterial lipases are the most important collection of biocatalysts used for a variety of biotechnological applications. In the current study the morphological, biochemical and Molecular characteristics to the extracellular lipase producing bacteria were identified. The bacterial isolates were selected as lipase producing bacteria using Rhodamine-B agar plate. the  production of Lipase from the organism were determined with varying incubation temperature (20 to 50°C) and range of incubation time (16-120) hrs. 16 bacterial isolates were identified as Staphylococcus hemolytic. One isolate “St1” was identified By comparing the observed DNA sequences of these local samples with the retrieved DNA sequences (GenBank acc. MG595372.1) as showed high lipase activity according to experimental conditions about 140  U/ml. The current study showed that enzymatic activity of crude lipase extract was maximum in 72 hrs incubation period and 37°C.

Lipases were occupied a special situation as biotechnologically valuable enzymes and display vital roles in various industries1. Lipases occur widely in nature and only microbial lipases are substantial. Microbial lipases are often more useful than enzymes derived from plants or animals because of the great variety of catalytic activities available, the high yields possible, ease of genetic manipulation, regular supply due to absence of seasonal fluctuations and rapid growth of microorganisms on inexpensive media2. Lipase is an enzyme with considerable commercial and industrial importance. Lipase (triacylglycerol acyl hydrolases (E.C.3.1.1.3) belongs to the class of hydrolases which catalyze the hydrolysis of triglycerides to glycerol and free fatty acids over an oil-water interface3. Lipases catalyze the reverse reactions in the synthesis of esters (triacylglycerols) consist of glycerol and fatty acids of long-chain in non-aqueous circumstances4. The activities of All lipolytic enzymes are depended on the pattern of α/β- hydrolase fold, However, the lipases from microbial origin specially show a distinctive folding design of α/β- hydrolase fold5,6. The greater part of industrial enzymes are produced from microbial source, they are more stable and constitute a superior diversity of catalytic actions7.

Staphylococci spp. release extracellular lipases in a fermentation medium were encompassed remedying and degrading enzymes in the environments8. The present study aimed to determine the production of lipase from bacterial isolates by investigation the produced lipase from clinical specimens and determination its activity in these isolates.

Isolation of lipase producing isolates
The clinical isolates included in the present study were collected within a one-month period. The isolates were obtain from unite of clinical microbiology in the hospital training in the governorate. These isolates were taken from primary isolation plates set up on solid media such as blood agar, MacConkey agar and mannitol salt agar. The bacterial colonies which observed on nutrient agar medium were isolated to identification and selected for screening lipase activity9.

Identification of bacterial isolates
The morphological, biochemical and genetic features of isolates were identified according to Bergey’s manual of determinative bacteriology.

DNA Sequencing of PCR amplicons
The bacterial isolate which shows maximal lipase activity on ROA plates assay is considered as positive colonies for lipase enzyme production, the isolates were identified according to molecular genetic study by using of 16SrRNA gene sequencing.

The resolved PCR amplicons were sequenced from both termini of forward and reverse based to the sequencing company instruction manuals (Macrogen Inc. Geumchen, Seoul, South Korea). By comparing the observed DNA sequences of local bacterial samples with the retrieved neighboring DNA sequences of the NCBI Blastn engine.

The results of the PCR products sequencing of the isolate was analyzed as long as with the respective sequences in the reference database. The observed variations in each sequenced sample were numbered in PCR amplicons as well as in its corresponding position within the referring genome.

A specific comprehensive bacterial tree was constructed in this study according to the protocol described by10. The observed bacterial variants were compared by reference sequences neighbor homologous by means of NCBI-BLASTn server11. Then, the results of BLAST of the observed variations were linked and aligned together using a Clustal Omega based tools. A full inclusive tree, including the observed variant, was imagined according to (http://tree.bio.ed.ac.uk/software/figtree/)12.

Lipase producing bacteria investigation
The Rhodamine B- olive oil-agar medium (ROA) was used to select the lipase producing isolates. The medium was prepared according to13. The isolates were identified after 48h of incubation at 37°C and exposed to U.V. light at 350 nm14. The isolates were culture overnight in liquid medium was prepared according to15.

The standard liquid medium for measurement the lipase activity according16 use for culturing lipase producing bacteria. the broth media were inoculated of 5% overnight culture media of all the lipase producing isolates was prepared according to17, the medium consist of (g/L): yeast extract, 2.5; pepton, 5.5; NaCl, 10 and 1% olive oil, autoclaving at 121°C for 15 min. The media incubated at 150 rpm, 37°C and pH value 6 18.

Lipase crude extraction
The crude lipase was extracted according to16.

Lipase assay
The titrimeteric method was used to measure the activity of lipase based on18. using olive oil as substrate.

The laboratory and genetic identification
The technique of Enrichment culture enable the isolation strains of bacteria from different source. The results in the current study appear that the supposed isolate was Staphylococcus hemolytic according to its’ identifying as Gram positive, cocci in clusters and tests made for catalase and coagulase production, allowing the coagulase-positive staphylococci to be identified quickly20.

Within this locus, The sample was included in the present study that had shown to amplify 1429 bp genetic sequences in Staphylococcus haemolyticus genome. The sequencing reactions indicated that the exact identity after performing NCBI blastn for these PCR amplicons “https://blast.ncbi.nlm.nih.gov/Blast.cgi?PAGE_TYPE=BlastSearch”. Concerning the supposed ribosomal 1429 bp amplicons, NCBI BLASTn engine shown about 100% sequences similarities between the sequenced samples and the intended reference target sequences. By comparing the observed DNA sequences of these local samples with the retrieved DNA sequences (GenBank acc. MG595372.1), the approximate positions and other details of the retrieved PCR fragments were identified (Fig. 1).

Table (1):
The position and length of the 1429 bp PCR amplicons used to amplify a portion of 16S rRNA locus of Staphylococcus haemolyticus genomic DNA sequences (GenBank acc no. MG595372.1).

The alignment results of the 1429 bp samples revealed the absence of any detected polymorphism in this position in the investigated sample in comparison with the referring reference DNA sequences (Fig. 2). Fig. 2. DNA sequences alignment of the local sample of 16S rRNA with their corresponding reference sequences of the 1429 bp amplicons within Staphylococcus haemolyticus genomic DNA.

A comprehensive phylogenetic tree was constructed, (65) sequences were comprised the total number of the aligned nucleic acid sequences, irrespective of the investigated local bacterial variant. The total number of the included species within this tree was made of six species within Staphylococcus genus, namely S. haemolyticus, S. gallinarium, S. arlettae, S. xylosus, S. succinus, and S. saprophyticus. Though the current constructed comprehensive tree indicated the presence of several species one, one genus was detected allover this comprehensive tree (Figure 3). However, it was revealed that the investigated St1 was positioned in a unique position beside KT026096.1 and AB726090.1 accession number which they belonged to S. haemolyticus and S. gallinarium respectively. This observation gave another confirmed ideation with regard to the accurate identity of S. hamelotyicus. However, the unique position occupied by the observed S1 between S. haemolyticus and S. gallinarium has indicated a particular positioning of the St1 in terms of its phylogenetic association with the other related species within the Staphylococcus genus. However, this multi-species positioning did not mean the inability of this 16S- based ribosomal amplicon in the detection of the mainly targeted S. haemolyticus species. Moreover, the currently utilized ribosomal primers may not reflect high specificity of the targeted site as five other non-targeted organisms were revealed in the immediate vicinity to the investigated St1 isolate. This is due to the fact that St1 has characterized with unique nucleic acid sequences that made it localize in this phylogenetic position beside several related nucleic acid sequences that are belonging to other organisms of the same genus. Fig. 3. The comprehensive phylogenetic tree of the 16S rRNA genetic fragments for Staphylococcus haemolyticus local isolates. The black color and arrows refer to the sequenced query local samples, while other colors refer to other referring NCBI Staphylococcus deposited referring species.

The investigation of lipase activity to the screened isolates were showed in table 2 and Fig. 4, It appears that the colonies with lipolytic activity showed orange florescence halos after growth on Rhodamine -B agar plates test for 48hr of incubation. The results showed that one bacterial isolate St1 from Sixty isolates were characterized by this activity during the present study.

The hospital environment is one of different sources for a microbial population. As shown in Fig. 4 the colonies of S. haemolyticus (St1) showed positive on Rhodamine -B agar plates test. The colonies of lipase producing bacteria were showed halos of orange fluorescent during 48hrs of incubation at 37°C, This appearance may be due to the hydrolysis of substrate, or due to the construction of conjugate of a Rhodamine -B long chain fatty acid. The results in the present study agree with study of21,13,22-26. Qualitative screening of Pseudomonas sp LSK25 lipase showed positive evidence of lipase production. The strain was able to produce orange fluorescent halos (Rhodamine B) within 48 h incubation at 4°C 27. 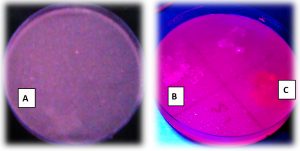 The results of effect incubation time in the lipase construction is appear in the Fig. 5. As it shown in this figure the maximum production of crude lipase extract for the isolate Staphylococcus haemolyticus in 72hrs with fixing other experimental conditions was about 140U/ml. The extracellular lipase production of Staphylococcus spp. were affected by number of factors. The present study agree with28, who suggest that 48hrs of incubation was the optimum period for lipase production. The study of29,30 showed that the maximum lipase production was found at 48hrs. of growth for Bacillus spp. The study of30 showed that the maximum production of lipase being highest than 24U/ml after 48hrs.of incubation. According to19, The maximum lipase activity by S. aureus of the culture medium was seen after 45 hours at 35°C. While the study of27 reported that The highest lipase activity was achieved over 36 h at 10°C in production medium at pH 7.0. Staphylococcus hemolytic is prosperous bacteria has ability to secrete extracellular lipase. The bacterial isolates from clinical sources were screened as lipase producing bacteria and showing on Rhodamine-B agar plate. Lipase production of organism were measured with varying incubation temperature (20 to 50°C) and incubation time range (16-120)hrs. The present study displayed that Staphylococcus hemolytic (GenBank acc. MG595372.1 ) isolated of the clinical specimens described in high lipase production. The results appeared that the enzymatic activity of crude lipase extract was maximum for incubation period of 72 hours at 37°C about 140 U/ml.

The authors are thankful to Dr. Rafid Mohammed Ali for his efforts and help. We also
like to thank Dr. Ahmed Al–Shameree for his support in genetic part, and thankful to Dr. Ahmed Jalal for Departmental facilities.