Mycoplasma bovis is a major pathogen in respiratory diseases of calves and cause an excessive economic loses. The current study was a goal to diagnoses bovine Mycoplasma and chiefly M. bovis from an outbreak of pneumonia in calves that occurred in Mosul city and mainly in Gogjaly village. Forty-two lung samples were collected from slaughtered and dead pneumonic calves in seven herds of imported calves. Extraction and amplification for DNA were conduct from all samples for diagnosis of Mycoplasma and M. bovis by PCR technique. The results have recorded the presence of Mycoplasma in 88.1% of examined lungs and M. bovis was diagnosed in 86.5% of the positive Mycoplasma samples. Finally the present study is the first local study at the moment which diagnoses Mycoplasma in general and mainly M. bovis from pneumonic calves, also according to the results it recommended the use of molecular techniques and principally PCR for the diagnosis of Mycoplasma and M. bovis.

Pneumonia is one of the famous diseases of cattle and calves. It causes severe economic losses, including weight loss, feed loss, significant morbidity and mortality, neglected and underdeveloped animals, as well as the costs of treatment and early unwanted exclusion (such as death, euthanasia or slaughter)1-5.

Mycoplasma bovis is a principal pathogen of cattle and calves, and cause many infections in calves including pneumonia, arthritis, , and conjunctivitis1,7-10. So the targeted of the current study was diagnosis Mycoplasma mainly M. bovis from an outbreak of pneumonia in calves.

Samples
Lung samples were collected from forty-two slaughtered and dead pneumonic calves during an outbreak that occurred in Mosul city and mainly in Gogjaly village during the period of January-February/2019. The diseased calves were distributed in seven herds, the calves’ numbers in these herds were ranged between (27-62 calves). The clinical signs and necropsy findings were recorded. The samples under cooling condition were transported to Microbiology and PCR laboratories at department of Microbiology-College of Veterinary Medicine/ University of Mosul, and saved under refrigeration till used. All the samples were undergone to extraction and amplification.

DNA extraction and Amplification
The DNA extraction was performed according to manufacturer instructions (gSYNC™ Geneaid extraction kit): Lung samples were collected and prepared as described by11. They were collected in the plastic container and stored at -80°C until use. Lung tissue (25mg) was macerated in a 1.5 ml microcentrifuge tube with a pestle. To each sample, both of 200µl GST buffer solution and 20 µl of Proteinase-K were added. Samples were vortex thoroughly for 10 seconds and incubated at 60°C overnight. Dissolved samples were centrifuged at 16000 xg for 2 min, the supernatant was collected in new 1.5 ml tube, then 200 µl of GSB was added to the supernatant, again it was a vortex for 10 sec. 200µl absolute ethanol was added to the lysate sample and mixed well via vortex. All mixtures were transferred to GS columns and centrifuged at 16000 xg for 1min., then both W1(400µl) and W2 (600µl) buffers were added respectively to GS column with centrifugation. Finally 100µl of preheated elution buffer was added to each tube to elute the purified DNA, and stored at -20°C until used.

Two pairs of primers Table 1 were synthesized by BIONEER Co. (Korea) according to12-13 for detecting the targeted genus Mycoplasma and species M. bovis. PCR reaction was done in 25µl as in Table 2. The amplification program was performed depending on the instructions as in Table 3.

Table (3):
Thermocycler program for detection of Mycoplasma and M. bovis.

All infected calves were suffered from pneumonic signs that included labored breathing, fever, tachypnea, frothy salivation. Morbidity rates ranged between (8-15%) and the mortality rates were about (15- 34%). In necropsy findings, the main lesions recorded were congestion, disseminating caseous nodules on the surface of lungs, marble appearance, hepatization (Fig. 1), and in some slaughtered calves, the lungs had a putrefied bad odor with ulceration on surface. The results of amplification appeared that 37(88.1%) samples were positive for Mycoplasma (Table 4, fig. 4), and M. bovis appeared in 32 (86.5%) samples from these positive lungs (Table 4, fig. 5). 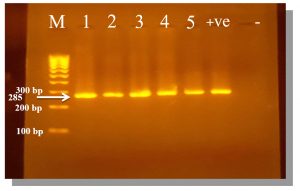 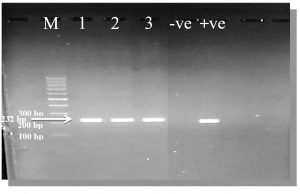 Mycoplasma bovis is a principal pathogen of respiratory diseases and mainly pneumonia in calves, and causes heavy economic losses in the cattle industry which may reach up to the third of losses that correlated to respiratory infections1,9,14.

The present study was targeted to diagnose the Mycoplasma, principally M. bovis from an outbreak of pneumonia in calves. So the results of the study recorded an excessive presence of Mycoplasma (88.1%) in samples of pneumonic calves, and M. bovis has appeared in 86.5% of these positive samples. The Mycoplasma rates and especially M. bovis excessive and terrible, and should care about especially when it a companied by considerable Morbidity (8-15%) and Mortality rates (15- 34%) with the knowledge that it appears as a resistant pathogen for several antimicrobials15-19, where one study reported that the increase in deaths of calves due to respiratory disease from an average 9.7% per year to 36.5% per year communicated with the isolation of M. bovis from the lungs20.

Although there were no local studies about Mycoplasma and M. bovis in pneumonic cases for comparing, lots of studies worldwide diagnosed and/or isolated these microorganisms in high or considerable rates from pneumonia in calves. One of these studies which concurred the current results is a Turkish study21 revealed that 80.9% of examined herds were positive for Mycoplasma infection and 87.6% of isolates were M. bovis. Another research in France22 was diagnosed M. bovis in 78.5% of feedlot calves that were suffered from respiratory signs, while in more recently French study23 the rate of isolation of M. bovis from cases of bovine respiratory disease was about 12–18% and it constituted about 55% of all isolated Mycoplasma from different pathogenic cases in cattle, whearas thorough investigation in feedlots in France24, one M. bovis strain turns out to be prevalent via the fattening stage and was accountable for shrill epidemics of bovine respiratory disease (BRD) with excessive inside-group pervasiveness. Whilst in the Netherlands M. bovis was found in 20% of pneumonic calves in fattening flocks, though it found in very little rate in healthy calves (3%)25-26, and in a recent Dutch study17 the lung isolates from M. bovis accounted about 58.5% of all M. bovis isolates diagnosed from a different infection during 2008-2014. Also, a study in Denmark was reported that 86% of pneumonic lungs found infected with mycoplasmas, and M. bovis appeared in 24% of these lungs27. Whereas Tschopp et al., 200128 inspected pneumonia in feedlot calves and stated that 50.3% of obivious respiratory attacks were attributed to M. bovis. In Belgium, a study rumored the acute and recurrent respiratory cases and showed the isolation of Mycoplasmas from 78% of calves undergoing recurrent respiratory infection and from 65% of acute pneumonia infections. M. bovis was presence in 35% of calves suffering from recurrent respiratory infection, and from 50% of acute infections29. While in a recent Belgian study30 recorded isolation of mycoplasma species by 70.5% at the level of the individual calf, while at the herd level, the presence of M. bovis was detected in 84.6% of the tested herds. Also, for comparison, a Pakistani study indicated that M. bovis was isolated by 42% of all dead calves (15 calves) and lives (35 calves) understudy at the time31. The main differences between the current results and the results of the global studies may be due to the differing in environmental conditions, ages of animal, the health status, feeding, and the strains of animals3,32-35, although the calves undergo the present study were from importing strain.

The results of current study showed diagnosis of M. bovis from 86.5% of the positive lungs for Mycoplasma, which means the presence of other Mycoplasma species (13.5%) that may be playing a role in the occurrence of pneumonia in calves, and there are many universal studies that confirmed the presence of other Mycoplasma species excluding M. bovis in pneumonic calves lungs, as well as they may be isolated or were diagnosed in an excessive rates and in some times in a rates higher than M. bovis23,26-27,36. While other studies reviewed no diagnosis of M. bovis from pneumonic infections in calves37-38.

Depending on the obtained results, the PCR technique was appeared as an excellent directly method in the diagnosis of Mycoplasma and principally M. bovis from pneumonic lungs, without the demands for culturing microorganism, which is accurate method and will reduce the consuming time and efforts. Many global studies supported the use of PCR instead of the culturing or together for diagnosis of Mycoplasma and particularly M. bovis39–45.

In conclusion, this study is the first local research at the moment to diagnose Mycoplasma in general and in particular M. bovis of pulmonary calves using molecular techniques. Also, according to the current results it recommends the use of PCR in the direct diagnosis of M. bovis from pneumonic lungs, and detect the other Mycoplasma species in pneumonic calves.

ACKNOWLEDGMENTS
The authors thank college of the Veterinary Medicines/ University of Mosul, Iraq for their Moral support.

AVAILABILITY OF DATA
All datasets created or investigated during this study are involved in the manuscript and/or the Supplementary Files.