Carbapenem resistance is increasing and emerging as a public health threat. The Indian subcontinent serves as a reservoir for all 3 types of carbapenemases: KPC, OXA-181 and NDM. The present study was done to determine the antibiotic resistance pattern of Gram negative bacilli (GNB) belonging to family Enterobacteriaceae and molecular detection of blaKPC gene among the Carbapenem resistant Enterobacteriaceae (CRE). Antibiotic sensitivity pattern of 301 gram negative isolates, members of Enterobacteriaceae (E. coli, K. pneumoniae, K. oxytoca, Proteus species, Citrobacter species, Enterobacter species and Serratia species) was determined and those resistant to carbapenem (ertapenem) were further processed in the study. Modified Hodge Test (MHT) was performed to phenotypically confirm the presence of carbapenemases (blaKPC) and Polymerase Chain Reaction (PCR) was done to identify blaKPC gene. Of the total 301 isolates, 45 were resistant to ertapenem. Out of these 45 isolates 32 were MHT positive and three of these 32 MHT positive strains harboured blaKPC gene.

The members of family Enterobacteriaceae are Gram negative bacilli (GNB) which are a part of human normal flora. They are also a source of community and hospital acquired infections1.

Carbapenems belong to a group of beta lactam antibiotics which have a broad spectrum activity. They are being used for treatment of severe life threatening infections caused by Multidrug resistant (MDR) GNB.  These agents have become ineffective due to misuse and development of resistance against them2.

Resistance has been developing against the antibiotics soon after they have been put to use. Alexander Fleming the discoverer of penicillin, while accepting his Noble Prize in 1945 warned about the possibility of drug resistance. Resistance to carbapenems was first demonstrated in the North Carolinan strain of Klebsiella pneumoniae that produced an enzyme Klebsiella pneumoniae carbapenemase (KPC). The gene coding for resistance was found on plasmid. It was then when carbapenem resistance arrived3.

In order to contain the spread of bacteria harboring blaKPC gene effective control measures and judicious antibiotic usage in hospitalized patients must be implemented.

The study focused on KPC producers because they are an important resistance mechanism for wide range of GNB which is not only limited to K. pneumoniae. KPC producing isolates can be misidentified by routine tests and should be suspected by ertapenem resistance. The study was done to identify blaKPC and not other carbapenemases as no other study has been done previously to detect blaKPC gene in a hospital situated in budhera village in Haryana.

The study was conducted in the microbiology laboratory of SGT Medical College and Hospital for a period of 8 months (March-October 2018) on the patient samples received from various clinical departments.

The institutional ethical committee approval was taken prior to commencement of this study.

Phenotypic Test for detection of Carbapenemases
Modified Hodge Test (MHT)
Mueller hinton agar (MHA) plate was inoculated as a lawn culture with 0.5 Mc Farland E. coli ATCC 25922. The plate was dried for 3 to 10 minutes and ertapenem disc was applied on the centre of the plate. Using a 10-μL loop, 3 to 5 colonies of test and Quality Control organism which were grown overnight on a blood agar plate were inoculated in straight lines perpendicular to each other. After overnight incubation, the plate was looked for the presence of a “clover-leaf’’ indentation in the zone of inhibition. The isolates showing clover-leaf like indentation around the zone of inhibition of E. coli ATCC 25922 were considered as positive and absence of indentation was considered as negative. Quality control strains used were:

The PCR cycles followed were:

During the study period, 301 isolates of Enterobacteriaceae (E. coli, K. pneumoniae, K. oxytoca, Proteus spp., Serratia spp., Citrobacter spp., Enterobacter spp.) were tested by Kirby bauer disc diffusion method, of which 45(14.9%) were found to be Carbapenem Resistant Enterobacteriaceae (CRE).Citrobacter spp., Enterobacter spp. and Serratia spp. were susceptible to Ertapenem, so they were not processed further for Phenotypic and Genotypic tests. All (100%) of CRE were resistant to ertapenem according to CLSI 2018 guidelines. Of the 45 ertapenem resistant isolates, 23(51.1%) were from urine, 16(35.5%) from pus, 3(6.6%) from sputum and 3(6.6%) from blood. Of the forty five isolates twenty nine were E. coli, twelve were K. pneumoniae, three K. oxytoca and one Proteus mirabilis. 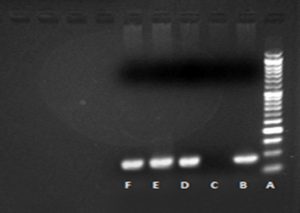 There are reports of increased prevalence of carbapenems resistant GNB over few years. The rapid dissemination of Carbapenemases like KPC is a major challenge for physicians and   clinical laboratories. However, identifying the different bacterial mechanisms of resistance is crucial for infection control and epidemiological studies7. KPC producing isolates have been reported from USA, Italy, China, Greece, Argentina, Israel, Poland, Taiwan and Columbia. There are reports of sporadic occurrence of KPC from South East Asia including India, Australia and South Korea8.

However, various studies conducted in India before 2006 failed to show any evidence of resistance for E. coli and K. pneumoniae to carbapenems10, Indian subcontinent serves as a reservoir for all 3 types of carbapenemases: KPC, OXA-181 and NDM8.

Two different studies from Western Rajasthan reported 31.7% and 37% CRE respectively11, 12. Whereas, the present study showed 14.9% CRE, this is lesser than the other two studies. However, it is in accordance to a study conducted in a Tertiary Care Hospital, North India15 which showed 14.7% CRE.

In the present study, CRE isolates exhibited increased prevalence of multidrug resistance to various antibiotics ranging from 66.6% to 100% which is comparable to a study from Northeast India with resistance rate ranging from 85.7% to 100%14.

MHT was positive in 32 (71.1%) isolates, whereas, only 3(9.3%) showed the presence of blaKPC  gene by conventional PCR. However, this non specificity of MHT was discussed by Tsakris et al15.Their report states that the false positive results of MHT could be due to presence of CTX-M ESBL positive or AmpC–hyperproducing Enterobacteriaceae. This also suggests the involvement of other resistance mechanisms, such as production of carbapenemases (OXA, NDM, MBL) alone or in combination with porins loss, ESBL (TEM, SHV, CTX-M)7 .

However, this is the first study conducted in SGT medical college and hospital to detect the prevalence of blaKPC gene.

The present study reported 9.3% KPC isolates which is more than the findings of a study conducted at Safdarjung Hospital, New Delhi 17 that reported 2.1% KPC producers. However, absence of blaKPC was reported in a study conducted in North India by Mohan et al 18  that is contrary to the present study. Although, there are a few studies from India that shows the prevalence of CRE in clinically relevant isolates but not many laboratories follow the standard protocol for CRE identification.

The emergence of carbapenem resistance globally and in India is a cause of concern because of the limited treatment options for carbapenem resistant organisms. More studies should be undertaken in different regions of the country to avail the information on prevalence of KPC. Early diagnosis of KPC can improve the patient outcome. Whereas, the diagnostic technique to be introduced in the laboratory workflow is a choice which should be done carefully, as per the resources available and personnel in each hospital.

AVAILABILITY OF DATA
All datasets created or investigated during this study are involved in the manuscript.