Resistance to antibiotics is a serious concern and immediate steps are required to crub the resistance gained by microorganisms. Extended spectrum beta- lactamases (ESBLs) producing E.coli (Escherichia coli) is rapidly increasing and making antibiotics difficult to treat around the world. The screening of ESBL producers among Escherichia coli was done by method Double Disk Synergy Test (DDST), using ceftazidime and ceftriaxone disc and Combined Disc Test (CD) using ceftazidime-clavulanic acid according to Clinical and Laboratory Standard Institute (CLSI) protocol. In the DDST method, out of 60 clinical isolates of Escherichia coli, 22 were found ESBL positive isolates, and among 22 positive isolates   18 strains shows increase in  zone of inhibition by both ceftazidime and ceftriaxone disc. The remaining 4 ESBL isolates, 3 of them showed zone of inhibition to ceftazidime and only 1 isolate showed inhibition by ceftriaxone disc. Similarly, in CD method apart from 22 isolates detected by DDST method it detected 1 more isolate as ESBL producers. Furthermore, the CD method detects inducible beta- lactamase in III generation of cephalosporin sensitive isolate. Our study showed 22 isolates were found by DDST method and 23 isolates by CD method. This study results showed the prevalence of ESBL in E. coli were 36.66% by DDST and 38.33% by CD tests and we conclude that combined disk test (CD) is better than DDST for detection of ESBL.

The beta lactam antibiotics are hydrolyzed by  Extended-spectrum b-lactamases  (ESBL ) producing microorganism (Klebsiella species, Acinetobacter,  Pseudomonas aeruginosa, Citrobacter, Proteus, Enterobacter and Escherichia coli )  and is a major challenge in infectious diseases (Aminzadeh Z et al., 2008; Khanfar et al.,2009). Antibiotic resistant strains of Escherichia coli produce an enzyme known as ESBL and such strains are resistant to other class of antibiotic (Jacoby GA et al., 2005; Livermore DM et al., 2007). This makes the pathogen hard to treat. ESBL producing strains cause a wide range of infections from septicemia to urinary tract infection (Thakur S et al., 2013). The main target of ESBL producing pathogens are elderly people and those who have been recently admitted in the hospital and are taking antibiotics.  The ESBLs are typically plasmid mediated enzymes that hydrolyze penicillin, third-generation azetreonam and cephalosporin. They are not active against cefotetan, cefoxitin and cephamycins but are susceptible to clavulanic acid. Other, Antibiotics classes like, fluroquinolones and aminoglycosides the ESBL are resistant (Egea P et al., 2011; KO ks et al., 2007; Yadav et al., 2015). Plasmids play an important role in resistance to cephamycins involving amp C gene. The oxyimino group addition to the C-7-amino position of second and third generation of cephalosporin results in the broad spectrum cover to Enterobacteriaceae.  The attachment of beta lactamase to the antibiotic is prevented by oxyimino group (Kangh et al., 2005; Sachin et al., 2011). Furthermore, uncontrolled use of aztreonam and cephalosporin (Third generation cephalosporin) results in the mutation in the enzymes and which in turn cause the emerge of ESBL producing pathogens (Grover et al., 2006; Sharma et al., 2013; Kumar et al., 2014). The double disk test method is primarily used to detect the ESBL producing microorganism. The aim of this study is to find the ESBL producing E. coli from non ESBL producing strains.

The clinical isolates of E. coli strains were obtained from specimens (urine, blood, wound, pus, and semen) from patients admitted in different wards of Fortis Hospital, Noida, India between February 2016 to May 2017 following standard procedures CLSI. A total of 60 samples of E. coli were collected of all age groups. After receiving  the clinical isolates in the laboratory they were immediately cultured on Mac Conkey agar for further study. Standard protocol was followed for the identification of E.coli (Collee et al.,1996; Bailey and Scott’s 2007). Permission for work was approved by the Ethical committee of the institute and consent from patients.

Extended-spectrum b-lactamase screening of the isolates
An inoculum of 0.5 McFarland dilutions of all test strains, negative control and positive control were prepared in 3 ml of normal saline. Streak a lawn of all dilution of all test strains, negative control and positive control to a Mueller Hinton agar plate and allow to dry 3–5 minutes. After drying, an amoxicillin-clavulanic acid (20/10 mg) disc was placed at the center of the plate. A disc of ceftazidime (30 mg) and ceftriaxone (30 mg) were placed one on either side of amoxicillin-clavulanic acid (20/10 mg) disc at a distance of 15 mm from center to center. All plates were incubated at 35°C ± 2°C in incubator for 16–24 hours. E.coli (ATCC 25922) and K.pneumoniae (ATCC 700603) producing beta-lactamase were used as Negative control and positive control. After the incubation of 24 hr the culture plate was studied for zone of inhibition in an area between ceftriaxone and amoxicillin clavulanic acid in comparison with the zone of inhibition on the far side of these drugs was taken as a positive.

Double disc synergy test (DDST)
Muller Hinton Agar culture plate was used as standard disk diffusion assay.  The ceftriaxone of 30 microgram and cefazidime of 30 microgram (15mm apart), including a disk of augmentin 20 +10 micrograms) disks were used for screening of ESBL producing microorganism (Wayne, PA. 2013). The zone of inhibition of either ceftriaxone or cefazidime towards amoxicillin and clavulanic acid is considered as ESBL producing pathogen and is known as confirmatory phenotypic test.

Combined Disc Test (CD)
The ESBL producing group I (class A) microorganism are inhibited by clavulanic acid and for such type of stains third generation of cephalosporins along with clavulanic acid can be used as confirmatory test (Kang HY  et al., 2005). If the zone of inhibition restricts to third generation of cephalosporin only, than it can be considered as confirmatory test for ESBL. An inoculum of 0.5 McFarland dilutions of all test strains, negative control and positive control were prepared in 3 ml of normal saline with the help of 0.5 McFarland standards. Streak a lawn of all dilution of all test strains, negative control and positive control to a Mueller Hinton agar plate and allow to dry 5 minutes, than aspetically a disk of ceftazidime (30mg) -clavulanic acid (10mg) and ceftazidime (30mg) were placed at a 30 mm of distance. All plates were incubated at 35°C in incubator for 24 hours. Non-ESBL producing organism E.coli and an ESBL-producing organism K. pneumoniae were used as negative and positive controls respectively. After 18 hr of incubation the culture plate is examined for the zone of inhibition. The 5mm zone of inhibition of (Ceftazidime-Clavulanic acid) is greater than that of ceftazidime than it will be taken as positive for ESBL production. 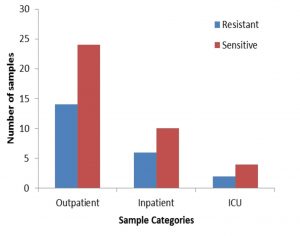 Combined Disc Test (CD)
All 60 non duplicate isolates of E. coli isolates were again  tested by Combined Disc Test, detected 23(38.33%) strains as ESBL producers, among which 16 (26.66%) isolates from urine, 2 (3.33%) from pus, 2 (3.33%) from wound, 2 (3.33%) from blood and 1 (1.66%) from semen (Figure 3). The isolates exhibited a significant zone size enhancement with the combination disk (ceftazidime -clavulanic acid) when compared to the plain antibiotic (ceftazidime) discs (Figure 5). The CD detected the same 22 strains of DDST as well as additional 1 strain as ESBLs producers. The CD test also detects inducible B- lactamase in 3rd generation cephalosporine sensitive isolates. Only one isolate is sensitive to ceftazidime but it is detected as ESBL producer. Among 23(42%) metallo beta lactamase (MBLs) producing isolates, 16(30%) isolates E. coli exhibited zone of inhibition difference between combination disk (ceftazidime -clavulanic acid) and ceftazidime disc alone were 6 to 10  mm. Remaining 7 (12 %) isolates exhibited e” 10 mm difference zone. Remaining 47 E. coli isolates had a smaller difference (less than 5 mm) in zone of inhibition around the combined disk than around the ceftazidime disc alone and thus they were considered to be non ESBL producer.

Comparison between double-disk synergy test and combined disc test
The possible presence of ESBL-producing strains was tested among 60 E. coli strain by Double Disk Synergy Test (DDST) and Combined Disc Test (CD) (Figure 3). Above two methods DDST and CD detected ESBLs producer isolates were 22 (36.66%) and 23 (38.33%) respectively (Table 1). The CD detected the same 22 strains of DDST as well as additional 1 strain as ESBL producers. When procedures of DDST were repeated for above 1 (firstly negative) strain these become positive for ESBL in repeated DDST test. The phenotypic methods CD and DDST are most reliable for ESBL detection in E coli. However, the DDST has a disadvantage as distance varies with the strains. Our study confirms that the CD is far more accurate than DDST for ESBL producing bacteria. This method can be used a key to monitor ESBL emergence.

Poor sensitivity in DDST mainly due to the lack of optimum disc space results in the impaired ESBLs inhibition by clavulanate leads to the inaccurate identification of chromosomal cephalosporinases producing ESBLs strain in the Muller-Hinton agar medium. Earlier studies reports various alternative methods to overcome this disadvantage of DDST such as reduction of disk space from 20 mm to 30 mm to obtain more accurate results (Thomson KS  et al.,1992) whereas, in our study we placed the ceftazidime and ceftriaxone disks at a distance of 15 mm from AMC disk to obtain more sensitive results as reported by Coudron PE et al., 1997).

The primary initial screen test for ESBL positive E.coli isolates is CLSI method in many hospitable based microbiology laboratories. The delayed results from this CLSI method were may adversely affect the patient treatment; hence, there is a need to develop a reliable, sensitive, and rapid ESBIL detection method. In this regards, in this study we tested an accelerated hybrid protocol to overcome the cons of the CLSI method. In our study we screen the ESBL strains by incorporated the combined disk test in the standard KB (Kirby-Bauer) disk diffusion antimicrobial susceptibility test to obtain the more accurate and rapid sensitive results. This new practiced hybrid protocol allowed to detecting the ESBL producing strain same day along with the first line antimicrobial susceptibility test and aided to improve the patient care.

In our study, we found that the combined disk test is reliable, convenient, cheap and easy to perform than double disk synergy test. It also reduces the time of reporting and antimicrobial therapy. By placing a disc of ceftazideme /clavulanic acid as extra disc for ESBL detection in E. coli routine susceptibility on MHA plate, the comparison between zone of inhibition difference ceftazideme and ceftadideme / clavulanic acid gives early detection of ESBL producing isolates. The sensitivity and specificity of combined disc test is higher than that of the DDST as described above. Thus combined disk test (CD) can be easily used in routine laboratory of developing countries including India.

Our study validates a simple and highly sensitive phenotypic method for the detection of ESBL production in E. coli. Based on the findings of our study we conclude that CD is better than DDST for detection of ESBL. As, the CD test was able to detect more than one strain whereas, DDST test limited to single strain only. Furthermore, CD test has high specificity and sensitivity than DDST. In our study the prevalence of ESBL in E. coli were 36.66% by DDST and 38.33% by CD tests.

Acknowledgements
I would like to express my special thanks of gratitude to Dr Avineesh Kumar (Asst Professor, Microbiology), who gave me the golden opportunity to do this wonderful project.