The menace of multidrug resistance among bacterial infections is an issue of global public health. Treatment of these superbugs with first line antibiotics is associated with significant treatment failure leading to increased mortality and morbidity. Carbapenems and polymyxins are the saviour antibiotics in case of such infections. But the problem is compounded when these antimicrobials also fail. The addition of beta-lactamase inhibitor like sulbactam and disodium ethylenediaminetetraacetic acid broaden the in vitro antibacterial action of ceftriaxone. This novel combination has been found to be effective in most of the drug resistant bacterial strains.

A broad spectrum of infections ranging from pyaemia to bacteraemia are caused by gram-negative bacteria. Such infections are a substantial burden especially in critical care units1. There has been a significant increase in multidrug resistant (MDR) bacterial strains all over the world, more so in South-East Asian countries, including India1,2. Carbapenems are structurally stable against common resistant mechanisms, so they are considered to have a frontline role in the treatment regime for MDR micro-organisms. However, with the recent upsurge of carbapenem-resistant bacteria in the last few years, the efficacy of carbapenems in treating these drug resistant strains has been undermined3,4.

CSE, an antibiotic adjuvant entity (AAE) is combination of ceftriaxone, sulbactam and disodium ethylene-diamine-tetraacetic acid (EDTA). It displays a broad spectrum of antibiotic activity against gram negative infections. This has been proposed to be an alternative for management of gram negative MDR threat. The mechanism of action of CSE has been depicted in the Fig. 15,6,7. Various clinical trials of CSE have showed it’s efficacy towards many MDR micro-organisms as compared to beta lactam-beta lactamase inhibitor combination and carbapenems. These studies have shown that it can act as a potential alternative treatment for reducing the burden on use of last resort antibiotics8-11. After phase III clinical trials, this drug got approved by Indian FDA and thereafter has been marketed in India for the treatment of MDR infections. CSE has been approved by Drug Controller General of India and is being used since more than 5 years now1,5,8. Since the rural population is less explored with respect to antibiotic resistance, we aims to analyse the susceptibility of CSE versus cephalosporins and carbapenems among gram negative bacteria isolated from various microbiological specimens in a rural setup. This knowledge will help clinicians in deciding whether CSE can be used when the above antimicrobials for treatment of MDR pathogens are not susceptible and also to save the last resort antibiotics like carbapenems and polymyxins. Study design and study population
This is an observational, cross-sectional study conducted at a multi-speciality hospital of North India catering to rural population. The samples received in Microbiology laboratory for culture & antimicrobial susceptibility testing on clinical suspicion of infection were processed. One hundred twenty clinical isolates having growth of gram-negative bacteria from different clinical samples were collected from July 2019 to November 2019. All patient details were anonymized, coded by randomization and delinked from any identity of the patients.

Sample processing
On clinical suspicion of infection at any site, appropriate specimens were sent to the Microbiology laboratory. The blood specimens received were inoculated into blood culture bottles and aerobically incubated in the BacT/ALERT 3 D system (bioMerieux). When machine flashed positive for the bottle, Gram’s stain was prepared. In case of urine specimen, it was inoculated on cysteine lactose electrolyte deficient (CLED) culture media for semiquantitative culture. A colony count of 104-105 was considered significant for urine culture. For all other specimens, subculture was done on blood agar and MacConkey agar.

Antimicrobial susceptibility test (AST)
AST was performed by Kirby–Bauer disc diffusion method on MHA (Mueller Hinton Agar). Inoculum with turbidity of the 0.5 McFarland standard from the test strain was inoculated with a sterile swab on MHA plates. Within 15 minutes, discs of ampicillin (10μg), ceftriaxone (30μg), amikacin (30μg), piperacillin-tazobactam (100/10μg), gentamicin (10μg), cotrimoxazole (1.25/23.75µg), ciprofloxacin (5μg), ertapenem (10μg) and CSE (45μg) were applied to the MHA plates and incubated. Zone of inhibition was measured in mm (millimetre) after incubation at 34- 36°C for 16-20 hours.

Interpretation
The Clinical and Laboratory Standards Institute guidelines (CLSI) 2019 was used to characterize the isolates into susceptible, intermediate and resistant12. MDR microorganisms were those which showed resistance to three or more classes of antimicrobials.

A total of 1483 specimens with suspicion of bacterial infection were received in the microbiology laboratory throughout the study period. The cultures came out to be positive in 437 samples, out of which 182 were Gram negative bacteria. One twenty of the 182 culture were included in the study as the details of the rest could not be traced (Fig. 2). Of the 120 samples included in the study, majority were urine samples, followed by pus, blood, and others which included body fluids and endotracheal secretion. Table (1):
Characteristics of the study population.

The susceptibility of E. coli isolates was 85% to amikacin and 76% each to ertapenem and gentamicin. K. pneumoniae isolates were more resistant than other Enterobacteriaceae with 78% susceptibility to amikacin, 73% to ertapenem and 70% to gentamicin. The most resistant among all the Gram negative bacteria were Acinetobacter spp. with 78% to amikacin and 65% to ertapenem (Table 2). MDR strains were detected in 24% of E. coli isolates, 27% K. pneumoniae, 29% Pseudomonas spp. and 35% of Acinetobacter spp. There is statistically significant difference between sensitivity of beta-lactam (ceftriaxone) & CSE (p value<0.0001) and also beta-lactam-beta lactamase inhibitor & CSE (p value<0.0005).

In the present study female preponderance can be explained by the fact that majority of the samples were from suspected UTI patients which is commoner in females similar to other Indian studies13,14. The middle age group of 20-60 years is most implicated in infections as they are the earning members of the family. This population is most exposed to the environmental risk factors and so vulnerable to minor infections. The older age group of more than 60 years if infected have severe complications that may lead to prolonged hospital stay and thus exposure to hospital flora leading to life threatening infections. The members of Enterobacteriaceae (especially E. coli) were the most common pathogens since UTI was the commonest infection similar to isolation rates in other studies. The resistant strains were mostly isolated from the in-patients admitted in wards and intensive care units14-17. 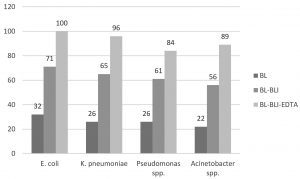 There has been sharp rise in MDR bacterial infections, especially against common antimicrobials such beta-lactams which are the first line of treatment. Global trends of resistance as assessed by WHO show 16-68% third-generation cephalosporin resistance among E. coli while 34-81% among K. pneumoniae in South-East Asian Region18. In our study, Gram-negative bacteria showed 65-78% resistance to cephalosporins and 12-35% resistance for carbapenem while there was good sensitivity to CSE. The most resistant pathogen was Acinetobacter spp. while it was K. pneumoniae among the members of Enterobacteriaceae that showed high resistance. Indian studies on gram negative bacterial infections have reported high rates of resistance for β-lactams, β-lactams- β-lactamase inhibitors and rapidly rising trend for carbapenems19,20. Irrational and overuse of the reserve antibiotics like carbapenems and colistin which are recommended only in MDR cases21 has led to their increased resistance. This pattern is a serious concern and is now very evident in Indian scenario22. Considering the above situation newer strategies are needed to treat MDR infections while sparing the last resort antibiotics as development of newer drugs is time consuming and exhaustive.

To tackle the rising menace of MDR, the collective aim should be on narrowing down the number of antibiotics use to essential only and de-escalating the broad spectrum antibiotics as per the susceptibility report. The currently effective high end antibiotics should be preserved for clinical use in critical cases.

ARBs (antibiotic resistance breakers) or antibiotic adjuvants are non-antibiotic moieties without any direct antimicrobial activity but in combination with currently failing antibiotic agents, they can overcome various resistance barriers23. EDTA augments the penetration of drug by enhancing porosity and chelates divalent ions in extracellular polysaccharides & bacterial cells thus damaging the microbial biofilm, resulting in reduction of MIC. Further, CSE modulates the overexpression of efflux pumps and curtails the transfer of resistant plasmids, thus preventing the spread of resistance.24-26.Results of our study show good in vitro sensitivity of CSE for most of the Gram negative bacteria commonly causing MDR infections27,28. The safety profile of CSE has been found to be similar to that of ceftriaxone alone29.

There are a few limitations of our study. First, it was a single centre study. Second, clinical details of patients could not be included in the study as that would require ethical clearance. The strength of this study lies in the fact that it studies rural population of a developing country which is less explored. Also, strict, protocol-driven practices for sample collection were followed, reducing any chance of contamination.

Repurposing drugs using ARBs not only overcomes many of the barriers to developing new antibiotics but it could also salvage many of the existing antibiotics for the future generations.