Sepsis is one of the leading causes of morbidity and mortality in hospitalised patients1. Accurate information of patients with blood stream infections can be obtained by performing antibiotic susceptibility test and identification of bacteria2. Timely and early information regarding the identification and susceptibility pattern of significant bacteria helps the clinicians in rapid diagnosis, determine resistance pattern both in community and institutions and also contribute to the reduction in hospital-care associated costs3. Appropriate treatment and early diagnosis of blood stream infection can save the life of people4.

The conventional phenotypic methods, based on culturing on agar (e.g.: Disk diffusion test) or on micro titration plates (e.g.: broth dilution method) is one of the commonly employed methods2. In case of standard AST, the results are available only with a delay of 48-72h after sampling as bacteria needed to be cultured before AST can be executed2.  Standardised of inoculum is a main problem in DAST, so it has been criticised by American Society for Microbiology (ASM), the British Society for Antimicrobial Chemotherapy (BASC), and the European Committee on Antimicrobial Susceptibility Testing (EUCAST)2.

Disk diffusion has many advantages such as it allows the visibility of growth, correct inoculum, mixed cultures and other abnormalities and it is flexible and cheap. And another benefit is the possibility of executing DAST2. Rapid and most reliable results for direct and standard inoculation are provided by the non-fastidious Enterobacteriaceae family among all the other bacteria5. DAST by turbid broth is an accepted method for rapid reporting. Although not mentioned in CLSI, but standardization of broth for direct sensitivity is mentioned in BSAC (British Society for Antimicrobial Chemotherapy) methods6,7. Previous studies comparing DAST with conventional method have yielded varying results and these studies were conducted only on gram negative bacilli. The study focuses on performance and clinical significance of DAST in blood culture.

Study duration
The study was conducted from January 2017 to June 2017.

Sample size
A total of 116 positive blood culture samples were included in the study (time bound).

Processing of samples
Samples of blood was collected with aseptic precaution from patients with suspected bacteraemia/septicaemia and was inoculated into blood culture bottles and incubated in BACTEC 9050 or BacT/ALERT systems. When the system beeps showing growth of bacteria in blood culture bottles, bottle was removed and an aliquot of sample was used for smear preparation and Gram staining. Samples which show single type of bacteria were used for the study8.

Gram negative bacilli
A drop (20µl) of blood was placed in 5 ml of sterile water using the venting needle. A sterile cotton wool swab was dipped and excess was removed by turning the swab against the walls of the container. The swab was used to spread the inoculum evenly over the surface of susceptibility plate (6).The following panels of antimicrobial disks were used: amikacin (30µg), ampicillin (10µg), amoxicillin/clavulanic acid (20/10µg),cefuroxime(30µg), cefepime(30µg), ceftriaxone(30µg), ciprofloxacin (5µg),cefoperazone/sulbactum (5µg), trimethoprim/sulfamethoxazole (1.25/23.75µg), ertapenem (10µg), gentamicin (10µg), imipenem (10µg), meropenem (10µg), piperacillin/tazobactum (10µg), tigecycline (15µg). The zone inhibition were interpreted as Susceptibile (S), Intermediate (I), Resistant (R) as per CLSI guidelines 2016[9].

Gram positive cocci
Three drops (60µl) of blood was mixed in 5 ml of sterile water using the venting needle. A sterile cotton wool swab was dipped and excess was removed by turning the swab against the walls of the container. The swab was then used to spread the inoculum evenly over the surface of susceptibility plate (1). The following panels of antimicrobial disks were used; For Staphylococcus aureus and coagulase negative staphylococci: clindamycin (2µg), cefoxitin (30µg) ciprofloxacin(5µg),erythromycin (5µg) gentamicin (10µg), linezolid (30µg), rifampicin (5µg), penicillin (10units), trimethoprim/sulfamethaxazole (1.25/3.75µg), teicoplanin (30µg). 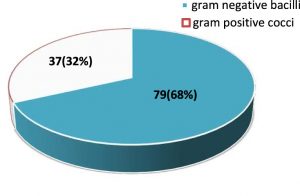 The most frequent isolates among gram-negative bacilli and gram-positive isolates is given in table 1 and table 2 respectively.

For all 116 gram negative isolates; we observed 94.3% of no errors. DST yields 55.17% categorical agreement / minor error, 15.5 % major error and 0.8 % very major error. Direct antimicrobial susceptibility correlation for gram negative bacteria and gram positive bacteria is given in table 3,4,5,6 and 7 respectively.

Although there are many advances and diagnosis for the treatment of sepsis. Sepsis remains a major cause of death these days. Early detection of pathogen and their susceptibility pattern, plays a vital role in the diagnosis of sepsis. Immediate administration of antibiotics in sepsis is essential so as to reduce the morbidity and mortality rate in the hospitals. Mixed cultures and improper standardisation of the inoculums are the two major issues stated in the previous studies10. In the present study 116 positive blood culture samples were evaluated which were suspicious cases of septicaemia. Only unimicrobial culture was included in our study. Polymicrobial cultures were avoided based on gram stain results but few specimen that appeared to be unimicrobial were later found to produce polymicrobial growth in subcultures. Also blood cultures positive for fungus were also excluded from our study. Frequency of isolation in our study for gram negative isolates were found to be higher than gram positive isolates. This was similar to many other studies1,2. There was a contradiction in many other studies, that gram positive isolates was higher than gram negative isolates11,19. In the study done by fay and Oldfather , method of standardisation of inoculum was directly on the blood samples. Due to this there was a possibility of different inhibitory factors present in the blood to interfere with the results produced11. Therefore to avoid the error that can occur due to standardisation of inoculums we followed the guidelines of BSAC6. For standardisation we used the method of diluting the blood samples with sterile saline ,which reduced the inhibitory factor.

We used different volumes which was slightly different from the study done by Fay and Oldfather. They used an inoculum of 0.03 ml whereas in the present study we used a volume of 5 ml sterile water for the dilution of blood culture samples, according to BSAC guidelines6. Similar study done from an oncology centre in Eastern India also used the similar method instead of sterile water they used 0.45% saline1.

Since 1970’s many studies have been done based on comparison of Direct susceptibility testing with that of conventional testing. Even though several studies reported an agreement of 90-97%, repeating the sensitivity with the conventional method is proposed. In our study the percentage rate for very major error was found to be low followed by major error and the minor error rate was observed to be highest. Similar findings were reported in the study done by Washington and Johnson were the direct susceptibility testing was found to be both feasible and accurate as compared with standardised susceptibility testing12. Studies done by Mirret et al and Doern et al also observed the error rates to be similar to our study with however they did not report any very major errors13,14.

A study done  in Eastern India also showed that the rate of errors to be less1. However, the very major error rate was found to be high in several other studies which contradict the findings in our study10,15. Among the antibiotic panels evaluated for the gram negative isolates, it was observed that, very major errors were found in E.coli and Klebsiella for drugs amikacin , amoxicillin clavulanic acid , and trimethoprim/sulfamethoxazole and major error for amikacin, amoxicillin clavunic acid, tigecycline, and ciprofloxacin. Several other studies have reported different error rates for different antibiotic panels1,16,17. In case of gram positive isolates we obtained very major errors for clindamycin and rifampicin and major error for teicoplanin.

The frequent isolates in gram positive bacteria was S.aureus which was consistent with earlier studies18. Similarly in Gram negative isolates it was Escherichia coli followed by Klebsiella species. The isolate rate in case of gram negative bacteria was similar to the previously reported studies10,18,19. Among gram negative bacteria, imipenem and meropenem showed lesser resistance. Enterobacteriaceae family showed high resistance to ampicillin, amoxillin and gentamicin which was also reported in the studies14,20. All the strains of S.aureus isolated in our study were found to be resistant to penicillin which was comparable to another study done by Garg A et al.21.

We compared DAST and standard AST for blood culture isolates. For gram negative bacilli, the concordance rate between these two methods was 94.14%, whereas for gram positive cocci ,it was 95.26%. Gram negative bacilli showed highest concordance of 100% for the following antibiotics; ampicillin, cefrriaxone, cefuroxime and meropenem. Gram positive cocci showed highest concordance for clindamycin, erythromycin and pencillin.The inoculum size influences the result of DAST and standard AST. Therefore standardization of inoculum is crucial. To conclude DAST can be used to start early antibiotic treatment for bacteraemia/septicaemia.

Acknowledgements
The authors would like extend sincere gratitude to the university, guide for their exemplary guidance, constant encouragement and careful monitoring throughout the study.