Group B Streptococcus (GBS) is an opportunistic harmless bacterium which the leading cause of neonatal infections. Our purpose was to determine capsular genotypes distribution and antibiotic resistance pattern of GBS isolated from clinical samples. Two hundred and twenty two GBS strains isolated from clinical samples from different hospitals in Tehran, Iran. After identification by specific cultures and biochemical tests, broth microdilution method was used to determine the minimal inhibitory concentration (MIC) of antibiotics based on standard protocol. The erythromycin-clindamycin double-disk test was used to determine the inducible resistance phenotypes. Capsular genotypes were identified by PCR method. The high rates of antibiotic resistance in GBS were related to gentamycin 89.18%, tetracycline 87.38%, kanamycin 62.16%, clindamycin (67.1%), erythromycin 57.2%, and chloramphenicol 32.8%. All strains were sensitive to vancomycin, penicillin, and ampicillin. Between eleven capsular antigens, serotypes such as III(50.9%) ,V(27.47%) ,Ib(17.76%) ,Ia(15.54%) , Ic (5.85%)were the highest. The genotypes distribution and the patterns of resistance phenotypes of GBS may vary in different areas. Thus, it is required to be considered in each region to work out strategies for prevention. The PCR method is recommended as a rapid and reliable technique for identification and molecular epidemiology study of GBS.

GBS is one of the primary agents of invasive infections such as sepsis and meningitis in neonatal from birth to 4 weeks of age. Also, GBS is a significant pathogen in geriatrics and those with underlying medical disorders. (1)

Ten to 30% of pregnant women are colonized asymptomatically by GBS in their vagina and rectum. If newborns are exposed to GBS during delivery, close to 50.0% will be colonized and invasive infection will almost increase 2.0%. Routine screening for maternal colonization by GBS is useful for prevention of neonatal infections. (2-4)

Penicillin or ampicillin is recommended for intrapartum prophylaxis against GBS. For at low risk, cefazolin is recommended for anaphylaxis. In case of patients at high risk clindamycin is consumed for anaphylaxis. GBS usually are not resistant to cefazolin, penicillin, and ampicillin, but may be resistant to clindamycin and erythromycin. When a GBS is detected in a pregnant penicillin-allergic woman, inducible clindamycin resistance should be tested by erythromycin and clindamycin, and only clindamycin should be reported. (5) Unfortunately, multi-drug resistant GBS is increasing and there is a little information on the antibiotic resistance patterns against β-lactams, aminoglycosides, and macrolides.

An important target for vaccine strategies against GBS is capsular polysaccharide. Having different chemical and antigenic characters, GBS capsular polysaccharides have been subdivided into eleven serotypes such as Ia, Ib, Ic, II-IX serotypes. (6) Vaccines against infections due to GBS must include the main serotypes associated with disease in different communities .(7) Study of the epidemiological distribution of GBS serotypes may be different based on several aspects, containing studied population, the geographical region, and source of bacterial isolate. (8)

GBS can be subdivided into types Ia, Ib, Ic, II, and III. Almost, 99% of GBS strains can be belonged to one of these five antigen types. (9) In the United States and in some European countries, Ia, II, III and V are generally the most frequently isolates, and VI to IX serotypes are seldom detected. (6, 8, 10-12) In Brazil, the emerging of Ia, Ib, II, III, IV and V serotypes has been identified in a few studies in  South and the Southeast area .(13-18)

So, in this epidemiological study, we examined capsular genotypes of GBS by PCR regarding to antibiotic resistant pattern in clinical isolates by means of disk diffusion and broth dilution.

In this descriptive study, a total of 222 GBS isolated from clinical samples such as urine, skin and soft tissue, bone, joint, blood, CSF, pleural fluid. Clinical samples were gathered during two years (between June 2013 and May 2015) from Mofid Children hospital, Loghman Hakim hospital and Milad Hospital, Tehran, Iran. Appearance of GBS colonies on blood agar plates were gray-white and tiny colonies with a β-hemolysis halo. Primary identification was hemolytic, gram-positive cocci with catalase-negative reaction. GBS distinction from other streptococci was based on biochemical reactions including resistance to bacitracin and trimethoprim-sulfamethoxazole (SXT), sodium hippurate hydrolysis, and positive CAMP test. (2, 4, 9, 19-22)

Additionally, to ensure the reproducibility of the MICs for each strain, determinations were repeated three times. Streptococcus pneumoniae ATCC 49619 was used as quality control strain. For β – lactamase activity detection, a nitrocefin-based disc procedure (BD Diagnostics) was used. To detection of the inducible resistance phenotypes, erythromycin-clindamycin double-disk test was used. (23)

As the study is a descriptive, there is no need to state about statistical methods and software. 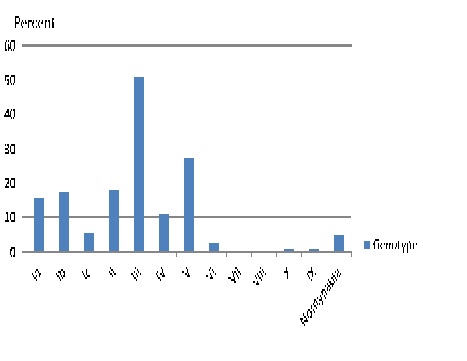 Widespread consumption of antibiotic prophylaxis to prevent early-onset GBS infections and monitoring for antimicrobial resistance is important for denoting both prevention and empiric therapy regimens.

Based on our finding, being more than 67.1% of isolates resistant to clindamycin and almost 57.2% resistant to erythromycin ,emphasis to do antimicrobial susceptibility testing for GBS strains isolated  from clinical specimens. Penicillin and ampicillin were recommended by CLSI 2015 as first-line agents for intrapartum antibiotic prophylaxis. Vancomycin is drug of choices in cases for only women at high risk because of occurring anaphylaxis shock due to penicillin. (5)

These data accompany with the other results are useful to define the importance of emergence and transmission of antibiotic resistance genes in GBS for supporting the decision of rational and economical program on specific antibiotics usage to treat GBS infections.

This difference in distribution could be attributed to vary in materials and methods of research, geographical region, profile of the population being studied, and source of the bacterial isolates .Even subtle regional differences in demographic data gathering can affect GBS serodistribution within the same country.

The second capsular antigens which we identified with high level in GBS isolates was capsular antigens V. This serotype able to cause invasive infections in neonates and adolescents may be considered an emerging public health concern. (8, 25, 40, 41)

All of differences related to the prevalence of genes related to antibiotic resistance may be explained by the different policies in the use of antimicrobials in different regions. The recognition of resistant strains in this study advance a proposal that these agents should be apply with precaution in the prophylaxis or remedy of GBS infection and that intermittent supervision is, therefore, needed to consider a proper therapeutic option in patients with allergy to β-lactam agents, necessary.

We conclude that GBS isolates represent various capsular antigens and resistant patterns relate to the origin of the sample, the studied population characteristics, different pattern of antibiotic consumption, and the geographical location. Dissemination and emergence of antibiotic-resistant GBS against erythromycin, tetracycline, and aminoglycoside are warning. Doing epidemiological studies and screening method for detection of MDR-GBS and appropriate drug prescriptions is recommended annually. PCR method particularly well adapted for GBS capsular antigens typing and detection of genes associated to resistance in large-scale epidemiological studies.

This research has been supported by research center laboratory  in school of allied medical sciences, Shahid Beheshti University of Medical Sciences, Tehran, Iran. A special thanks to Dr. Mir Davoud Omrani for all his assistance.