To study the risk factors and outcome of blood stream infection caused by non-fermenting gram negative bacilli (NFGNB) and their pattern of antibiotic susceptibility and genes. We included sepsis cases with blood culture positive for NFGNB. MIC for colistin was determined by broth microdilution method. Multiplex PCR was used to detect BlaIMP, BlaVIM, BlaKPC, BlaNDM-1 genes in cephalosporin and carbapenems resistant Acinetobacter spp. isolates. Out of 4,664 cases of sepsis, 50 (1.07%) were positive for NFGNB. Acinetobacter spp. 29 (58%) was the predominant isolate, of which 16 (55.17%) isolates were resistant to cephalosporins and carbapenems. We detected BlaKPC and BlaNDM-1 genes in two of these isolates. We did not detect BlaIMP, BlaVIM, BlaKPC and BlaNDM-1 genes in any other NFGNB isolates. Majority of the strains of Pseudomonas spp. showed sensitivity to all the antibiotics tested. NFGNB sepsis patients with respiratory illness correlated well with fatal outcome (p <0.05; OR 21). More numbers of Acinetobacter spp. sepsis cases had fatal outcome (p <0.05; OR 12.83). NFGNB sepsis patients with respiratory illness and those which yielded Acinetobacter spp. correlated positively with fatal outcome. We detected BlaKPC and BlaNDM-1 genes in two strains of drug resistant Acinetobacter spp.

Gram negative bacilli which are non-fermenters (NFGNB) are a heterogeneous category of microorganisms which do not have the ability to ferment sugars. NFGNB, which were considered as contaminants in the past, have emerged as important major pathogenic organisms responsible for causing a variety of infections in recent years1. NFGNB cause opportunistic healthcare-associated infections. They are commonly found on skin of healthcare-workers, instruments such as ventilator machines, humidifiers and mattresses2-4. Among NFGNB Burkholderia cepacia, Pseudomonas aeruginosa, Acinetobacter baumanni complex, Alcaligenes faecalis, Sphingomonas paucimobilis and Stenotrophomonas maltophilia are some pathogens known for causing health care associated bloodstream infections5.

Multidrug resistance (MDR) property of NFGNB is the reason that facilitated the way for the reconsideration of previously used antibiotic colistin into clinical use. For the treatment of infections caused by multi-drug resistant gram-negative bacilli (MDRGNB), colistin may have crucial and reliable role as potent antibiotic.6,7 The clinical use of colistin was restricted because of reports of serious nephrotoxicity and discovery of less toxic antibiotics6,7. So we intend to study the antibiotic sensitivity pattern of NFGNB from sepsis cases and correlate with the clinical condition of the patient. We also determine MIC of Colistin and also detect BlaIMP, BlaVIM, BlaKPC, BlaNDM-1 genes in cephalosporin and carbapenems resistant Acinetobacter spp. isolates.

It is a prospective time bound study conducted from (1st November 2018 to 30th April 2019) at the Microbiology laboratory of a tertiary care center. Sepsis cases with blood culture positive for NFGNB were included in the study. Blood culture samples which did not grow NFGNB and samples received on days other than the duration specified were excluded. Non random sampling strategy was used. Clinical data was taken from the records section of the hospital. Institutional ethics committee clearance has been taken for the project.

Bac T/Alert bottles with patient’s blood received in microbiology laboratory, for blood culture were processed as per protocol, in Bac T/Alert 3D system. From the positive bottles, the subcultures were done on MacConkey agar, Blood agar and Chocolate agar. The identification of NFGNB up to the species level was done by VITEK ®2 Compact(C) system using the Gram-negative Identification (GN-ID) 21341 card, and antibiotic sensitivity testing (AST) was done with AST 281 card. Both the Bac T/Alert 3D system and VITEK®2 Compact (C) system were from bioMerieux company (North Carolina, USA),

MIC for colistin by broth micro dilution method
MIC for colistin by broth microdilution method was carried out as per CLSI guidelines.8 A 100 mL stock solution of colistin sulfate (Sigma Aldrich, USA) of concentration 256 μg/mL was prepared according to the directions provided by the drug manufacturer. Two fold dilutions of the antibiotic were made to get a final dilution of 128, 64, 32, 16, 8, 4, 2, 1, 0.5 & 0.25 μg per ml of colistin respectively in wells 1 to 10 of microtitre plate.

Inoculum was prepared from 4 to 5 isolated colonies of similar colony morphology grown over night (18- 24 hours) on Mac Conkey’s agar. The colonies were inoculated into cation adjusted Mueller Hinton broth (CAMHB), kept at 37°C for 4 to 6 h to get log phase growth and adjusted to 0.5 McFarland (1 x 108 CFU/ml). This broth was repeatedly diluted to get the final concentration of bacteria as approximately 5 x 104 CFU/ ml. Now 10μl of inoculum was pipetted into wells 1 to 11. Well 11 acted as the growth control and 12th well as broth sterility control with sterile CAMHB. The microtitre plates were incubated for 12-18 h at 37°C. E. coli ATCC 25922 and P. aeruginosa ATCC 27853 were run as controls. The lowest concentration of antibiotic at which there is no visible growth of organism was taken as MIC endpoint. According to CLSI, ≤ 2 µg/ml and ≥ 4 µg/ml were considered as the susceptible and resistant break points respectively.

Multiplex PCR9,10
The DNA was extracted according to CDC protocol using boiling method. The primer sets were purchased from sigma Aldrich Pvt. Ltd (Table 1). The master mix was prepared by adding ready mix Taq PCR reaction mix with MgCl2 (Califormia, USA), in which the respective primer sets i.e, Forward (Fˈ) as well as Reverse (Rˈ) and the testing DNA were added and this master mix was subjected to amplification. Amplification was done with following cycling conditions;10 min denaturation at 95°C, then 35 cycles of (45s denaturation at 94°C, 45 s primer annealing at 54°C, and 50 s primer extension at 72°C). The last cycle, an additional 7 min extension step at 72°C in Rotor gene –Q (Qiagen, germany) and the products were kept at 4°C. The amplified product was detected by using 2% agarose gel electrophoresis. K.pneumoniae ATCC BAA 1705 and K.pnemoniae BAA 1706 were used as positive and negative control. Clinical isolates known to be positive for BlaIMP, BlaVIM BlaNDM-1 genes were also used as controls.

Table (1):
The primer sets were in PCR reaction.

Html code here! Replace this with any non empty text and that's it.

Table (2):
The antibiotic sensitivity pattern of Acinetobacter spp. isolated from blood of patients with symptoms of sepsis.

Table (3):
The antibiotic sensitivity pattern of Pseudomonas spp. isolated from blood of patients with symptoms of sepsis. 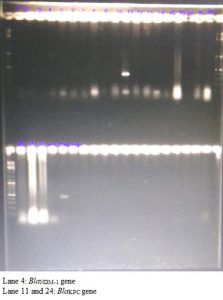