and Nor Atikah Husna Ahmad Nasir1

Mercury ions (Hg2+) are usually being discharged into water bodies without proper treatment. It is toxic, non-biodegradable and persistent naturally which leads to serious environmental problems. Through microbial approach, this study compares the efficiency of two types of fungi: R. oryzae and A. niger of common biosorption fungi in absorbing Hg2+ based on FTIR analysis, kinetic and isotherm studies. Both fungi were prepared into two forms which are live and dead biomass; and the Hg2+ was prepared at 10 and 100 ppm. FTIR analysis has identified existing functional group of hydroxyl, carboxylic and amino functional groups from both fungi, which are important in attracting Hg2+ ion. On average, 60-90% of Hg2+ was removed by both live and dead biomass of R. oryzae and A. niger at 10 and 100 ppm. Meanwhile, the highest sorption was achieved by dead cells of R. oryzae which is up to 90.38% at 100 ppm. In terms of kinetic studies, experimental data fitted to the Pseudo-second-order kinetic model, with correlation coefficient, R2 (0.9997), and Langmuir isotherm, which means the absorption process occurs on the homogenous surface that corresponds to the monolayer formation. Through these findings, the dead cells of A. niger and R. oryzae are better in sorption of Hg2+ compared to the live cells. Meanwhile, the rate of biosorption by R. oryzae is higher compared to A. niger. However, both fungi are excellent in biosorption of Hg2+ ions and could be an alternative to current physico-chemical methods used.

Heavy metal pollution can prompt serious water contamination and endangered aquatic life if untreated (Taloin et al., 2018). These metals ions are non-degradable and are persistent in the environment (Fu and Wang., 2011). Mercury ions (Hg2+) is an example of the recalcitrant and toxic metal ions found in water bodies and could cause gingivitis, congenital malformations, spontaneous abortion and damage to central nervous system (CNS) and brain in human (Gupta et al., 2016).

At present, regular strategies have been applied to utilize for expelling metal particles from wastewater such as synthetic precipitation, adsorptions on the actuated carbon, dissolvable extraction, solidify partition, and invert assimilation, particle trade and electrolytic techniques. Nevertheless, these procedures have limitations because of high capital and operational costs (Agarwal et al., 2006). Thus, as an alternative, biological removal techniques such as using microorganisms in biosorption is introduced.

In the current work, the biosorption of Hg2+ ions in aqueous solution has been conducted using fungi, R. oryzae and A. niger. These fungi were chosen due to their potential in a previous study (Taloin et al., 2018) on their absorption capacity and high effectiveness to absorb the metal ions. These microorganisms have negative cell membranes or cell walls that are able to attract the positive charged ions of metals in the solution (Taloin et al., 2018; Nakbanpote et al., 2007). However, different microbial species and viability might offer different rates of biosorption and offer dependent or independent metabolism (Abbas et al., 2014). Therefore, the aim of this research is to compare the biosorption potential using live and dead R. oryzae and A. niger on different Hg2+ concentrations.

Cultivating in Liquid Medium Yeast-Peptone-Glucose (YPG)
The spores and mycelium of R. oryzae and A. niger were scrapped and transferred into YPG medium (2 g/L peptone, 1g/L glucose1 and g/L yeast extract) before be incubated at 25°C, 130 rpm for 72 hours (Ahmad., 2005).

Filtration of Live Cells of R. oryzae and A. niger
R. oryzae and A. niger were filtered using 150 μm sieve after 72 hours of cultivation. The cells were washed using sterilized distilled water to remove any remaining growth media and kept at 4°C until further use (Ahmad., 2005).

Microscopic Analysis
The morphology of both live and dead fungus, R. oryzae and A. niger were analyzed at 400X magnification using a light microscope to identify the differences on their morphology structures that role in biosorption of Hg2+ ions.

Preparation of Hg2+ solution
A standard of Hg2+ solution on 100 mg/L and 10 mg/L were diluted and adjusted using nitric acid. The solutions were than filtered through 0.45 μm membrane filters for further analyses (Martinez-Juarez et al. 2012).

Biosorbents Characterization using FTIR
Fourier- Transform Infrared Spectroscopy (FTIR) were recorded in Perkin-Elmer FTIR spectrometer to determine functional groups in relation to binding of Hg2+. R. oryzae and A. niger of both live and dead fungi were collected before and after the absorption period (Chen et al., 2012). FTIR was measured at wavenumber from 400 to 4000 cm-1.

Biosorption Kinetics
0.1 g of live and dead cells were added to 10 and 100 ppm concentration of Hg2+ samples in 100 mL Erlenmeyer flasks. The samples were placed in an incubator shaker at fixed conditions; 130 rpm and room temperature. The supernatant was collected at every hour (for 8 hours) and filtered through 0.45 μm membrane filters (Kapoor et al., 1999). The filtered samples were analyzed for dissolve metals concentration using ICP-OES. The experimental data were analyzed by two model kinetics, which are the Langergren’s model, Pseudo-first-order reaction (Eq. 1) and the Ho’s model, Pseudo second-order reaction (Eq. 2) (Chen et al., 2012)

Microscopic Analysis
Fig. 1 illustrates the morphological structure of the R. oryzae and A. niger cells under 400x magnification. In Fig. 1, the spores of the live cell of R. oryzae and A. niger are abundant compared to the dead cells. This is because dead cells have no active metabolism activity thus; the cells or spores shown are less compared to live cells (Abbas et al., 2014).

FTIR Analysis
Fig. 2 – 7 show the changes of functional groups of live and dead cells of R. oryzae and A. niger after biosorption of Hg2+ in 10 and 100 ppm. Fig. 2. FTIR data of dead cells of A. niger before and after the absorption in 10 ppm Hg2+ Fig. 3. FTIR data of dead cells of A. niger before and after the absorption in 100 ppm Hg2+ Fig. 4. FTIR data of dead cells of R. oryzae before and after the absorption in 10 ppm Hg2+ Fig. 5. FTIR data of dead cells of R. oryzae before and after the absorption in 100 ppm Hg2+ Fig. 6. FTIR data of live cells of A. niger before and after the absorption in 10 ppm Hg2+ Fig. 7. FTIR data of live cells of R.oryzae before and after the absorption in 10 ppm Hg2+

Overall, all the biosorption bands of Hg2+ were shifted downward, and the functional group position remained unchanged. The biosorption of Hg2+ before and after have shown the spectra peaks is either decreased or even disappeared in intensity might be due to metal adsorption (Malkoc and Nuhoglu, 2005). The shifts in the absorption bands showed that there was an adsorption of Hg2+ ions on the live and dead cells of R. oryzae and A. niger. The presence of hydroxyl, carboxylic and amino functional groups was an important interaction with Hg2+ ions. Referring to Fig. 2 to 7, the characteristics of the biosorption bands of OH and NH were identified between 3200-3600 cm-1, and the carboxylic and phenolic stretching bands appeared at 2800-2900 cm-1. The strong peak of C=O stretching showed at 1600-1700 cm-1. The fungal cell walls have a variety of ligands such as carboxyl, amine, hydroxyl, phosphate and sulfhydryl groups that are involved in metal chelation. Thus lead positive metal ion (Hg2+) being absorbed by negative charges on the cell (Gupta et al., 2000).

Metal Uptake Analysis ICP-OES
Fig. 8 illustrates the proportion of removal efficiency of metal uptake activity in live and dead cells of R. oryzae and A. niger at 10 and 100 ppm of Hg2+ ions were analyzed using ICP-OES. 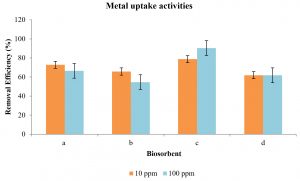 In both fungi, the highest absorbent was achieved by using dead cells compared to live fungal biomass. The dead biomass offers greater metal binding capability because the presence of active cellular metabolism in the cell will hinder the biosorption efficiency (Velizar et al., 2010).

Biosorption Kinetics
The kinetic studies were performed to evaluate the biosorption reached equilibrium contact time. Fig. 9 shows the Hg2+ biosorption with dead and live cells of R. oryzae and A. niger at 10 ppm, meanwhile, Fig. 10 shows the Hg2+ sorption at 100 ppm. 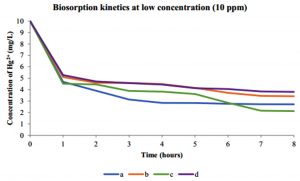 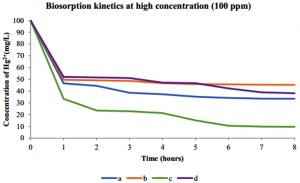 Fig. 9 and 10 show the concentration of Hg2+ ions adsorbed decreased dramatically with increasing contact time, then its reached equilibrium or constant biosorption after seven (7) hours. From the plot, there are two phases of the biosorption which are initial rapid phase (0-1 hour) and slower second phase (6-8 hour).

At 0-1 hour, the biosorption was fast and drop up to 50% of equilibrium uptake of its saturation capacity in both dead and live cells of R. oryzae and A. niger. Meanwhile at 6-8 hour, the total metal biosorption of Hg2+ were plateau, indicating the absorption has reached its limit. Table (1):
The kinetic data of Pseudo-first-order reaction for live and dead R.oryzae and A. niger. Based on Table 2, the R2 values for all cells is closer to 1, indicating it fits well with the Pseudo-second-order reaction. In fact, the graph also shows the constant rate between adsorbed amounts at the equilibrium is increased when the contact time is increased. Since the biosorption occur followed by the Pseudo-second-order mechanisms, the rate was proportional to the square of the number of remaining sites. According to this model, it is assumed if a divalent ion binds to the two monovalent negatively charged sites, the rate should be proportional to the square of the free surface sites.

Table (2):
The kinetic data of Pseudo-second-order reaction for live and dead R.oryzae and A.niger.

It is also suggested the biosorption process is depend on the concentration of the biosorbent and absorbate which means chemical sorption involving sharing and exchanging of electron might occur (Iram et al., 2010). Additionally, the K2 values are much smaller than K1 values, which means that the absorption rate increased in time and the absorption rate was proportional to number of unoccupied sites.

Biosorption Isotherm Analysis
The parameters obtained from Langmuir and Freundlich models for the removal of Hg2+ ions are represented in Table 3.

For Freundlich isotherm, the constant values of KF and 1/n are 0.4172 mg/g, 0.3003 mg/g and 1.0378, 2.2577. Generally, the value of n < 1 indicates the adsorption intensity was favourable over the whole range of concentrations, while n > 1 implies that the adsorption intensity was favourable at high concentrations but less favourable at lower concentrations (Degs et al., 2003). A value of 1/n below one (1) indicates a normal Freundlich isotherm while 1/n above one (1) is an indicative of cooperative adsorption (Amin, 2008). The correlation coefficient, R2, the Freundlich isotherm are 0.9884 and 0.9578, is slightly lower than the Langmuir model (0.9809 and 0.9960), indicating that the experimental data best fitted with Langmuir isotherm. Thus, the adsorption between Hg2+ and dead and live biomass of R. oryzae and A.niger was assumed to occur on a homogenous surface of adsorbent via chemisorption and physiosorption.

AUTHORS’ CONTRIBUTION
All authors have made a substantial, direct, and intellectual contribution to the work and approve it for publication.