To minimize exposure to hazardous biological materials, all doctors, nurses, technicians and in general all the healthcare personnel as well as researchers wear a knee-length, long-sleeved, elastic-cuffed laboratory coat while working with hazardous materials. A white coat provides a protective layer and can be easily removed if contaminated. White coats act as mechanical vectors in transmission of pathogenic and non-pathogenic bacteria to the people who are associated with health care workers. A total of 120 specimens were collected by using sterile cotton swabs. Of these, 88 (73%) white coats were contaminated. At the same time, a pre-validated and semi-structured questionnaire (containing questions regarding usage of white coat, purpose, hygiene, and perception about contamination of white coats, etc) was distributed. Gram positive cocci 64 (72.72%) were isolated more than gram negative bacilli 24 (27.28%). Most of the tested antibiotics showed resistance to isolated gram positive and gram negative bacteria. 10 (41.66%) isolates of gram negative bacilli were resistant to extended spectrum beta-lactamases (ESBL) and 10 (6.4%) of staphylococcal isolates showed Methicillin resistance. Therefore, a much more attention to wear a clean white coat should be required.

White coat to a person in medical field is just like what skin is to a human1. To protect their street clothes from contamination, medical and laboratory professionals wear a knee length over coat which is known as white coat2. It is a symbol of professionalism, identification3, trust and respect from others, where white color indicates purity and goodness1,3-7. In many medical institutions “White Coat Ceremony” is conducted to welcome MBBS students to the medical field8,9.

To minimize exposure to hazardous biological materials, proper clothing and/or personal protective equipment (PPE) should provide reasonably complete coverage of the skin and clothing.  Most of the Scientists and Doctors prefer to wear a knee-length, long-sleeved, elastic-cuffed white coat while working with hazardous materials.  A white coat provides a protective layer and can be easily removed if contaminated. Reusable white coats should be cleaned regularly14

White coats are worn by all medical practitioners. However, when, how and where they wear and wash their white coats varies from person to person and even between different institutions5. Healthcare workers and students commonly wear white coats in restaurants, libraries, super-marts etc and also keep them in vehicles and office3, 3,8,11. Pediatricians and Psychiatrists generally prefer not to wear white coats in order to decrease anxiety among these categories of patients7,12. Transient increase in blood pressure of patient by just seeing a doctor in a white coat is known as “white coat syndrome”12.

Despite practicing strict infection control measures, white coats act as mechanical vectors in transmission of pathogenic and non-pathogenic bacteria to the people who are associated with health care workers1. Healthcare- associated infections (HAI`s) pose a great risk of morbidity and mortality, as well as increased length of stay in hospital and cost of treatment2,6,11. Some antibiotic resistant strains like MRSA, which may spread among clinical and nonclinical persons, are found on white coats.3,5,11,13. This finding suggests that the health management of the hospital does not give enough relevance to the white coat use.

Specimen were collected from pre-clinical, para-clinical M.B.B.S students, staff nurses and resident doctors by using sterile cotton swabs moistened with sterile physiological saline. Swabs were gently rotated to the front side of the lower edge of the white coat. Swabs were labeled properly and transported immediately to the Microbiology laboratory (D.Y. Patil Hospital and Research Institute, Kolhapur).

Swabs were inoculated into MacConkey agar and Blood agar and incubated at 37°C for 24 hours. After incubation, growth was confirmed by colony morphology on agar plates and gram stained smears of colonies. Biochemical reactions (Catalase, Oxidase, Indole, MR, VP, Citrate, Urease, TSI etc) and Antibiotic sensitivity testing were performed as per the standard guidelines. Phenotypic confirmation of MRSA and ESBL was also performed as per the CLSI guidelines 2018.19

At the same time, a pre-validated and semi-structured questionnaire (containing questions regarding usage of white coat, purpose, hygiene, and perception about contamination of white coats, etc) was distributed among the same 120 persons from whom the swabs were collected. 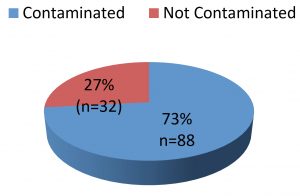 All the isolated gram negative bacteria were screened for Extended Spectrum beta-lactamases (ESBL) by using Ceftazidime and Ceftazidime+ Caluvanic acid discs (Table 3). Of these 24 gram negative isolates 10 (41.66%) were shown to be ESBL producers (CLSI Guidelines 2018)

Traditionally, the white coat is considered to bring credibility and dignity to the medical profession,20 but nowadays white coats harbor potential contaminants and these may play an important role in the transmission of pathogenic micro-organisms and resistant determinants.

High rate of the bacterial contamination of white coats is associated with the following factors:

Continuous shedding of infectious microorganisms by patients in hospital environment, who may constantly be in contact with hospital health care workers,

Survival of Microorganisms between 10-98 days on fabrics (Cotton, Polyester etc.) 21,22

Our institution is a tertiary care hospital, medical college and research institute. Medical students who work in the clinical wards indiscriminately use the white coats even outside the hospital premises.

In our study, male participants were 60% and female participants were 40% [Fig. 1]. In the present study, 73% of the white coats which were screened were contaminated with bacteria [Fig. 2]. Our study shows a similar rate of contamination like Mwamungule et al. 2015. They conducted a study on white coats among 107 health care workers in major risky departments (Obstetrics and Gynecology, the out-patient department, Laboratory department, Intensive care unit, Medicine, Pediatrics and Surgery). Of these, they found that 94 (72.8%) were contaminated. This study included hospital personnel except students or interns; hence they found a high rate of contamination.

Other studies have reported contamination rates of white coats ranging from 23 % to 91.3% (Uneke et al. 201021, Treakle et al. 200018, Qaday et al. 20155). This varying rate of contamination may be due to the type of the clinical facilities in which the study was conducted.

Table 1 shows that, Gram negative bacilli (27.28%). were isolated in lesser number. This is comparable to the other findings such as A.A Akanbi et al. 2017 (26.21%) 26 . In our study, E. coli were 13.63%, Klebsiella spp (9.09%) and Pseudomonas (4.54%). All these microorganisms are frequently found in the hospital environment, but they have also been implicated as causative agents in nosocomial infections.26

As shown in Table 2 coagulase negative Staphylococci (CONS) were the most commonly isolated bacteria (54.54%), followed by S.aureus (18.18%). Gram positive bacteria are more frequently seen in animate and inanimate surfaces and all major implant devices used in hospitals as compared to gram negative bacteria. Our finding is similar to Trupti B. Naik et al. 2015 (54.45%). They conducted a study on white coats among 2nd Year MBBS students who were not frequently exposed to clinical settings and concluded that these Staphylococci may be normal commensal bacteria. Previously, CONS were considered as harmless; but nowadays, due to advances in medical technology like indwelling foreign devices such as joint prosthesis, vascular grafts etc, CONS has emerged as a potential pathogen in hospital environment. However other studies have found S.aureus as the predominant organism contaminating the white coats. (Qaday at al 20155, Saxena et al. 201325, Banu et al. 20128). This might be due to the difference in the working sites (like ICU, Wards, Accident &Emergency department etc.) of the people on whom the study was conducted.

In our study, Methicillin Resistant Staphylococci were isolated from 10 isolates [Table 5]. Of these, 3 isolates (4.68%) were MRSA and 7 (10.93%) were MRCONS. Our finding was lower than the study of Reza et al. 2013(18.18%). Our study was at the tertiary care level, were our faculty is aware about antibiotic resistance and the antibiotic policy of our hospital.

As seen in table 6, we found that usage of the white coats in hospital and college is more (82.92%), followed by volunteers (55%) using it in non-clinical areas (canteens, tea-stalls, reading rooms, temple) and this is highly significant. This finding is similar to the findings reported by Noor et al.11. Our study indicates that participants were not aware or do not have the knowledge that white coat harbours microorganisms that may cause nosocomial infection in patients.

Most of the subjects (45%) preferred washing their coats twice a week, however ‘plateau effect’ (contamination reaching Constant steady state) occurs within a week; thereafter there is no considerable variation in contamination level2,3,13. In this study we found that white coats of subjects coming from hostels were more contaminated (55%) than those coming from home (45%). This is statistically significant [P=0.034]. In some studies, it was shown that in people residing at home, white coats were more contaminated than those who reside at hostel indicating risk of spreading HAI to community due to improper handling of white coats in homes and traveling13. Among the subjects who used the white coats for more than 2 hours (75.65%), the contamination rate was less than the subjects who wear it all time (78.57%). This may be due to the fact that some subjects did not believe that white coats could harbor potential harmful pathogens that may be risky. Hence they continued to wear white coats all the time during the service and thought that white coat was a dress code or fashion statement, in and outside the hospital premises.

In most of the volunteers who exchanged the white coats with other colleagues during the services, high (74.57%) contamination was found; indicating that continuous usage of white coats can harbor more potential pathogens and transfer cross infection to others. White-coats of volunteers which were having more stains were heavily contaminated (81.05%). This may be due to improper handling of syringes and blood products during the management of patients in wards, emergency services such as accidents, trauma cases etc. Regular washing with detergents and disinfectants can reduce the microbial load in white coats but sometimes the subjects forget to carry along and wash the white-coats regularly at home. Some hospitals arrange special services for laundering the white coats and keep an alarm system to remind the HCWs about washing their white coats in order to reduce the burden of microbial load in white-coats.

Therefore, it can be concluded that white-coats are potential sources of cross infection. Yearly purchase of white coats and use of 2 or more coats for each person should be made compulsory. White coats should be washed at least once weekly by using a disinfectant and strong detergent. We must ban the use of white coats in non-clinical areas such a canteen, library etc.

Limitations
This study only evaluates the white coats of health-care workers. Further studies are required to evaluate the detailed levels of bacterial contamination of different fomites and mandate a strict audit process and protocols to be set in place for preventing the contamination.

ACKNOWLEDGMENTS
We would like to express our heartfelt gratitude to the laboratory technician of Krisna Diagnostics Pvt. Ltd, Kolhapur for assistance in technical work. We offer our thanks to our statisican Mrs. Manjari Desai for providing assistance in data analysis. We would like to thank the Teaching staff of Department of Microbiology, D.Y Patil Medical College, Kolhapur for their constant support and encouragement. we also thank the Nursing staff from D.Y Patil Hospital and Research institute, Kolhapur for guiding in sample collection.