Diabetes mellitus (DM) has been considered as one of the predisposing factors for candiduria and Candida urinary tract infections. The study determined the socio-demographic characteristics, risk factors of DM patients with asymptomatic candiduria and ascertained the prevalence, virulence factors and antifungal susceptibility of Candida isolated. Socio-demographic and risk factors were obtained via questionnaires. Microscopic, macroscopic and chemical analysis of mid-stream urine (MSU) samples were determined by microbiological method and dipsticks. The characterization, virulence factors, antibiotic susceptibility of Candida isolates were determined by conventional, mycological media and disc diffusion techniques, respectively. Of the 51 MSU samples, ≥ 31.4% were amber and clear in colour, contained yeast cells and leukocytes; between 5.9 to 25.5% had hyaline casts, urobilinogen, epithelial cells, red blood cells, pus cells and nitrite, while the specific gravity was ≥ 1.015. The prevalence of candiduria among subjects with respect to age, types and duration of diabetes, gender, tobacco and alcohol consumption were not significant (p ≥ 0.005). Candida dubliniensis and C. parapsilosis prevalence was highest in subjects with random blood sugar (mg/dL) of ≥ 400 and 300-399, respectively. Of the 39 isolates, 64.1% were Fluconazole sensitive, 10.3% were dose dependent susceptible to Ketoconazole, 74.4% exhibited Voriconazole sensitivity, 100% C. dubliniensis were Clotrimazole sensitive, ≤ 28.6% C. tropicalis and C. glabrata were resistant to Amphotericin B and Itraconazole, while between 23.1% and 71.8% isolates produced hydrolytic enzymes and biofilm. This study revealed the socio-demographic characteristics and risk factors among subjects and the necessity to continuously investigate pathogenic Candida against antifungal agents for effective treatments of asymptomatic candiduria in diabetes mellitus patients.

The urinary tract consists of organs of the body involved in the production, storage and excretion of urine (Beer et al., 2006). The urinary tract is sterile, devoid of microorganisms but may be invaded by pathogenic organisms (Akinjogunla et al., 2010). Several studies have revealed increase in urinary tract infections (UTIs), attributable to Candida spp (Yashavanth et al., 2013). Candida species are thin-walled, dimorphic fungi (8 to 12 µm in diameter), that reproduce by budding (Talaro and Talaro, 1996). Although, >150 Candida spp have been reported, only few cause human diseases (Kwon-Chung et al., 1992). Candiduria, the presence of Candida spp such as C. albicans, C. glabrata, C. krusei, C. tropicalis and C. parapsilosis in urine, is classified into asymptomatic and symptomatic forms. Candiduria can lead to morbidity and mortality in immunocompromised and ill-patients (Sanglard and Odds, 2002). Candida spp promptly react to environmental changes and take advantage of compromised immunity for establishment of diseases (Akinjogunla et al., 2017). The emergence of drug‑resistant Candida spp is attributable to the use of prolonged and inappropriate empirical therapy which has further complicated the management of patients (Chakrabarti et al., 1996). Thus, it’s important to appropriately identify the causal agents of the infection and administer proper treatment so as to prevent the disease from becoming chronic.

Administration of Questionnaires
Structured questionnaires reflecting the socio-demographic characteristics and associated risk factors were administered to the participants after their verbal informed consent.

Inclusion Criteria
The diabetic patients who agreed and gave verbal consent to participate in the study.

Chemical (Dipstick) Analysis of Mid-stream Urine Samples
The chemical analysis of MSU samples was carried out using dipsticks (Medi-Test Combi 10 SGL, Macherey-Nagel, Germany). The parameters evaluated were: urobilinogen, leukocytes, protein, ketone, bilirubin, nitrites, specific gravity and blood. The dipstick was dipped into each fresh uncentrifuged MSU sample and removed after 5-10 secs. A colour change of the dipstick within 2 mins was observed and recorded according to the manufacturer’s instructions.

Mycological Analysis of Mid-stream Urine Samples
A loopful of each MSU sample was aseptically inoculated onto each plate of Sabouraud Dextrose Agar (SDA, Oxoid UK) supplemented with chloramphenicol and aerobically incubated at 35°C for 48 hrs. After incubation, the plates were observed for yeast growth and were subcultured onto fresh plates of SDA and incubated at 35°C ± 2 for 48 hr. After incubation, the pure isolates were subcultured onto plates of CHROMagar Candida (Difco BBL., USA), aerobically incubated at 35°C ± 2 for 48 hr and their colonial morphology and pigmentation on CHROMagar Candida were used for identification. The Candida species were further identified using Gram staining, temperature tolerance, chlamydospore and germ tube formation, sugar fermentation and assimilation tests. The Candida isolates were maintained on SDA slant at 4°C.

Detection of Biofilm Producing Candida Isolates
A loopful of each Candida isolate from overnight agar plate was aseptically inoculated onto each tube of Glucose-Sabouraud Dextrose Broth (10 ml SDB, 2% glucose). Each tube was incubated aerobically for 48 hrs at 35°C ± 2. After incubation, the contents of each tube were poured out, each tube washed with phosphate buffer saline (PBS, pH 7.2), dried and stained with safranin (1%). Excess stain in each tube was rinsed with PBS and tubes dried in an inverted position. A biofilm formation was indicated when a visible film lined the wall and bottom of the tube (Deorukhkar et al., 2014; Akinjogunla et al., 2107).

Detection of Coagulase Producing Candida Isolates
The production of coagulase by Candida isolates was determined using EDTA-human plasma. Ten microlitre of each Candida isolate from overnight agar plate was aseptically inoculated onto each tube of EDTA-human plasma. Each tube was incubated at 35°C ± 2 and observed for clot formation after 2, 4, 6 and 24 hr. The presence of clot that could not be resuspended by gentle shaking indicated positive for coagulase production (Rodrigues et al., 2003).

The microscopic analysis of MSU samples based on age and gender of subjects are shown on Table 1. Of the 51 samples collected, 13.7%, 25.5%, 35.3%, 9.8%, 13.7%, 5.9% and 11.8% had epithelial cells, pus cells, yeast cells, granular cast, crystals, hyaline casts and red blood cells (RBCs), respectively. The occurrence of epithelial cells, pus cells, yeast cells, crystals, hyaline casts and RBCs was higher in female subjects and those aged ≥ 40 yrs than male subjects and those aged < 40 yrs. Only 5.9% MSU samples of subjects aged ≥ 40 yrs contained hyaline casts, while none of the samples of subjects within age group < 40 yrs had hyaline casts (Table 1).

Table (1):
Microscopic Analysis of Urine Samples of Diabetic Patients Based on Age and Gender. 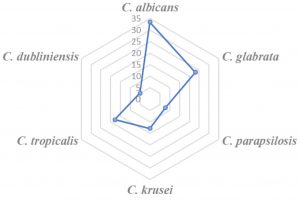 Table (4):
Distribution of Candida Isolates Based on Age, Gender and RBS Values of Diabetic (Candiduric) Patients.

Table 6 shows the distribution of virulence factors in Candida isolates from MSU samples of subjects. The percentage occurrence of each virulence factor was as follows: 38.5% amylase, 30.8% lipase, 25.6% coagulase and 23.1% biofilm. A higher prevalence, > 50%, was observed for haemolysin, phospholipase, gelatinase and caseinase (71.8%, 59.0%, 61.5% and 64.1%, respectively). Among candida isolates showing biofilm formation were C. albicans (n=5), C. glabrata (n=2), C. parapsilosis (n=1) and C. tropicalis (n=1) while none of the C. dubliniensis and C. krusei were amylase, coagulase and biofilm producers (Table 6).

Candida albicans, C. krusei, C. tropicalis, C. glabrata, C. dubliniensis and C. parapsilosis were isolated from MSU of DM patients in our study with random blood sugar ranging from 200 to ≥ 400 mg/dL. Isolation of non albicans Candida (NAC) from MSU of DM patients in our study corroborated the previous findings of Pandey and Pandey (2013) who reported the emergence of NAC in MSU of diabetic patients at Gwalior, India. The percentage occurrence of NAC (66.7%) in MSU of DM patients was higher than C. albicans (33.3%) and this agreed with the results of Ekpo et al. (2017) in Cameroon. Our observation also concurred with Kauffmann (2005) who reported that >50% of urinary Candida isolates were NAC.

The susceptibility of Candida spp to antifungal agents is not often predictable, hence, investigating pathogenic Candida isolates against appropriate antifungal agents is required for effective treatments of patients. In our study, 20.5% Fluconazole and 20.5% Itraconazole resistant Candida spp were obtained and these values were > 13% Fluconazole and 18.5% Itraconazole resistant Candida spp reported by Sojakova et al. (2004). The resistance of Candida spp to Ketoconazole in this study correlated with the reports of Hugo and Russell (2007). Over-expression of CtERG11 or CDR1/CDR2 gene (Sanglard and Odds, 2002), over-expression of efflux proteins which act by pumping the drug out of the cell at a rate faster rate than how the drug enters the cell (Akinjogunla and Eghafona, 2012) and modifications of target enzymes have been attributed to the resistance of Candida spp to azole group of antifungal agents (Silva et al., 2011). A high percentage of Amphotericin B sensitive C. albicans, C. parapsilosis and C. tropicalis was observed and this substantiated the findings of Metin et al. (2011).

This study has shown the socio-demographic characteristics and risk factors in diabetic mellitus patients with or without candiduria; revealed the high sensitivity of Candida isolates to azole drugs and varied percentages of haemolysin, coagulase, biofilm, phospholipase and lipase producing Candida isolates in MSU samples and as well showed the necessity to continuously investigate pathogenic candida isolates against appropriate antifungal agents for effective treatments of asymptomatic candiduria in type 1 and 2 diabetes mellitus patients.

ACKNOWLEDGMENTS
The authors vastly acknowledged all the participants and support staff who participated in this study.

ETHICS STATEMENT
The study protocol was in accordance with ethical procedures and recommendations of State Hospitals Management Boards guidelines.

AVAILABILITY OF DATA
The dataset used and/or analyzed during the current study are included in the manuscript.