Fungi can cause airborne diseases that need to consider in health plans due to its risk and threats of many communities worldwide. This study aims to assess indoor air quality of laboratory room environment for health industry sector. Open plate method was used to collect and culture of airborne fungi from 12 rooms of laboratories in faculty and hospital buildings. Identification of filamentous fungi grown on culture plates was based on standard mycological texts and manual. The results showed that the occurrence frequency and relative abundance were used to show the risk of airborne fungi. The colony forming unit of fungi species isolated from air samples of faculty and hospital laboratories were 304 and 83 respectively. Thirteen fungi genera including twenty-one species were identified overall air samples. The predominant fungi were Aspergillus, Penicillium and Alternaria among fungi. Among these species the most prevalence fungi was Penicillium chrysogenum at the highest at species level. Therefore, it is essential to set urgent steps to enhance the indoor air quality in laboratory environment such as providing air purification system in these labs.

Airborne microorganisms scattered everywhere in both outdoor and indoor environments. Many common infections in both human and animals can spread by airborne transmission (Shams-Ghahfarokhi et al., 2014). Airborne transmission increases the opportunity of human exposure to pathogenic microorganisms during breathing the polluted air or contamination of food and water (Durugbo et al., 2012; Fernstrom & Goldblatt, 2013; Martםnez-Herrera et al., 2016). Airborne fungi is the most important part of human pathogens which cause several human health problems such as allergic, contagious, infectious, and respiratory diseases (Gots et al., 2003).

Airborne microorganisms scattered everywhere in both outdoor and indoor environments. Many common infections in both human and animals can spread by airborne transmission (Shams-Ghahfarokhi et. al., 2014). Airborne transmission increases the opportunity of human exposure to pathogenic microorganisms during breathing the polluted air or contamination of food and water (Durugbo et. al., 2012; Fernstrom & Goldblatt, 2013; Martínez-Herrera et al., 2016). Airborne fungi is the most important part of human pathogens which cause several human health problems such as allergic, contagious, infectious, and respiratory diseases (Gots et. al., 2003).

Fungi spread in building via ventilation, air outdoor intakes, human movement, building materials and others. Fungal growth and sporulation occur with increasing of humidity of air (Shelton et. al., 2002). Many studies have been reported the elevated concentrations of fungi in air samples of some critical indoor environments such as health care facilities. Particularly, high frequency levels of Aspergillus sp., Cladosporium sp. , Penicillium sp. and  Alternaria sp. were recorded by Pavan and Manjunath (2014); Tong et al. (2017); Gonçalves et al. (2017). These fungi produce large quantities of spores that easily spread over a wide area. Spores also remain dominant for a long period of time during unfavorable conditions. Although, the abundance of some fungi species showed a link with different seasons of the year (Mebi et. al., 2012). Iraq is one of the west Asia countries that characterize with the sunny weather. Average temperatures in Iraq range from 48 °C (118.4 ° F) in July and August to zero occasionally in January. Winds accompanied by dust sometimes comes at intervals of the year because low rainfall in winter over the past few years. Thus it is expected that increase number of airborne diseases during this conditions. Therefore, this study aims to assess indoor air quality of various laboratories from Faculty and hospital buildings located in Thi-Qar Governorate southern of Iraq.

The open plate method (Kumari et al., 2016) was adopted to collect and analysis air samples from indoor environment of two distinct sites. The selected sites included room laboratories of biology department in Faculty of Science, University of Thi-Qar and pathogenic analysis laboratories in Suq Alshuyukh public hospital. A total of 36 plates of Sabouraud dextrose agar (SDA) containing chloramphenicol (Oxoid, France) were prepared and exposed to air for the experiment. The plates were distributed in 12 groups, three plates for each room. Five rooms of hospital laboratories were tested to assess the indoor environments of this facility and namely: Microbiology unit, Serology unit, Viruses unit, Parasitology unit and Samples Collection unit. At the faculty laboratories, twenty one plates were exposed in seven rooms. The opened plates for air were left at least for 5 hours during working hours, when students, workers and patients were present in these locations. The culture plates were incubated at 30°C for 3 to 5 days. Then, the isolates were identified based on morphological and microscopic characteristics using standard mycological texts and manuals (Kidd et al., 2016).

Statistical analysis
The occurrence frequency and relative abundance were computed depending on colony forming unit (CFU) of fungal species, genera or a fungi group to show the exposure risk of collected fungi as described by (Chan et al., 2008).

The results revealed that all a total of 36 plates were positive to at least one colony of fungi species. The colony forming unit (CFU) of fungi species was 304 colonies grown on 21 plates distributed in biology laboratories of faculty and 83 colonies grown on 15 plates distributed in Hospital laboratories. Over all air samples in both faculty and hospital fungi populations, thirteen fungi genera including twenty-one species were identified (Table 1). 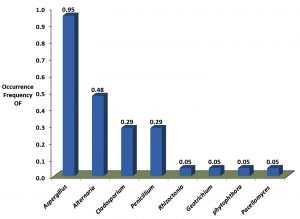 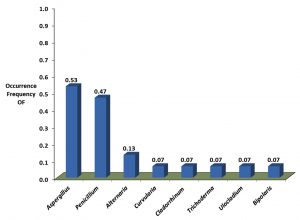 Table (2):
Relative abundance depending on colony forming unit CFU for both fungi populations from Faculty and Hospital laboratories. Airborne fungi usually spread their spores in the ambient air. Qualitative knowledge of spread of these fungi in our regions is of great importance to avoid several respiratory diseases such as asthma and rhinitis that can be occurred in human (Menezs et al., 2004). This study revealed that a great abundance of fungal species isolated from air samples in two distinct sites (faculty and hospital laboratories).

The most dominate fungal genera in our findings were Aspergillus and Penicillium due to the ability of their spores to easily spread in various aerobic environments (Asan et al., 2003). In particular, Aspergillus is characterized by production of small conidial spores which are a widespread in air environment of tropical regions (Rosas et al., 1992). However, previous study suggested that fungal spores spread from outdoor to indoor environment through staff, visitors, patients and ventilation systems (Kiasat et al., 2017).

The existence of some fungi species in hospital associated with specific location, such as Penicillium had strong relevance with serology unit, while the existence of Aspergillus and Cladosporium linked with microbiology unit in both hospital and faculty. This is in agreement with previous study (Sepahvand et al., 2013).

ACKNOWLEDGMENTS
The authors acknowledge the staff of laboratories of Suq Alshuyukh public hospital to facilitate access into the laboratory.

AUTHORS’ CONTRIBUTION
MHA and RA carried out the experiment. AKA wrote the manuscript with support from MHA who conceived the original idea. SE supervised the project. All authors read and approved the manuscript for publication.