Boswellia carteri (B. carteri; also known as Birdwood or Birdw) is a moderate-to-large sized endemic tree mostly found in the dry mountainous regions of Somalia, Saudi Arabia, Sudan, and Yemen1. The extracts from Boswellia species have been widely plethora of conditions such as asthma, arthritis, rhinitis, analgesic effect, gastric & hepatic disorders, skin diseases, cancer as well as inflammatory associated diseases in human2-6.

The plants of Boswellia species are a rich source of natural resins and several bioactive compounds7-9. Moreover, essential oils extracted from B. carteri have been reported to exhibit antifungal activity against Candida species10, Stachybotrys chartarum,11 Trichotecium roseum11, and toxigenic Aspergillus species11-14. Alternaria alternata (A. alternata) is an opportunistic fungus that causes leaf spots and blights of many economically important plants15. Helminthosporium rostratum (H. rostratum) is a saprobic fungus that infects several plants including corn, rice, maize, millet, and sorghum16. Fusarium solani (F. solani) is a filamentous fungus known to infect several crops including beans, cucurbits, potatoes, and peas17.

Sample Collection
The oleo-gum resin of B. carteri was procured from authorized suppliers (Bin mingash store, Riyadh, Saudi Arabia), or collected from the plant (B. carteri) grown in the region of Riyadh, Saudi Arabia. The sourced plant material was stored overnight at -80°C. The collected gum resins were powdered using mortar, pestle, blender, and electric sieve. The powdered resins were stored at -20°C until further use.

Preparation of Crude Aqueous Extract
Briefly, 30 g of the crushed material was soaked for 24 hours in 300 mL distilled water (10% w/v) at room temperature (37°C). The soaked material was macerated with 50 mL distilled water (10% w/v) in a conical flask and kept in an orbital shaker (250 rpm at 45°C for 24 hours). The extracts were then concentrated and dried under reduced pressure and 40°C using a rotary evaporator (Rotavapor® R-215, BUCHI). All the filtered extracts were preserved aseptically in glass bottles at 4°C until further use.

Three concentrations of the aqueous extract (1, 2.5, and 5 mg/mL) were prepared using sterile aqueous extracts and with distilled water (10% w/v). The reconstituted aqueous extracts were passed through 0.45µM bacterial filter papers (Millipore Inc., Riyadh, Saudi Arabia) prior to using them for in vitro studies.

Fungal specimens
Fungal strains of A. alternata, H. rostratum, and F. solani were obtained from the Department of Plant Protection, College of Food and Agricultural Sciences, King Saud University, Riyadh, Saudi Arabia. Fungal isolates were maintained on potato dextrose agar, stored at 4°C and subcultured once a month.

Antifungal screening
Antifungal activity was determined using the poisoned food technique18. One milliliter (mL) of the aqueous extract (1%, 2.5%, and 5%) was aseptically poured into sterile petri dishes (9 cm in diameter) followed by the addition of 19 mL of molten potato dextrose agar. After solidification of the medium, mycelial plugs (6 mm in diameter) of A. alternata, H. rostratum, and F. solani from the periphery of 9 days old culture were aseptically inoculated into the center of the petri dishes and incubated at 25±2°C for 7 days. Plates without extract served as controls. The experiments were carried out in triplicates. Percent reduction of mycelial growth was measured using the formula:

Scanning Electron Microscopic Analysis
The morphological changes induced by the extract was assessed using SEM. In brief, small agar pieces (6 mm) were aseptically cut from the inhibition zone and fixed in 2.5% (v/v) glutaraldehyde buffered with 0.1 M sodium phosphate buffer (pH 7.4). The suspension was centrifuged after 48 hours, rinsed thrice with phosphate-buffered saline, and was dehydrated through sequential ethanol washes (60 % – 100%). The dehydrated specimens were freeze-dried and mounted onto stubs using double-sided carbon tape, and then coated with a thin layer of gold. The processed specimens were finally examined under a scanning electron microscope (JSM 6060LV JEOL, Japan LTD).

Structural Characterization by Fourier-Transform Infrared Spectrometry
The dried powder of the aqueous extract of B. carteri was used for Fourier-Transform Infrared (FTIR) analysis. In brief, 10 mg of the dried extract was encapsulated in 100 mg of KBr pellet. The resulting pellet was loaded in the FTIR spectrophotometer (Nicolet 6700, Thermo Scientific, USA) equipped with a beam splitter, a detector (DTGS) and OMNIC software to generate the FTIR spectra in the mid-region of 500 – 4000 cm 1.

Statistical Analysis
The data are expressed as mean and standard deviation (SD). Significant differences were analyzed using one-way analysis of variance (ANOVA). p-value <0.05 was considered statistically significant. As the overall mean difference between the three groups was not significant, post-hoc test was not required.

Antifungal Activity of the Aqueous Extract of B. carteri
The crude aqueous extract of B. carteri showed mild inhibition at 1% concentration against all three fungal strains (A. alternata, H. rostratum, and F. solani), with a percentage inhibition ranging from 18.1% against F. solani to 22.3% against H. rostratum. At 2.5% concentration, it exhibited mild activity against F. solani (22.9%), while, it exhibited moderate activity against H. rostratum (36%), and A. alternata (57.3%). At 5% concentration, it induced moderate inhibition of all three fungal species (Table 1 and Fig. 1a to 1c).

Table (1):
Antifungal activity of the aqueous extract of Boswellia carteri.

Values are presented as means (SD) of triplicates. Fig. 1. In vitro activity of aqueous extract of Boswellia carteri on three phytopathogenic fungi; 1a) A. alternata, 1b) H. rostratum and 1c) F. solani..

Scanning Electron Microscopy
The microphotographs of the untreated mycelia (controls) of A. alternata showed normal tubular structure with intact mycelia (Fig. 2a). The treated A. alternata mycelia appeared distended, flaccid and showed condensed hyphal branches with a rough and wrinkled surface (Fig. 2b). Similarly, distorted structures were noted for H. rostratum and F. solani treated with the aqueous extract of B. carteri (results not shown). 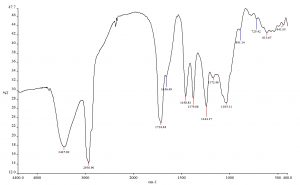 This study showed that the aqueous extract of B. carteri exhibited potent in vitro activity against A. alternata, H. rostratum, and F. solani. SEM confirmed the presence of ultrastructural changes in the mycelia treated with the extract compared with the untreated mycelia. FTIR spectroscopy of the extract showed the presence of various aliphatic and aromatic compounds, which could be responsible for the antifungal activity.

Chemical pesticides have widely been used in contemporary agriculture to control various plant diseases including those caused by pathogenic fungi20. However, the lethal effect exerted by the synthetic fungicides on the soil microbiota, plants, and water coupled with the development of fungicide resistance highlights the need for the development of natural and effective antifungals for combating fungal infections. Plant-based antifungals offer an eco-friendly and effective alternative to conventional synthetic fungicides21.

The arid and semi-arid regions of the Middle East is the home for many medicinal plants22. B. carteri is one of the valuable medicinal plants distributed in the dry mountain areas of the Middle East1. Metabolites derived from oleo-gum resin have been used in the management of myriads of plant diseases23. However, there is a paucity of studies exploring the antifungal activity of B. carteri11,13. In the current study, three different concentrations (1%, 2.5%, and 5%) of the crude aqueous extract of B. carteri were screened against three phytopathogenic fungal species (A. alternata, H. rostratum, and F. solani). With subtle exceptions, the extract of B. carteri showed mild activity at lower concentrations (1% and 2.5%) and moderate activity at 5% concentration against the three fungal species tested. The variations in the antifungal activity of the crude aqueous extract may be due to the differences in concentrations of the bioactive compounds (aliphatic and aromatic compounds) in the crude extract. Other factors ascribed for the differential activity include the extraction method, pH, solubility, volatility, diffusion characteristics in the growth medium, and the tested fungal species1,24.

The SEM photographs of the fungal mycelia treated with the crude aqueous extract of B. carteri showed structural alterations in the mycelial and conidial structures compared with the untreated mycelia, thereby endorsing the antifungal activity of the crude aqueous extract. In general, crude aqueous extracts are a rich source of several bioactive compounds. Exposure to such extracts may result in cellular deformation by inducing loss of water, electrolytes and other vital intracellular components essential for the survival of the fungal cells. The phytochemical screening of crude extract using FTIR spectroscopy revealed the presence of diverse bioactive compounds (aliphatic and aromatic) which could play a vital role in inhibiting the growth of the fungal species.

The antifungal activity of Boswellia species is well established25-27. In the Chaurasia et al. study, the ethanolic extract of B. serrata showed the highest activity against Colletotrichum falcatum compared with chloroform extract. Conversely, the aqueous extract did not show any activity against Colletotrichum falcatum.25 In another study, B. serrata essential oil was found to inhibit the growth of an array of fungal species (Aspergillus brassicola [A. brassicola], A. geophila, A. fumigatus, A. ochraceous, A. terreus, Curvularia tetramera, F. equiseti, F. lateritium, F. oxysporum, F. udum, F. verticillioides, Penicillium citrinum [P. citrinum], and P. expansum) except A. flavus and A. tamarii27. Similarly, the methanolic extract and fractions and sub-fractions of B. dalzielii stem bark were found to exhibit the activity against Candida albicans (C. albicans), P. notatum, and A. niger.26 Limited studies have assessed the antifungal activity of B. carteri11, 13. A Serbian study investigating the antifungal potential of B. carteri essential oils showed variable inhibition of the tested fungal species (A. niger, Stachybotrys chartarum [S. chartarum], and Trichotecium roseum [T. roseum]). While S. chartarum and T. roseum were the most sensitive fungal isolates, A. niger was found to be least susceptible11. In another study, essential oil from B. carteri inhibited the growth of A. niger, C. albicans, and C. neoformans13. The antifungal activity of the essential oil of B. carteri was due to the presence of limonene (22.4%), b-caryophyllene (22.2%), p-cymene (10.0%), d-cadinene (9.4%), and a-copaene (4.8%)13. In line with these findings, FTIR analysis of the crude aqueous extract of B. carteri in the present study showed the presence of several bioactive aliphatic and aromatic compounds (alcohol, carboxylic acid, ester, alkene, alkane and alkyl amine, alkyl halides, halogen and cycloalkane), which may account for the antifungal activity against A. alternata, H. rostratum, and F. solani.

The crude aqueous extract of B. carteri has great potential as a natural antifungal in the treatment of plant phytopathogenic fungi. However, further studies are required to understand the molecular mechanism by which B. carteri extract inhibits the growth of the fungal mycelia.

ACKNOWLEDGMENTS
This research project was supported by a grant from the financial support from the Researchers Supporting Project number (RSP-2019/114), King Saud University, Riyadh, Saudi Arabia. The author would like to extend sincere appreciation for funding this work.

ETHICS STATEMENT
This study did not involve human subjects or animals. Therefore, ethics committee approval was not required for this study.