Staphylococcus aureus exhibits resistance to most of the commonly used antibiotics. Although antibiotics suceptibility studies have been performed on the pathogen isolated from the patient samples, only limited information is available about that of S. aureus isolated from asymptomatic individuals. In this study, S. aureus was isolated from the skin microbiota of the asymptomatic individuals, and  susceptibility of the pathogen against different antibiotics and plant flavonoids was compared to drug-sensitive strain. The minimum inhibitory concentration (MIC) value  and IC50 of the pathogen were calculated against the antibiotics and flavonoids. The susceptibility pattern of the isolated strain showed higher resistance against erythromycin (100 μg mL-1) and vancomycin (25 μg mL-1). Based on the fractional inhibitory concentration index (FICI) values, the combinatory effects of antibiotics and flavonoids were categorized into synergistic, additive, and indifferent. The combination of rutin and erythromycin showed a synergistic effect with the concentrations of 31.25 μg mL-1 and 1.562 μg mL-1 against drug-sensitive strains of S. aureus. Similarly, the same combination showed synergistic effects against isolated strains at the concentration of 625 μg mL-1 and 12.5 μg mL-1.We observed an increase in drug resistance in the isolated strain of S. aureus in comparison to the drug-sensitive strain. To the best of our knowledge, this was the first study reporting increase in antimicrobial resistance of S. aureus present on asymptomatic individuals than the sensitive strain.

The abuses in drug usage lead to the acquired antimicrobial resistance to many pathogens, including S. aureus. The biofilm-ability of S. aureus during the infection increases its tolerance against most of the available antimicrobials10-11. The biofilm prevents phagocytosis; thus establishing chronic infections12. The skin microbiota of healthy individuals harbors a significant amount of S. aureus. A recent study showed that non-clinical isolates of S. aureus exhibited antimicrobial resistance13-14. The carriage of drug-resistant strains in healthy individuals becomes a major asymptomatic reservoir, which can rapidly spread infection within the community15.

As all the commercially available drugs are ineffective in treating the drug-resistance pathogens, alternative approaches for effective treatments should be developed. The combination of drug treatments with flavonoids and conventional antibiotics could control the multidrug-resistant pathogens more effectively16-18. Flavonoids are secondary metabolites produced in different parts of the plant, and it exhibit antimicrobial activity against a broad range of pathogens. Also, flavonoid based treatments are effective in controlling the biofilm formation in antibiotics resistant S. aureus. The plant metabolites reinforce the antibiotics to enhance their efficacy in the combination treatments19. The naringenin and sophora G inhibit the multidrug-resistant S. aureus (MRSA) by reducing the fluidity of the cellular membranes20. Quercetin, rutin, and salidroside disturb the cellular membrane’s integrity and biofilm formation of various pathogens21. Quercetin and antibiotics exhibited superior inhibitory effects on S. aureus. In these combinatory treatments, the flavonoids increase the cell permeability, increasing the uptake of the antibiotic by the pathogen22.

The earlier studies had reported the effect of combinatory treatments on the clinically isolated strains of S. aureus and MRSA. In this study, we have compared the drug susceptibility patterns between drug-sensitive strains of S. aureus and isolated strains from healthy individuals. Further, the study evaluated the synergistic effects of different flavonoids with antibiotics against both strains.

Antimicrobials, Media, and Culture
All the antibiotics (erythromycin, vancomycin, tetracycline, rifampicin, and gentamicin), and flavonoids (quercetin, rutin, morin, and naringenin) were purchased from Himedia Laboratories Pvt. Ltd., Mumbai, India. The stock solution of antibiotics and flavonoids were prepared in the respective solvents. The drug-sensitive strain S. aureus (MTCC96) was purchased from Microbial Type Culture Collection and Gene Bank (MTCC), Chandigarh, India. The bacterial strain was cultured on mannitol salt agar (MSA). The Mueller-Hinton broth was used to determine the susceptibility analysis and synergistic effects using checkerboard assay. All the media were procured from Himedia Laboratories, India.

Isolation of Staphylococcus aureusf rom asymptomatic individuals
A total of 15 healthy volunteers were chosen for the isolation of S. aureus from their skin. S. aureus cultured in the MSA, which is the selective and differential medium for isolating and identifying S. aureus. The MSA contains 1% mannitol, 7.5% sodium chloride, phenol red indicator, and peptone. S. aureus can tolerate and survive in the high salt condition in this medium. In contrast, other bacteria’s growth is inhibited owing to the high salt concentration of the media. S. aureus can produce the acid end product by fermenting mannitol sugar in the media, which changes the phenol red indicator into yellow. In this experiment, the suspected single bacterial colony was inoculated on an MSA plate (Oxoid, Basingstoke, UK) incubated at 35°C for 24 h, and colour change of the indicator was observed. Furthermore, the genomic DNA was isolated from the selected S. aureus, and the 16s rRNA gene sequencing method was used for the species confirmation.

Antimicrobial s usceptibility of S. aureus
The susceptibility of drug-sensitive and clinical isolates against antimicrobials (antibiotics and flavonoids) was compared using the broth micro-dilution method as per the clinical and laboratory standard institute (CLSI) guidelines23-24. The stock solutions of the antibiotics (100μgmL-1– 0.78μg mL-1) and flavonoids (2 mg mL-1 – 0.015mg mL-1)were prepared in the appropriate solvents. The bacterial suspensions with 5x 108 colony forming units (CFU mL-1) concentration were prepared by diluting the bacteria in Muller Hinton broth (MHB) and added into the 96-well plate. The bacterial suspension in each row was added with a varying dilution of specific antimicrobials .The antimicrobials were added upto eight fold dilution from the stock concentration. Then, the cultures were incubated at 37°C for 24 h. After the incubation, 20μL of resazurin dye with concentration of 0.15mg mL-1 was added to each well, and incubated at 37°C for 4 h. The pink color indicated the live cells, whereas the blue color indicated dead cells. The color change was used to estimate the bacterial growth of the pathogen. For fluorescence-based detection, fluorescence with excitation and emission at 530 nm /590 nm was measured25. All the experiments were performed in triplicate.

Synergistic effects of flavonoids and antibiotics on planktonic cells
The synergistic effects of a different combination of flavonoids and antibiotics were evaluated using the checkerboard assay study26. The 64 different concentrations of antibiotics and flavonoids ranged between 4X MICand 1/32X MIC values were prepared in MHB broth and tested for it combinatory inhibitory effects. Briefly, the S. aureus was added to the plate at a final concentration of 1.5x 108 colony forming units (CFU mL-1). The different concentration of anitbiotics (1/32X -4X MIC) were added at each column of the 96-well plate (column III to column X). Similarly, different concentration of flavonoids were added in each row (row to row VIII). The MHB broth was used as the negative control,and bacterial culture without antibiotics or flavonoids was used as positive control. After incubating at 37°C for 24 h, 20μL of the resazurin dye (0.15mg mL-1) was added to each well. The plate was again incubated at 37°C for 4 h. The fluorescence absorbance of the dye was measured at excitation (530nm) and emission (590nm). The change of color from dark blue to pink is indicated the metabolic activeness of the culture. As described above, the MIC values of antibiotics and flavonoids in the combinations were evaluated using the above resazurin dye-based method.

The synergistic effect of the drug combinations was tested by calculating the Fractional inhibitory concentration index (FICI) as mentioned below: FICIA+B = FICA + FICB, where FICA = MICAcombi/MICAalone and FICB = MICBcombi/MICBalone. The MICAcombi and MICBcombi are the MIC values of drug A in combination, while MICAalone and MICBalone are the individual MIC values. The effect of the drug combinations was catagorized into different groups based on the FICI values (Table 2): FICI ≤0.5 showed the synergistic effect; FICI range between >0.5 and ≤1.0 showed the additive or partial effect; FICI value range between >1.0 and ≤4.0 showed the indifferent effect, and FIC > 4 showed the antagonistic effect27-28.

Isolation of S aureus from asymptomatic individuals
The isolated strains of S. aureus from the skin microbiota of asymptomatic individuals were grown in MSA medium. Mannitol fermentation produces an acid, which is detected by phenol red pH indicator. Since the Staphylococcus aureus is mannitol fermenting organism, it produces yellow-colored colonies in the MSA medium, while the other Staphylococcus species are unable to ferment mannitol. Furthermore, the DNA sequencing of the 16s rRNA gene was confirmed the S. aureus.

Antimicrobial Susceptibility profiling of S. aureus
The broth dilution method was used to determine the MIC of four flavonoids and five antibiotics against planktonic cells of S. aureus of drug-sensitive (MTCC96) and non-clinical isolated strain. The plant flavonoids quercetin, rutin and morin have been found to posses the antibactericidal activity The MIC values were determined for the aforementioned antimicrobial individually and in combination. The individual MIC values showed that the non-clinical isolates were more resistant than the drug-sensitive strain. The non-clinical isolated strain had 16-fold higher MIC values (100 μg mL-1) for erythromycin than the drug-sensitive strain (6.25 μg mL-1). Also,other antibiotics had a two – four fold increase in MIC for the non-clinical isolates (Table 1). Even plant flavonoids showed a similar increase in MIC values for the non-clinical isolates. Rutin and morin had a 10-fold increase in MIC values, with rutin posses the highest MIC among the other flavonoids (Table 1). Only naringenin showed equal MIC for both strains. The drug response effect of each antibiotics and flavonoids was measured at different concentrations to calculate antimicrobial concentration to the achieve the 50% of maximal inhibition (IC50)30 Fig. 1). Even the IC50 values showed that the concentrations of antibiotics required to inhibit the growth of the isolated strain of S. aureus are higher (Table 1). 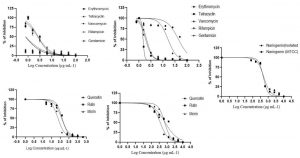 Most of the population is colonized asymptomatically by S. aureus in the regions of nares, skin, and rectal areas31. Carriage of S. aureus rarely causes disease in healthy individuals, but it is associated with an increased risk for the emergence of infections in various populations32-34. A previous report on antimicrobial susceptibility pattern of S. aureus isolated from the nosal carriage in pre-school childrens showed resistance to β-lactum antibiotics35. A study compared the antimicrobial resistance of S. aureus from nasal carriage and clinical samples. The clinical isolates exhibited higher resistance for aminoglycosides, while carrier isolates had higher resistances against quinolones and tetracycline36. However, no reported study to compare the susceptibility pattern between the skin microbiota and drug-sensitvitive strain. Also, this study reported an increase in resistance to non-clinical isolates of S. aureus against both antibiotics and plant flavonoids, which is alarming. The combinatory treatement would be a more appropriate method in controlling the acquired antimicriobial resistnance.

S. aureus forms the colonizes in the nasal passage and axillae of humans. The suceptability pattern against antibiotics and flavonoids was evaluated for S. aureus from the asymptomatic individuals. The MIC and IC50 values indicated an increase in resistance in non-clinical isolates in comparision with drug-sensitive against all the antibiotics and flavonoids. The 16-fold increased MIC values of erythromycin and two-four fold MIC of other antibiotics was observed for non-clinical isolates. Except naringenin, all other flavonoids had increased MIC values for isolated strain. In non-clinical isolates, the synergistic effects were found between erythromycin with most of the flavonoids, whereas the vancomycin shows only the additive effects with flavonoids. The combinatory treatments with flavonoids reduced the the required MIC of antibiotics upto 4-16-fold in combination than that of individual treatment .The study shows that the combinatory treatment of flavonoids are an effective approach to overcome bacterial resistance.

ACKNOWLEDGMENTS
We would like to acknowledge the SRM Institute of Science and Technology, TamilNadu, India, for their financial support and facilities to carry out this project. We would also like to thank Osheen Sharma, Department of Genetic Engineering, SRM Institute of Science and Technology for doing statistical analysis and data interpretation.